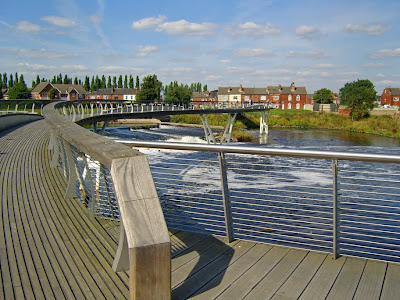 At last, I've found an opportunity to visit Castleford Bridge. This new footbridge over the River Aire in Castleford, Yorkshire, was the subject of a Channel 4 TV documentary that I discussed here a couple of years ago. It's one of the best British footbridge designs of the last few years, and I had been keen for some time to see how the reality compared to pretty photographs.

The bridge is the jewel in the crown of a wider town regeneration scheme, intended to bring investment into a town which once relied on the mining industry, as well as to help promote a more confident spirit amongst local residents. On a practical level, the footways on the only older bridge over the river were (and are) very narrow, and the new structure offered improved connectivity to the houses on the north bank of the river.

An invited competition was held in 2003, won by McDowell + Benedetti. As my previous post recounts, the bridge design eventually taken forward bears little resemblance to the one that won the competition, a floating bridge which could never survive the river's heavy floods. 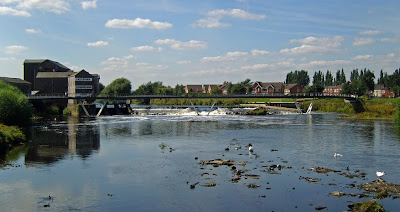 The final design is 131m long, with a 4m wide deck. There are four 26m long main spans supported on V-shaped steel legs, with 9m across the top of each V.

The deck and lean rails are made from Cumaru hardwood, with the deck planks supported on fins from two steel box girders, one 500mm by 400mm, and the other rising to a maximum of 1000mm deep at midspan in a "finback" arrangement. This box is hidden below timber so that it also provides seating. Skateboarding along the seating is discouraged with a series of stainless steel "armrests". I've borrowed a sectional visualisation from World Architecture News which makes the form of construction a bit clearer (as with all my images, click on it for a larger version).

The preliminary structural design was undertaken by Alan Baxter & Associates. The bridge opened in July 2008, built by Costain, with detailed design by Tony Gee and Partners.

Channel 4 presenter Kevin McCloud heavily criticised the decision to adopt the design-and-build procurement route, saying in 2006: "I find it extraordinary that having done all this work, having prepared all this stuff, [design] is all squeezed out. The contractors and sub-contractors are provided with the minimum amount of information and effectively asked to redesign it from scratch." 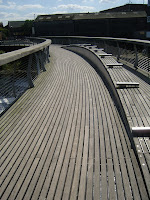 Having seen some of the architect's early visualisations for the bridge, I find it hard to tell what has changed in the final design, although the support legs may be a little different and I believe the lighting units below the parapet handrails are of a cheaper design. McCloud's complaint seems exaggerated.

So, what makes the design so good, or at least, so interesting? Much of the attractiveness of the bridge comes from it sinuous layout, an S-shaped curve that meanders across the wide part of the river called "Castleford Bay". It makes the most of the opportunity for the bridge to be a space to visit rather than just a means to cross an obstacle. It's a promenade on which to stop and admire the view (the frothy weir to one side, and the older arched highway bridge on the other), or to sit and converse. 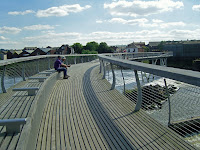 The extensive use of timber gives the bridge an informal feel, as does the shaping of the pier legs, with use of steel which is curved and varying in section. It's high-tech, but with a more organic sense than much high-tech steel bridge design. The lean rails are nice and wide, enhancing the idea that it's a place to stop and stare.

The curved deck seats, hiding the structural beams, are a very succcessful element. It's a good way to disguise most of the structural depth on what is structurally a fairly straightforward beam bridge. 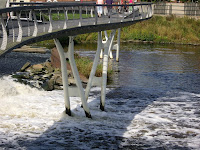 I do wonder about the strength of the pier legs though, if they were to be impacted by large debris in flood conditions. They are also curiously blackened at their bases, presumably a result of abrasion from material in the river, and it's hard to see how this will be anything but a huge maintenance problem.

I'm also unclear quite how the bridge articulates - the top of the pier legs is hinged perpendicular to the bridge alignment - is there a hinge at the base of the legs as well? The bridge has guide bearings at its abutments, again aligned parallel to the bridge alignment, and I would have thought this combination of restraints would lead to twisting movements under thermal expansion. 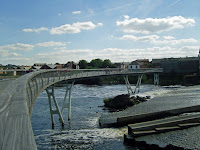 However, perhaps the strangest thing about the bridge is its amazing attraction to spiders. Pretty much every part of the parapet was covered in spider-web (with accompanying spiders) when I visited - what makes it such an attractive home to them? (And why can't the bridge owner keep a supposed tourist attraction free of spider webs?)

For me, these points don't detract from what's easily one of my favourite footbridge designs of recent years.

Posted by The Happy Pontist at 9:11 PM

I love that bridge!
I wish I could see it up close but spider cooties, oh my.

I think it's spider season, one or two weeks at the end of the summer where everything goes web-crazy.

I too wonder about the damage at the base of the supports - strange that the design didn't incoporate any deflection fin bisecting the current.