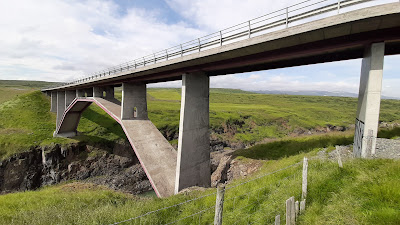 There are many arch bridges in Iceland, but this is probably one of the more unusual ones.

Built in 1994, this bridge is 125.5m long, with a main span of 70m. The steel-concrete composite road deck is supported on the arch via slender piers at 14m spacing. 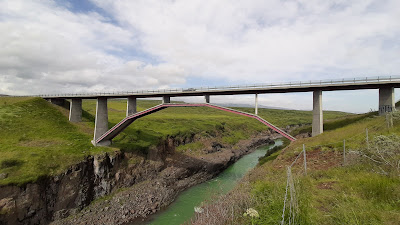 The bridge is unusual for the arch being of composite construction, with a concrete slab supported on two steel box girders, and for its angular form. In the UK, we'd describe it as a "thrupenny-bit" profile. This solution was chosen over girder and framed options for aesthetic reasons, although studies showed a steel frame bridge to be slightly less expensive.

The composite form was chosen to eliminate the need for falsework as far as possible. The steel girders were erected first, and used to support 150mm thick prefabricated concrete panels. A further layer of in-situ concrete was then poured to create an arch 300mm thick in total. The width of the arch varies from 4.4m at the crown to 6.4m at its springings.

The bending stiffness of the arch and deck are similar, so in the finished bridge, they both resist asymmetrical bending equally.

The construction sequence had to be considered very carefully to ensure that the very slender arch remained stable at all stages - the construction photo below (taken from a technical paper describing the bridge's design and construction) shows quite how slender it appeared. 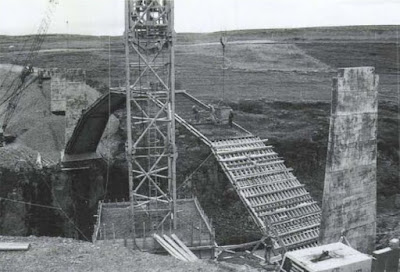 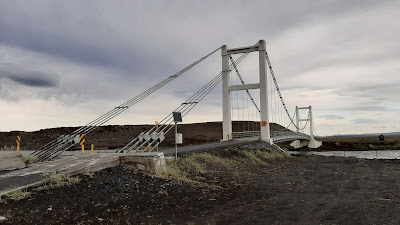 My journey took me east from the previous two bridges, following the Route 1 highway.

Iceland is well-supplied with large rivers, carrying meltwater from icecaps and glaciers. The Jökulsá á Fjöllum river appears wide but relatively unspectacular. However, the volume of water is substantial, as can be seen around 20 km to the north where the river spills over the enormous Dettifoss, reportedly Europe's largest waterfall.

Before there was a bridge here, the river could only be crossed by a ferry. The bridge was built in 1947, one of a number of suspension bridges completed within a 12 year period from 1945 to 1957, following Iceland's independence from Denmark.

The bridge is 171m long, with a main span 102m long and 3.7m wide. The steel ropes were supplied by British Ropes Ltd, and the steelwork was supplied and erected by Dorman Long.

The Icelandic roads authority have been planning a new bridge a little to the south of the existing structure, on the grounds that the existing bridge requires both speed and weight restrictions (lorries are forbidden by signs from travelling in convoy across the bridge). The new structure is proposed as a 5-span concrete box girder bridge, 230m long. Construction was due to start in 2015, but evidently it has been delayed. 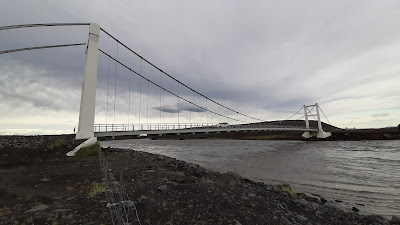 Iceland Bridges: 2. Road bridge over Skjálfandafljót at Fosshóll on Route 1 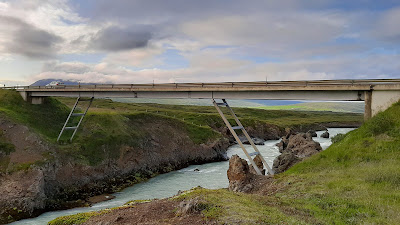 This bridge was built across the Skjálfandafljót river in 1972, replacing an older truss bridge dating from 1930. The older bridge (and the remains of its 19th-century predecessor) can be seen in the photo at the end of this post.

Today, this structure carries Route 1, the main Icelandic ring road. Like many bridges in the country, it is only a single lane wide, although reportedly the national highway authority is considering building a new 2-lane bridge immediately to the north of this span.

As with many bridges in Iceland, it can best be described as pragmatic. The ladder-like inclined legs allow the main bridge girders to be more economical in size. 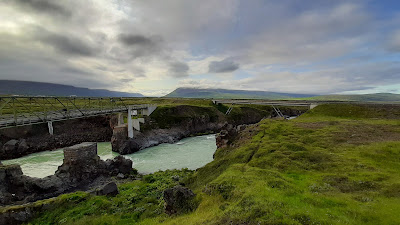 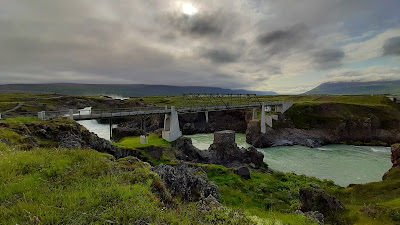 I visited Iceland earlier this year, and stopped briefly at a few bridges while there.

This first structure was previously a highway bridge spanning the River Skjálfandafljót. It carried Iceland's main ring road (Route 1) until a new bridge was built in 1972. The older bridge has been retained today as a pedestrian bridge.

The steel truss bridge was built in 1930, and replaced a previous wooden bridge dating from 1882-83. You can see the remains of the older bridge in the photos.

This must be one of the most-seen footbridges in Iceland, not because it is of any great interest itself, but because it is just downstream of the spectacular waterfall, Goðafoss. It provides a pedestrian link between car parking areas on each side of the river. 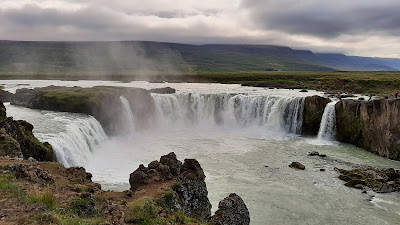 Posted by The Happy Pontist at 8:25 PM No comments: