This is the last bridge from various trips around the North of England that I'll cover here for a while. I have various bridges in London, Wales and France that I want to get onto next. 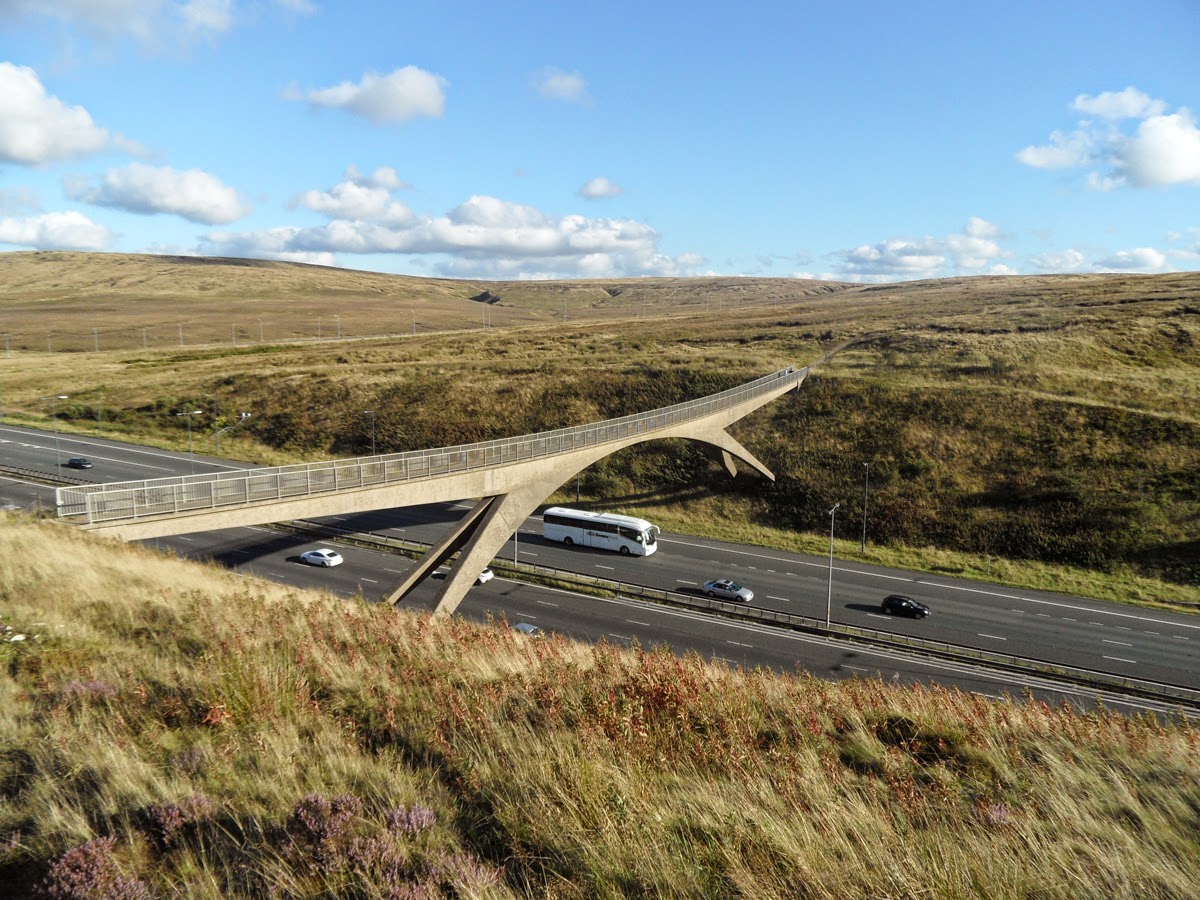 The Pennine Way Footbridge forms part of a set with Wentbridge Viaduct, Droppingwell Footbridge, Smithy Wood Footbridge, Needle Eye Bridge, and Scammonden Bridge. The link is that all were designed by the highly productive and creative West Riding County Council during the 1960s as part of major expansions of the motorway and A-road network. 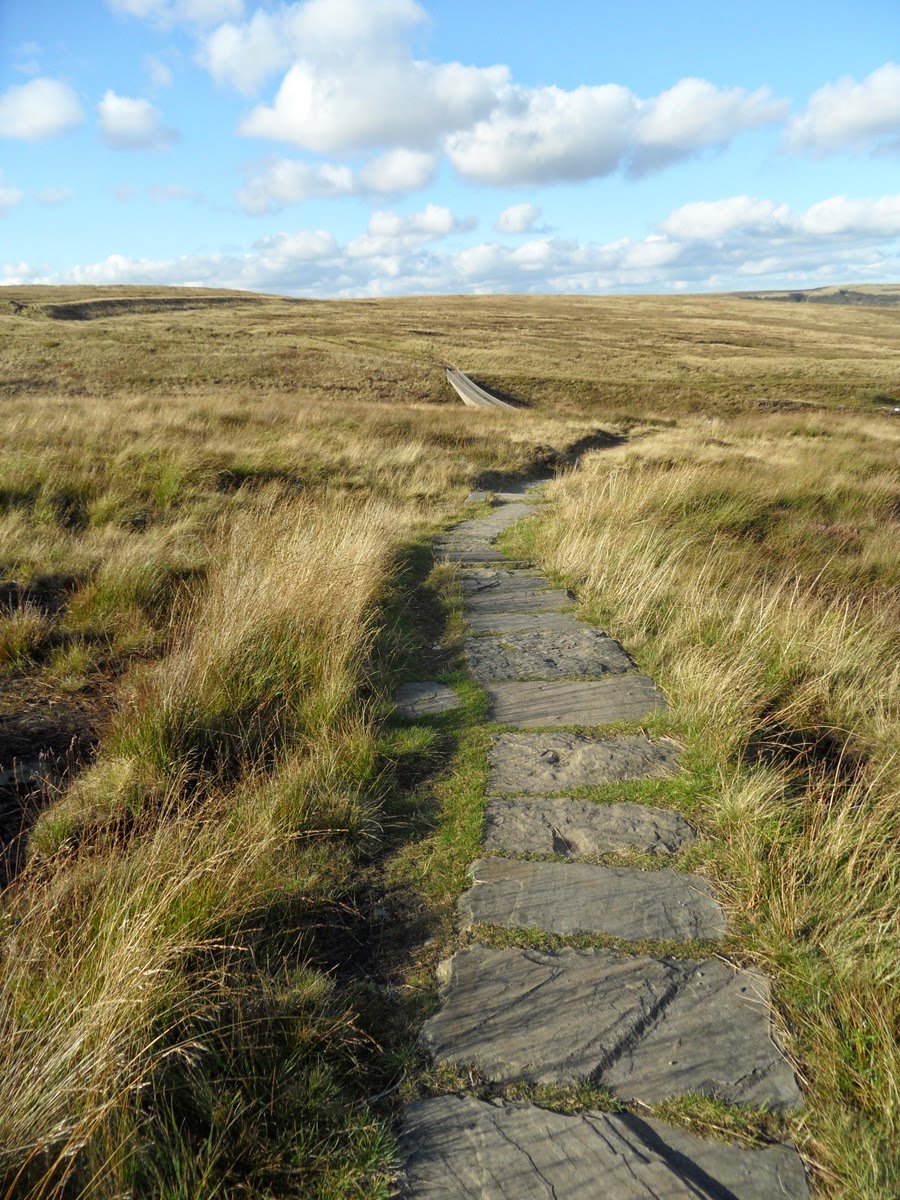 The footbridge was built to preserve a walking route over the M62 motorway, where the highway enters a deep cutting on the western edge of the Pennines. Approaching it along the footpath from the south, you can hear the motorway before you see the bridge, a sound much like a waterfall in a canyon. The bridge is glimpsed across the moors but not properly seen until close to the crest of the cutting, where the dull roar of sound reveals itself to be a cascade of cars and lorries tumbling westwards towards Manchester. 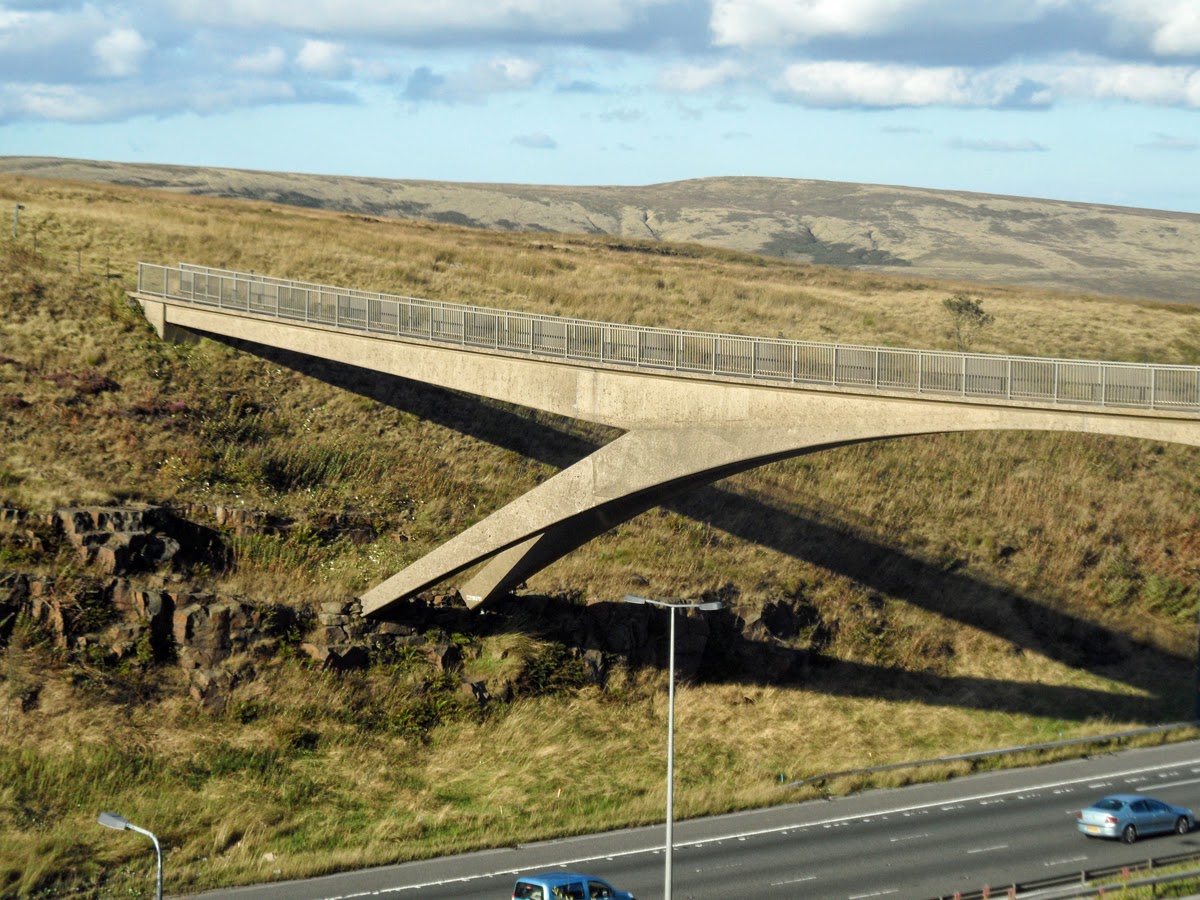 Spanning 67m, the facts of the bridge are prosaic. It is a three-hinged reinforced concrete arch, with prestressed propped cantilevers carrying most of the deck. Similarities with the Droppingwell and Needle Eye bridges are obvious, and there's another very similar bridge near Leeds which I hope to visit on another occasion. The Swanscombe Cutting Footbridge in Kent is another point of comparison, the only bridge of this type in Britain which holds Listed status. 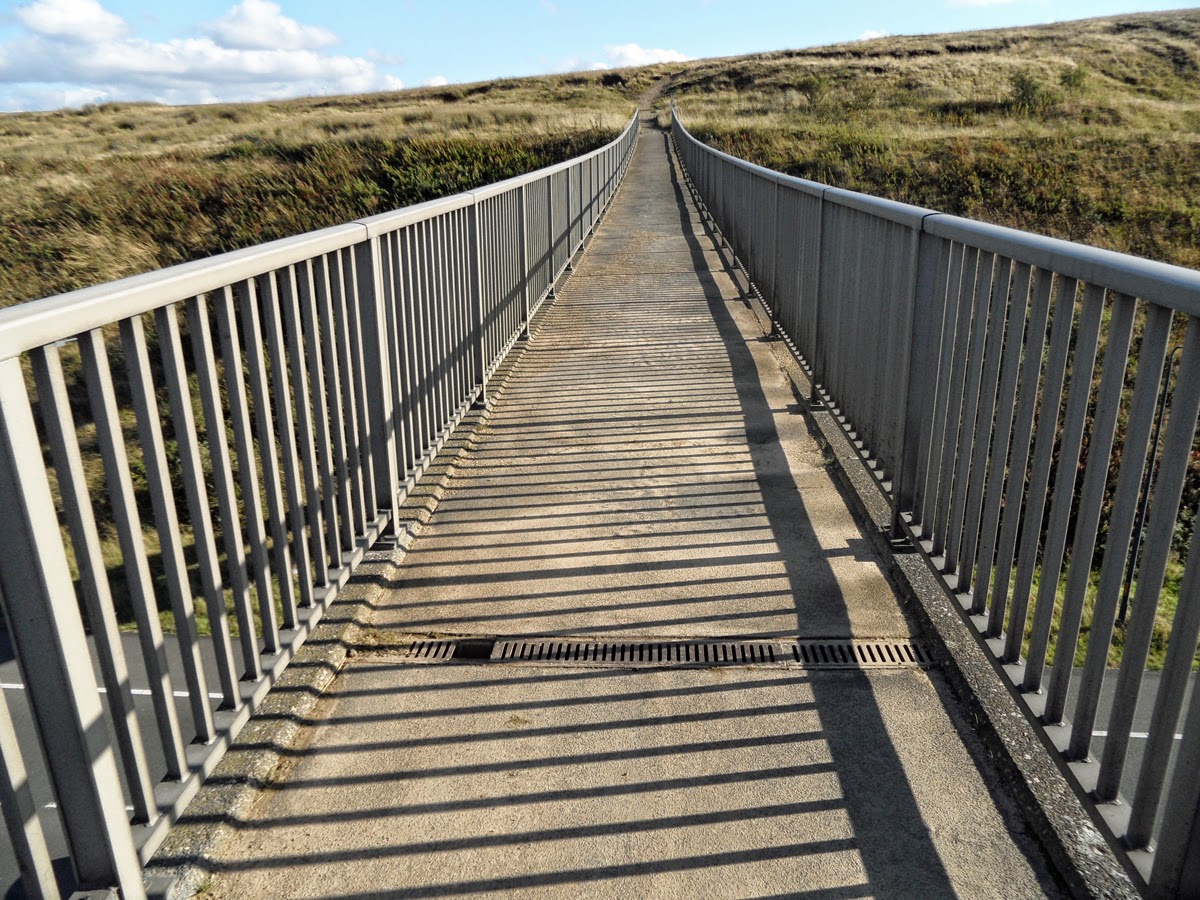 I think the Pennine Way bridge is the only example of its kind (in the UK at least) where the deck follows a sag curve. At first sight, this is a disconcerting choice, especially viewed from the motorway, but it makes perfect sense when seeing the footpath in context. It's interesting to wonder whether, if it had been built a few years later, a stress ribbon solution would have been considered, as was done within a decade at Hope in Derbyshire. 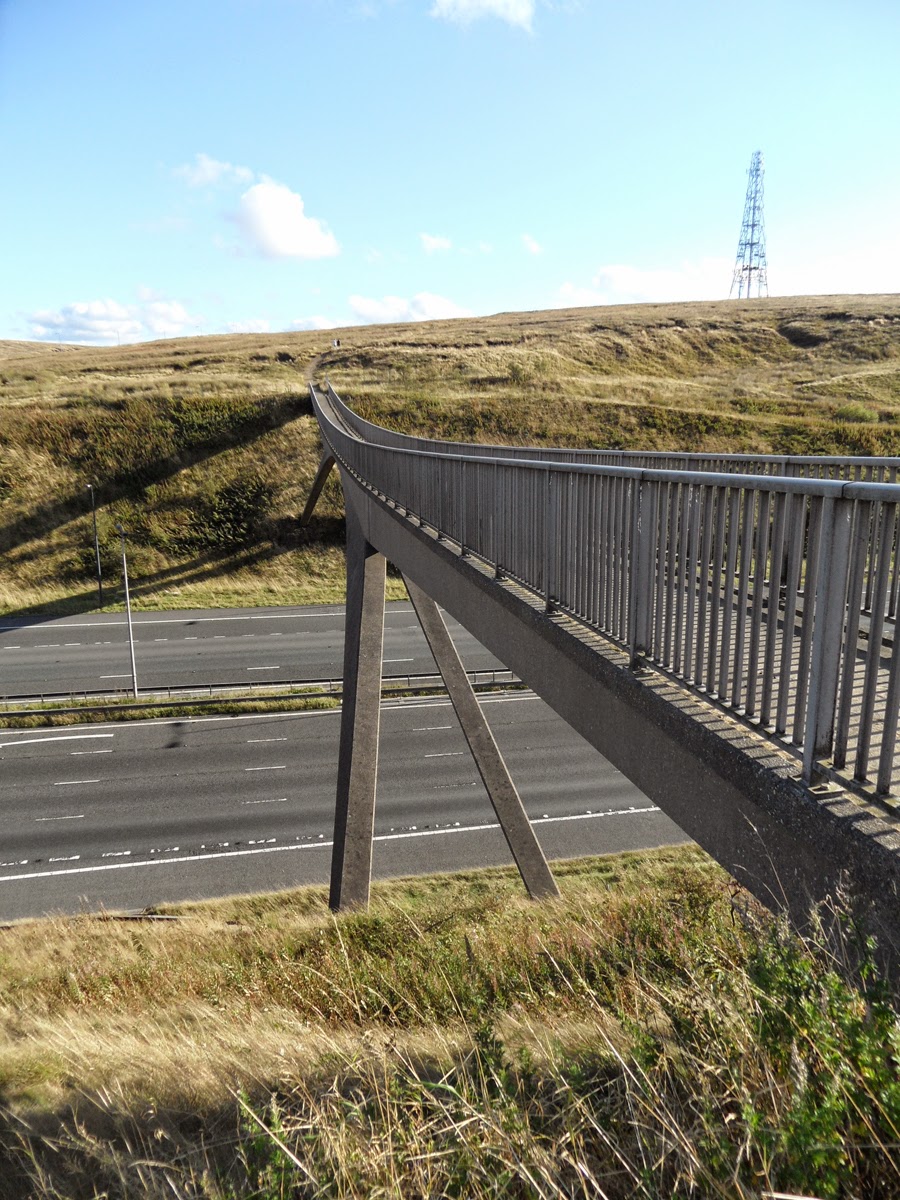 I find the bridge to be extremely elegant. The counter-curved lines of the arch and the deck sit well together, and all the concrete elements are particularly slender. The legs of the arch split below the deck to provide lateral stability. The bridge is not beautiful from all angles, but it's hard to find much to fault with it. It is little more than it needs to be, and its geometry has been chosen with great care. 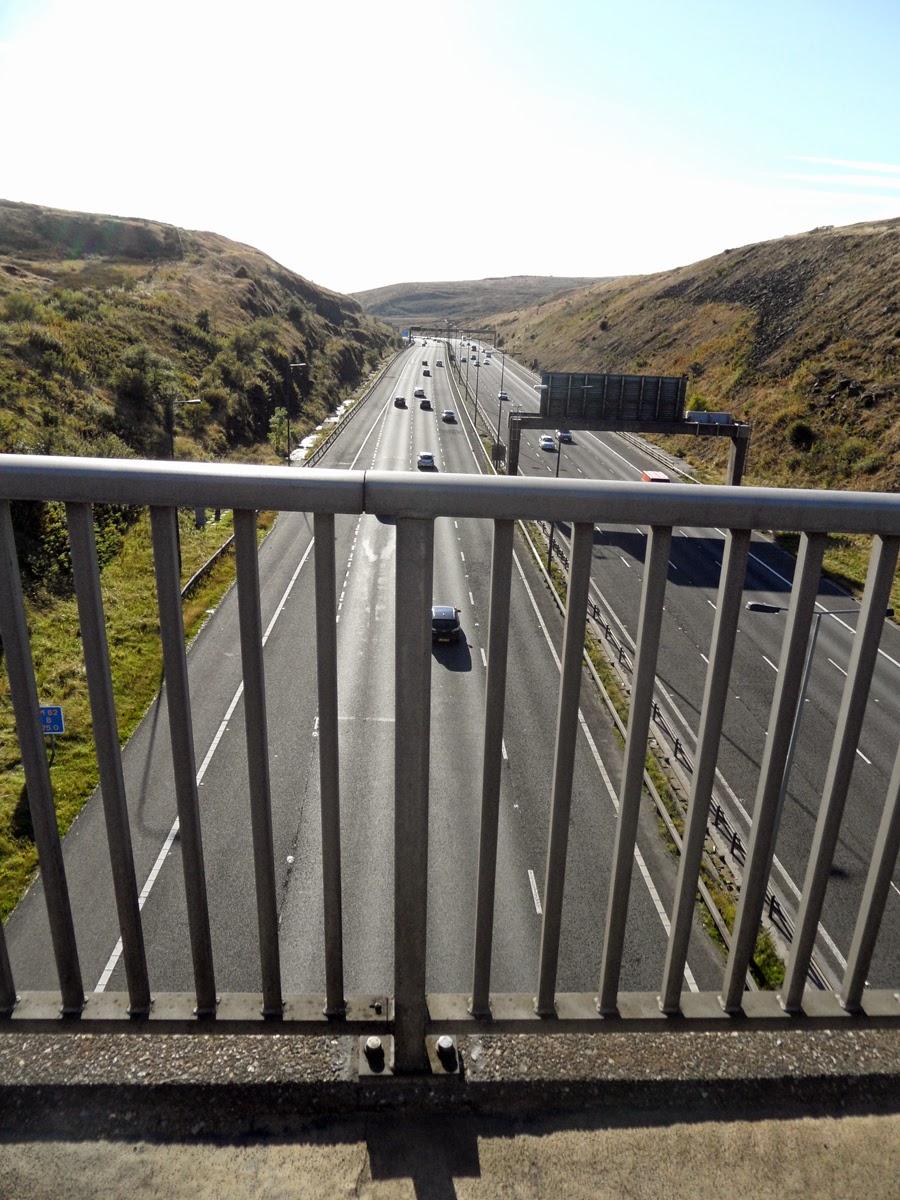 The parapet is made of aluminium, and has lasted far better than the painted steel parapet on the Scammonden Bridge (the next bridge above the M62 to the east). Because the deck falls towards its centre, the deck includes a drainage slot above its central hinge, which presumably drains to ground through the arch legs. 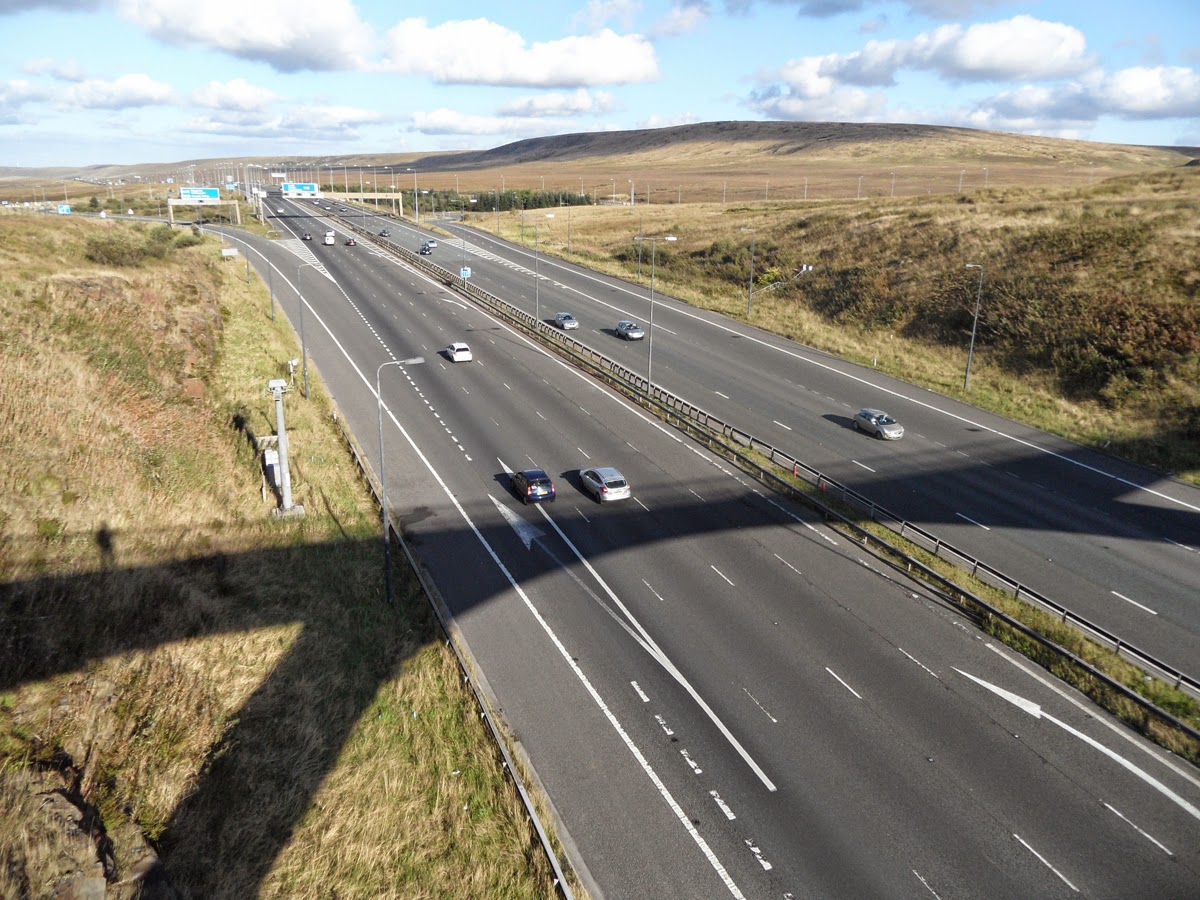 The bridge throws a sharp and striking shadow across the landscape. This is a supremely difficult location for a bridge, acting as a gateway between Lancashire and Yorkshire, and between the slopes to the west and the broad moorland to the east. It sits well at such an aesthetically sensitive location. 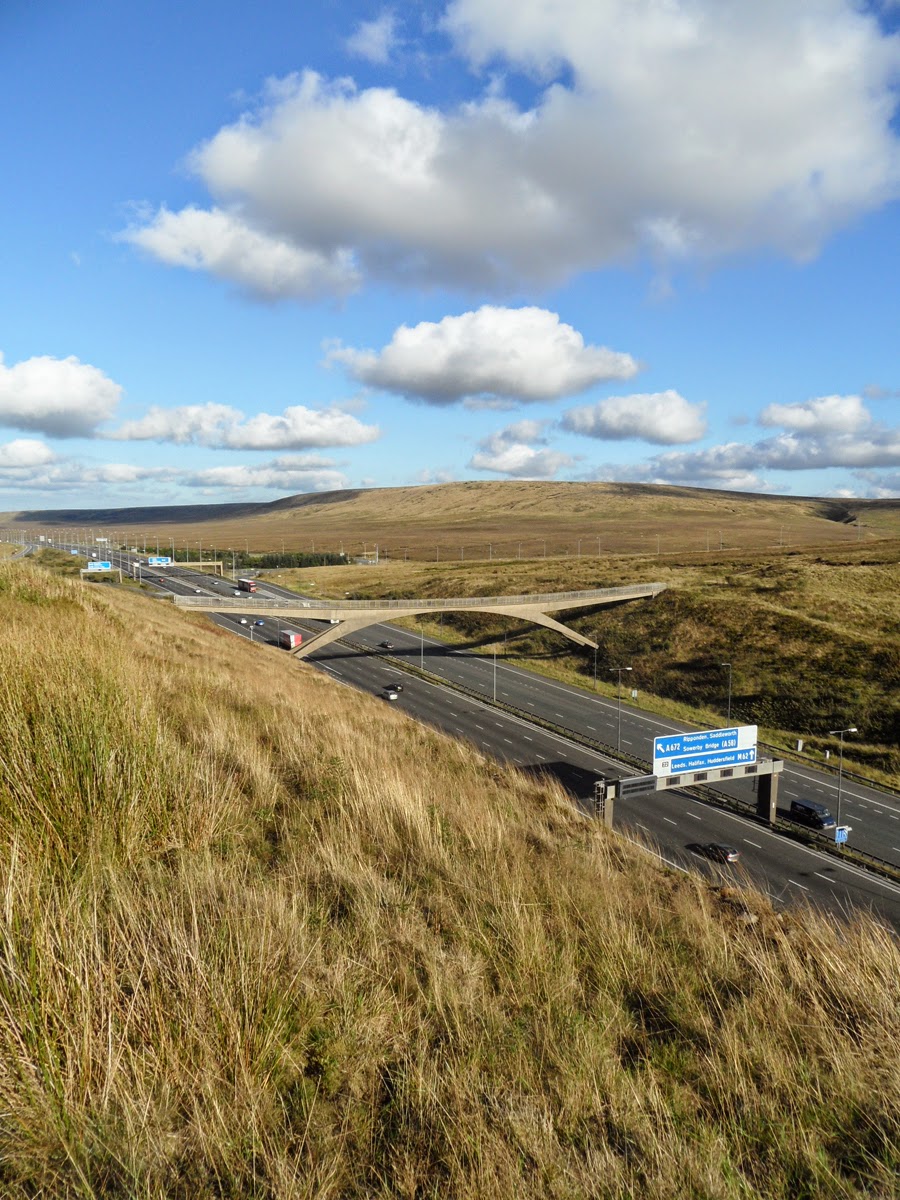 Perhaps the only thing I would criticise is not the bridge itself, but the careless positioning of motorway furniture around it. In particular, a large traffic sign on the eastbound approach spoils views of the bridge along the motorway. The bridge is not unique in this respect, with the Highways Agency and their forebears generally giving little or no consideration to how the motorway as a whole system should be treated aesthetically.

TripAdvisor reckons this imposing railway viaduct is in the top 30 out of over 400 visitor attractions in North Yorkshire. That's some distinction for an elderly railway bridge situated far from significant towns and cities amidst the windswept moors.

Ribblehead Viaduct is the largest and probably the most famous structure on the Settle to Carlisle Railway. As with the rest of the line, it was built to the design of John Sydney Crossley.

The bridge comprises 24 brick arches, with stone spandrel walls, supported on 6-foot thick stone-faced piers. Every sixth pier is 18-foot thick, and acts as a "bookend" which would in theory allow part of the viaduct to stand up even if the arches on the other side were to collapse. This is a common feature on large viaducts of this type.

The photographs show bands of black and red brickwork. I believe the red brick has been re-cased as part of extensive repair works undertaken in the early 1990s. Some of these repairs are illustrated on the Settle and Carlisle Railway Trust website.

Several pattress plates can be seen which anchor tie bars across the arch barrels. These have been installed at some point to restrain outward movement of the spandrel walls. Photos from the repair works show longitudinal cracks in the arch barrels along the lines of the spandrels, associated with this movement.

New drainage downpipes can be seen on the piers, and the top level of these corresponds to the backing material that sits above the piers and between each of the arch barrels. This backing is essential to the stability of the arches.

Projecting stones are visible at height on each of the piers which will have originally been used to support the temporary timber centering upon which each arch was erected.

The bridge's main attraction is its setting amidst pretty bleak moorland. 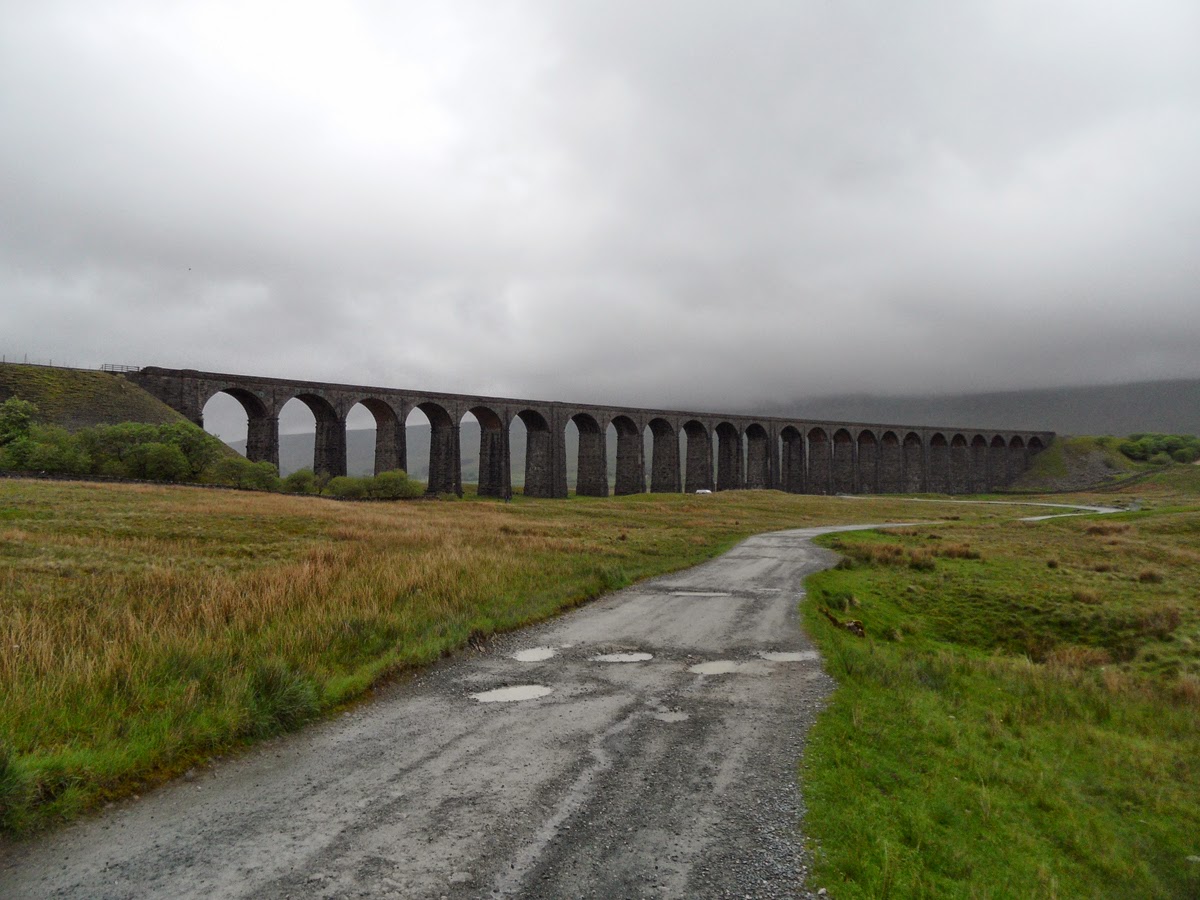 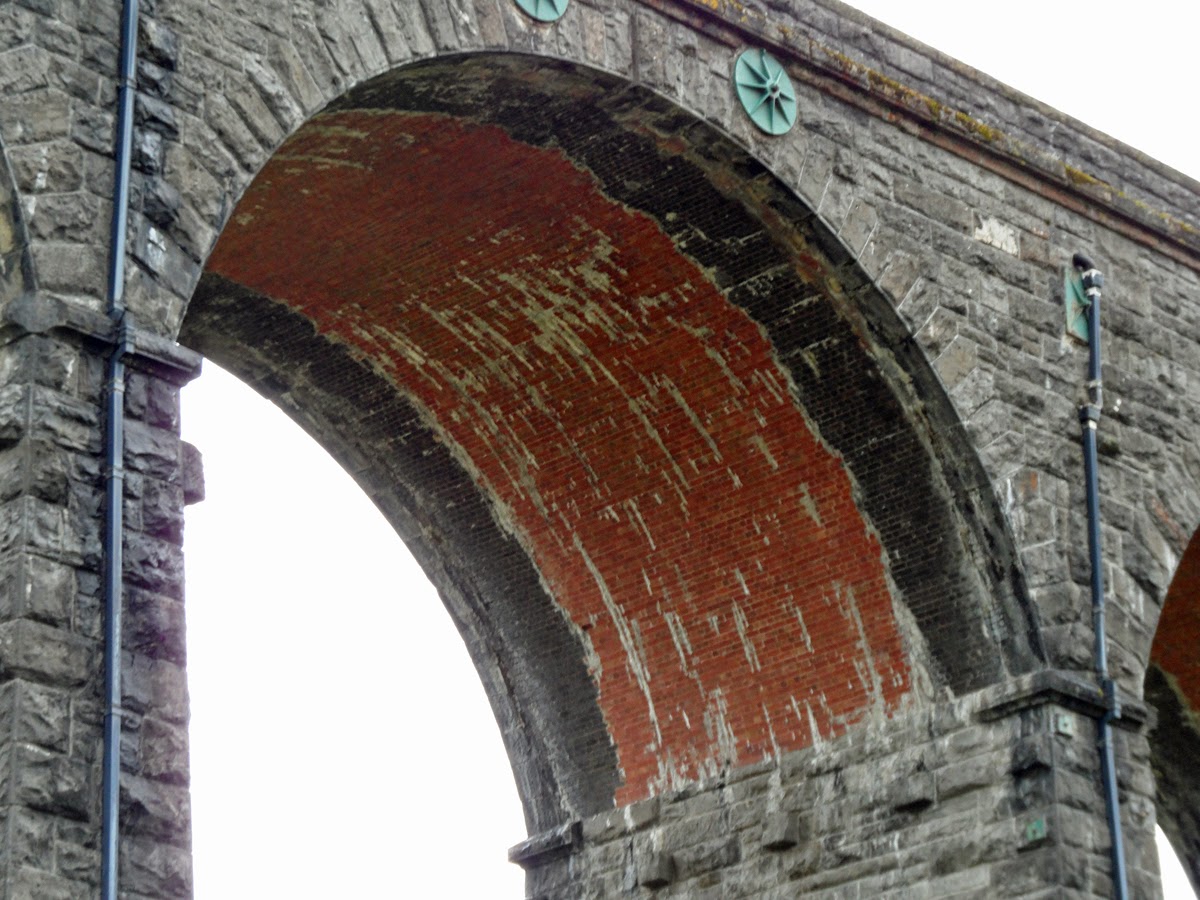 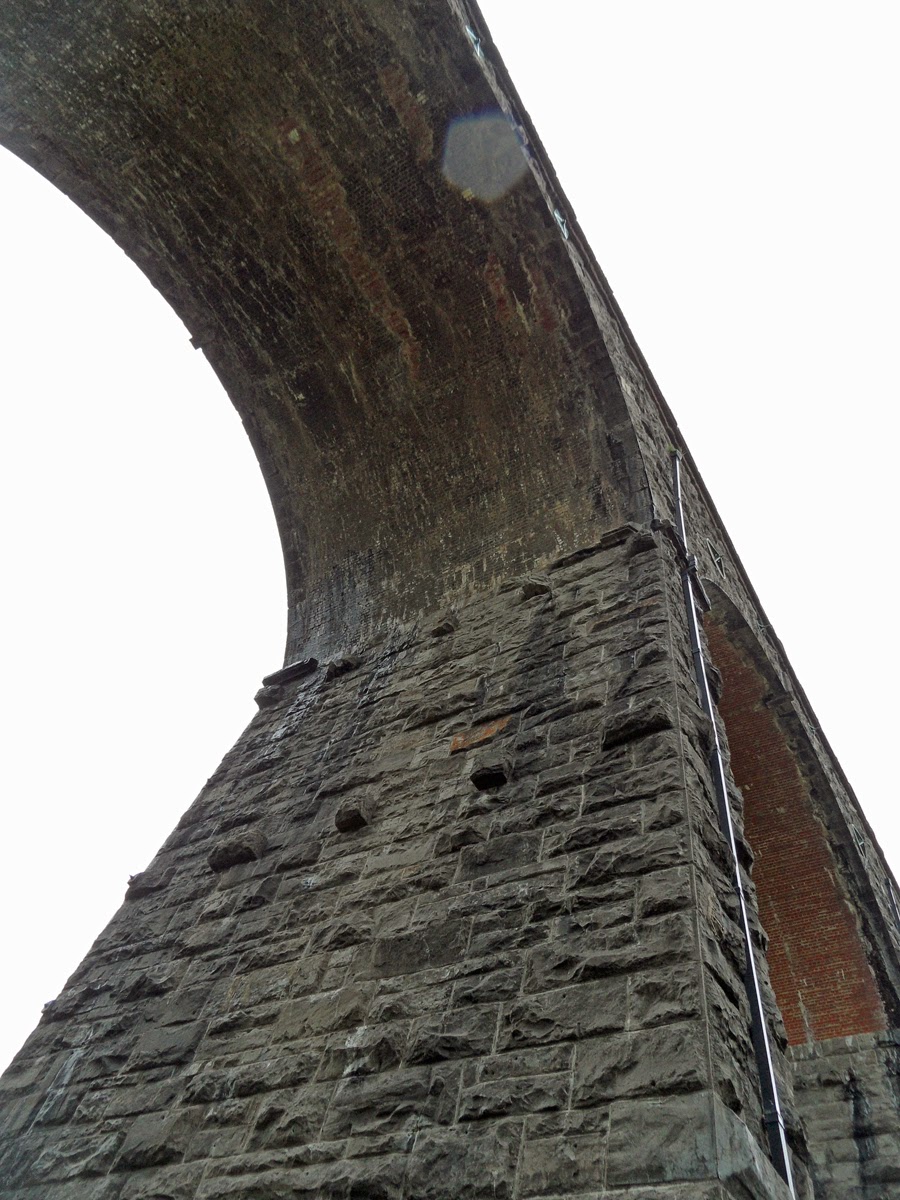 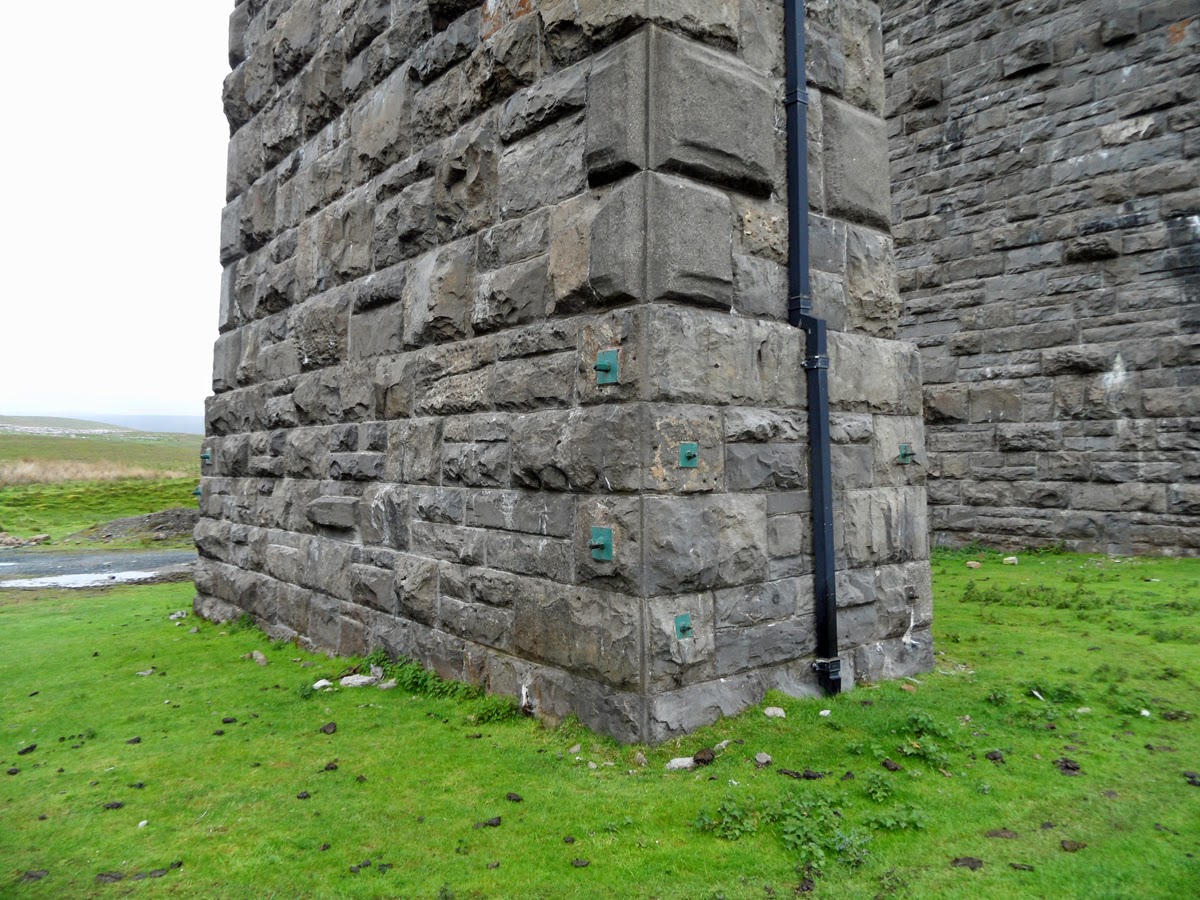 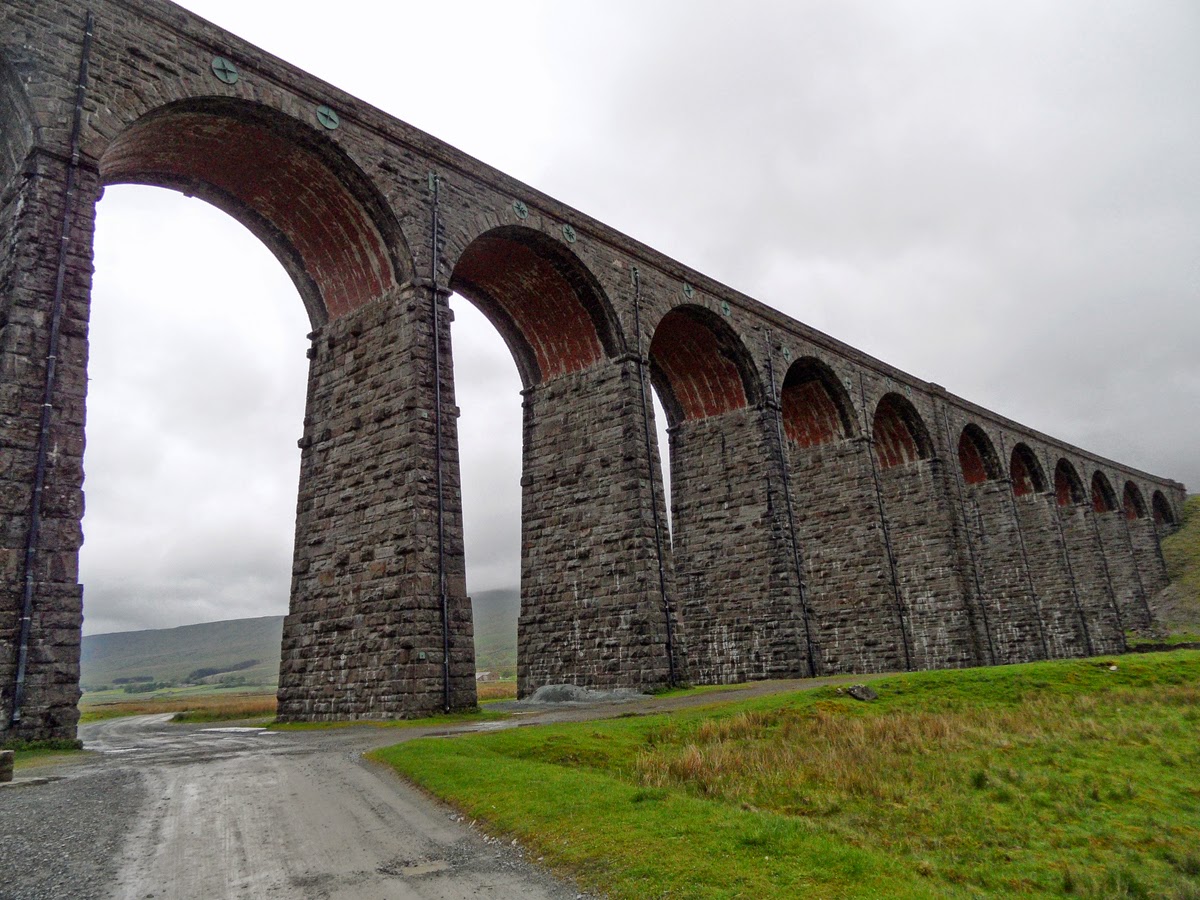 Posted by The Happy Pontist at 12:07 PM No comments:

This is the last of the bridges on the River Lune that I visited earlier this year - continuing further downstream you would come to the Lune Millennium Bridge, but I have featured that previously.

The first bridge at the site of the Greyhound Bridge was a timber viaduct, built in 1849 to carry rail traffic to Morecambe. This was replaced in the 1860s with a more durable wrought iron structure, and then replaced again in 1911 with the riveted steel bridge that remains there today.

In the 1960s, the rail line was closed as part of the Beeching rail cuts, and in 1971-2 the bridge was converted to carry a highway and reopened. I can't readily think of other examples where this has happened. The diagram below shows how the bridge was altered: 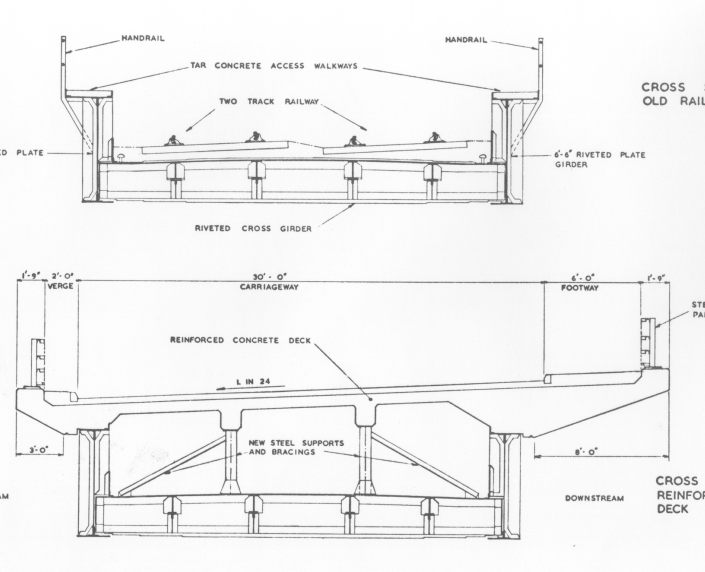 The bridge's steel girders rest on cross-braced steel tubular caissons. The reinforced concrete highway deck was propped off the existing bridge crossframes with a series of steel stools, and cantilevers considerably beyond the original deck width. The works were designed by C. S. Allot and Son, later part of Allot and Lomax, and now absorbed (via Babtie) into the Jacobs empire. 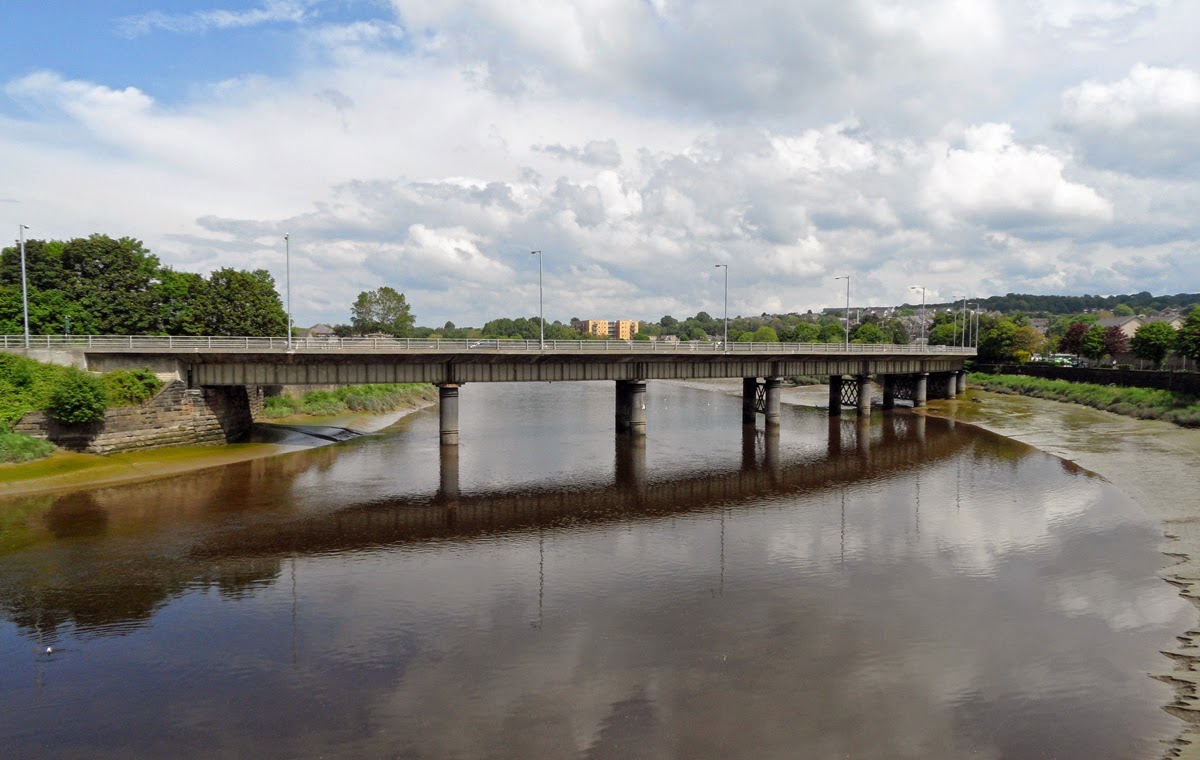 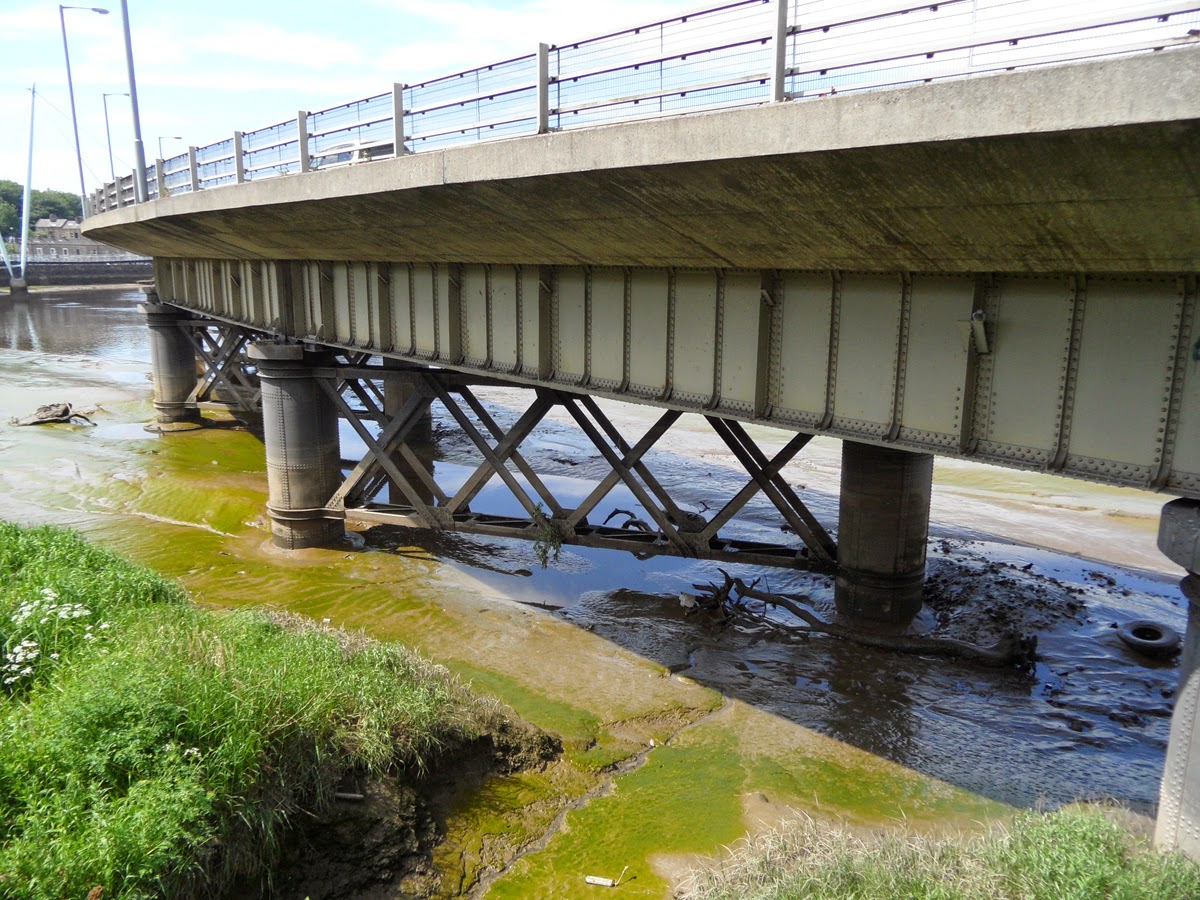 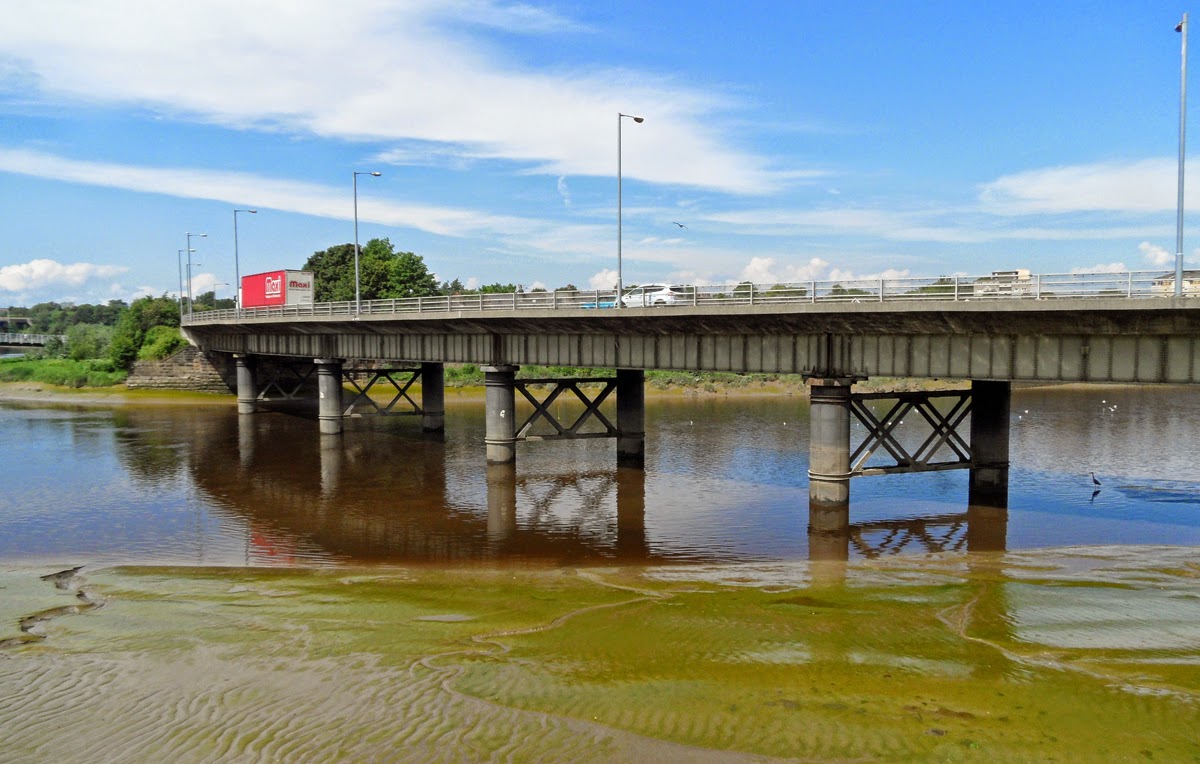 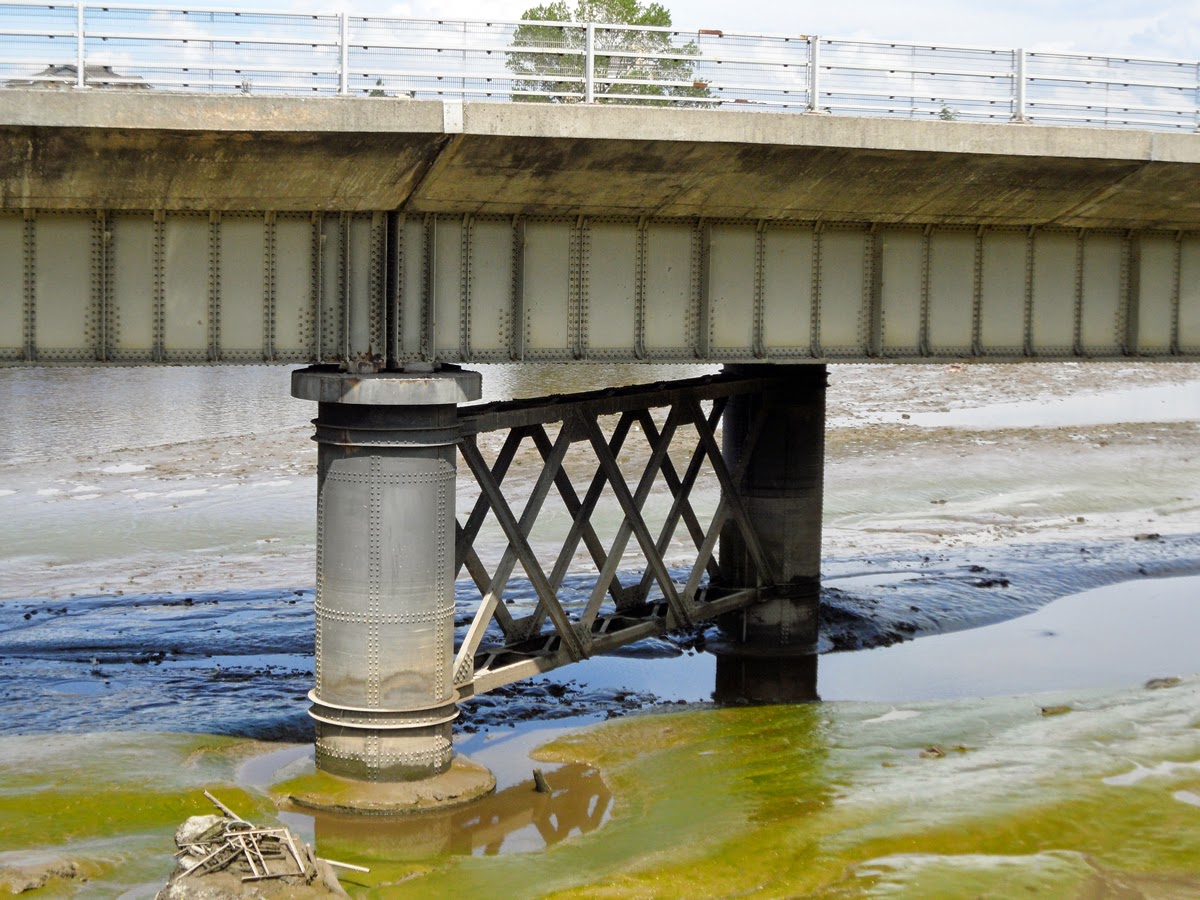 Posted by The Happy Pontist at 9:41 PM No comments:

Skerton Bridge was built in 1787 to a design by Thomas Harrison. It makes for an interesting comparison with the Lune Aqueduct, completed in 1796.

Harrison's bridge was a replacement for the first bridge over the River Lune at Lancaster, a wooden bridge which dated as far back as the 13th century. This bridge had been rebuilt and repaired on numerous occasions, and in the 18th century was part-demolished to prevent Scottish rebels from crossing the river.

Harrison's new bridge was built for £14,000, and consisted of five elliptical stone arches, later extended with a further span across a railway at its southern end. It was notable for its level highway. Although it predates Rennie's Lune Aqueduct by nearly a decade, it is by far the more elegant of the two bridges.

The bridge is Listed Grade II*, and I particulary enjoy the Listing description:


"5 gracefully shallow semi-elliptical arches with archbands, and above the semicircular cutwaters between them are aediculed niches with mutuled pediments and engaged Tuscan columns. The whole is crossed by a cornice with mutules, and a balustraded parapet in which plain panels alternate with groups of 6 balusters." 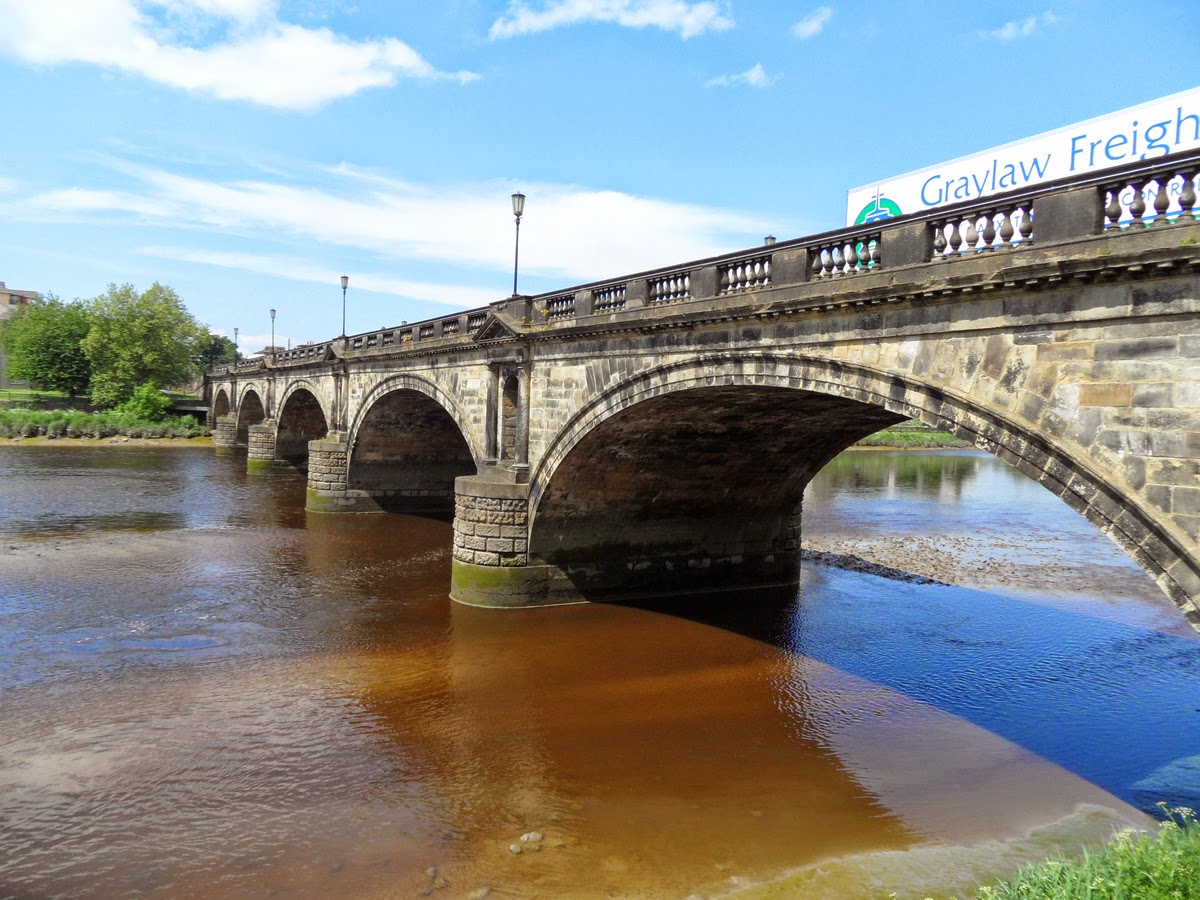 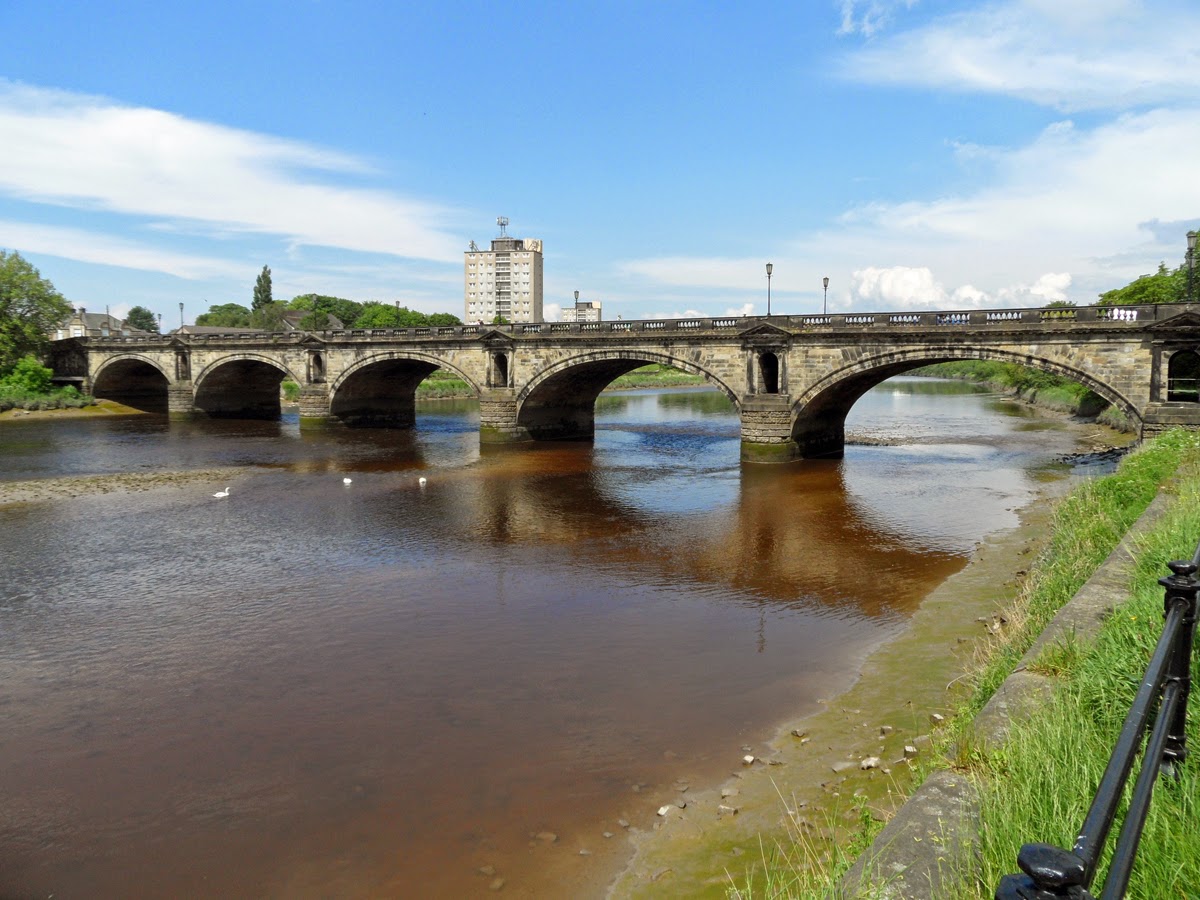 Posted by The Happy Pontist at 10:38 PM No comments:

Lune Aqueduct has been referred to as a "wonder" and a "masterpiece". Engineering Timelines calls it "architecturally the finest aqueduct in north west England". Completed in 1796, it carries the Lancaster Canal above the River Lune. It was designed by John Rennie and is now Listed Grade I.

The bridge is monumental rather than elegant. The large semi-circular arches are one cause of this, as are the wide stone piers. It gives the impression it could stand forever, although of course it has required extensive repairs in the recent past. 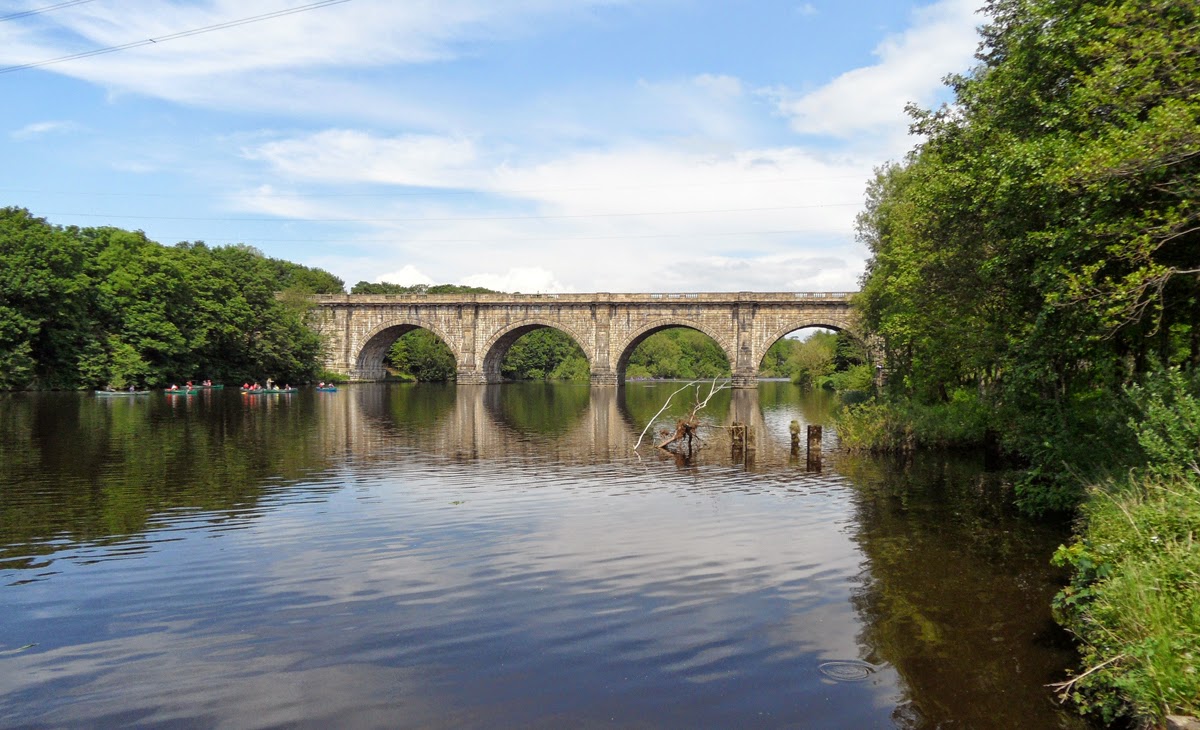 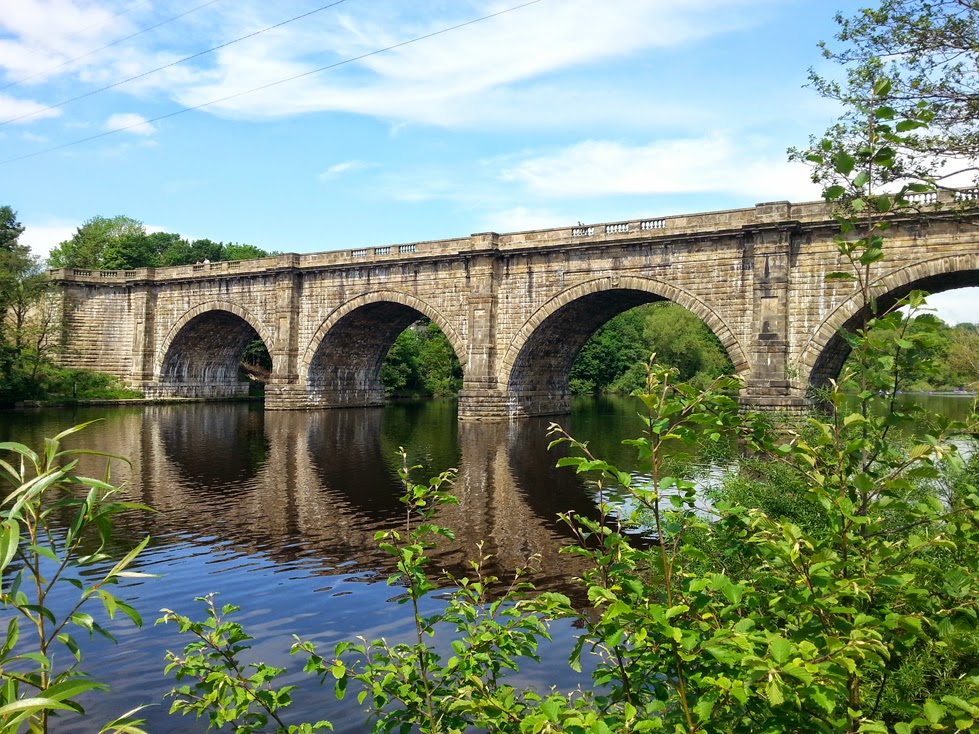 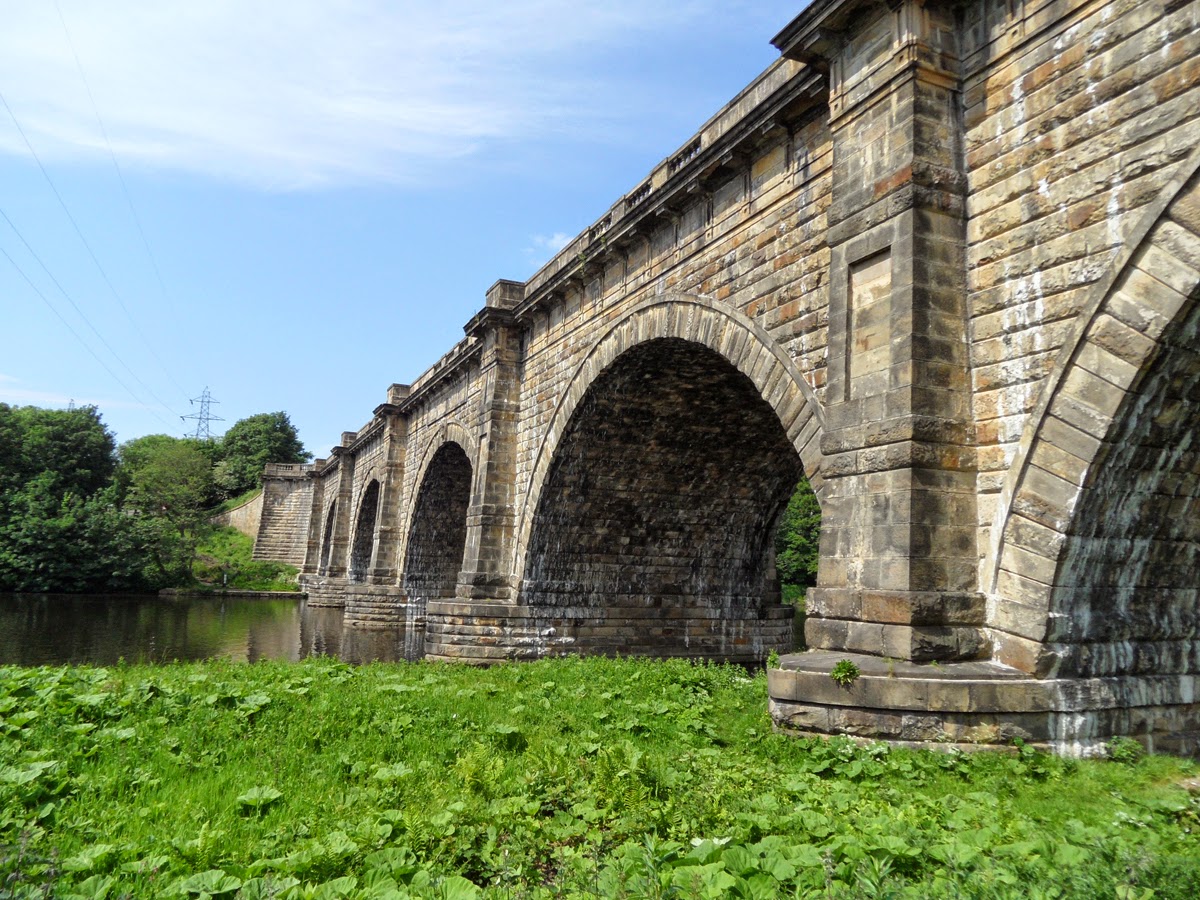 This bridge is something of mystery: I've been able to find nothing of any significance about it either in my library or on the internet. I don't know when it was built, or why, or who designed or built it. If you have answers, please post in the comments!

It is a single-lane highway bridge, operated without traffic lights. It consists of two metal lattice girders at the edges of the deck, each with two planes of lattice web. The bottom chord of each truss, and any crossbeams, are encased within a concrete deck slab.

The superstructure is supported from a series of cross-braced metal trestle piers. These have inclined legs on the upstream side to protect them against impact from river-borne debris.

The metalwork is riveted, which dates the original bridge construction to 1960 or so at the very latest, and probably much earlier. A bridge of broadly similar construction at Heatherslaw Mill in Northumberland dates to the 1870s. 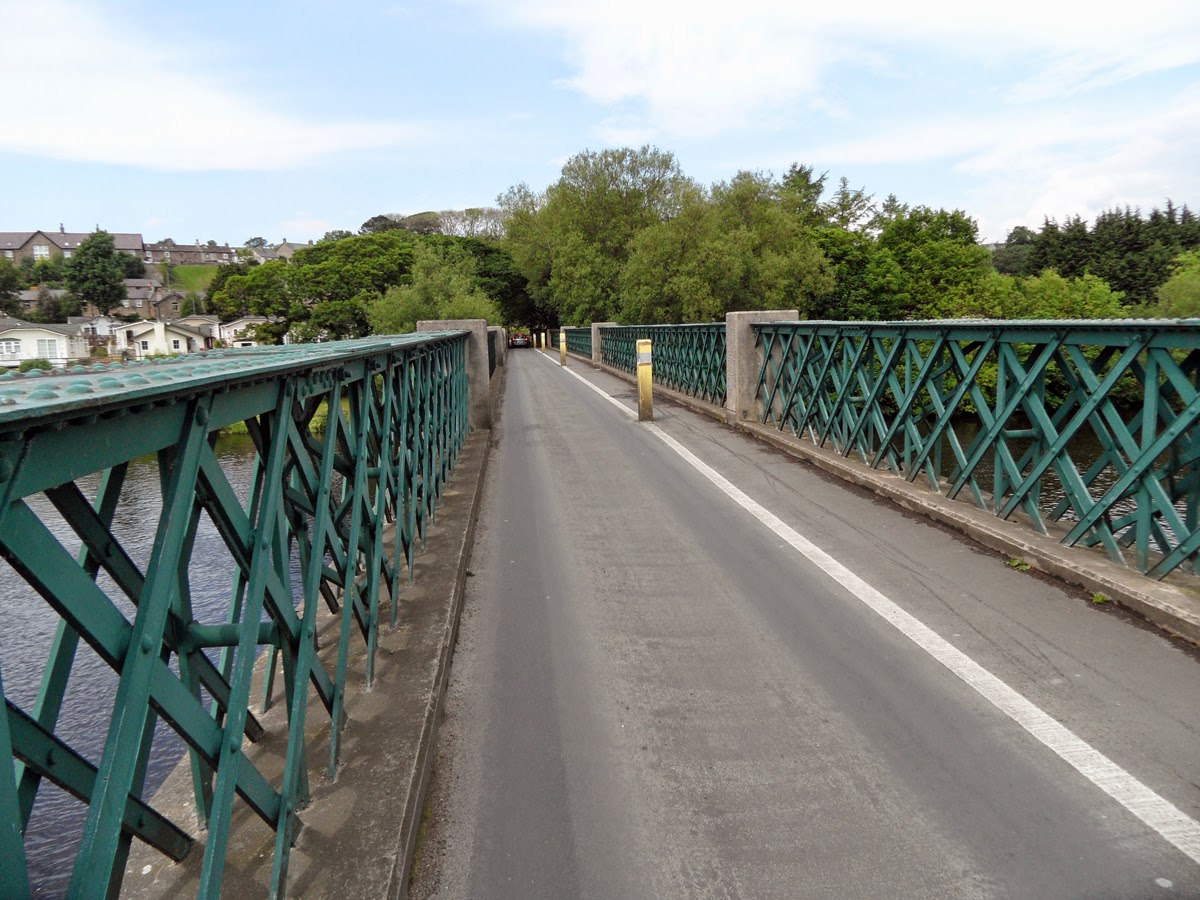 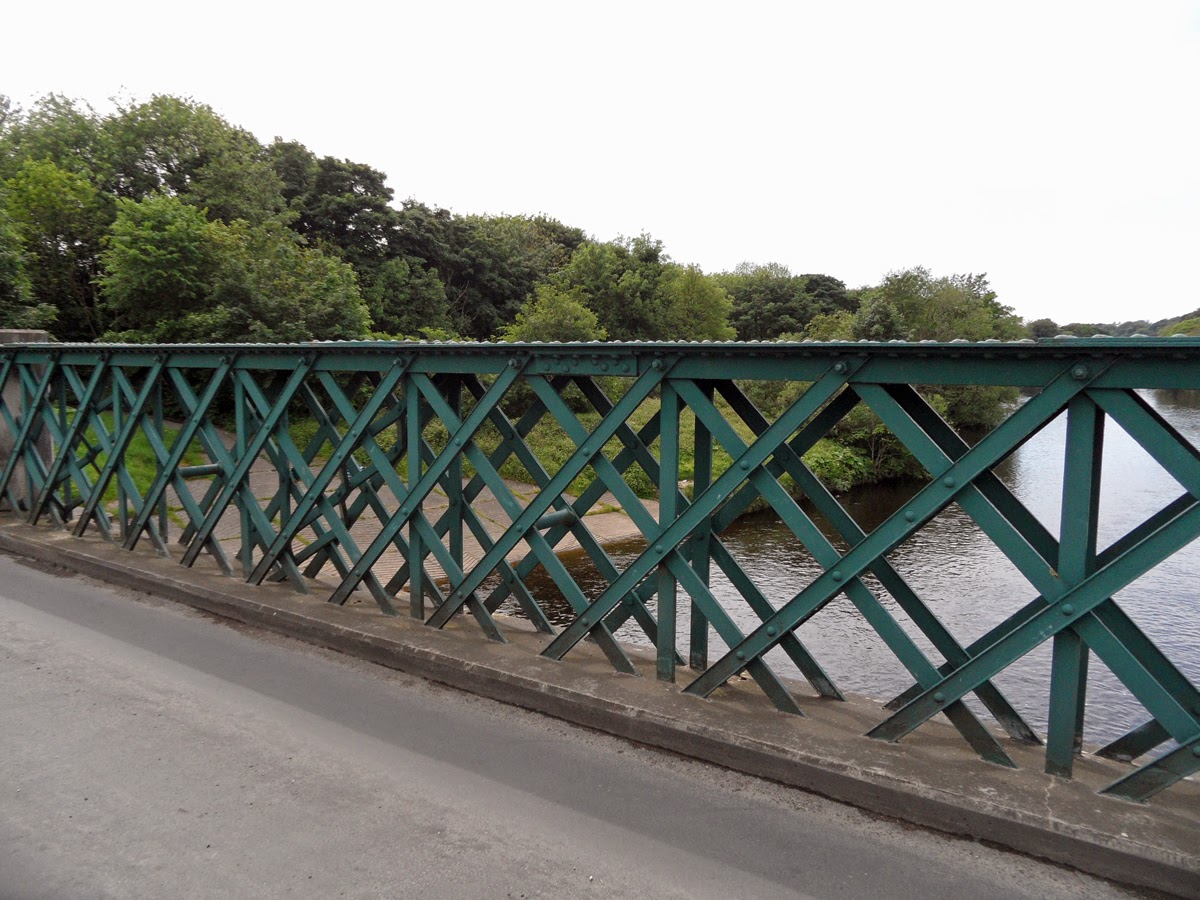 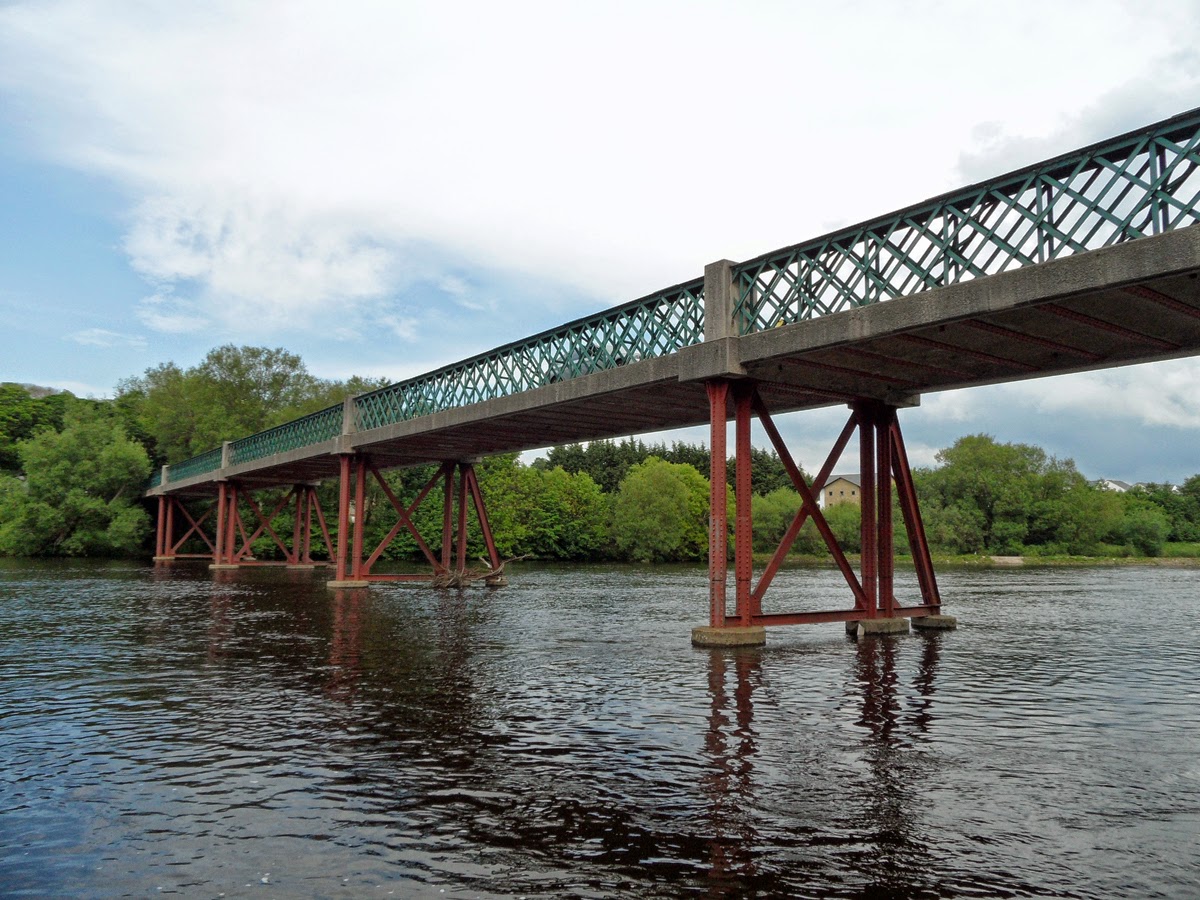 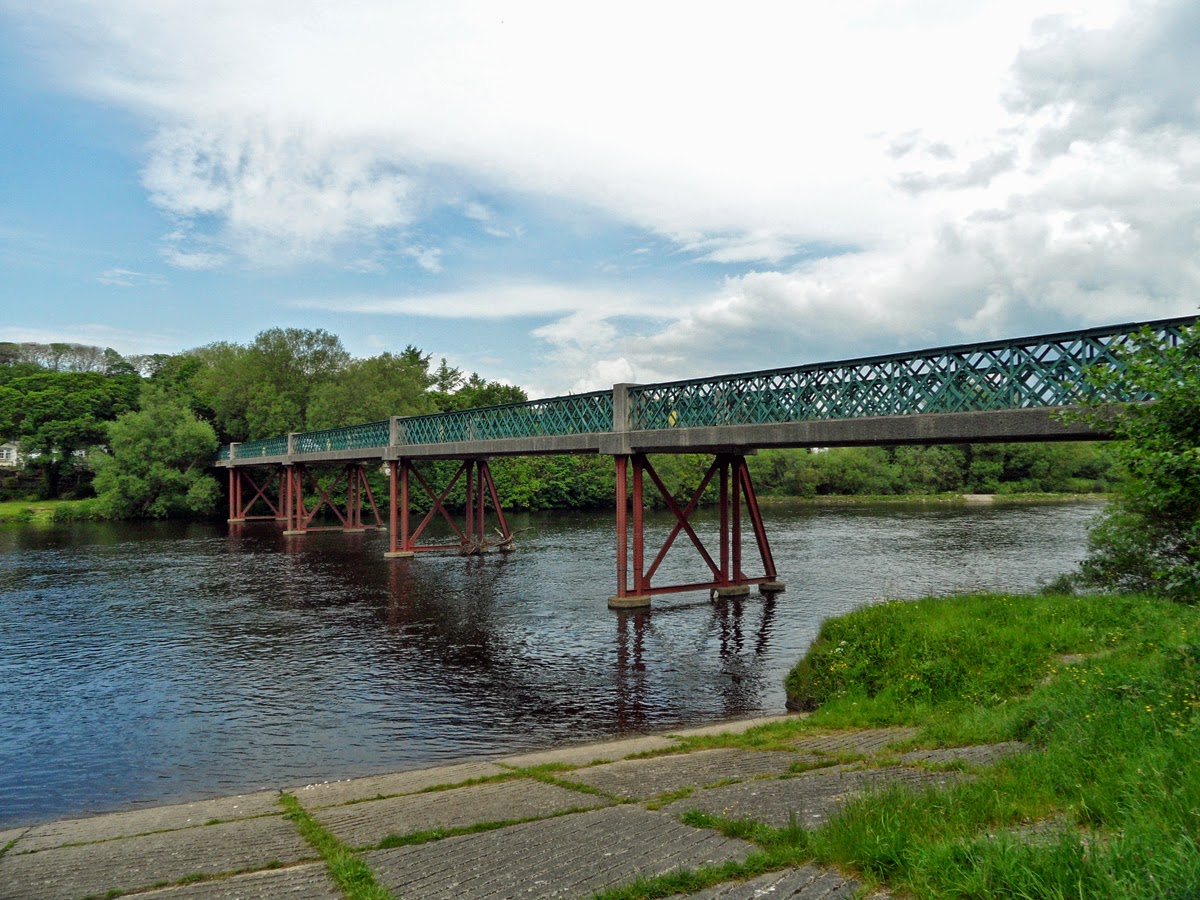 The comments to this post offer further information on this bridge, and see also pages 206 and 207 of http://www.drakkar.co.uk/ch13.pdf.