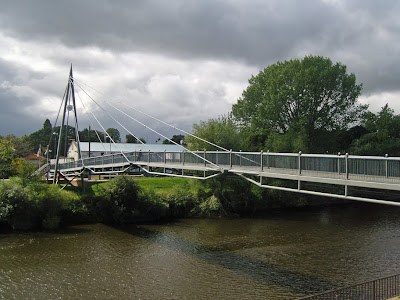 From the brand-new Diglis Bridge, head north through Worcester town centre. First you'll come to John Gwynn's 1781 road bridge, the only road bridge in Worcester. Next, it's the Worcester to Hereford Railway Bridge, built in 1860 (with its river spans replaced in 1905).

The next bridge is, like Diglis, a cable-stayed footbridge, the Sabrina Bridge. This was built in 1992 for £617,000 by Morrison Shand Construction Ltd, designed by YRM Anthony Hunt Associates. As at Diglis, it has a single A-frame tower on the west river bank, with an asymmetric span arrangement. The main span is 62m, with a 3m wide deck.

The bridge is generally in steel, with timber deck planks with added anti-slip surfacing. When first built, the bridge attracted criticism for its slippery surface (presumably untreated timber), which led to a number of insurance claims and had to be replaced. 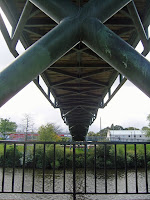 The really interesting feature of this bridge is the form of its deck, which consists of a series of steel tubular trusses spanning between the points of cable support. The deck is hinged at the connection points. This converts the bridge from the static indeterminacy of a normal cable-stayed bridge into a determinate structure.

This simplifies design, and also the construction of a bridge, as the cable stiffness has no effect on the stresses within the deck, allowing the cables to be adjusted freely during construction. The bridge then largely comprises a series of rigid triangles pinned to each other. 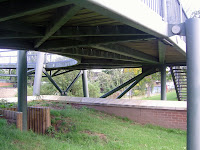 However, this is not a structural approach I've seen anywhere else. The hinges may be difficult to maintain, and the advantageous load distribution offered by a continuous stiffening girder is lost. You might expect the bridge to be more vulnerable to dynamic excitation, but I didn't find that to be the case.

An asymmetric cable-stayed bridge results in significant out-of-balance horizontal reactions at the end of the deck, due to the force in the deck balancing the main span cables. On Diglis Bridge, I guess this force is taken into the pylon base and then perhaps balanced against the back-stay anchors via a buried strut. At Sabrina, the force is tied back by diagonal bracing members visible in the photo above right, running from top right to bottom left. 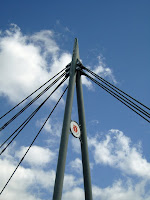 The pylon is of the simplest form possible, and is noticeably more slender than on the Diglis structure. It's adorned with the arms of Worcester's twin town, Kleve (in Germany), but this doesn't detract too much from the pylon's appearance. Personally, although Sabrina's pylon is slimmer, I prefer the more sculpted form of the one at Diglis.

Sabrina Bridge is an unusual structure, and I'd be interested to know of any other cable-stayed bridges which share its hinged deck form.

Further information:
Posted by The Happy Pontist at 11:32 PM