Here's a second bridge from the French city of Nice. 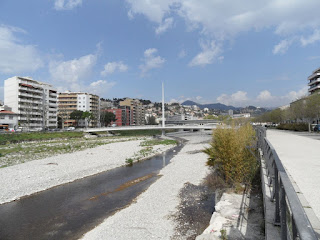 The Passerelle du Paillon is a modern addition to the city, completed in December 2010. It's only a short distance from the railway bridge in my previous post, and it carries pedestrians and cyclists across the wide bed of the river Paillon. 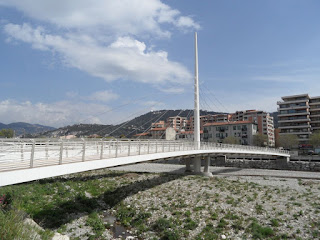 The bridge was designed by noted French architect Alain Spielmann. Coyne et Bellier were the structural engineers, and Eiffage and J. Richard Ducros the contractors. 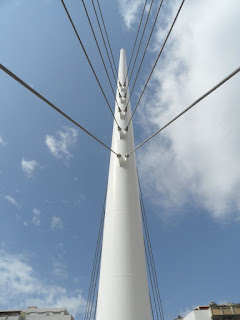 The budget for the 75m long bridge was 3 million euros, but completion of the bridge was delayed by a year when tenders came in 50% higher than expected. 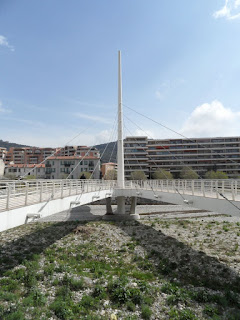 The main mast is supported on a foundation comprising 30m long 1.2m diameter reinforced concrete piles. Two additional stub columns are located on the foundation, presumably to stabilise the bridge deck against twisting. 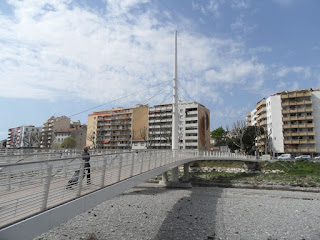 The bridge is a symmetrical cable-stayed steel structure, with a 25m tall steel pylon supporting twin decks in an "X" configuration. The 3m wide decks appear to comprise steel box girders on the inner edge, with an outer edge supported from cantilever struts.

Planters have been awkwardly placed at the entrance to each arm of the deck, presumably because the designer didn't consider that a 3m wide space might be attractive to drivers of small cars. 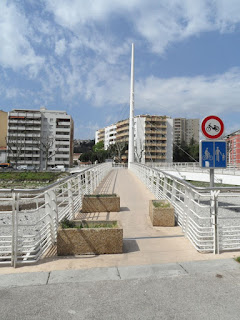 The outer edge of each deck is hidden behind a narrow steel fascia strip, presumably added to provide a clean line and hide the tip of the cantilever supports. 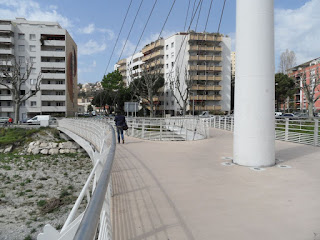 The layout of the bridge is much more attractive than a straight-line bridge would be, but strikes me as over-generous for the bridge's location and likely useage. It's well out of the city centre and alternative walking routes are available at a reasonably close distance, so the layout and dimensions appear excessive. I wonder what had to be omitted from the design to bring tenders back within the original budget? 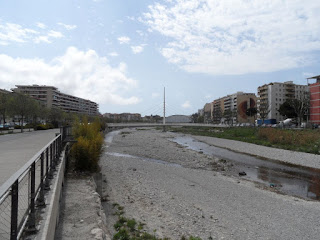 The twin-span solution, with a single pier in the centre of the riverbed, is appropriate to the location. On the west bank of the river, the footway is narrow, but on the east bank it is wide. An asymmetrical design with an offset pylon could therefore have been feasible, with backstays landing on the east bank.

However, the chosen design minimises intrusive construction works to both banks, and the height of the pylon is perhaps more appropriate to the surroundings than would have been the case for an asymmetric solution. 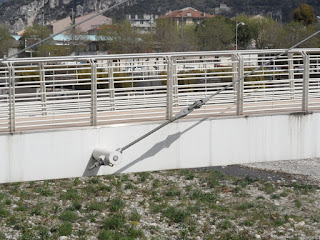 For the most part, the bridge is well-detailed, without undue fuss. I like it. 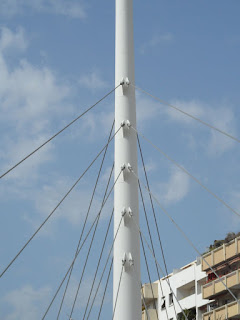 Posted by The Happy Pontist at 8:39 PM No comments:

I'm going to feature a couple of bridges that I found last time I was in Nice, France. 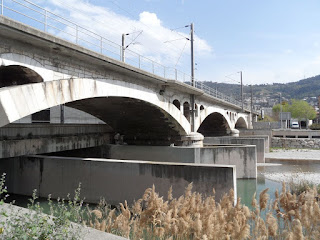 I've done my best to find any information on this three-span masonry arch bridge, which carries a twin-track railway line in Nice across the Paillon, a seasonal river which is exposed here, but buried in a tunnel in most of the city centre.

I don't know when it was built, or by who, so please feel free to add information in the comments, if you can. 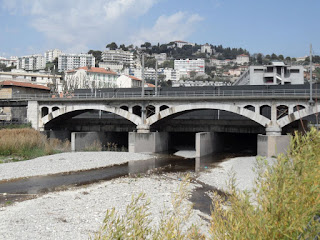 What I like most about this bridge is its clear, clean lines. Seen from far enough way, it could be mistaken for a concrete bridge, due to its sharp, hard lines and general lack of texture.

Seen closer to hand, the scale of the facing arch voussoir blocks is impressive. From below, it can be seen that the bridge isn't really made from such large blocks, but from more conventional coursed masonry. 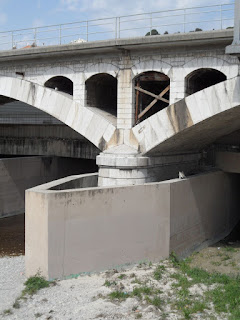 The paleness and the hard edges to the masonry indicate that this is a well-engineered bridge, a work of rigour and certainty. 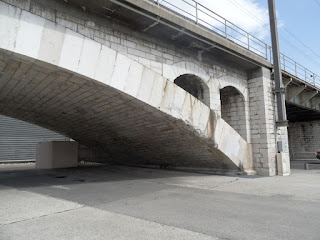 The bridge deck has been widened in concrete at some stage, but the lightweight balustrades ensure this has little visual impact. 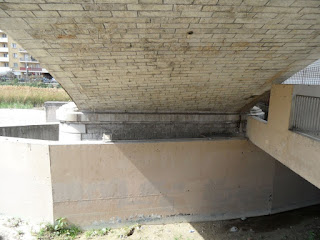 The concrete "boats" which have been placed around the original stone piers are one of the bridge's least attractive features. The original stonework is left marooned, like a giant stepping across a river with her feet in saucepans. 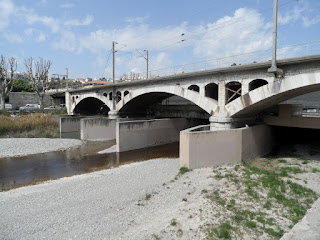 Additional piers have been inserted halfway along the river spans, which help support a lower-level roadway bridge adjacent to the railway structure. Oddly, I don't think these are such a bad feature - they seem sufficiently divorced from the bridge above that it shrugs off their intrusion.

The addition of overhead electrification is less successful, with one support point above a pier, another above an end pilaster, and one in an awkward position part way long a span. It's hard to believe it would have cost much more to position every support symmetrically above the piers. 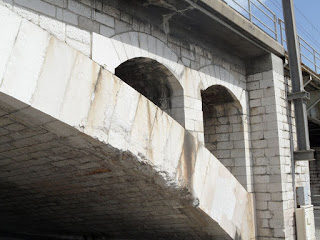 The bridge is generally in very good condition, except for a few areas of staining and this area of damage to a lower edge.
Posted by The Happy Pontist at 9:08 PM 1 comment:

One of my readers has written to ask whether I know of any examples of UK historic bridges (ideally Listed ones) which have been widened in modern times to increase capacity for pedestrians and cyclists.

From my previous posts, my personal favourite is Roxburgh Viaduct, with a footbridge added at a low level (although this is, of course, not a modern addition). A poor example is Byker Bridge, while I've covered Hungerford Bridge / Golden Jubilee Bridge on two occasions.

I can think of a few more, but I'd be interested to see what examples any other readers can suggest, both good or bad. Please post in the comments!
Posted by The Happy Pontist at 11:49 PM 3 comments:

I'll finish this short series of posts on the bridges of the University of York with a sampling of some of the other footbridges to be found at the University's Heslington Campus.

But first, I found a couple more photographs of the weathering steel footbridge, which make for an interesting comparison with my own photographs. Both of these are courtesy of the University's image library. They show the bridge as it was originally designed and built, not as hidden behind trees as it now is, and with a much more open and attractive parapet. It was clearly a genuine work of art, and deserving of wider recognition. Although it's still an attractive bridge, it's clearly not what it used to be. 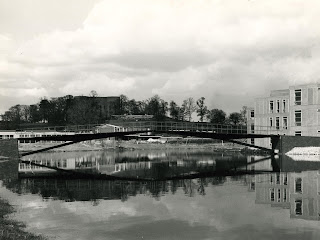 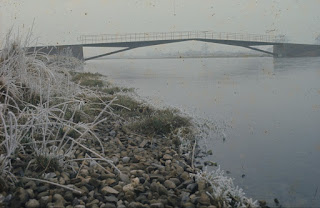 Here are a few more of my own photographs of bridges at the University: 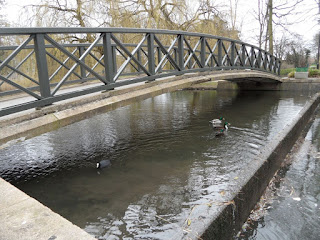 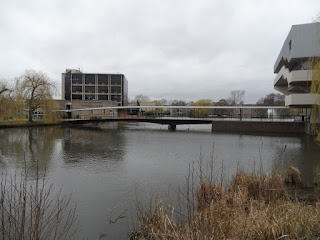 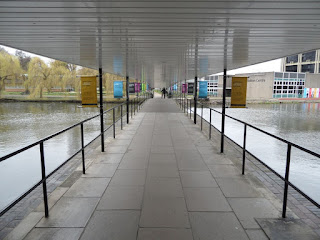 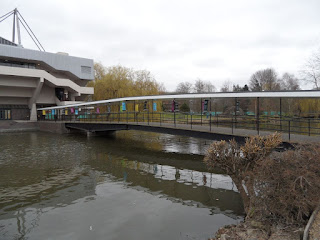 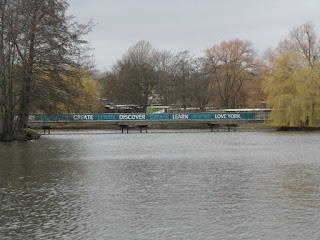 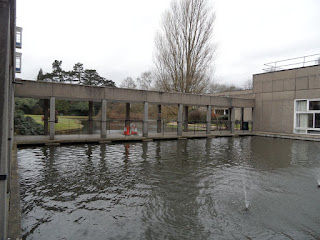 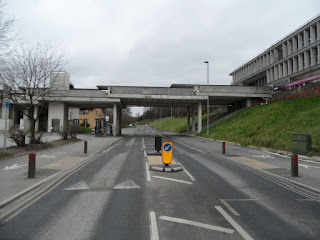 Posted by The Happy Pontist at 8:30 PM No comments: