From Croome Park, we head a little west and north, to the outskirts of Worcester, to visit two bridges, one old, and one older.

Both bridges are in Powick, and carry the highway across the River Teme, a tributary of the River Severn. 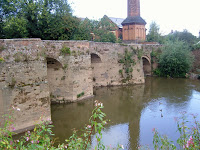 Old Powick Bridge is over 500 years old (dating at least to 1447), and is a five span masonry arch bridge. Two spans cross a mill stream, with the other three passing at high skew (about 30°) over the River itself. Between the arches are massive piers with substantial cutwaters. The bridge is protected as a Scheduled Monument, as well as being a Grade I Listed Building. Historically, it's best known as the site of one of the opening skirmishes in the English Civil War.

When later engineers came to build arch bridges in brick, skew presented a major challenge, with a number of complex schemes developed to ensure that so far as is practical, the stresses in the masonry remained perpendicular to the mortar beds. The article on skew arches at Wikipedia gives a great illustration of the problems (and incidentally, is by far one of the best articles I've seen on Wikipedia). It also links to many of the original books and articles written on the subject over the years. 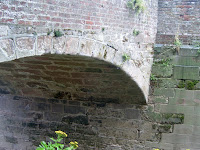 Bridges of this vintage with this high a skew are unusual - it would have been far simpler at the time to change the road alignment and cross the river without skew. The old Powick Bridge is what may be termed a "false skew arch", as the masonry courses are parallel to the arch springing rather than perpendicular to the direction of span (see picture). In theory, this results in a tendency for the arch voussoirs to slide out of position. The Powick Bridge has certainly required repair on numerous occasions throughout its history, as will be readily apparent from the photographs, but I think its sheer weight probably prevents the skew from causing any structural problems. 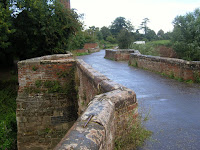 What makes the bridge particularly attractive is the combination of its offset cutwaters with its meandering alignment, which can be seen in the aerial photos at Google linked below. It makes walking across a more interesting experience, with varying perspectives on offer.

The two northern spans over the mill stream appear to be more recent in construction. The water mill was converted to a partly hydroelectric power station near the end of the nineteenth century, and now contains residential apartments overlooking the bridge. 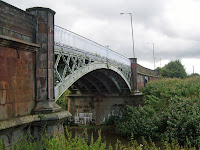 The narrow bridge clearly created limitations for transport, and in 1837 a new cast-iron bridge was opened a short distance downstream.
New Powick Bridge was designed by C.H. Capper, and is a cast-iron arch bridge spanning 21m across the Teme. It is Listed Grade II. 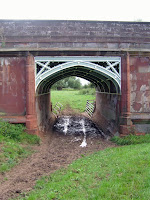 Seven arch ribs support the bridge deck on X-braced lattices. The deck was converted to reinforced concrete in 1957 and 1968, and has recently (2008) been rewaterproofed.
There are two 5m span side arches, providing flood relief and footpath or cattle creep access. These are of a slightly different style to the main arch, being pointed. I like how the curved invert to the opening is exposed, giving the impression of an oval opening rather than just an arch portal.

Further information:
Posted by The Happy Pontist at 11:55 PM

After living in the area for over 40 years, I diverted to this bridge for the 1st time today. How nice to come across your article when I searched for further enlightenment....I don't think you would be so happy seeing the state it and the surroundings are in today

The Old Bridge is now showing significant signs of neglect. Trees and shrubs have been allowed to grow from between the stones and bricks on the wing walls. There is a substantial crack where the right bank arch meets the abutment on the downstream side. The cutwaters have been damaged too.

And, this week, the brick topping on the paparapet has been pushe off by vandals. This brickwork was done rather sloppily about ten yerars ago, using modern bricks: not stone.

This interesting old bridge is looking very sad. I hope it doesn't fall into the same state as the Eastham Bridge, which collapsed last year.

Deterioration should be reported to Historic England and the local authority, and it's worth a discussion with any local history or heritage groups to see whether they can apply pressure to local councillors to take an interest in refurbishment.