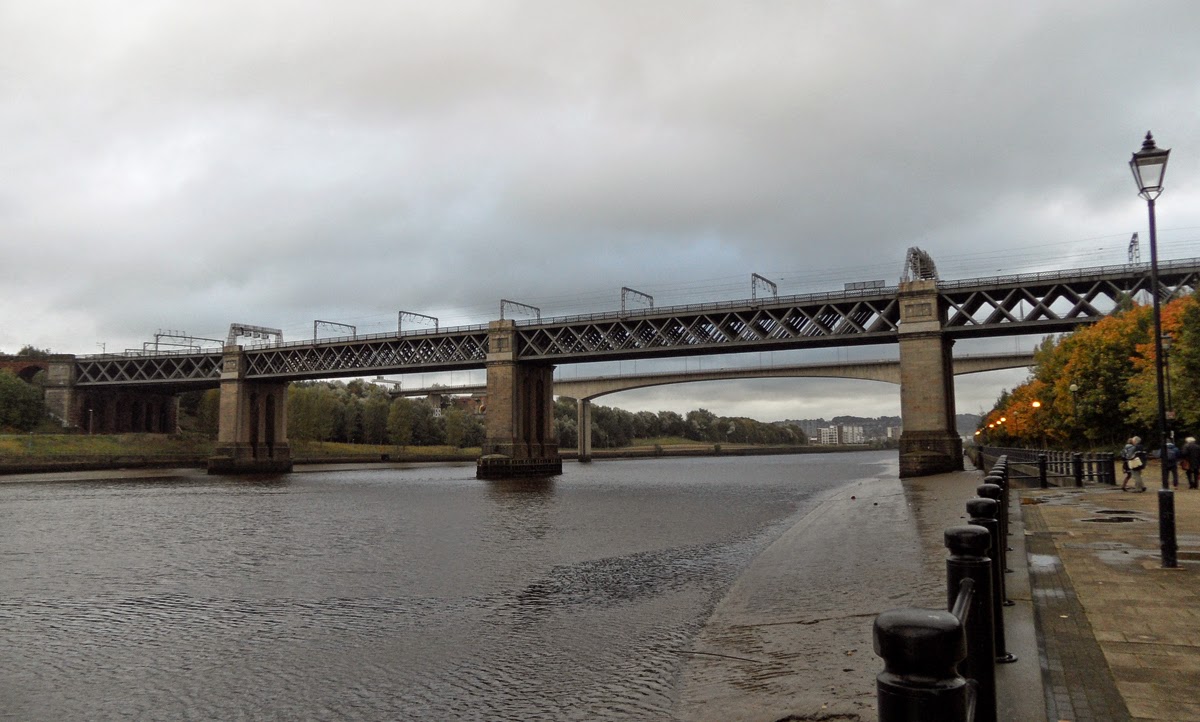 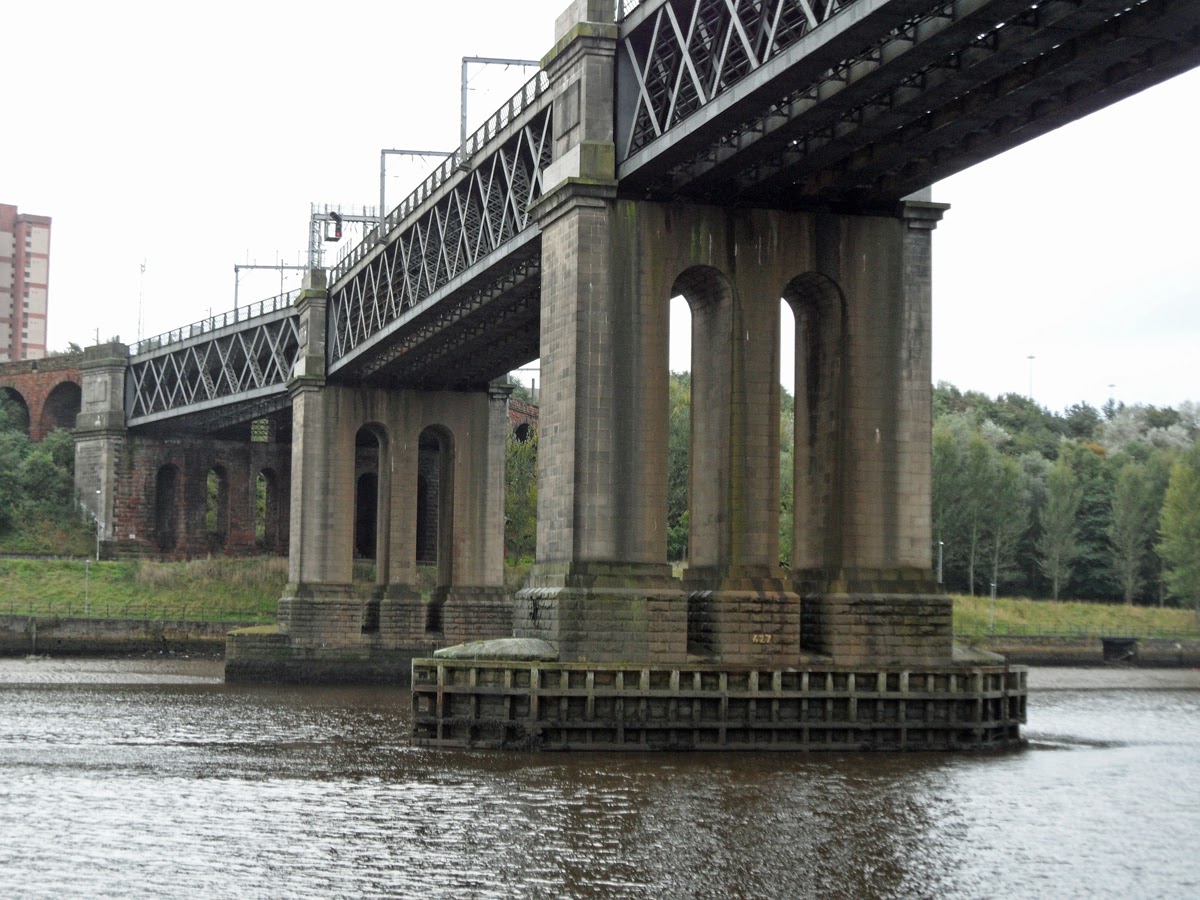 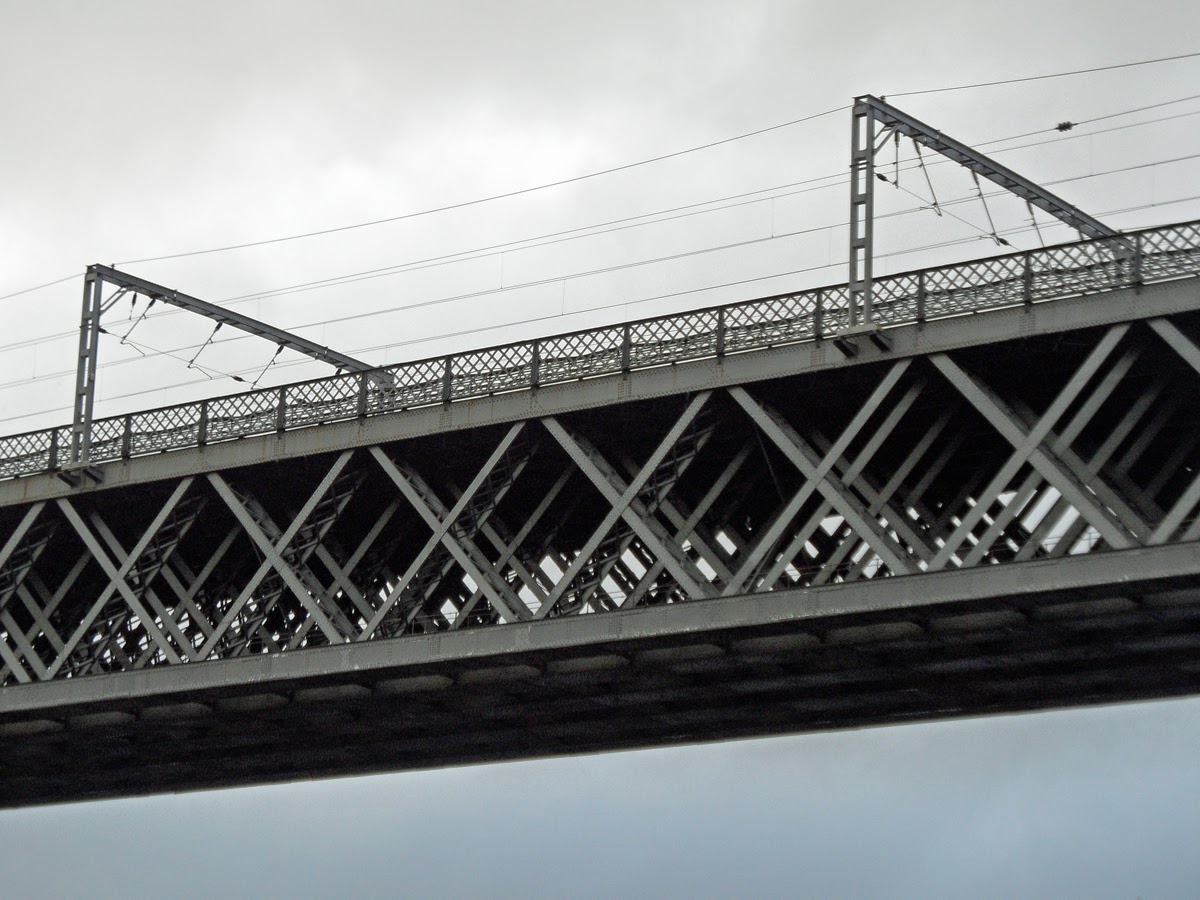 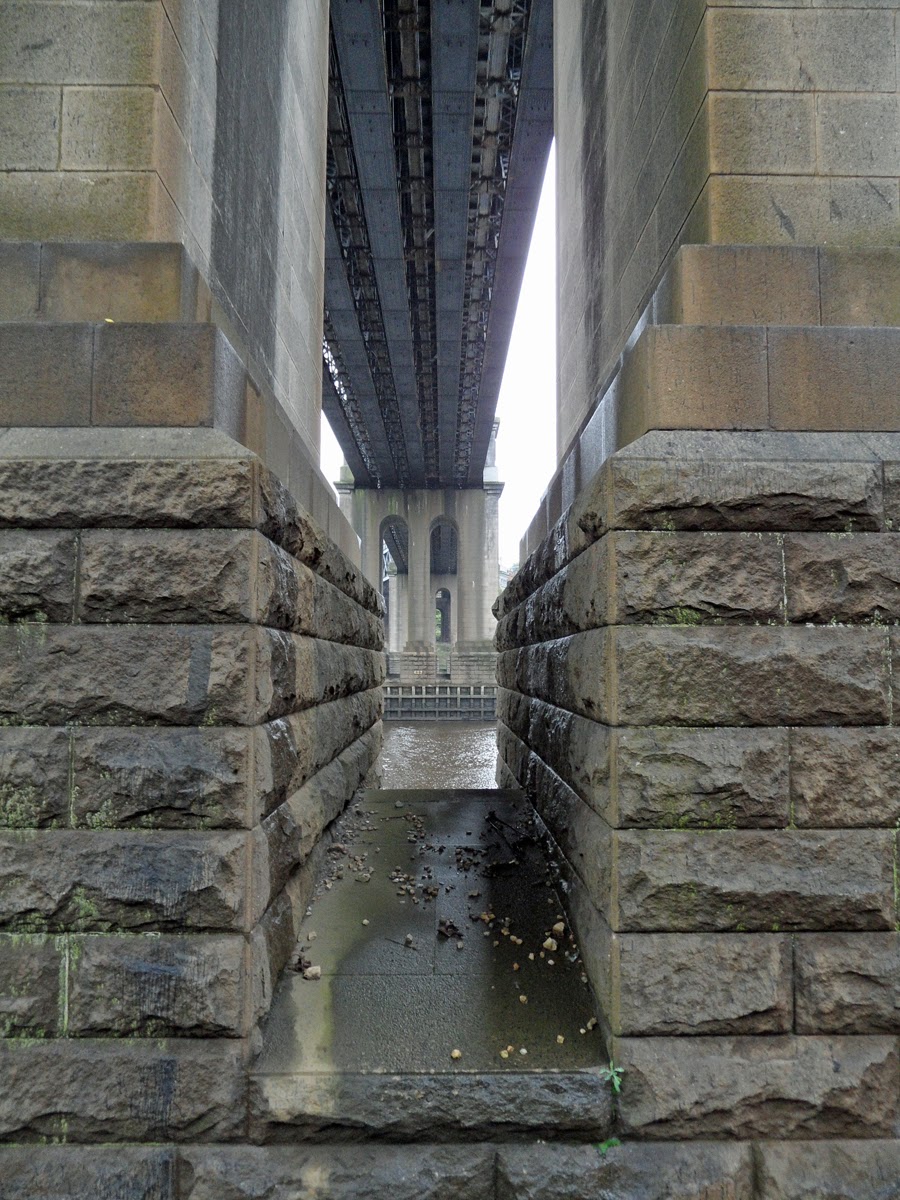 Posted by The Happy Pontist at 10:05 PM No comments:

Heading further west along the Tyne, we came to a group of three bridges which are considerably less well known than those in the immediate centre of Newcastle and Gateshead. 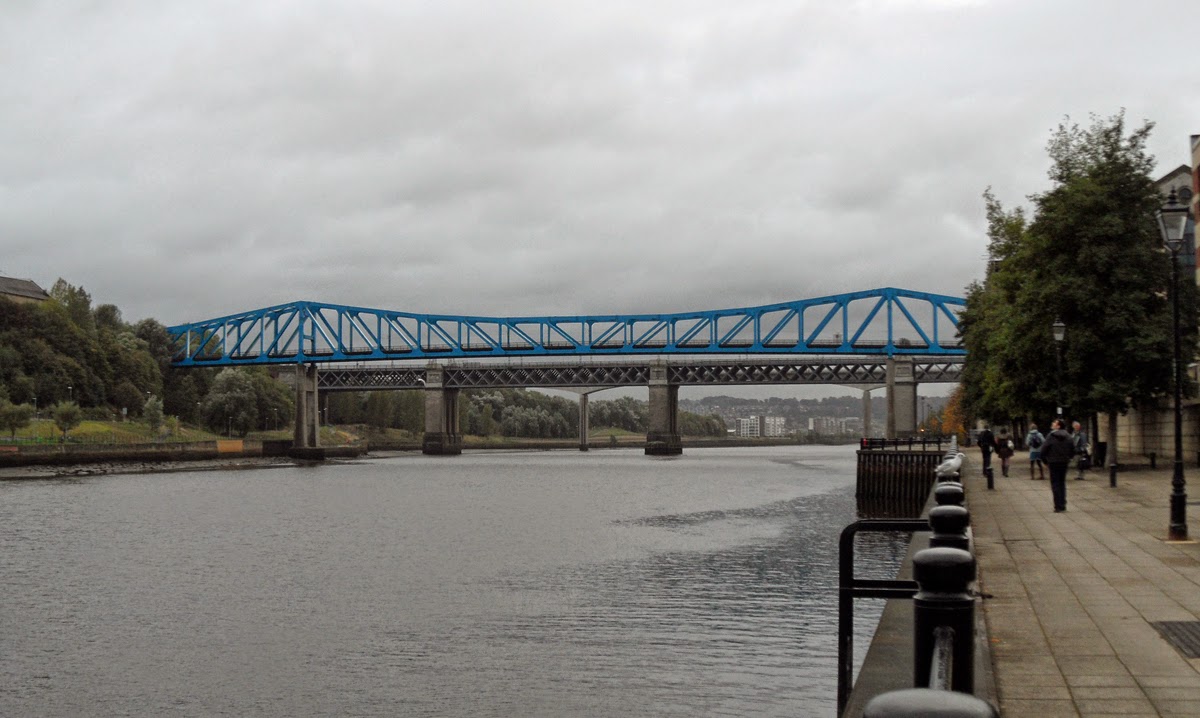 Designed by WA Fairhurst and Partners, and built by Cleveland Bridge, the Queen Elizabeth II Metro Bridge opened in 1981. It was built to carry the Tyne and Wear Metro, the first major modern light rail system in the UK. With a main span of 168m, I think it's probably the longest spanning light rail bridge in the country. It's also the longest span over the Tyne (the Tyne Bridge is 162m, while Redheugh Bridge reaches 160m). 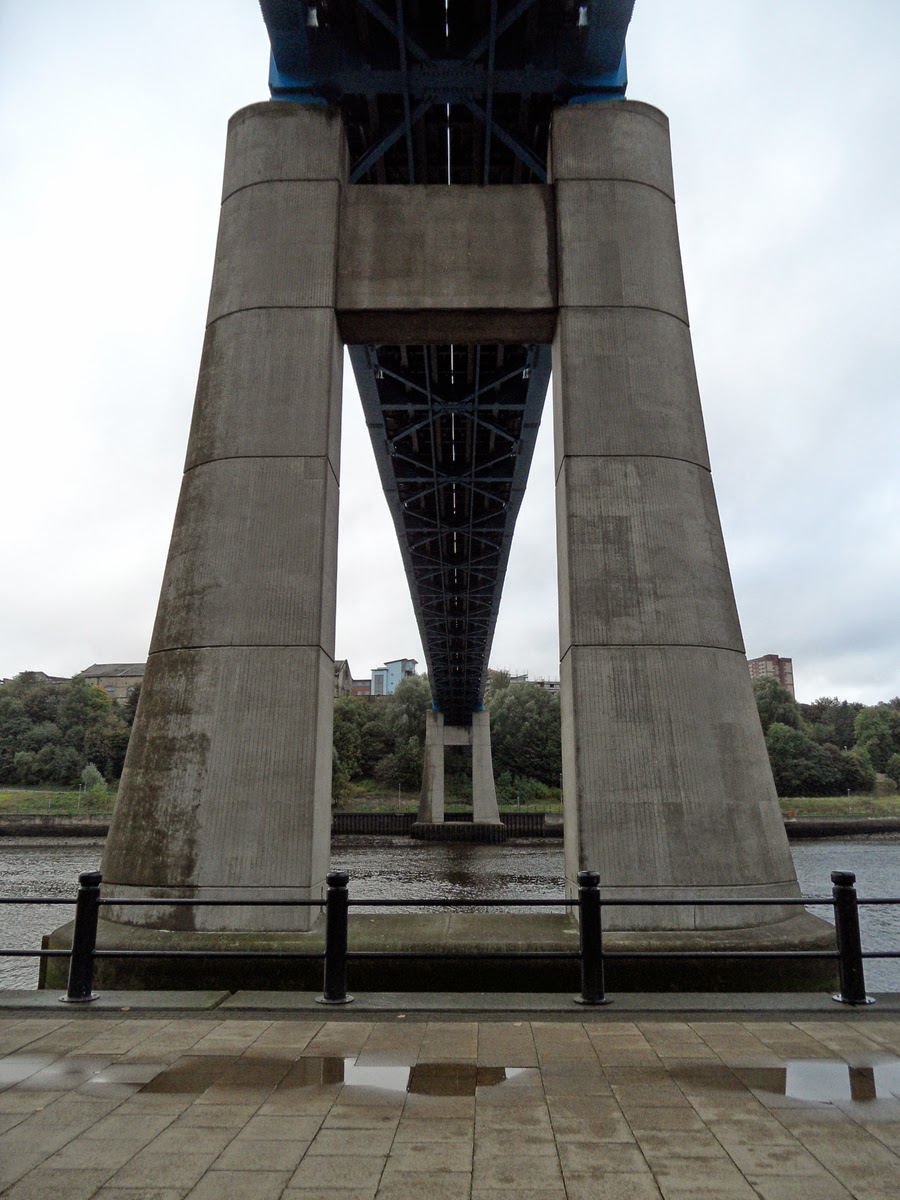 In form, the bridge is a three-span continuous through truss girder bridge, although it was constructed as two balanced cantilevers. It's a striking, impressive structure, but I don't find it beautiful. Perhaps its most interesting feature is the paint scheme. The bridge was not originally blue, but was repainted in 2006 in its present white and blue colours. At the same time, 140 lights were installed as part of artist Nayan Kulkarni's Nocturne artwork, which projects changing colour patterns onto the bridge at night. 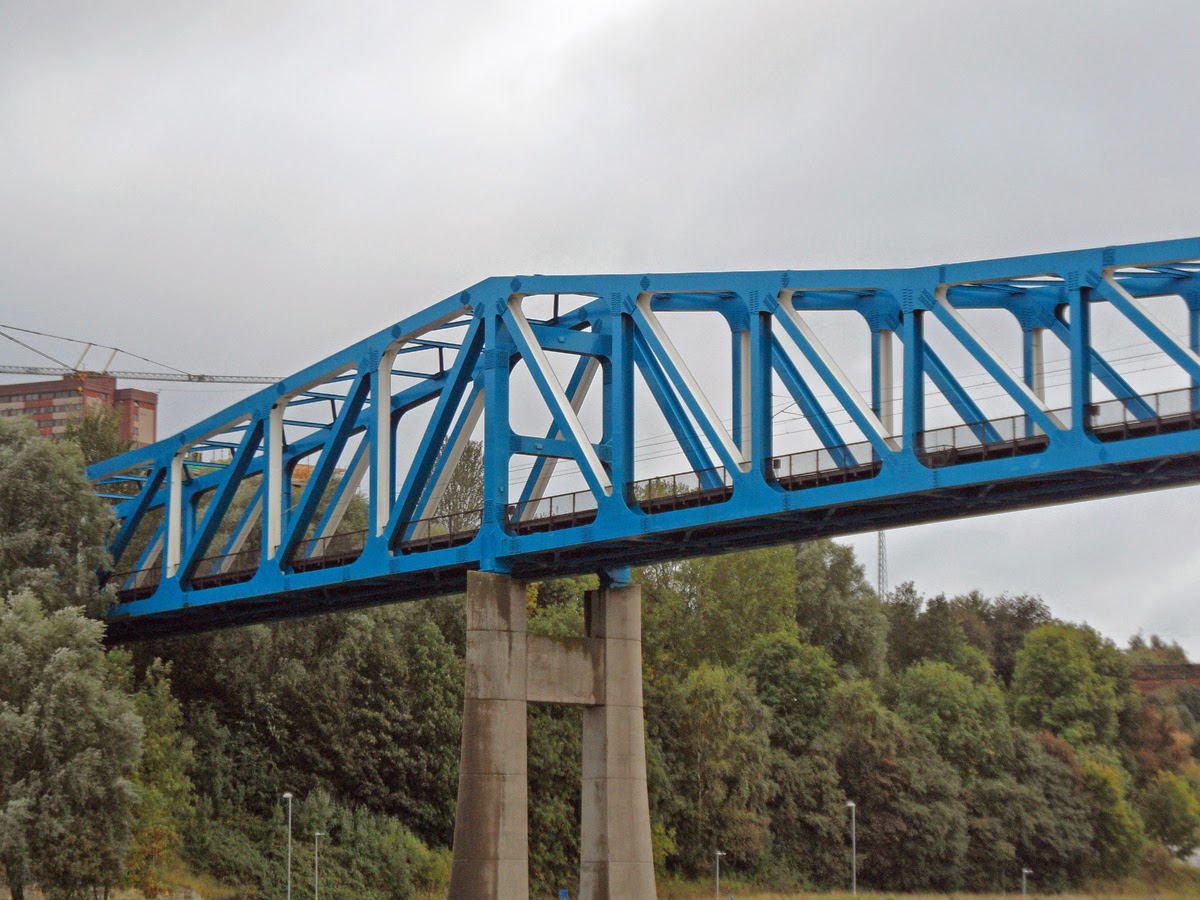 Posted by The Happy Pontist at 10:09 PM No comments:

If you keep heading west along the River Tyne, you keep stepping back in time, at least, until you reach the High Level Bridge. 2001, 1928, 1876, then finally 1849, which is when Robert Stephenson's High Level Bridge was completed. 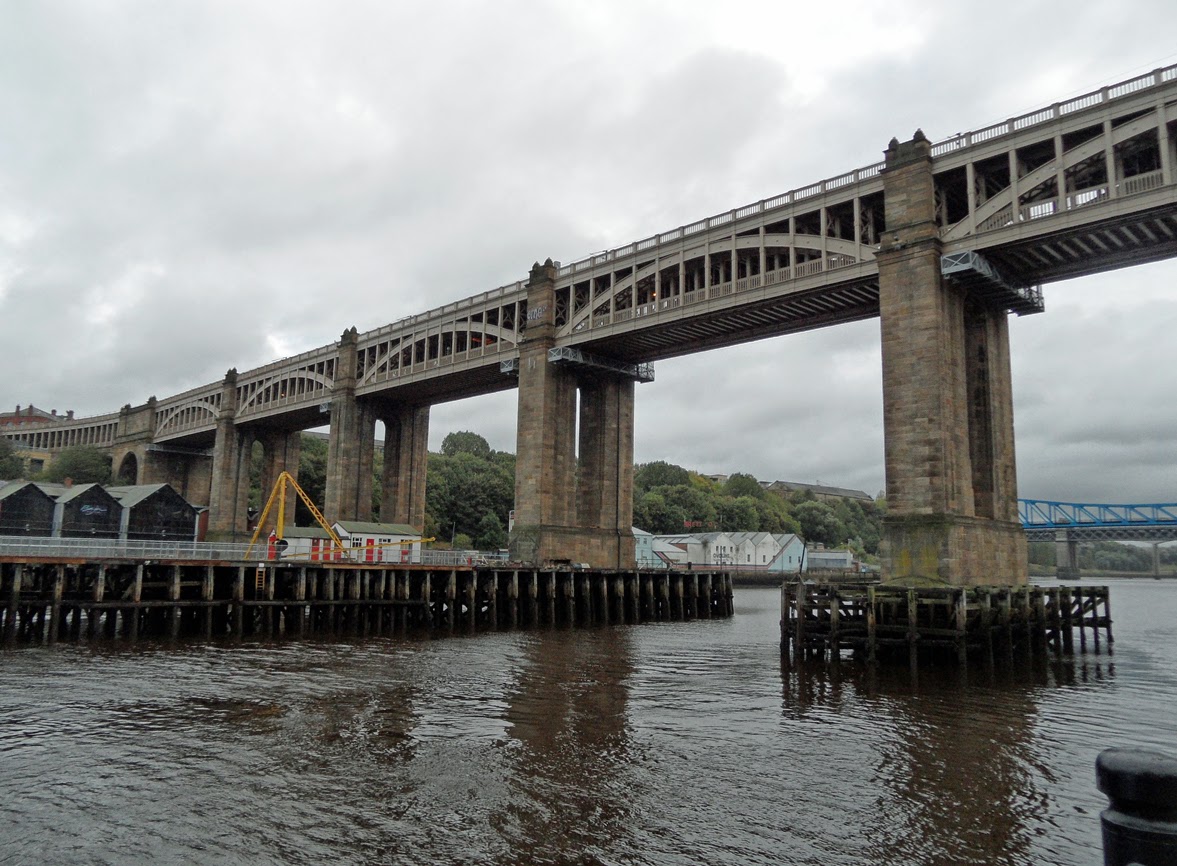 Stephenson was in the vanguard of railway bridge engineering when he designed the High Level Bridge. 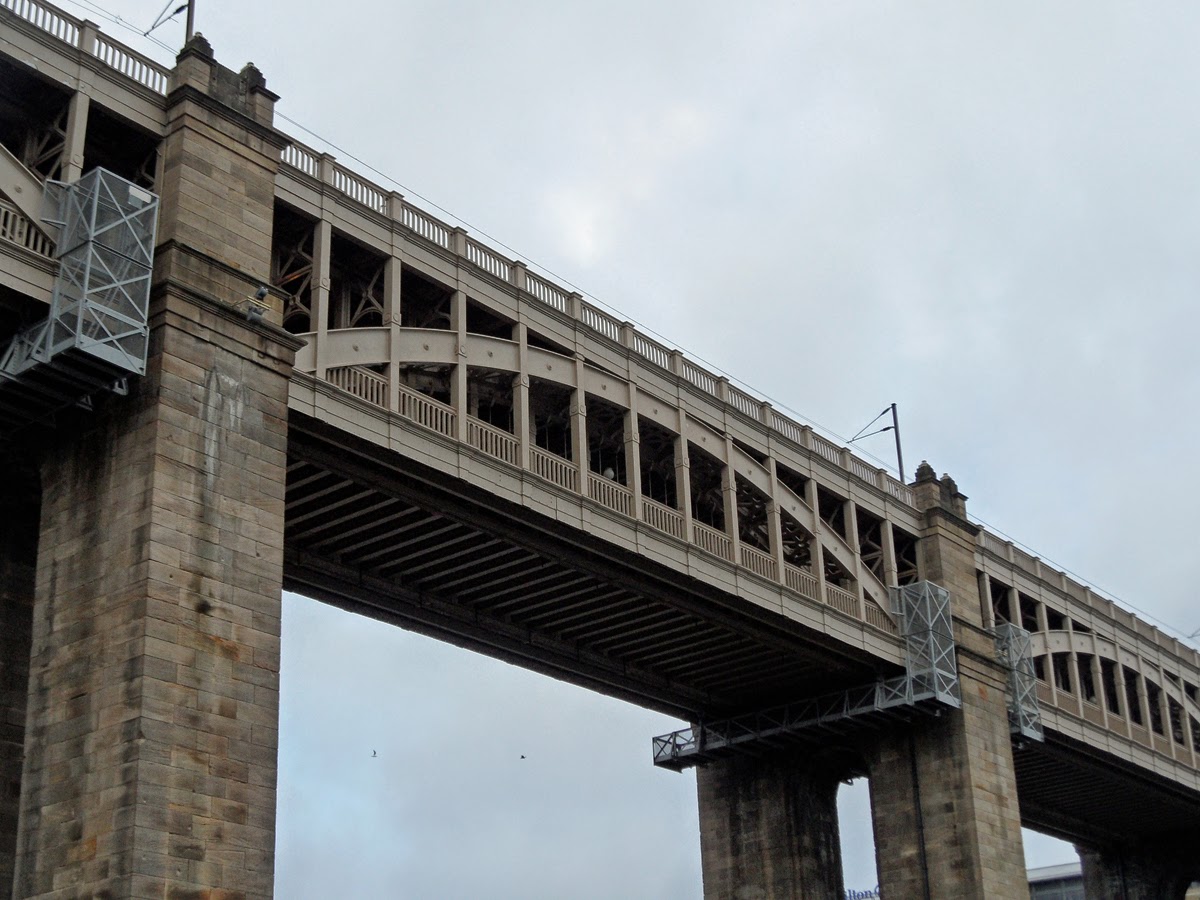 Two years before, in 1847, his cast-iron bridge over the River Dee for the Chester and Holyhead Railway, had collapsed while carrying a train, killing five people. Stephenson's design for that bridge had been deeply flawed, and he was lucky to survive the subsequent commission of inquiry with his reputation largely intact.

Working with William Fairbairn, Stephenson designed and built two tubular wrought iron rail bridges, at Conwy (1848) and Britannia (1850). These were hugely innovative, and although the tubular concept was a dead end, they were the forerunners of modern box girder bridges. 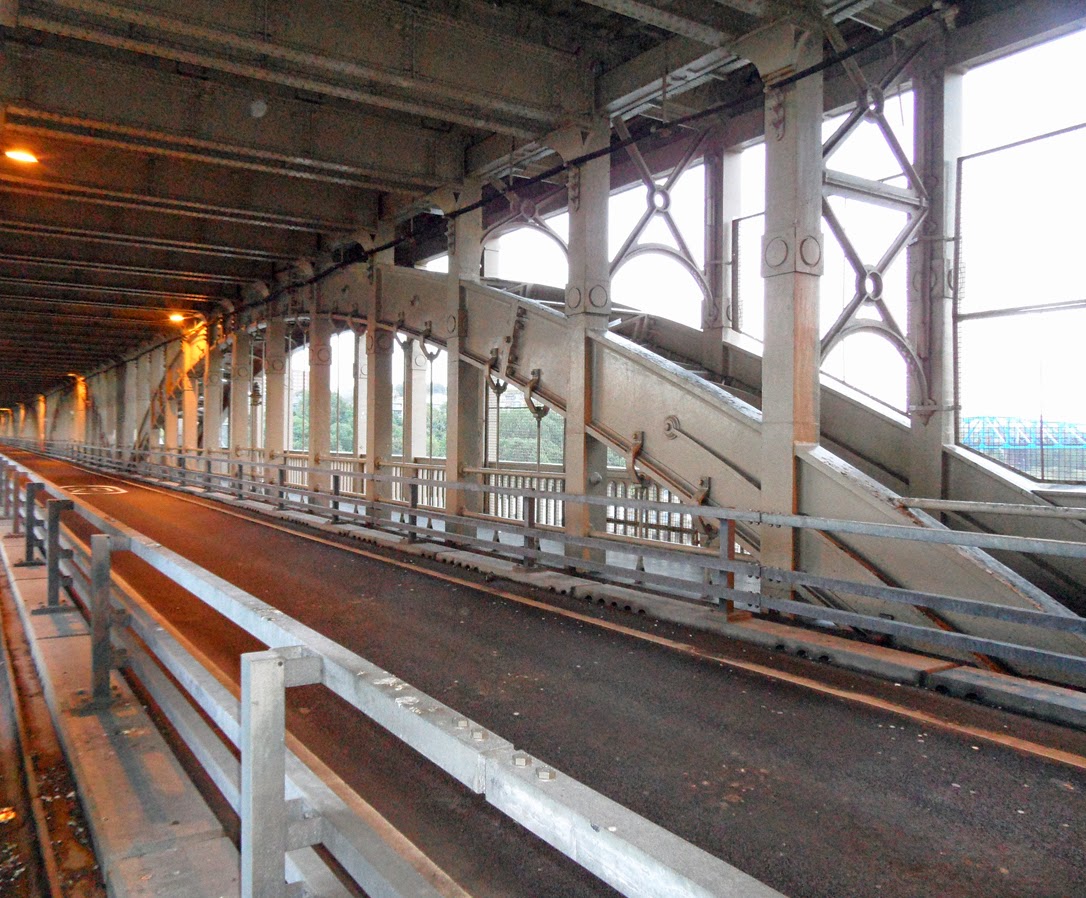 The High Level Bridge was in my opinion a greater achievement for Stephenson, although it too built upon the work of another engineer. Benjamin Green had proposed a design for a bridge at this site, to consist of tall stone arches carrying a roadway, with iron girders supported above to carry a railway. We had encountered one of Green's bridges, at Ouseburn, earlier the same day. (Another claimant to the design was William Martin, an eccentric philosopher, who published a pamphlet illustrating a very similar design, and claimed that Stephenson had stolen his idea). 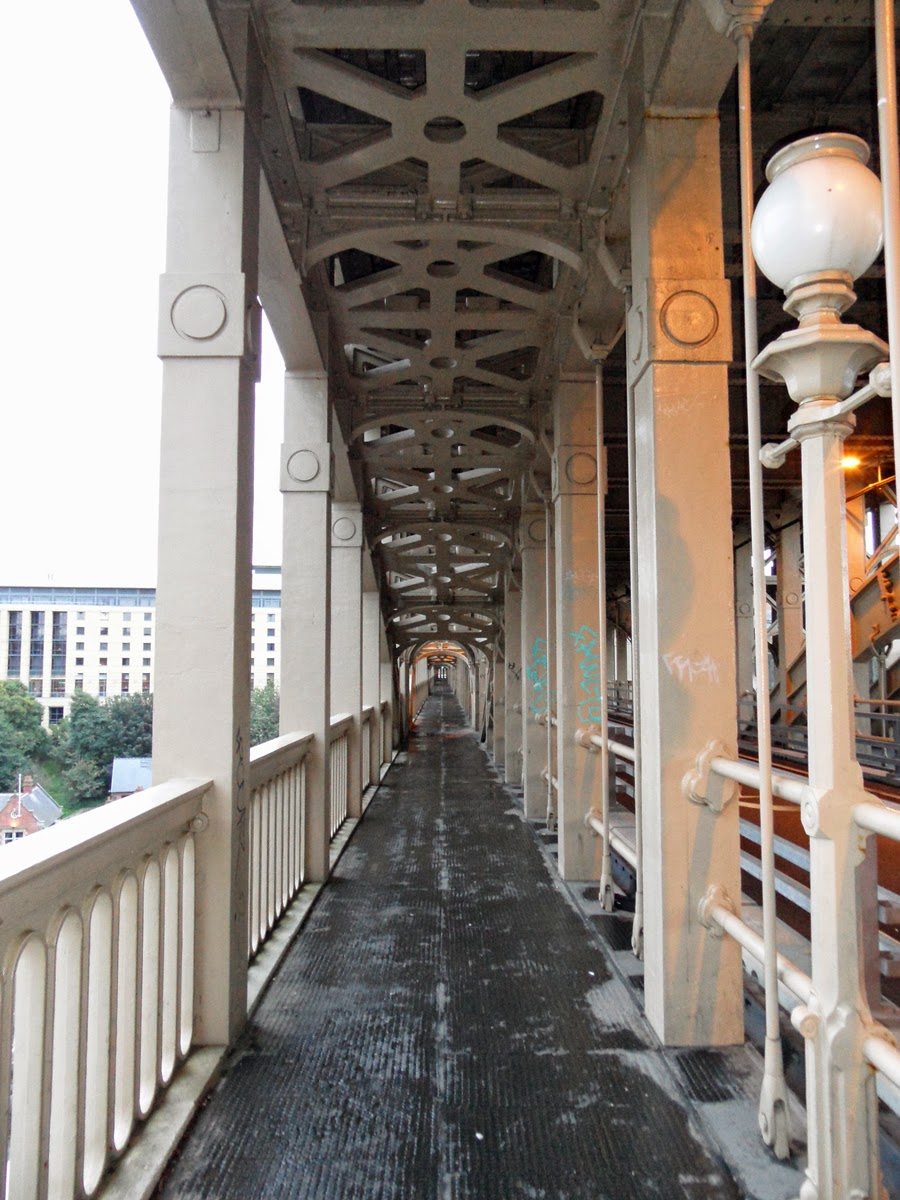 Stephenson adapted Green's concept by eliminating the stone arches and by using cast-iron arches to support both roadway and railway. Hollow vertical pillars extend above and below the arches; above, to support the railway, while below, they conceal wrought-iron tie rods from which the road-deck is suspended.

From a distance, the appearance is pleasant and unfussy. From road-deck level, this is less true, with a plethora of structural elements and bracing present. 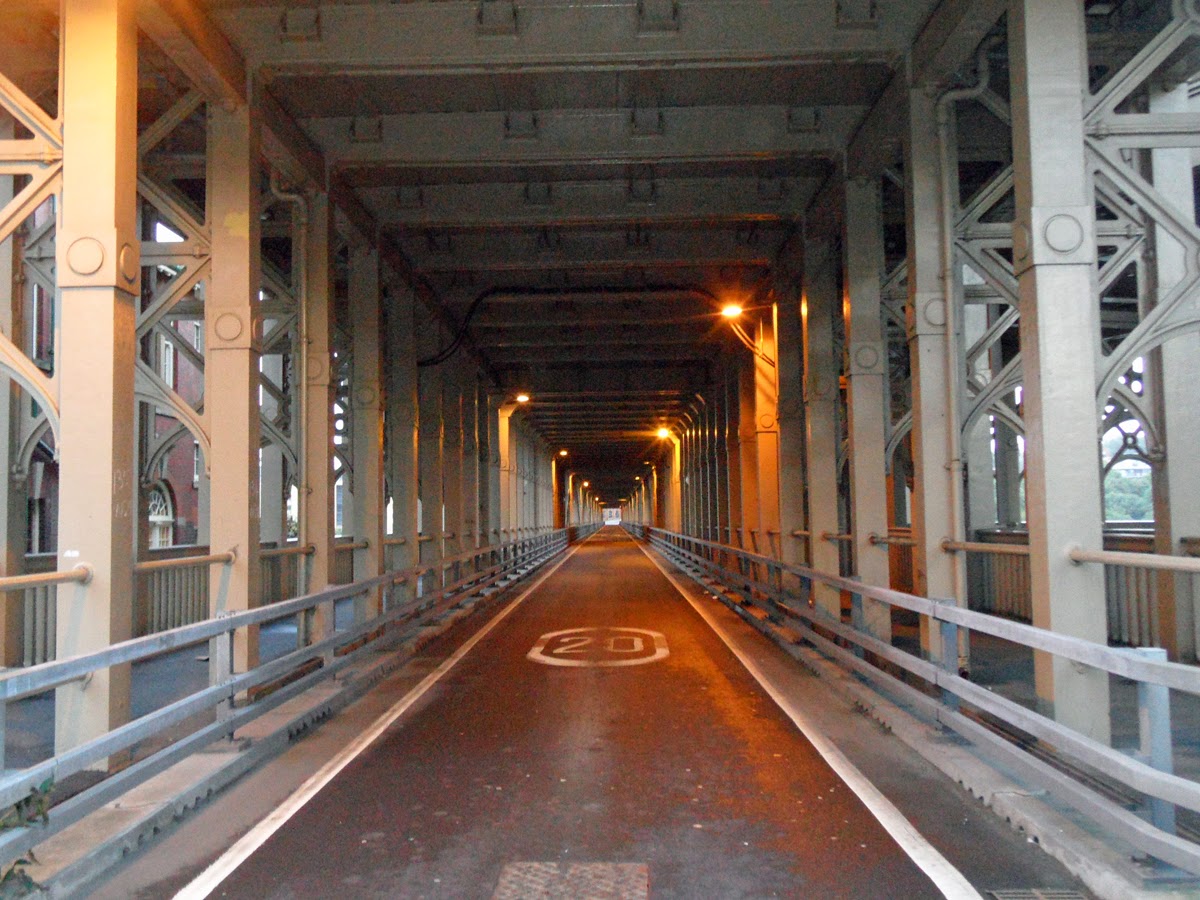 Originally, the bridge carried a two lane roadway (with tram tracks, for a time), but now carries only a single lane, one-way, for buses and taxis only. The bridge remains a significant industrial monument, but its limited capacity has become clearer over time.

Posted by The Happy Pontist at 8:46 PM No comments:

As my trip headed west along the river Tyne, it was like a journey back through time. From the Millennium Bridge (2001), we next visited the Tyne Bridge (1928). Then we arrived at the Swing Bridge, which was completed in 1876. 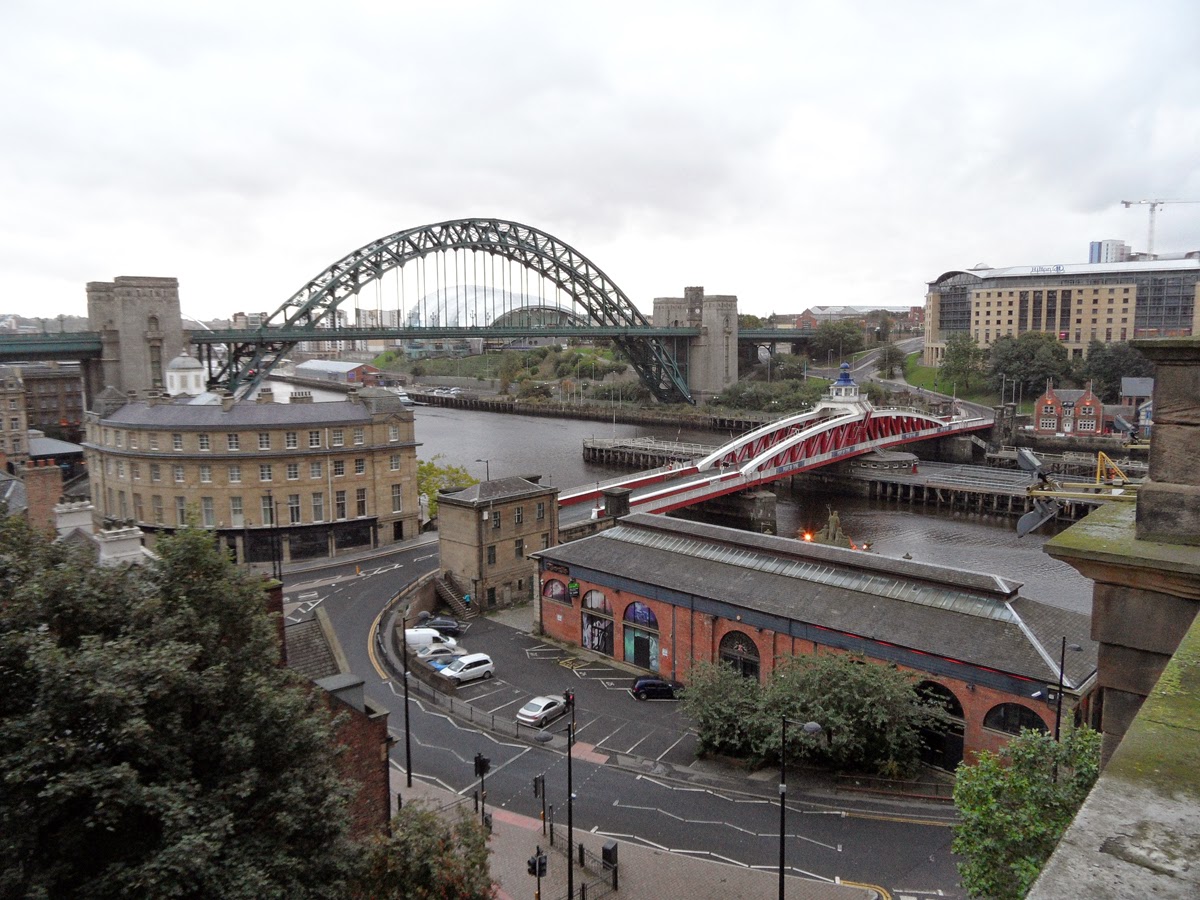 The Swing Bridge was also the site of the earliest bridges between Newcastle and Gateshead, the Old Tyne Bridges of 1270 and 1871, and before that possibly the Roman Pons Aelius. 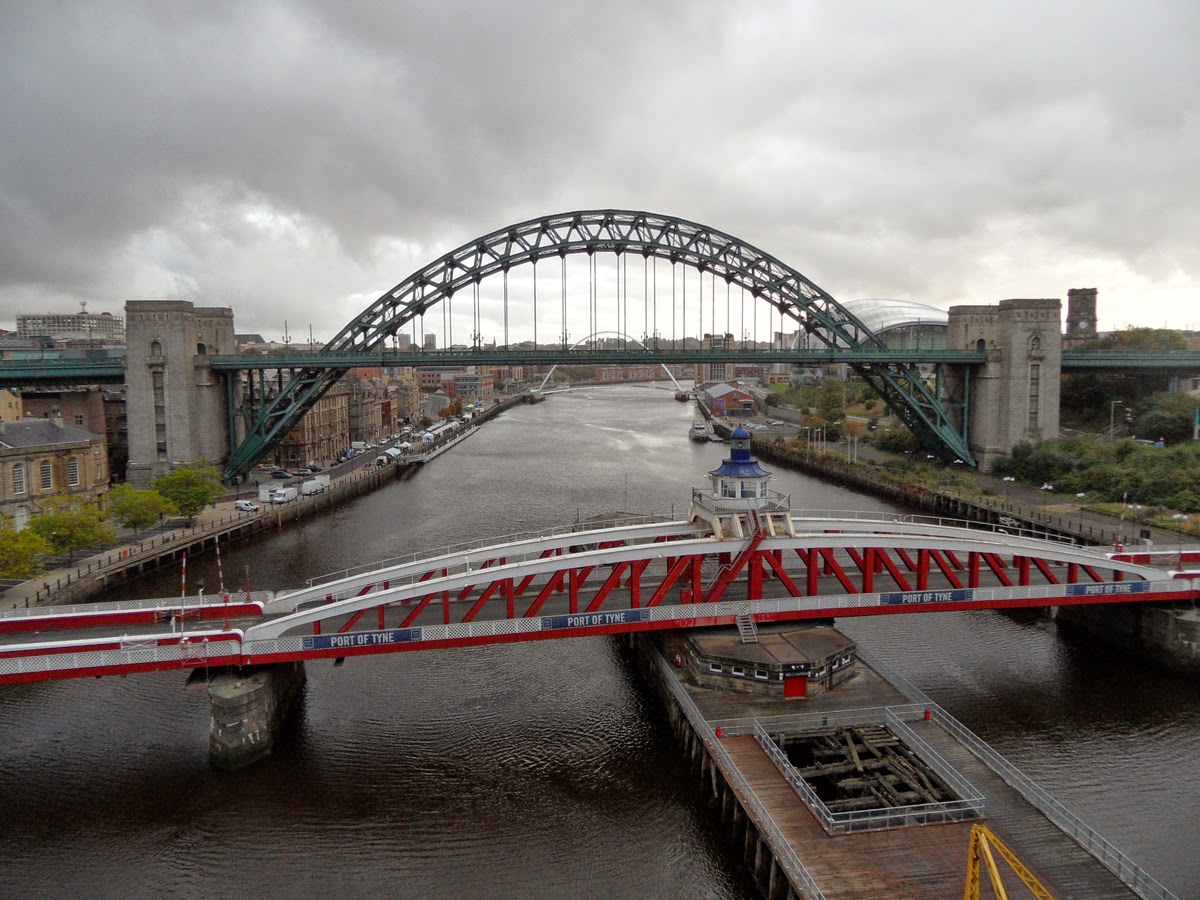 It's not my favourite of the bridges over the Tyne. Its shallow trussed form is somewhat nondescript, not to mention structurally irrational. The more obvious arrangement has a peaked form over the central support, as on New York's Macombs Dam Bridge, to take just one of many examples. The arched form of the Tyne Swing Bridge seems to be pretending to be something completely different to what it really is, although with the construction of the Millennium Bridge, it does lead to a nice visual relationship between the three arched bridges in a row. 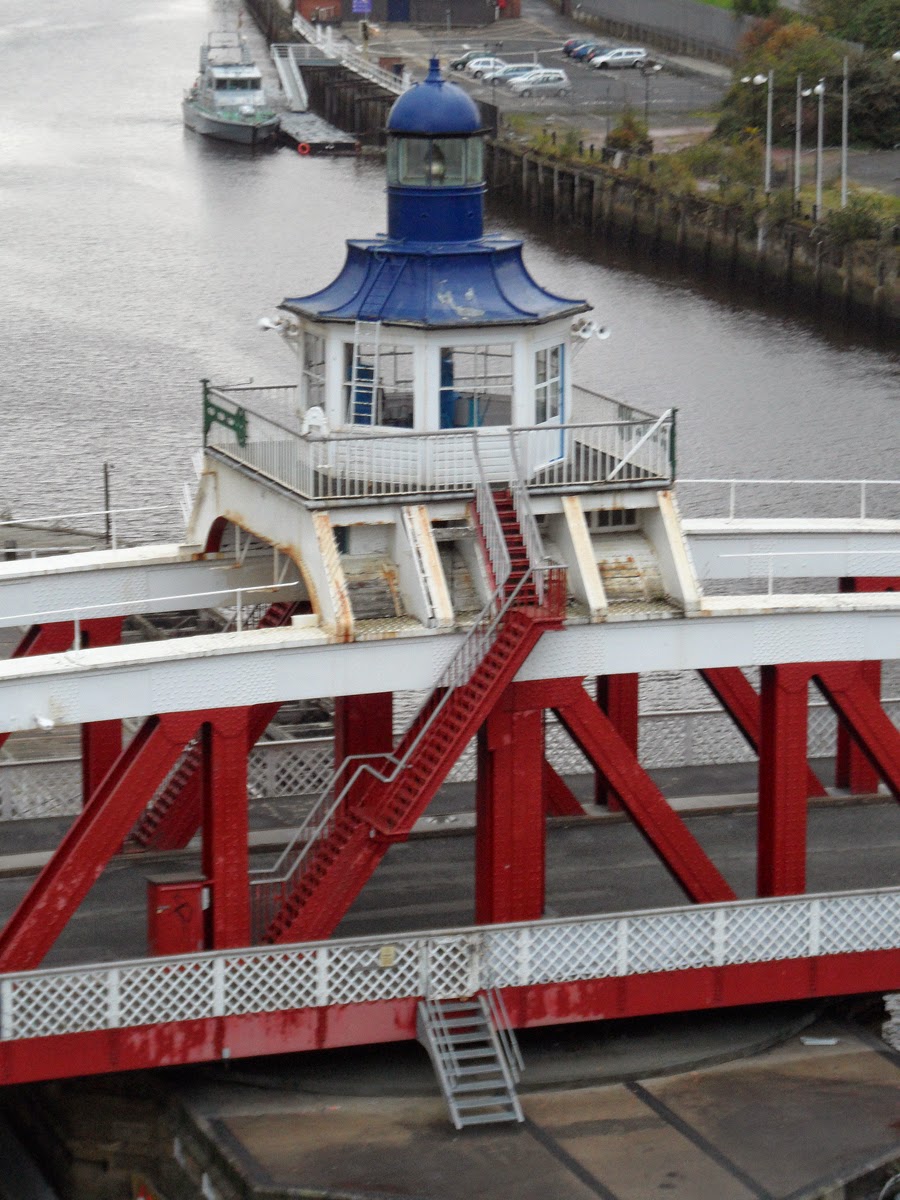 I do like the central operations room, with its jaunty seaside cap, all positioned directly over the roadway to give the operator the best views of both river and road traffic. The bridge no longer opens frequently, only about 4 times a week. 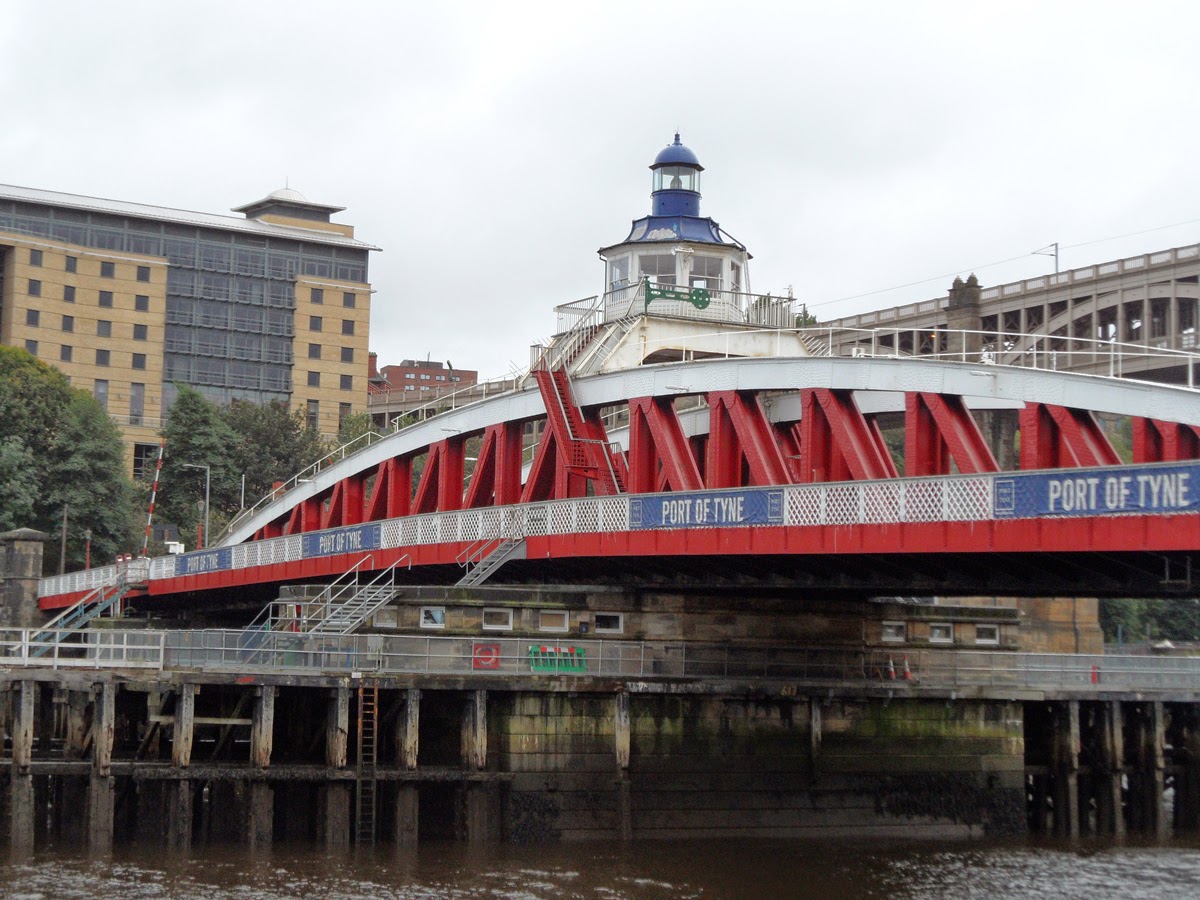 Perhaps my favourite feature of the bridge is its parapets, which are a very simple metal mesh, made up of woven metal strips and painted white.

It's interesting to compare this with the other moveable bridge on this stretch of river, the far more flamboyant Gateshead Millennium Bridge. The Swing Bridge is the more efficient solution, with the weight of both spans well balanced so as to minimise loads on the operating machinery. Of course, this comes at the cost of a large pier in the middle of the river. In theory, there's an operational risk that the operator and machinery can become isolated if the equipment breaks down while the bridge is in the open position, but I doubt this will have happened often.

Perhaps more interesting is what the two designs say about the different attitudes to economy, to extravagance, and to discretion, between Victoria and modern times. Is it imaginable that a bridge like the Swing Bridge could be built here today, and is that a good thing, or a bad thing?

Posted by The Happy Pontist at 8:08 PM No comments: