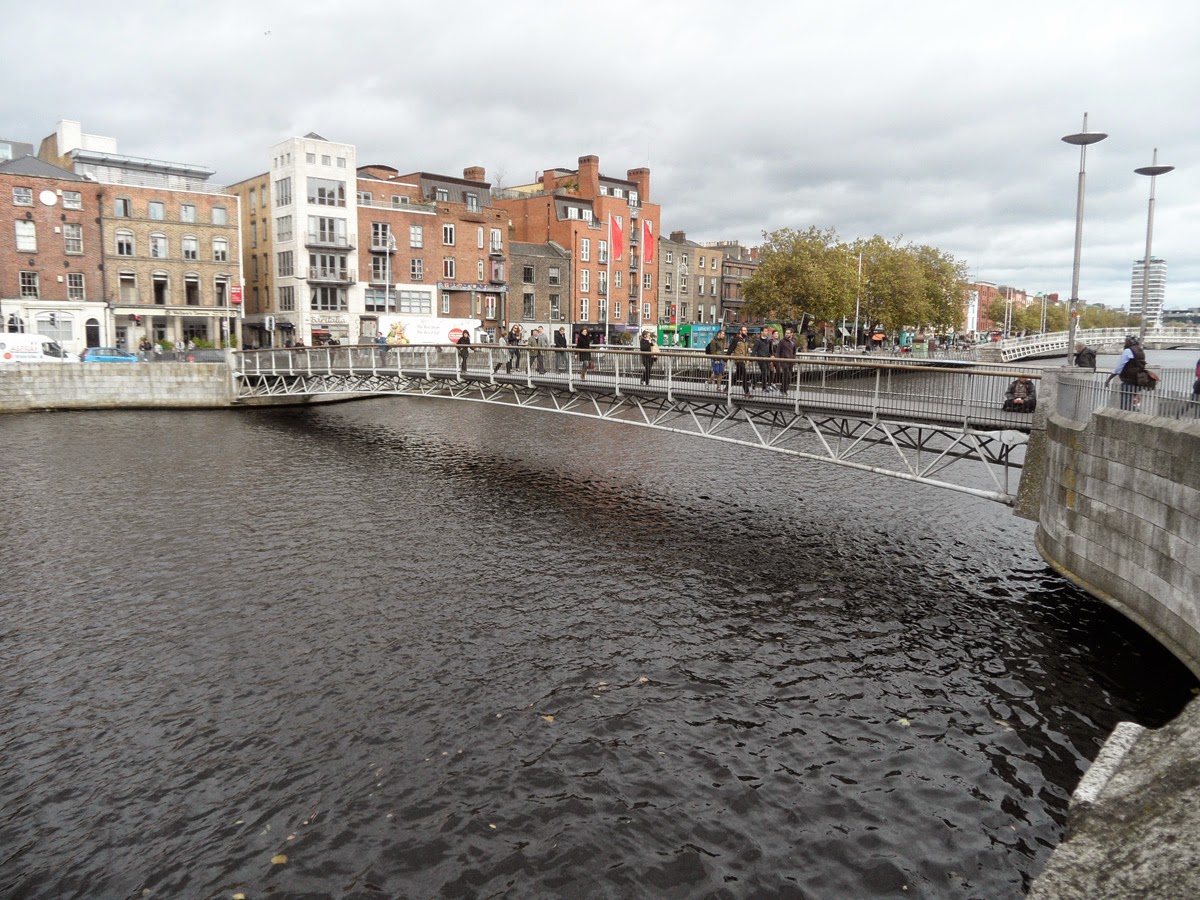 There's a website set up to document Lancaster’s Lune Millennium Bridge, built in 2001, which also attempted to chronicle a number of other Millennial Bridges built thanks to funding fever in Britain at the turn of the century. Some of these are significant and well known structures, such as the bridge between St Paul’s Cathedral and Bankside in London. Others are obscure, and of at best local significance, such as the Pennyferry Bridge in Durham.

Dublin's contribution to this array of structures unfortunately fell closer to the latter type than the former. It spans the River Liffey to the west of the Ha'penny Bridge, a river already blessed with a very large number of spans in much closer proximity than is the case in most other capital cities. Designed by Price and Myers with Howley Harrington Architects, it seems to have been drawn from a bottle of imagination which had already been thoroughly drained.

The bridge is a 41m long, 4m wide triangulated metal truss, deeper at its ends than at its middle, a form of structure which often seems clumsily industrial rather than lightweight and high-tech. That's no different here, and it's one of the least visually attractive of central Dublin’s bridges.

Remarkably, this seemingly prosaic design was the winner in a design contest with some 157 entries, and has since gone on to win multiple awards.

Perhaps this is a good thing, reminding us that designs don't have to be absurdly spectacular to merit selection. It's clearly trying to be slender and elegant, but one unfortunate consequence of slimming down all its constituent members is that they more closely resemble scaffold tubes.

The design seems to echo a number of other Liffey bridges by being arched, albeit extremely gently. In fact, it's a two-pinned portal bridge, with chunky portal legs hidden within "balcony" extensions to the river bank at either end, and supported on steel hinges.

I am torn between my initial impressions of this bridge, which are overwhelmingly negative, and a sense that it is perhaps in some way admirable in its restraint. Other opinions would be welcome! 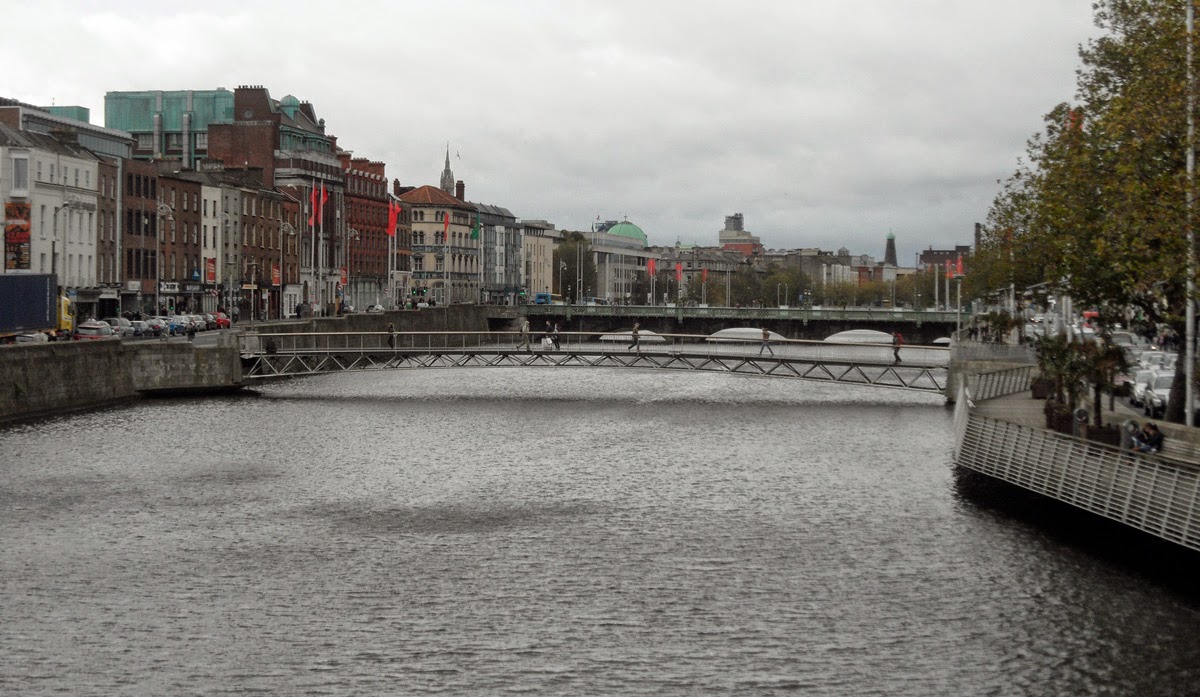 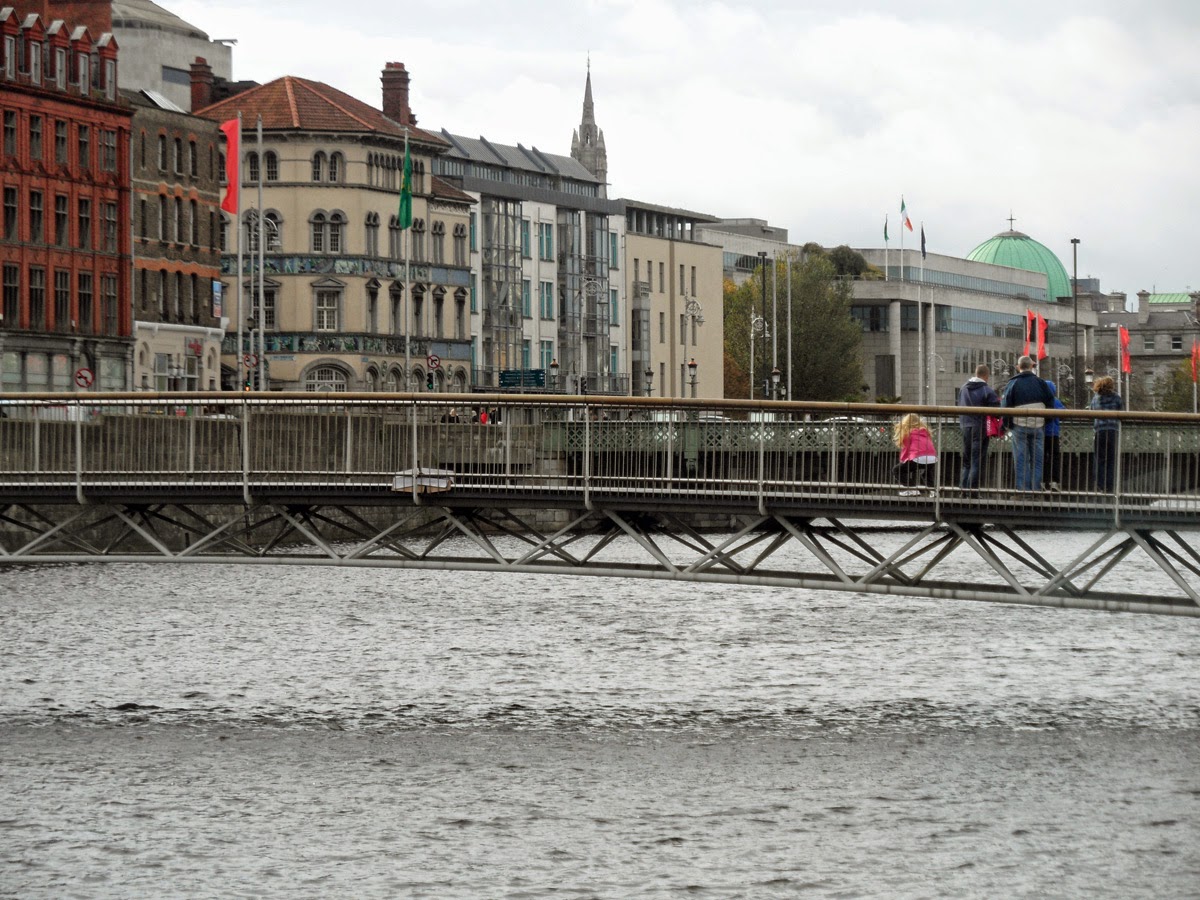 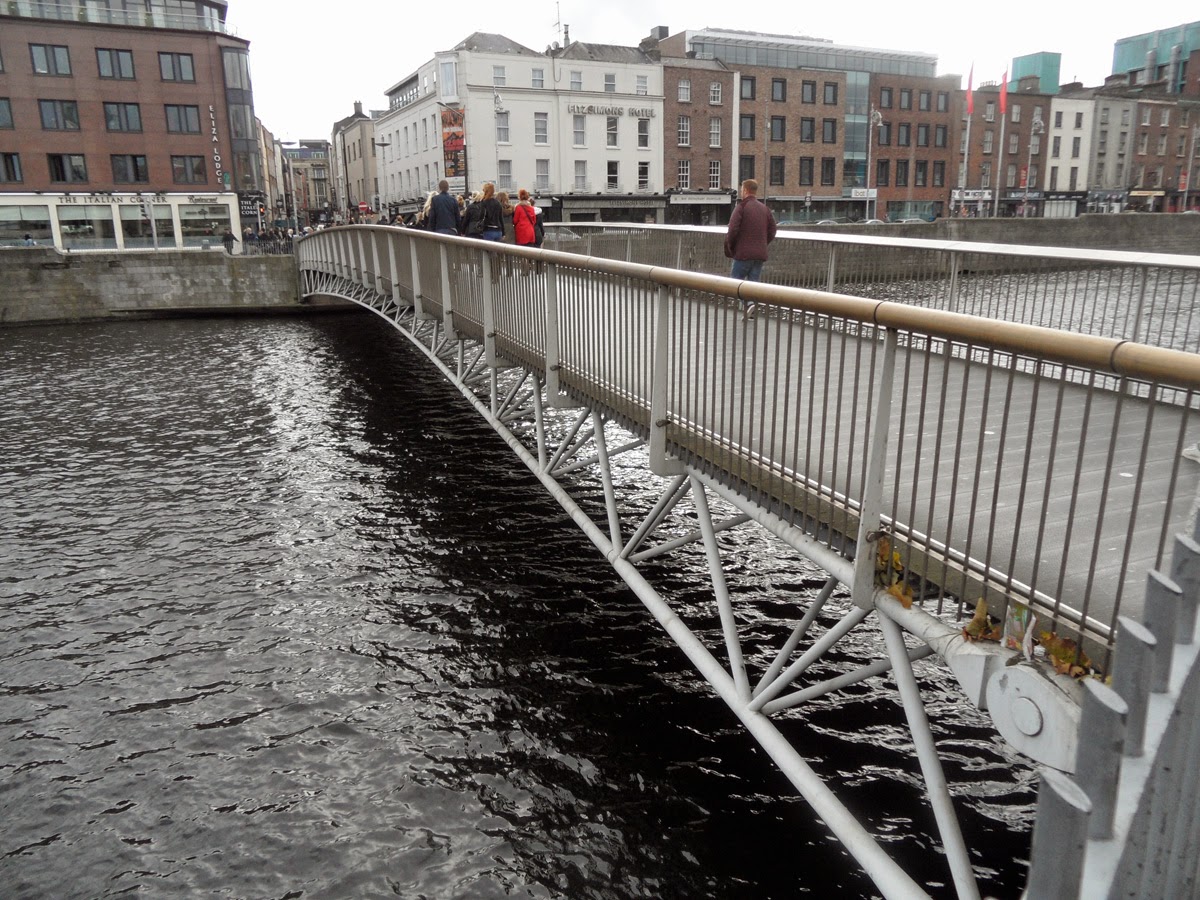 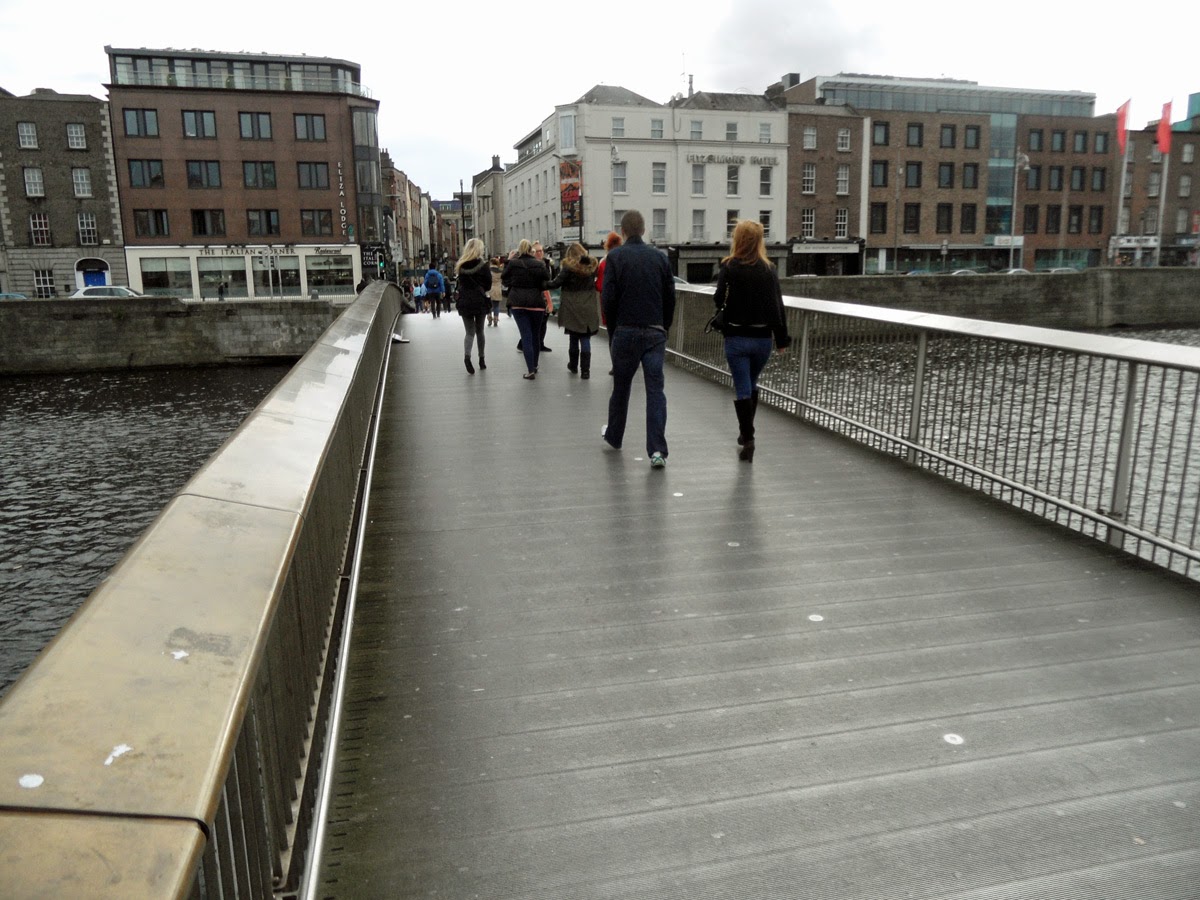 I had a flying visit to Dublin late last year, and have three bridges to cover here on the blog, all of them spanning the River Liffey.

The first, variously known as Liffey Bridge, the Metal Bridge, or the Halfpenny / Ha'penny Bridge, was built in 1816, Ireland's first iron bridge. It was imported from the Coalbrookdale foundry in Shropshire, England, and comprises a cast iron arch spanning 43m. When first built, a half-penny toll was charged to bridge users.

The bridge was extensively refurbished in 2001, but so far as I could tell on my visit, the bridge appears to have been very little altered.

I think this is a bridge which has aged well. The shallowness of the arch is bold and attractive, as is its shaping, with the slender crown and stout abutments. The pattern of the arch ribs seems more open and appealing than the criss-cross arch webs used on many other bridges of the time, and closely echoes Cantlop Bridge, built in England three years previously, and which was possibly designed by Thomas Telford.

I like the "two-layered" parapets, but the overhead ornamental lighting brackets are not to my taste. 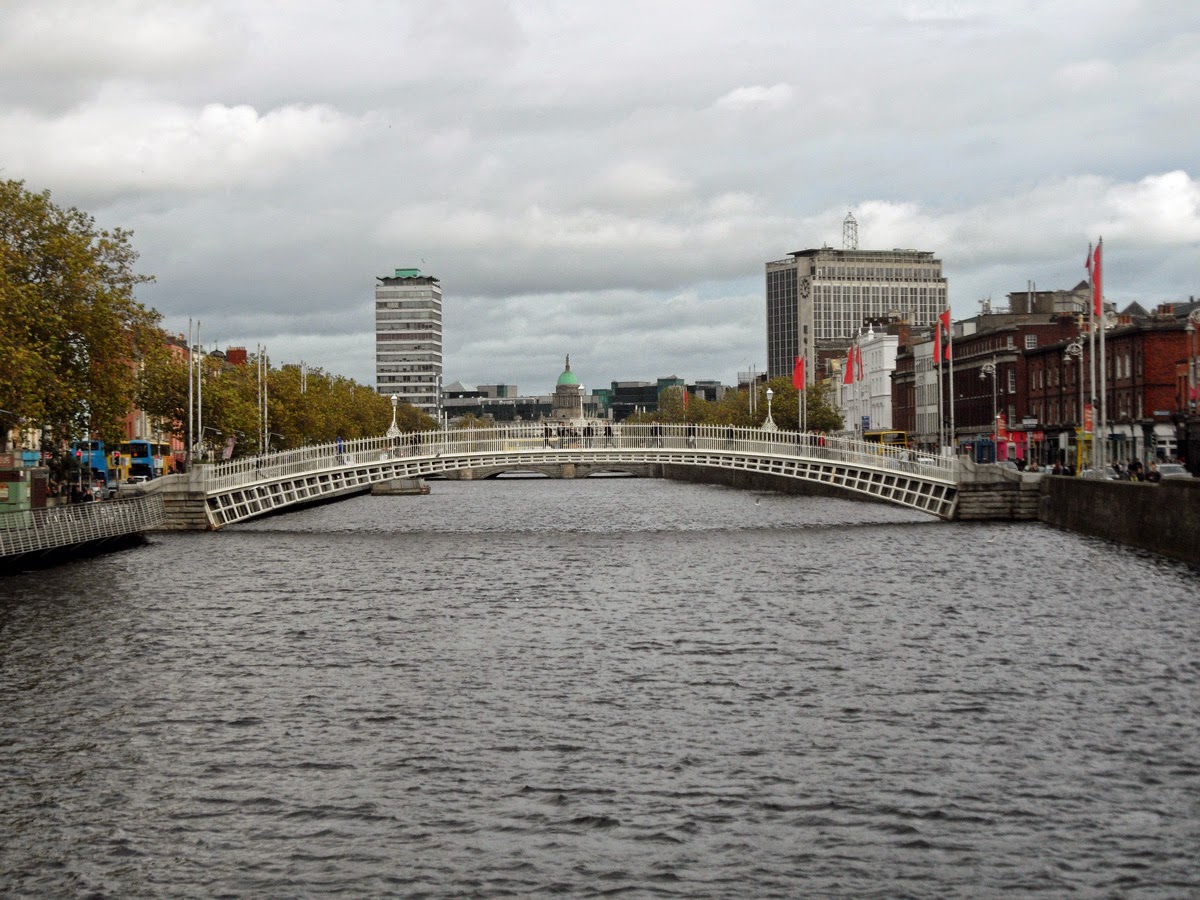 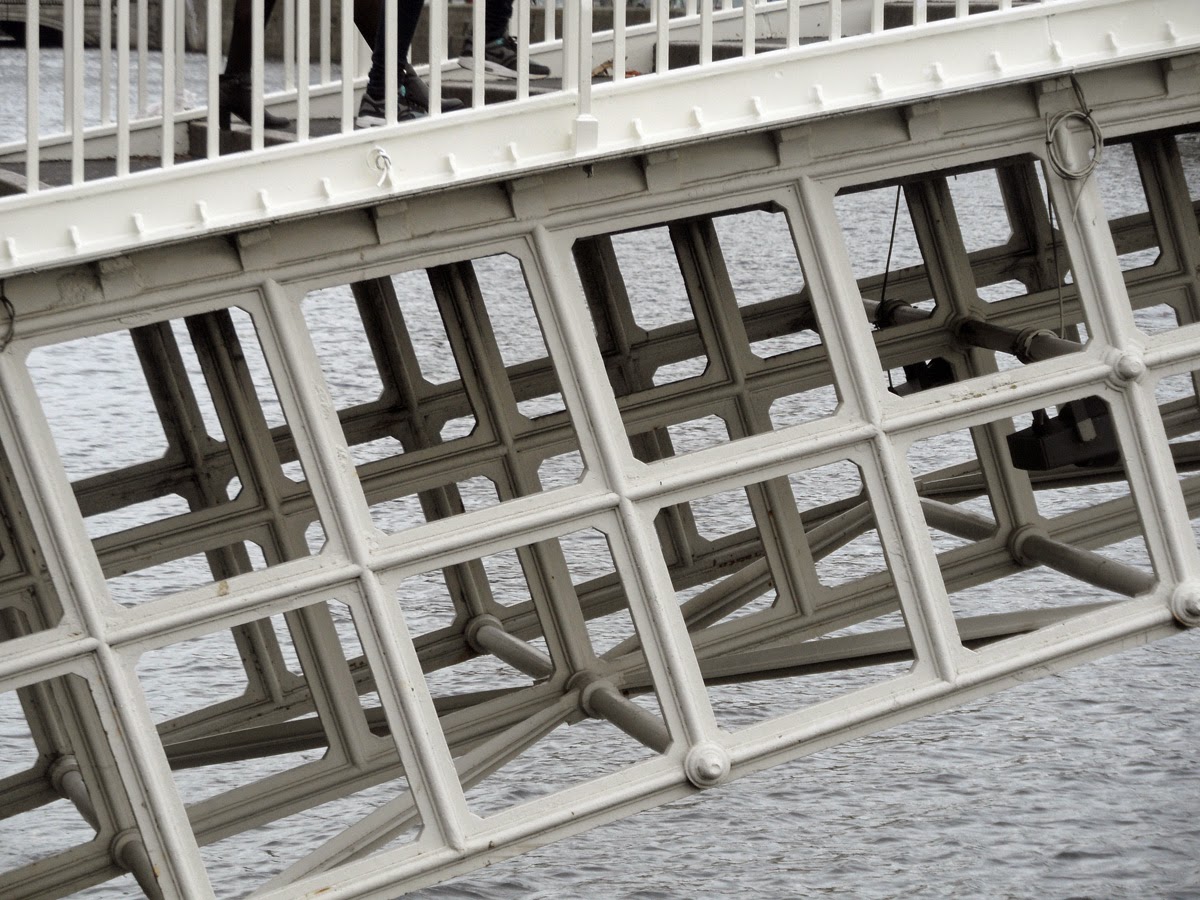 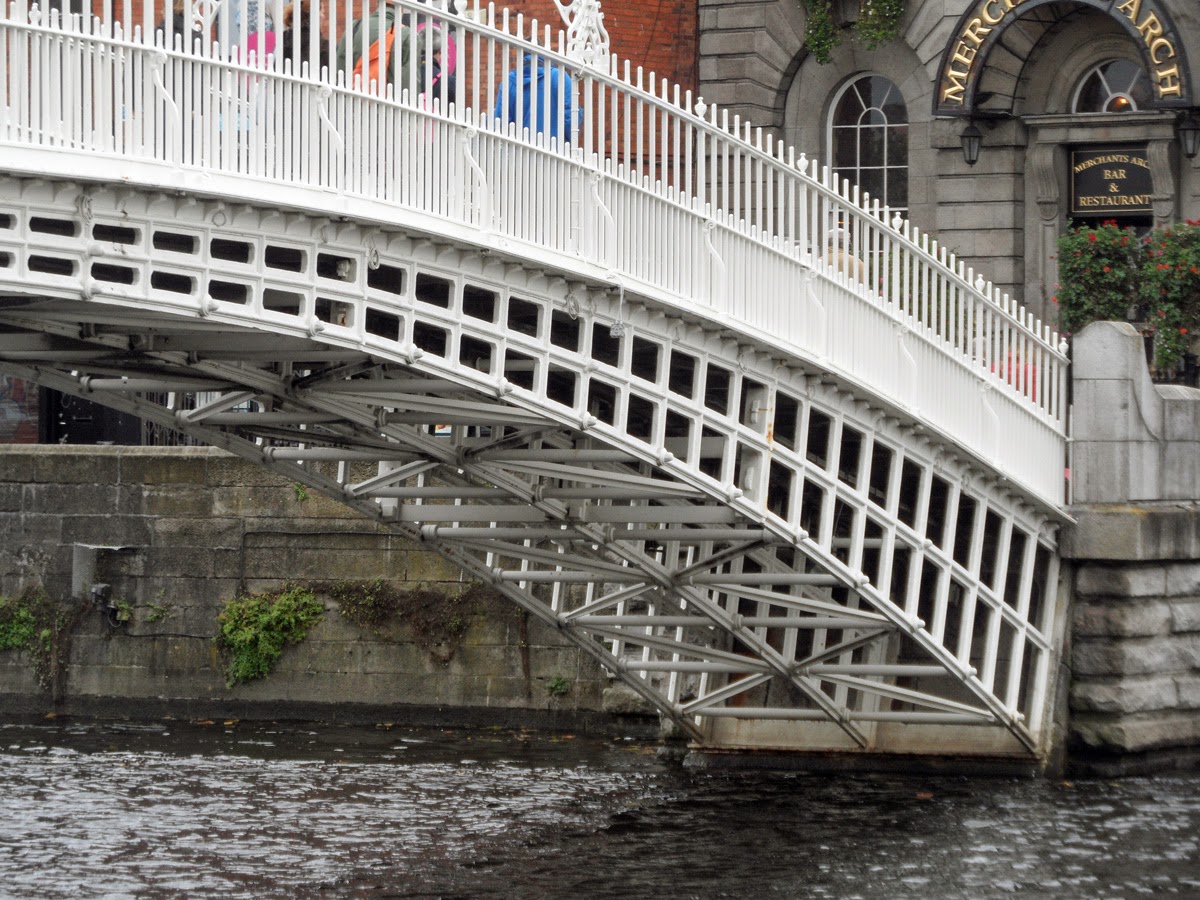 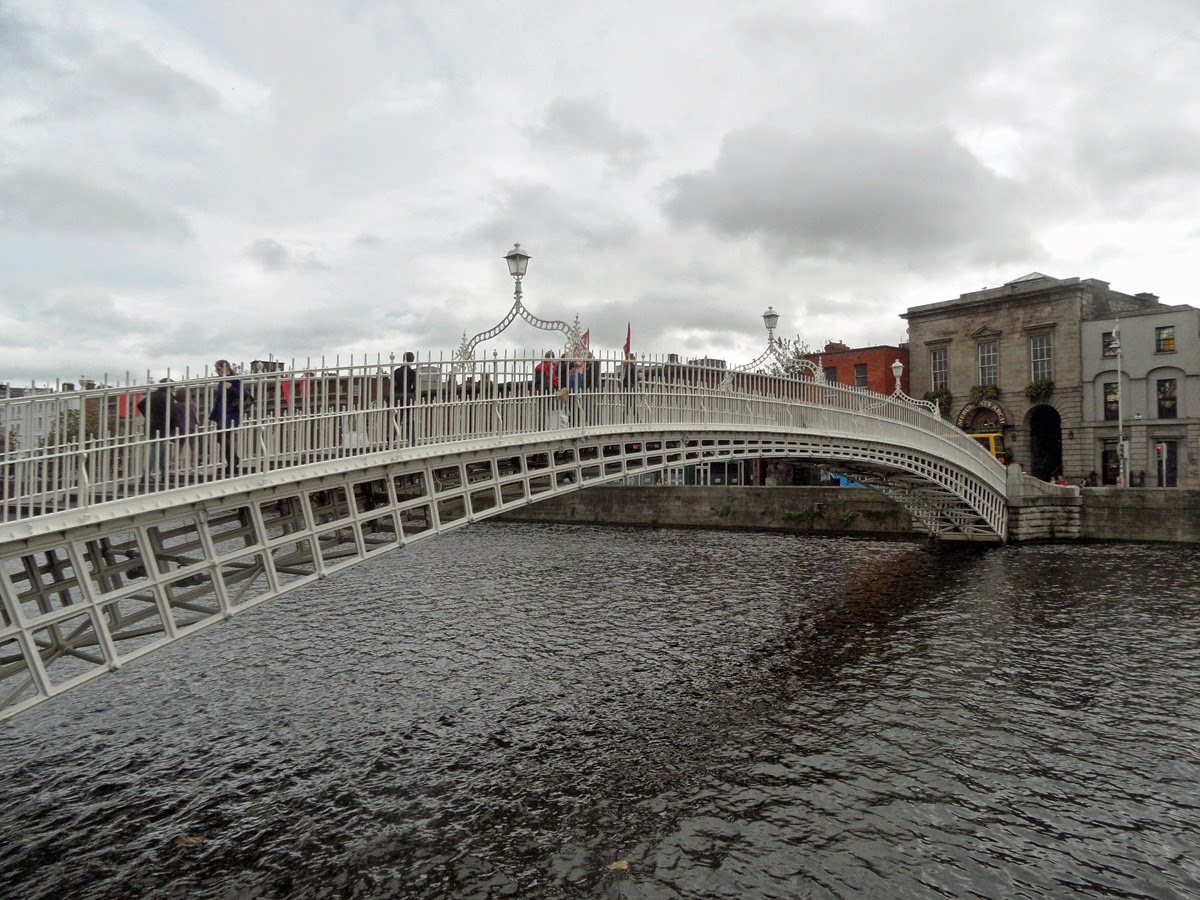 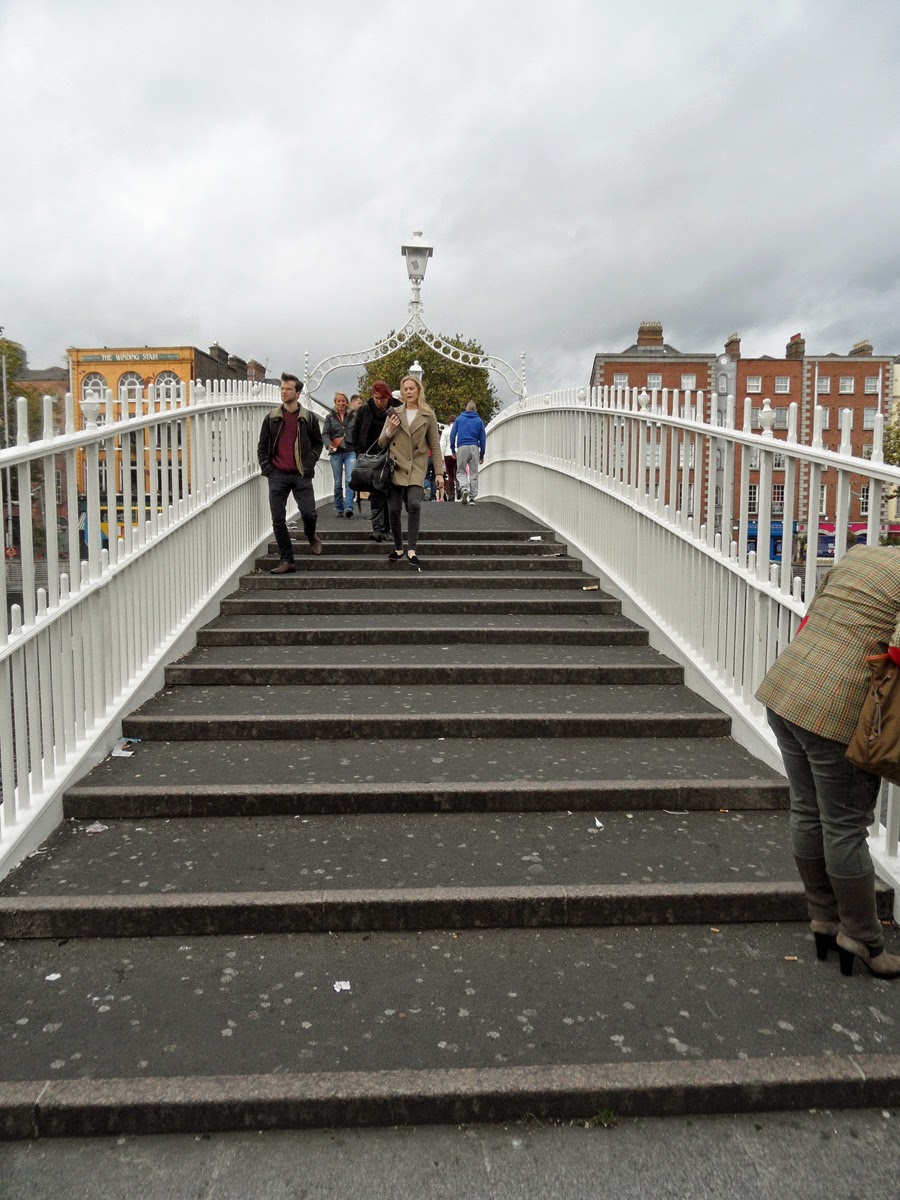 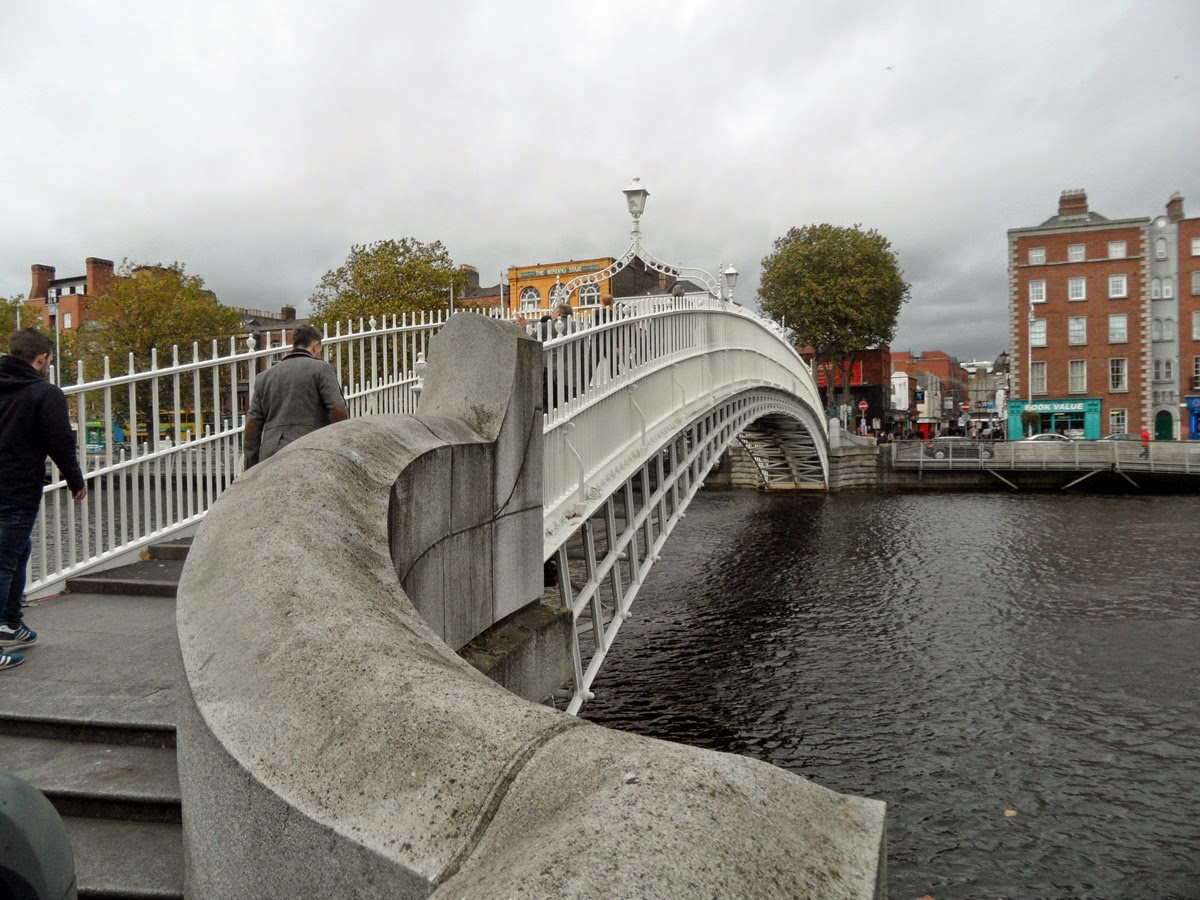 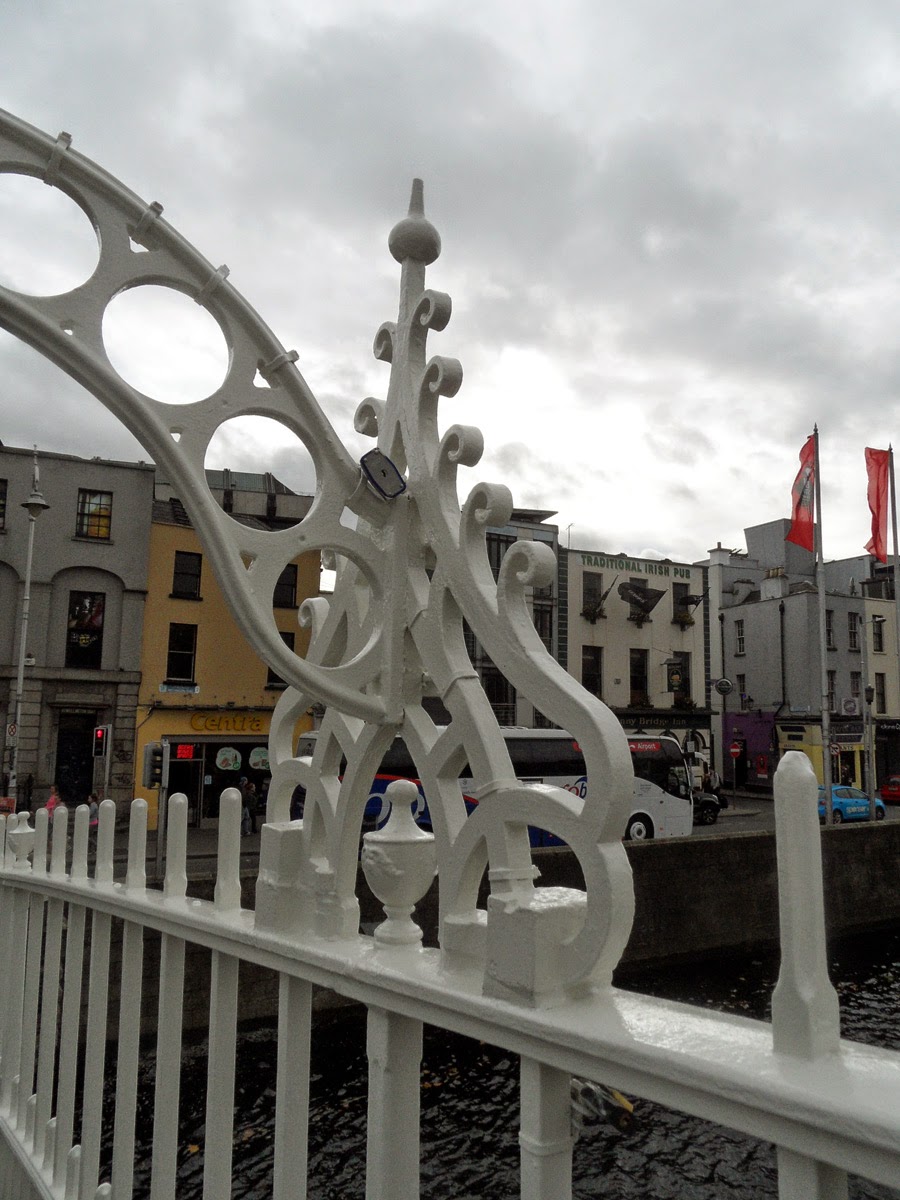 Posted by The Happy Pontist at 8:47 PM 2 comments:

London's Garden Bridge: to build, or not to build?

There's an excellent post about the London Garden Bridge on the Being Brunel blog, titled "Why do we hate the Garden Bridge?". I don't think the author has covered all the bases, and he seems far too well disposed to the possibility that this unspoiled spot on the Thames could reasonably be home to a private garden. However, it's well worth reading.

I've discussed the scheme here before a few times - I think its failings are primarily political rather than in the detail of its design. 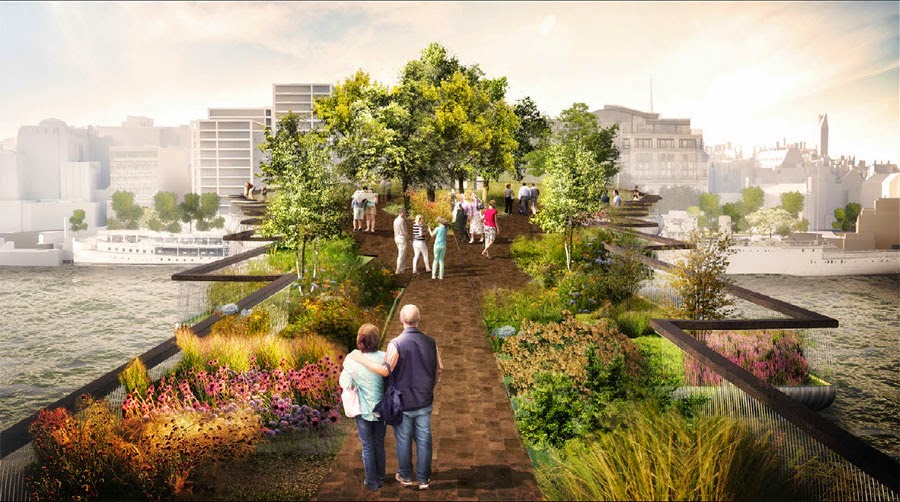 I'm interested in what others think: should the Garden Bridge be built? Will it get built? Please feel free to post in the comments.


If the Garden Bridge is not built, what else could usefully be done with the money?

For a start Wandsworth Council are planning a far more practical bridge between Pimlico and Nine Elms which is not yet fully funded. Various ideas for bridges over the Thames in East London also remain overwhelmingly popular with the public.

My reader (and author of an excellent encyclopaedia) David McFetrich posted in the comments to my last post with the following suggestion:


"If there is money available for a new 'fun' bridge in London, instead of the Garden Bridge (with its problems of high cost, impact on Thames views and questionable infrastructural benefit) why not build a replica of the medieval London Bridge? Since this could be built on dry land across a site that later became an artificial lake, it would be far cheaper to build, and it would generate its own income by letting out the shop space either side of the roadway and from entrance fees paid by visitors. The lake could even be surrounded by gardens. The main problem would be to find a sufficiently large space in a readily accessible part of London. Is there room at the new park where the Olympics were held?"

Now there's a question, which chimes well with Being Brunel's view that the proposal has merits as a garden, just not with public money or necessarily at its proposed site. Again, I'd be interested in comments - what do you think would make a sensible bridge-related alternative to the Garden Bridge?

I quite like the idea of a replica Old London Bridge, although I'm pretty sure there's no space at the former Olympic Park and there's an element of kitsch to it. It could be built for far less than the Garden Bridge, and raise rather than waste money by providing lettable space.
Posted by The Happy Pontist at 7:05 PM 2 comments:

There can be few contemporary bridge engineers who have been as well-celebrated in photographic coffee table tomes as the Swiss designer Jürg Conzett. Indeed, the only competitor in this arena is Santiago Calatrava, who is as inappropriate a comparator as could be found. 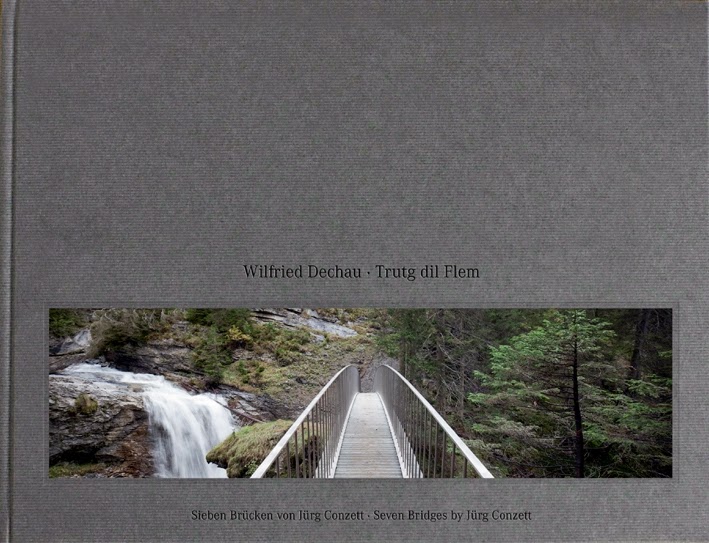 ] is the third book by photographer Wilfried Dechau to depict Conzett's bridges and the landscape in which they are set. I've previously reviewed Traversinersteg and Dorfbrücke Vals, both of which are excellent.

The Trutg dil Flem is a riverside pathway, along the River Flem north of Flims in south-eastern Switzerland. The pathway is a recent project, connecting up isolated and barely-walkable sections of path. This is only possible thanks to the construction of seven new pedestrian bridges, all designed by Jürg Conzett.

These are not especially spectacular structures, ranging in length from two to eighteen metres. They are only for use by visitors on foot, with the narrowest bridge being a mere 0.7m in width. Nor do they all exhibit the innovation for which Conzett is best known. Most are simple timber beam bridges, highly economic and suitable for the context, and in no way of particular architectural or engineering interest. They enable visitors to cross the stream, and also provide vantage points from which the surroundings can be better seen.

There are three bridges of greater interest. One is a tiny oval slab, with a bare handrail on one side only, originally conceived as a stone slab but built in concrete. It's so short as to barely be a bridge at all.

A second is a simple reinforced concrete beam, spanning 3.8m. The balustrades have cranked posts, projecting horizontally from the sides of the beam, then cranking vertically. This makes the concrete appear little more than a plank, and it looks great. It's also interesting how the balustrades continue off the bridge onto the approach staircases, which rise up the side slopes away from the bridge. 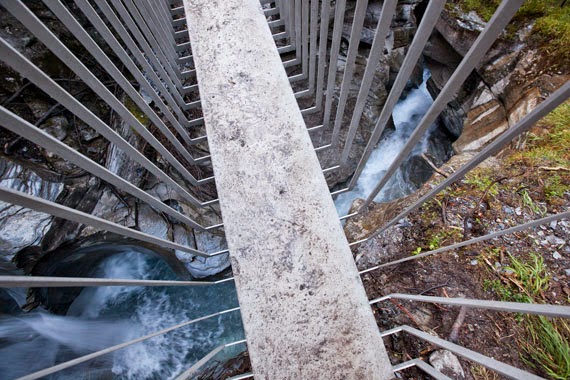 The third bridge is a very slender stone arch, almost a mirror image of Conzett's famous Punt da Suransuns. This was originally proposed as an 11m span, and drawn up as an arch of varying depth, thicker at the ends. The version eventually built spans 18m, and is equally slender over its entire length. This is made possible by using the lower rail of the stainless steel balustrade as a prestressing ribbon, pre-compressing the arch and enhancing its resistance to buckling failure. It's a marvellously ingenious solution, tremendously clever engineering in the service of minimalist beauty.

The book features a number of useful, if short, essays, in both German and English, including one by Conzett on the design of the arch bridge. His beautiful original drawings for each bridge are also included.

The bulk of the volume is taken up by Dechau's photographs, in two sections. The first documents the Trutg dil Flem and the completed bridges, giving priority to the landscape itself. It would clearly be a very attractive place to visit, and it's also clear that the bridges enhance the landscape, and are appropriate rather than showy.

The second section documents the construction of the bridges, and focuses as much on the builders as what was built. I found these a real pleasure to examine.

As with previous Dechau / Conzett books, Trutg dil Flem has been produced to a very high standard, it's a gorgeous book which well befits its subject.

See also:
Posted by The Happy Pontist at 9:34 PM No comments: