"Bridging the Tweed" by Jim Lyon


Hello readers. I'm back. Did I miss anything while I was away?

Bridging the Tweed (self-published, ISBN 978-1-5272-5384-1, 290pp) surveys the bridges of the River Tweed from its source in the Lowther Hills in southern Scotland, to Berwick-upon-Tweed, where it passes into the North Sea. 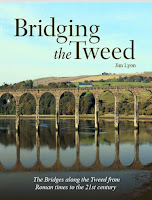 The author Jim Lyon was born in nearby Hawick, and spent many years as a civil engineer before retiring to the Tweed valley. For a time he worked as a bridge engineer for Maunsell, both in the UK and overseas.

His book took over a decade to write, and describing it as a "labour of love" would hardly do it justice. In addition to detailed accounts of every bridge over the river (including those no longer existing), it diverts (at length) to cover a wide range of related subjects, including historic towns, features of interest, and historic personalities. From time to time, it also wanders briefly up tributaries of the Tweed, allowing it to draw in fine bridges such as the Roxburgh Viaduct Footbridge and Twizel Bridge.

Some readers will love the frequent digressions while others may find them an irritant - it's certainly the case that no stone is left unturned in this book.

The book immediately makes clear what a remarkable heritage of bridges there is along the Tweed, and I was a little startled to discover that I've only reported on three of them, the suspension bridges at Gattonside and Dryburgh, and the Union Chain Bridge.

Many of the bridges are of course prosaic, but even amongst the lesser-known bridges, the author explains how a bridge originally intended to be built in South Sudan came to span the Tweed, discusses a bridge used mainly by sheep, and documents a plastic composite bridge made from recycled milk bottles and car bumpers.

Particularly notable bridges featured in the book include the old bridge at Peebles, the pioneering Kingsmeadows, Galashiels and Dryburgh bridges, Leaderfoot Viaduct, Kalemouth Suspension Bridge, Kelso Bridge, Coldstream Bridge, and the trio of bridges at Berwick. Amongst many bridges that were new to me I'd highlight the unusual and innovative Woodend Footbridge, the charming Ashiestiel Bridge, and the impressive shallow arches of Mertoun Road Bridge.

As just one example of the many bridge-related tales in the book, there is plenty of detail on how celebrated architect Basil Spence and world-famous engineer Ralph Freeman designed but failed to complete a bridge in Peebles, quite a sorry tale of hubris and muddle.

Characters who appear in the book include many famous bridge-builders such as Brown, Stephenson, Telford, Rennie, Smeaton, Adam Clark, Fairbairn, Robert and William Mylne, John Miller, and of course the unfortunate Ralph Freeman. Amongst the others who have played a part in Tweed history (including its bridges) are Robert Burns, Sir Walter Scott, Earl Haig, Mary Somerville, and Sir Thomas Makdougall Brisbane. They each get a turn in the spotlight, alongside a lesser-known cast such as the county surveyor whose mother fell victim to an axe-murderer, and the Johannesburg mayor who funded a new bridge across the river.

For a self-published book, it is generally of very good quality, well written and illustrated with plenty of colour photographs and images. There are occasional gremlins such as misplaced photo captions, and although there is a comprehensive bibliography, the lack of referencing is a disappointment - it looks like the draft text included references but these were omitted in the published version.

My only other quibble is that there is (relatively) little about the river itself, its wildlife or ecology. The majority of the book focuses on human artefacts and human goings-on. Nonetheless, this book should be valuable both to armchair pontists and those interested in the history of the Tweed Valley. It is not widely available, but at the time of writing this post, Main Street Books have it for sale online.
Posted by The Happy Pontist at 6:00 PM 2 comments: