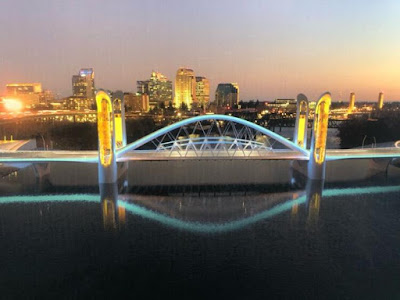 The final design has recently been revealed for a new I-Street Bridge in Sacramento, California. Designed by T. Y. Lin, the new lift bridge is expected to cost up to US$210m, with completion expected in 2025.

The design is a 300-foot span lift bridge in the form of an arch. According to bridge architect Noel Shamble "it is a lift bridge and an arch bridge combined together, which is the first of its kind in the world". (Of course, it isn't, at least not by virtue of this particular combination, anyway).

The bridge will supplement an existing trussed swing bridge, built in 1911, which carries a railway through the truss and a roadway on top (picture courtesy Michael Hicks / Wikimedia Commons). It is proposed to retain the old bridge for railway traffic and possibly also pedestrians and cyclists, while demolishing its extensive highway approach viaducts.

The new bridge will carry cars, cyclists, pedestrians and transit vehicles. Approximately $150m of the cost will be funded by federal or state sources, which perhaps explains why Sacramento have decided they can afford such an ambitious design.

At first glance, the design visuals indicate an arch with inclined hangers, from which a truss is suspended. Oddly, the truss is cut short and doesn't run the full length of the span.

The choice of final design had been the subject of an extensive public consultation process, with T.Y. Lin developing a total of four designs, two variants each of two bridge types: a Nielsen-Lohse arch, and a truss span. These had already been whittled down from a wider range of concepts, presumably by virtue of being the cheapest two. Two of the final options are shown here: 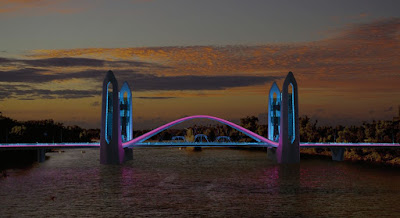 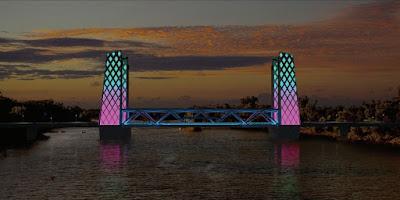 My first thought on seeing the final bridge proposal was that the designer had been forced to create some kind of Frankensteinian hybrid of the previous options, a combined truss and arch. This makes little structural sense, as the criss-crossing hangers of the Nielsen-Lohse arch already provide enhanced stiffness, and visually the truss seems to be an afterthought, as in the visual below. It made me wonder whether the outcome was some kind of horrible compromise intended to satisfy as many different views from the public consultation as possible. 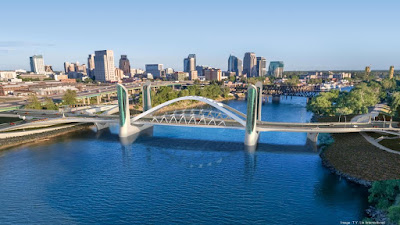 Reviewing the images in more detail, it becomes clear that the "truss" elements are not what they initially seem: they are supports to overhead canopies, with giant triangular frames forming part of cantilever canopy brackets. There is no truss. 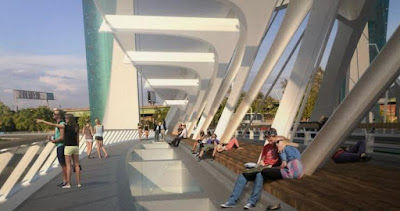 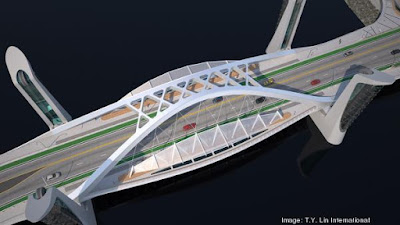 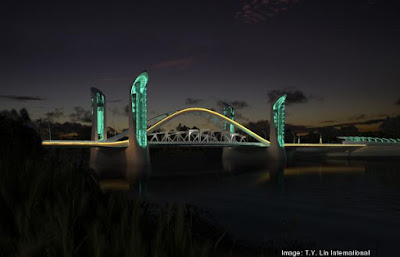 The bridge project could have turned out very differently. The original forecast cost was from $70-80m. In 2018, the budget was reported as doubling to $172m, following the US Coast Guard's insistence on a span substantially wider than that provided by the existing bridge. At that time, the Cities of Sacramento and West Sacramento expected to contribute only around $3-4m of the total cost, with the rest coming from external government bodies.

This kind of highly-leveraged funding has a chequered history, and it's easy to see the ambitious design struggling to get built if external funding is reduced or if the estimated cost rises further. As yet, there appears to have been no contractor input of any kind, so they'll only know if they have financial issues when construction tenders come in.

T.Y. Lin had been appointed in 2018 following a design competition, with eye-catching proposals such as a solar-power bridge (the arch does not support the deck in this design), or towers with observation decks, or a bridge with gardens on it. 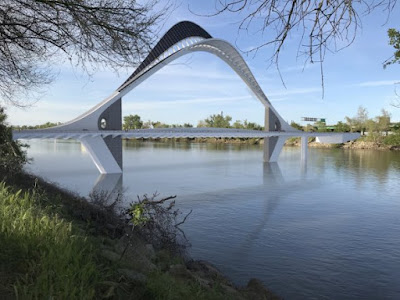 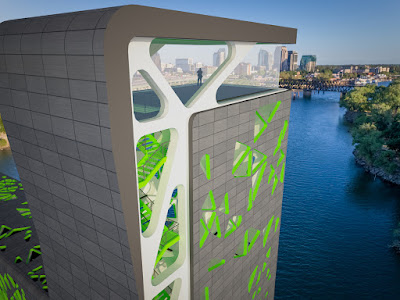 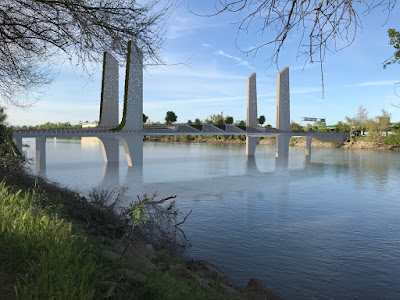 Having won the contest, the garden and solar panels bit the dust when costs of different options were compared. I'm not sure if the observation decks are now excluded as well.

I haven't been able to find the names of the other design contest participants, but some of their designs were shown on Twitter:


Looking further back, the project didn't start out with a design competition. Back in 2014, San Francisco-based bridge architect Donald MacDonald had been appointed to help develop ideas for the new bridge. In 2017, Sacramento writer Rob Turner felt the MacDonald designs (shown below) weren't up to scratch, campaigning via the Sacramento Bee and Sactown Magazine for the design process to be halted, MacDonald to be thrown off the job, and for a design competition to take place instead. 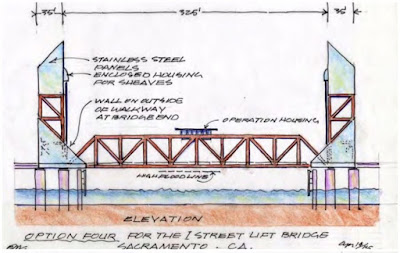 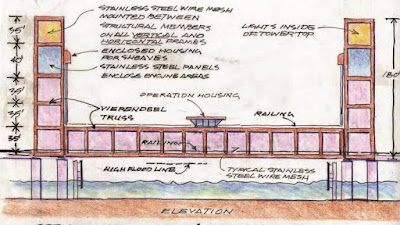 Turner argued that MacDonald's designs were too deferential to the past, "pleasing" rather than aspirational. He illustrated his argument with images of expensive, overblown and largely irrational designs such as the Juscelino Kubitschek Bridge, Sheikh Zayed Bridge and the unbuilt San Shan Bridge, and praised Calatrava's Sundial Bridge, which had to be privately-funded when costs ballooned well-beyond the original budget. He identified Ipswich's appointment of Foster and Partners to design an iconic bridge as a successful precedent (he could hardly have guessed it would end in ignominious failure as costs rose beyond what could be afforded).

The City of Sacramento proceeded in line with Turner's advice, switching to a design competition, leading ultimately to the newly unveiled design, and a budget now potentially three times what they originally expected. Comparing MacDonald's hand-drawn sketches to the seductive visualisations that came later, it's easy to see why the project client (and perhaps the public) may have changed tack.

It will, as always, be interesting to see how the project fares over the next few years. The proposed structure, despite initial appearances, is broadly rational, with the potential to be a high-quality landmark rather than an inappropriate extravagance. I do wonder, though, whether the promoters have been seduced by a vision well beyond their original requirements, and whether it will get built as currently illustrated. 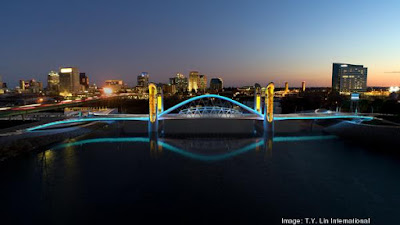 Posted by The Happy Pontist at 8:42 PM No comments: