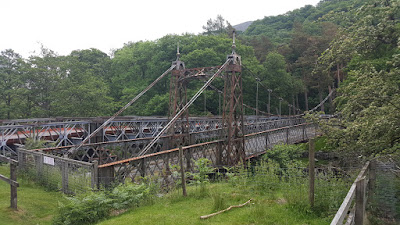 The previous two structures I covered are bridges on dams in the Elan Valley. Continuing down the valley, this next bridge can be found not far beyond the lowest of the valley's dams.

According to the Welsh National Monuments Record website Coflein, this is a "cast iron suspension bridge built 1904 by David Rowell and Co", citing the source as J. Groucott's "Industrial Monuments of Powys - bridges" (1980). Coflein also states that the bridge has been replaced twice. I can find no other evidence regarding the bridge's history, but the construction date, if correct, would indicate that it was built as part of the Elan Valley reservoir project.

With its distinctive latticework towers topped by pointed finials, it certainly looks like a David Rowell and Co bridge. I've visited one previously and will get to two more later in this series of posts. They generally have a consistent style. The width of the towers below deck level is the only feature which makes this one especially different.

Clearly, Coflein is wrong about it being "cast iron" but never mind - it's very probably early steel.

The towers support the deck using two suspension cables on each side, which is more than normal on a Rowell bridge.

The cables are carried across the towers over little saddles clearly visible under the tower caps. These are often hidden on similar bridges. At the end anchorages, the cables are anchored into a twin-bar fitting, with a U-bend looped around a triple-plate anchorage detail. This is not something I've seen on this type of bridge before, so either it is an unusual detail, or it's a standard detail which would normally be buried out of sight.

This bridge is not in good shape, indeed it has been closed off since 1988, bypassed by a "temporary" Bailey Bridge immediately to one side. It is rusty and seems to have received little or no maintenance in recent times.

In 2004, it was reported that the bridge would not be taken down, which is nice, given that it is historic and all. Sadly, it is not under kind of heritage designation, which is a shame, as there are not many surviving Rowell bridges built to carry vehicles, most were footbridges.

In 2012, the local authority was in discussion with the bridge owner, Elan Valley Trust, about how it might be restored. Discussions were reported to be ongoing, but unsurprisingly, there is little further news. The money simply isn't there to take on this kind of project in the current political climate.

The problem for this bridge, of course, is that the longer it is left without any kind of maintenance, the more expensive any eventual refurbishment becomes, with greater loss of steel section to corrosion likely to require difficult strengthening work. If money were available, it would be better to carry out a minimal refurbishment earlier, to at least arrest further deterioration. 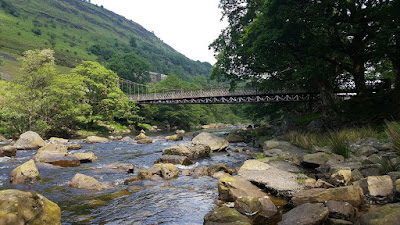 Posted by The Happy Pontist at 10:10 PM No comments: 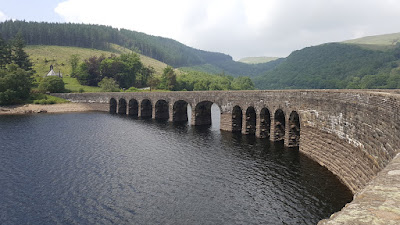 Garreg-Ddu Bridge is a Grade II* Listed viaduct built circa 1900 as part of the Elan Valley reservoir project.

When I first saw this bridge, I was puzzled by several aspects of its construction. It spans a wide reservoir, which seems odd, as it would surely have been cheaper to build a bridge at a narrower point. It is curved in plan, rather than running straight across the water. The width of the spans is irregular, with a series of much shorter spans at one end. 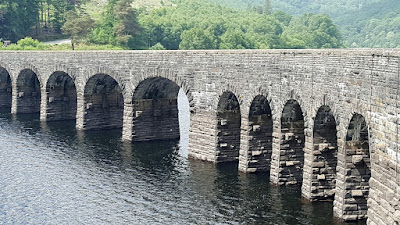 The stonework is similar to the Craig Goch Dam bridge, although there are fewer ornate details, and at least one odd difference: there are significant projecting stones visible in the piers which did not feature at Craig Goch.

The answer to the puzzle is that the bridge is supported on a hidden dam. The crest of the dam is submerged well below the surface of the reservoir, and would only normally be visible following a prolonged drought. The intention is to ensure that some water is available from the reservoir even when levels have dropped dramatically: further down this reservoir, the bed level is too low. 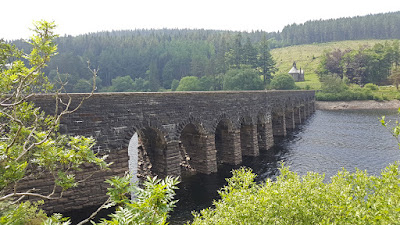 Garreg-ddu Bridge hence has much taller support piers than Craig Goch, which explains the need for projecting stonework to support arch centring during construction: at Craig Coch, the centring would have been supported directly off the body of the dam.

I still don't have an explanation for why some spans at one end are much shorter than the others. Comment if you have any idea.

Coflein has some great photos of the bridge under construction, as well as one at low water level. 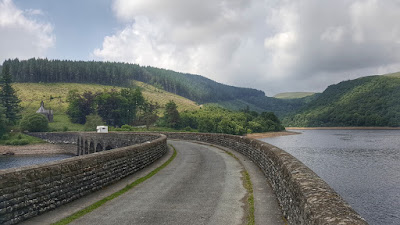 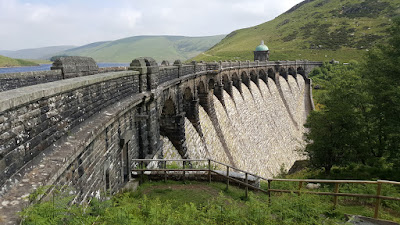 Craig Goch Dam is the uppermost of a series of dams built in the Elan Valley from 1893 to 1904. Most of these dams are simple spillways, and this is the only one with an exposed spillway and a viaduct across the crest. Together, this Grade II* Listed dam and bridge are both spectacular and very beautiful. 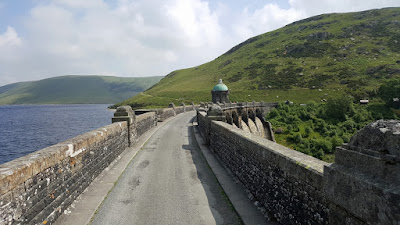 The other Elan Valley dams are also well worth visiting, but in the absence of bridges I won't be featuring them here. Someone else will have to start their own blog. "Weir Weirdos", I suggest. 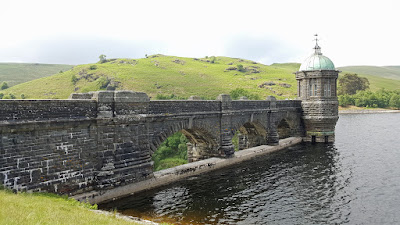 The Elan Valley dams and reservoirs were constructed under the direction of engineer James Mansergh on behalf of the Corporation of Birmingham, a city some 75 miles away. Water carried from the Elan reservoirs apparently takes about a day and a half to reach Birmingham, all by gravity flow. 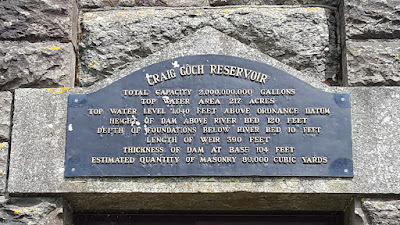 The dam is some 156m long, 36m tall, and 32m thick at its base, a masonry giant surmounted by 13 segmental arch spans. Note that I've taken the 156m figure from an information board nearby - the plaque picture above gives a shorter length for the "length of weir". 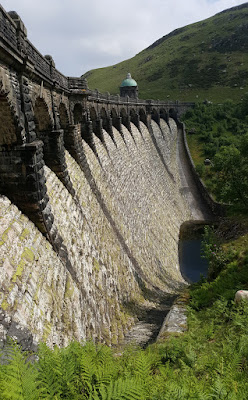 It's a beautiful and very well-put-together structure. The viaduct piers merge smoothly into the curved profile of the dam spillway, and the contrast between the spillway's smooth stone facing and the viaduct's rough stone facing is effective (although I think this is the effect of many years of water flow, not an original feature). 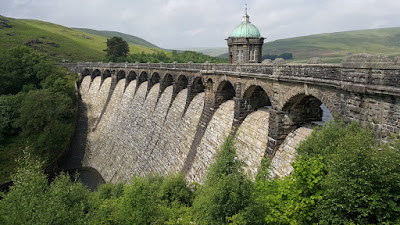 The detailing of the viaduct is admirable in pretty much every respect, and doubly so on the lovely octagonal valve tower. 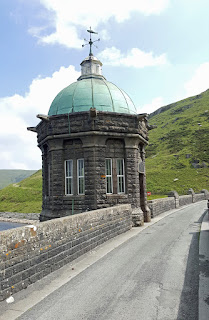 The viaduct is masonry faced on its elevations, but with a narrow band of brickwork forming the arch barrels in between. There are drain holes at every span in the roadway, and surface water drains out through the piers directly onto the dam spillway. 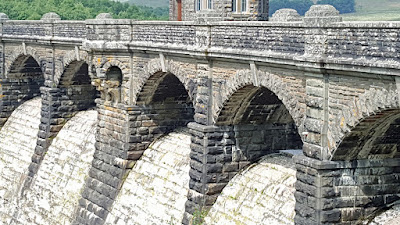 The view downstream from the dam is spectacular, and the road journey from here westwards through the beautiful hills to Cymystwyth is also recommended (I had come that way after visiting Llanilar Suspension Bridge). 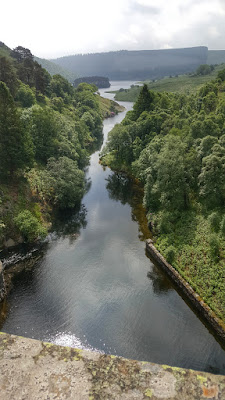 The Coflein website has aerial photos, as well as some photographs of the dam under construction.

Posted by The Happy Pontist at 8:48 PM No comments:

I recently spent a day visiting a selection of bridges in Wales, so here is the first in a series of posts. 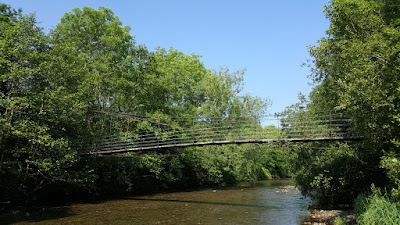 The first bridge is an unusual footbridge at Llanilar, 6 miles south-east of Aberystwyth. It spans the Ystwyth River.

The Ystwyth foot and cycle trail runs alongside the river here, following the line of the old Manchester to Milford Railway Line. Llanilar Suspension Bridge connects the two river banks, providing access to and from a smaller path on the other side of the river.

The bridge has two structural systems superimposed. It seems that the suspension bridge arrangement is the original, and was supplemented later by cable stays.

The bridge deck is unstiffened, and even with the use of two support systems is prone to significant movement under load, as can be seen in my video below. The stay cable system is not strongly tensioned, which means it is probably contributing very little to stiffness.

The bridge masts are slender joists, held in position laterally by only a single crossbar. The function of this bar seems to be only partly as transverse bracing, but mainly to support pulley wheels, over which the main suspension cables are slung.

I haven’t seen this arrangement on a suspension bridge before, and I don’t know whether it is unique in the UK, or just highly unusual. It's not a good design for such slender masts: the cables provide no longitudinal restraint to the masts, and the bridge will move more under thermal expansion and contraction of the cables than if the cables were clamped to conventional mast saddles.

The deck is suspended from the main cables by hangers comprising flat plates, incorporating a twist to allow them to double as the fence posts. These are attached to the cable with simple clamps, and to channel-section deck transoms via bolted connection plates. In the middle part of the bridge, every fence post is also a hanger, but towards the ends only every second fence post is a hanger.

The timber deck planks bear directly on the metal transoms – there is not even the most minimal of metal edge members. The structural integrity of the bridge is therefore dependent on what should be a secondary element, the deck planks.

The stay cables are attached to the main masts with shackles and cable hooks, and to the deck with shackles and threaded eye-bolts. The jumbled array of attachments makes it very clear that these are an improvised addition to the bridge.

Cable-stayed bridges normally require a stiff deck to carry the compression forces which balance the longitudinal tension in the stay cables. The deck of this bridge cannot carry any substantial compression force, so an alternative arrangement has been devised, which connects the three places where stay cables meet the deck with two pairs of horizontal cables.

The tension in the stays is therefore balanced by tension in these additional cables. The balance cables can be seen to be sagging considerably, indicating that the stay cables have little tension in them. The diagram above shows the cable arrangement, with the suspension system in blue and the stay system in orange.

I have found no information on when this structure was designed or built, or by whom. I'd love to learn more about its history. If it's old enough, it should be Listed, in view of the highly unusual detailing. 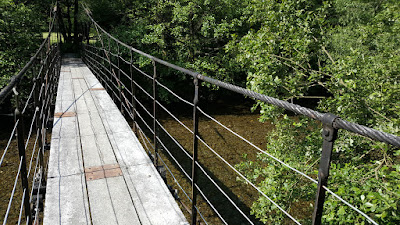 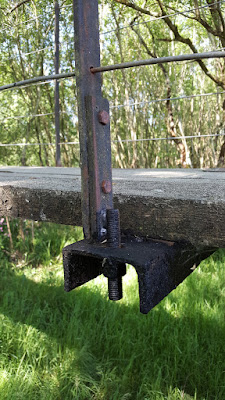 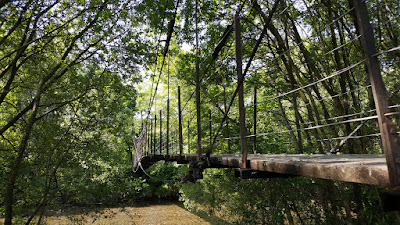 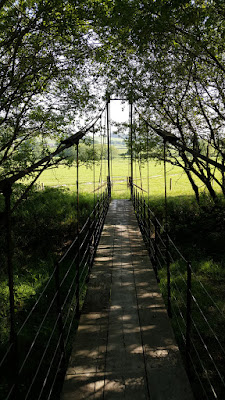 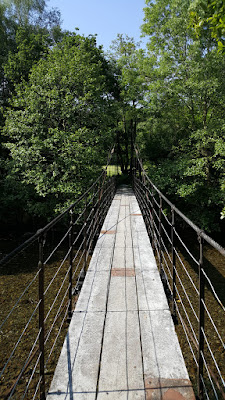 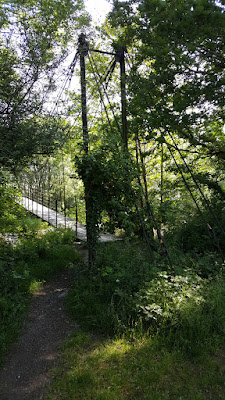 Posted by The Happy Pontist at 9:10 PM 4 comments: