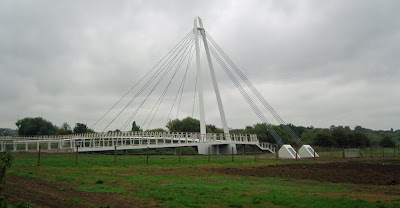 Diglis Bridge is one of a series of structures being built around the country with funding from Sustrans, who secured £50m of government money in late 2007 for their nationwide Connect2 scheme. I've recently featured another example, in Bradford. The Diglis bridge links cycleways and footpaths across the River Severn in south Worcester. It struck me that there are surprisingly few bridges in Worcester over the Severn, with this being the second of two footbridges to be built, and with there being only one highway bridge within the urban area.

It's the most modern of the various bridges I saw in Worcestershire, indeed, they had only just opened it in time for my visit (it opened on 20th July). The 66m span bridge cost £1.8m, and was built by Alun Griffiths to a design by Yee Associates and Mott MacDonald. The steelwork was fabricated by Rowecord.

The bridge's 28m tall steel A-frame pylon inclines toward the river at 22.5°. I'm not sure whether that's for engineering, aesthetic, or commercial reasons.

In terms of the structural engineering, it complicates erection of the bridge, but makes the cables slightly more effective in supporting the bridge deck, as they are closer to the vertical. However, the rear cables are less efficient, as their angle to the tower is reduced, and they must also support part of the weight of the tower. Writing in 1977, Michael Troitsky knew of only one cable-stayed bridge with a tower inclined towards the span (the Batman Bridge, in Tasmania), and I think it's probably still very rare today. 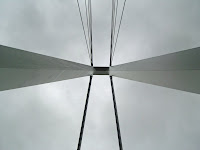 Aesthetically, I think it looks somewhat awkward. I instinctively feel that the tower should look as though it is helping to hold up the bridge. If it is going to incline, it should tilt away from the span, like a man leaning back to pull the reins on a horse.

I suspect, however, that the real reason is commercial - it may allow the cable back-stay anchorage to be brought closer to the foot of the tower, which can reduce the need to purchase additional land.

The pylon legs and the pylon crossbeam are both diamond-shaped in cross-section, as are the main deck edge members. It's an attractive feature, in particular bringing the edge of the deck to a nice crisp edge. However, looking closely along the edge of the deck, it's apparent they didn't quite manage to achieve a perfect smooth curve when the various deck sections were bolted together (it looks like it's fully welded, but the project's construction newsletters say that bolted joints are hidden under cover plates).

The pier at the end of the deck continues the diamond section theme, but unfortunately the approach ramps do not, leading to an untidy junction as shown on the photograph on the left.

The rest of the bridge is unexceptional although reasonably well detailed. The bridge decking consists of aluminium planks, while the parapets are of a post-and-wire type that's now very common, with the main feature of interest being the "Y"-shaped arrangement for the posts (surely not a nod to the architect's surname?) Lighting is recessed into the parapet handrails, as now seems de rigueur.

Overall, it's an unspectacular but attractive structure. It wasn't especially busy when I visited, but to a certain extent it's just one stage in a wider plan to expand footway and cycle links south from Worcester along the Severn. It will be interesting to contrast it with Worcester's other cable-stayed footbridge, which I'll cover in the next post.

a) I think you should write a book. (Seriously!)

b) I hope your family still remembers who you are and not as the odd person if front of the computer!

It's amazing how much you can get written late at night, over lunch, or on the laptop while travelling. Many of these posts are written several days before they actually appear.

My family does help out a little by putting up with the occasional bridge visit while travelling ...

As for a book, I certainly don't have the time right now, maybe when I retire! Blogging fits nicely into the cracks but I have too many other irons in the fire at present.