The Architect's Journal has revealed that a "funding shortfall" has prevented progress on Salford City Council's Salford Meadows footbridge.

The bridge proposal is a design by Tonkin Liu and Arup, which was the winner of a RIBA design competition, back in January 2014. 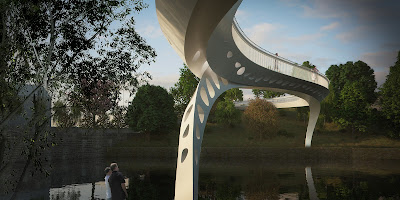 It's a sinuous steel bridge, curved in plan and supported on legs of silver Emmental (well, actually steel box girders with cylindrical perforations).

When I first mentioned this contest in June 2013, I noted that it had grown out of a feasibility study identifying a possible budget of £1m to £1.8m. I said: "The first question is whether there's sufficient political will, and funding available, to ever build a bridge at this site ... Salford say they are looking for an 'iconic' structure, but it's far from clear whether they have the appetite for an 'iconic' cost."

After the winner was declared, I commented: "There's little in the contest submission to provide confidence that what is depicted can be delivered at a reasonable level of quality, and I think there's absolutely no chance of it being done for the £2m figure that the designer states ... There must be a strong possibility it will also end up as unbuilt".

I understand that after winning the competition, Tonkin Liu were commissioned to develop the design further, but the AJ makes clear that it has not yet been submitted for planning consent, as Salford have yet to secure sufficient funding. Salford's mayor, Paul Dennett, is looking to fund the bridge from Section 106 planning contributions (essentially a tax on nearby developments), along with external infrastructure funding from central government.

The bridge proposal was always somewhat speculative - it would provide very useful access from one of Salford's main roads to the Salford Meadows area, but can only be a luxury in current economic circumstances. It was always clear that the money didn't exist to build it, and that its future was entirely dependent on economic whim.

That's something of a shame not only for Arup and Tonkin Liu, but also for the other 171 competitors who devoted significant time and energy to offering ideas for this bridge scheme.

Posted by The Happy Pontist at 10:46 PM No comments:

Now my sentiments have been echoed in the Architect's Journal, with a number of prominent architects speaking out against the manner in which the contest has been organised.

Cezary Bednarski states that "rather than promoting and facilitating collaborative effort – the only way in which outstanding bridges can be designed – it sets architects against engineers." He comments on the fact that the appointed project engineer does not work with the competing architects at competition stage.

A similar point is made by Chris Medland: "‘A pure design response to creating a crossing fundamentally requires an architect to collaborate with a structural engineer at the outset."

The best suggestion comes from Ian Ritchie, with the idea that the contest would be better run directly by the project's engineer to allow them to choose an appropriate project partner.

Well-known bridge architect, and member of RIBA's Competitions Task Group, Martin Knight, is the only interviewee to defend the competition. He argues that it's an opportunity opened to architects which would not otherwise have been available through the client's consultancy framework.

This is not a reasonable defence: there was nothing stopping the engineer from working directly with any subconsultant architect they felt would be appropriate for the scheme, or from tendering the architectural role directly, as Ritchie suggests. This would have allowed for a sensible creative partnership to work on the scheme, rather than an arranged marriage as is currently planned.

Knight's view assumes that having an architect on the job was not a 'given'. However, that's pretty fanciful in today's climate, where it seems clear to most clients that only architects can design decent bridges (a disappointing, but understandable notion). Indeed, the entire structure of the competition is the problem, as by holding engineer and architect at arm's length and allowing only the architects to demonstrate creativity in securing their appointment, it makes clear that the engineer is only there to make the bridge stand up, not to provide fundamental design direction.

The deadline for prequalification submissions has now passed, so the complaints raised in the AJ will fall on deaf ears. It will be interesting to see how many of the shortlisted architects have managed to persuade engineers to assist their teams, and what kind of bridge concepts are then submitted to the competition.
Posted by The Happy Pontist at 8:20 AM No comments: