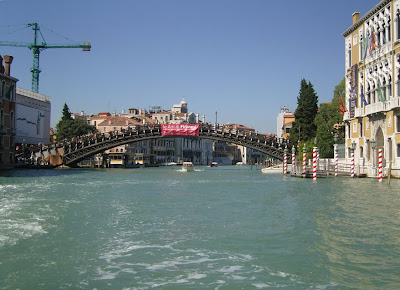 While in Venice, I visited all four of the bridges over the Grand Canal. I started at the north end, with the most modern bridge, Santiago Calatrava's Ponte della Costituzione, and worked my way south, but here I'm going to cover the four spans in reverse order, which is closer to the history of when they were built.

The Ponte dell'Accademia ("Bridge of the Academy") spans the Grand Canal fairly close to its southern end, running broadly between the Gallerie dell'Accademia and a large public square, Campo Santo Stefano.

The first bridge on this site was completed in 1854. Designed by Alfred Neville, it spanned 50m, comprising a flat iron truss girder. A paper presented at the Venice IABSE conference in September describes it as a "reticular girder" or a "Neville beam", but these aren't terms I've seen elsewhere.

The girder solution is a sensible approach in Venice from one perspective, although only about 1 in 8 Venetian bridges are beams rather than arches. Girder bridges have the advantage of only transmitting vertical reactions, which is helpful, as Venetian soils are of poor quality and prone to long-term settlement, not a great characteristic when subjected to arch thrusts. 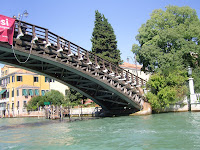 However, the beam bridge requires much higher approach ramps, especially if an appropriate navigation clearance is to be maintained. With a headroom of only 4.2m, the first Accademia bridge was a constant obstacle to navigation, and when it became increasingly dilapidated in the early 1930s, it was overdue for replacement.

The new structure was a 48m timber arch span, designed by Eugenio Miozzi, and opened in 1933. This required both concrete piles and screw-tipped wooden piles to withstand the arch loads. Miozzi's bridge lasted even less well than Neville's design, with the introduction of substantial steel arch components in 1948, and further stiffening added between 1963 and 1965. 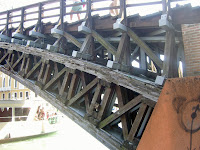 The present bridge is yet a further evolution, as the bridge was rebuilt in 1986 as a steel arch structure, clad extensively in wood to preserve the general appearance of Miozzi's design. You can see in my photographs that there is a lattice steel arch lurking with embarrassment behind the wooden facade, and this mismatch becomes even more apparent from below, where the steel flanges are clearly visible (don't forget you can click on any photo for a larger version).

As with most of the Grand Canal bridges, this is a steep bridge to cross if carrying heavy baggage, and must be particularly awkward for anyone who is mobility impaired or has a child in a pushchair. The Venetian City Council announced in 2009 plans to modify the bridge to provide disabled access, but they are unwilling to stump up any part of the estimated €5m cost. Instead, they're hoping potential designers and contractors will fund the work via some form of sponsorship. 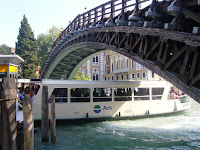 According to a report in The Art Newspaper, similar use of sponsorship elsewhere in Venice has attracted considerable yet unsurprising criticism (I'll come back to that in a later post). I suspect they have had few takers for this astoundingly cheapskate proposal, which is particularly ridiculous given the amount of money available in Venice for mega-projects such as the anti-flooding MOSE scheme.

I like the Accademia bridge - from a distance. The shape is attractive and well-proportioned, and the relatively open timberwork has a light appearance. From close at hand, however, it looks somewhat shoddy, and the conjunction of the poorly conserved timber shell with a duplicitous steelwork core is very uncomfortable.

Further information:
Posted by The Happy Pontist at 10:18 PM