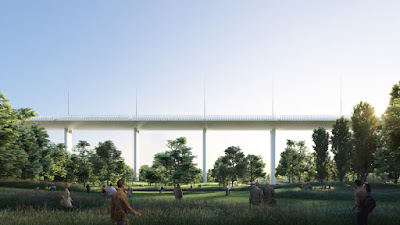 Details have been made public for the new Polcevera viaduct in Genoa, Italy, the proposed replacement for the bridge which collapsed in August this year killing 43 people.

The bridge design is credited to architect Renzo Piano, who offered his services free-of-charge in the aftermath of the August disaster. I imagine a structural engineer is involved, but I haven't found out who they are yet. 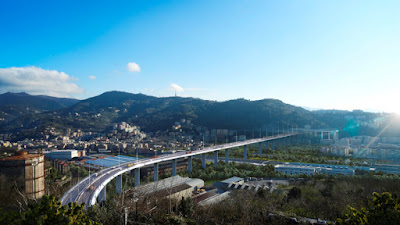 The €202 million construction contract has been awarded to Pergenova, a joint venture of Italian contractors Salini Impregilo and Fincantieri Infrastructure. They state that the new bridge will be complete in 12 months from the site becoming available, which will be when demolition of the existing structure finishes in March 2019.

The new structure is to be an elegant and, I think, consciously unspectacular steel viaduct, some 1.1km long, comprising twenty spans mostly 50m long, with some 100m long where required to span the railway and river. The reinforced concrete bridge piers are elliptical in section. 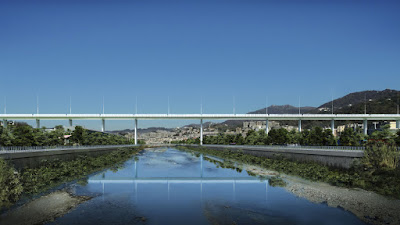 The design is sober and straightforward. The only nod towards the site's tragic history comes with the lighting columns positioned above each bridge pier. These extend in height and support a number of solar-powered lanterns, reportedly one for each victim of the bridge collapse. 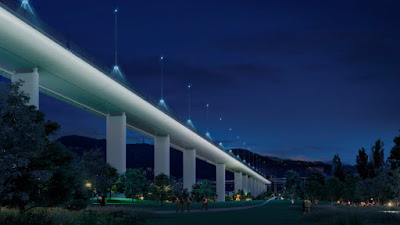 I do wonder about the width of the piers - in some of the renderings, the deck is shown as much wider than its supports, which for me looks visually unsatisfactory, potentially unbalanced if only one side of the roadway is heavily loaded.

Of course, there will be no issue if the bridge deck is heavy enough, and Genoa is not in one of the more seismically active areas of Italy, classed as having a peak ground acceleration between 0.05g and 0.15g, for a 50-year return period, and from what I can see, at the lower end of this scale even for a longer 475-year period. 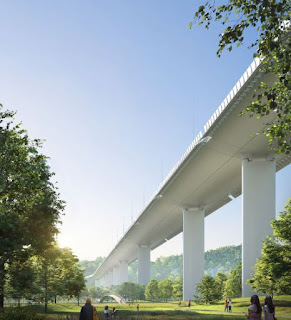 The Piano design was chosen against one other competing contractor, Cimolai, who submitted four proposals, three of them designed by Santiago Calatrava. The proposals featured a girder viaduct with a series of 125m spans; a cable-stayed viaduct with 140m spans; and a 550m-span tied arch bridge, all pictured below. You can find more detail in Cimolai's video and in a gallery on the Domus website.

It's no surprise that Cimolai were unsuccessful: which public authority would wish to run the risk of an over-budget fiasco at this particular site, as so often seems to accompany anything Calatrava designs? It's also apparent that any of these solutions would take longer to build than the Pergenova proposal.

Visually, two of the three lack a sense of lateral stability, and all of them are visually over-complicated and inappropriately dramatic. The arch design, with its awkward stiffening truss at deck level, is particularly poor.

Cimolai's non-Calatrava option (no designer appears to be credited), is worse still:

Meanwhile, some 20 people are reportedly under investigation on suspicion of involuntary manslaughter in connection with the original bridge failure.
Posted by The Happy Pontist at 3:30 PM 5 comments: