Leamouth Bridge plan still in the pipeline
Leaside Regeneration are still trying to drum up funding for an unusual opening footbridge, planning permission has been extended while they wait (see my previous post for more details on this bridge).

Ordinary house-hunters have the chance to become lord or lady of a remarkable Banffshire estate
More importantly, if you have £2.2m to spare, you could become the proud owner of Scotland's version of the Pont du Gard, the little known but thoroughly splendid Craigmin Bridge, described by one author as "a wildly picturesque, two-storeyed, wavy-parapeted practical folly".

Budget for new Bay Bridge span nears $2 billion
So, what is the most expensive bridge ever built?

How Britain Bridges the World
Documentary for the History Channel will feature Michel Virlogeux, Keith Brownlie, Norman Foster and others.

Port Authority commits $1B to Bayonne Bridge
How do you raise the clearance on a mammoth bridge like this? Options include everything from raising the road deck, to adding a lift span in the middle.

Bridge architect Miguel Rosales lands commissions for three pedestrian bridge projects in Cleveland
There are some engineers involved too, apparently. One of the bridge proposals is pictured below. 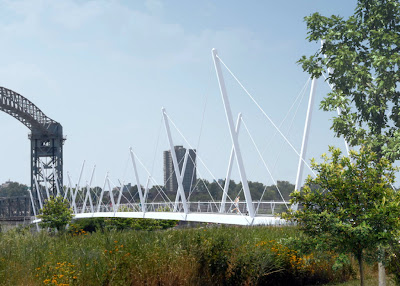 You may already know of experimental lighting of Royal Border Bridge - see
http://apps.robertstephensontrust.com/Blog/?e=54476&d=09/21/2010&s=Testing%20the%20Royal%20Border%20Bridge%20illuminations