It's been a busy year at Pontist Towers, so much so that my time available for blogging has been greatly reduced. That's unlikely to change in 2016, so you can expect posts here to remain fairly infrequent.

2015 ended with a great deal of bad news on the bridges front, with four bridges which I've visited and featured here either badly damaged or completely destroyed by flooding. 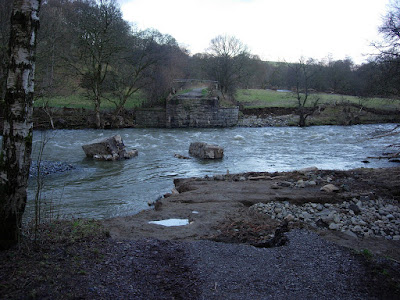 The bridges of the Cockermouth Keswich and Penrith Railway survived over 150 years before succumbing to the effects of Storm Desmond in early December. These bridges had been converted to a walking and cycling path after the railway was closed. Two of them were washed completely off their supports, the spans at White Moss (pictured above) and Brundholme (pictured below). When I visited them in 2013, they were rusty but reasonably robust relics, preserved and actively used, but it seems unlikely they will be restored any time soon. These photos are courtesy of Floodpics2015. 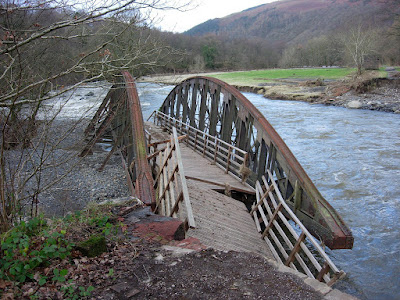 A number of other notable bridges were damaged or destroyed by the same storm. The Grade II Listed Pooley Bridge in Cumbria, dating from around 1764, was one of the most notable casualties, completely swept away by the sheer volume of floodwater (pictured, below, courtesy of Robert McEwen). 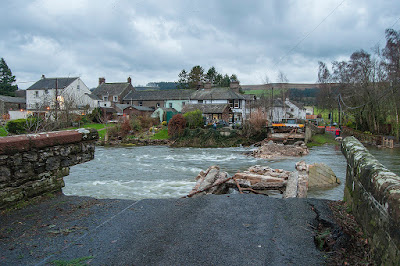 At the end of December, Storm Frank brought further devastation. It affected two bridges on the River Dee in Aberdeenshire which I visited in 2012.

The Grade B Listed Cambus O' May Bridge is a lovely suspension bridge built in 1905, and largely reconstructed in 1988. It has been badly damaged by floodwaters and may be beyond repair. Looking at footage of the flood, it's amazing it survived at all. To get an idea quite how much flood water passed down the Dee, compare the flood footage with the more normal level of the water in my blog post.

Another suspension footbridge on the same stretch of the River Dee has been less lucky. The Abergeldie Castle Footbridge, built in 1885 and also Listed Grade B, has been destroyed, except for its northernmost tower. This was already a derelict bridge, recognised on the Buildings at Risk register. It had been disused for a long time, and clearly will never be replaced. Footage in a Daily Mail report shows the wreckage, although quite understandably gives more prominence to the threat to Abergeldie Castle itself. 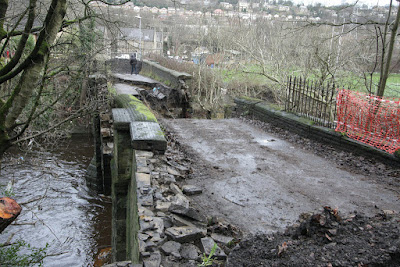 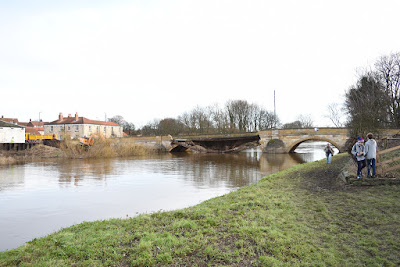 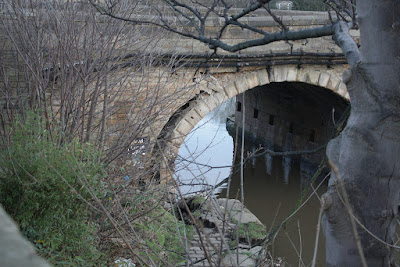 It has been reported that December 2015 has seen the greatest rainfall of any month in the UK since proper records began. With that in mind, it is difficult to blame these many bridge collapses on inadequate flood defences, or lack of maintenance. It seems initially more likely that they have experienced hydraulic loads and scouring action well beyond anything they had previously survived.

However, it seems clear that the recent rainfall and flooding are unlikely to be a one-off event, but that similar events could be experienced again far sooner than would normally have been expected. Historically, severe flooding has always been one of the greatest causes of the loss of bridges, and it's unreasonable to expect to be immune in the present day. It may be that no reasonable amount of flood defence or flood mitigation measures could have prevented these disasters.

I hope that at least some of the bridges affected by recent events may be restored rather than simply replaced, and that it spurs a wider effort to enhance the resilience of bridges throughout the UK. The examples here show they are important for heritage reasons and also as key transport links. Let's hope that the reins of economic austerity are loosened sufficiently to make a difference before the next time such severe flooding occurs.
Posted by The Happy Pontist at 10:46 PM 5 comments: