London’s Olympic Park is home to a number of interesting bridges. Several were not easily accessible to the general public when the Olympics were in progress, but hopefully will become so once the Park’s redevelopment is complete.

I’ve previously covered one which was very accessible, the Stratford Town Centre link bridge. I’ve also discussed the results of the design competition which was held for the Park’s centrepiece bridge, a super-wide structure which had to accommodate massive crowds during the games. It was a difficult challenge, as the same bridge had to be easily modified to suit the smaller number of users of the park after the games had ended. The contest attracted several high-profile designers, and the visualisations of the winning design (like the one shown here on the right) made it look like an excellent choice. 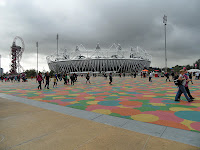 I visited this bridge during the Paralympics in 2012, and found it hugely disappointing. From above, you would barely know that a bridge existed at all, it is so wide (55m), something that readily illustrates how misleading the birds-eye views used in visualisations can be (see image, left). That’s not necessarily a bad thing in its own right, but it made me wonder how necessary the design competition really was. 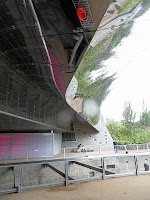 From below, the bridge was a mess. In its post-games configuration, a large area of central temporary decking will be removed, leaving two separate 26m long walkways. Each of these will be a sleek form in stainless steel, slightly amorphous in a Terminator 2 style. In practice, the stainless steel cladding is not quite as regular as it needs to be to deliver this vision, nor as clean. It looks like what it is – a conventional bridge wrapped in cladding, and it’s a let-down. 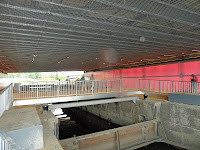 The temporary decking provided welcome shelter from the rain to several visitors while I was there, but is ugly and oppressive. It’s a shame that a little more money wasn’t found to cover over the underside. 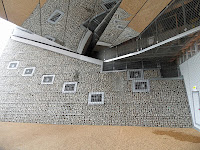 In combination with the evident cheapness of the gabion-basket walls at either end of the bridge, the overall impression is dismal. The design competition delivered a bridge which fulfils its carrying function well, but is visually unprepossessing. It will be interesting to see, if and when the temporary infill deck is ever removed, whether the twin-walkway arrangement is more successful. 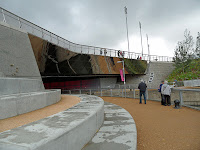 There seems some doubt as to when the temporary deck will actually be removed. The original intention was for it to be taken out this year, as part of the general Olympic Park transformation following completion of the games. However, a report in the Architects Journal suggests it will stay in place at least until the World Athletics Championships in 2017.