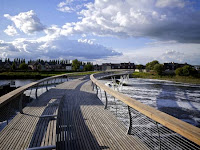 Channel 4 has tonight screened an interesting documentary ("Kevin McCloud and the Big Town Plan") about the Castleford Footbridge designed by McDowell + Benedetti, Alan Baxter Associates and Tony Gee & Partners. It's not yet up on their catchup website, but should be there to watch online tomorrow.
The 130m long footbridge has been shortlisted for awards including the World Architectural Festival Award, and is certainly a very impressive structure, taking advantage of a very attractive location just downstream of a weir on the flood-prone River Aire. 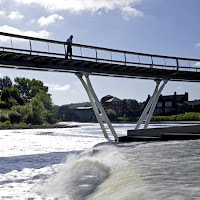 Hosted by Kevin McCloud, the documentary followed the bridge's progress from an invitation-only competition five years ago to its eventual opening this year. McCloud sees himself as promoting excellence in design to Joe Public, particularly excellence in architectural design. Engineering is often left by the wayside - lead architect Renato Benedetti is portrayed pretty much as the sole designer (he's the only person on the programme to acknowledge there were others), but much of this is because he offers one of the few fixed points in the bridges development - the initial structural engineer Alan Baxter Associates gave way to Tony Gee & Partners once the scheme was let as a design and build contract, not that you'd know any of that from the show.
Competing designer Mark Whitby is described alternately as an engineer and as an architect, while engineers (in the form of Rowecord, the steel fabricator) are much praised as the "craftsmen" or makers, but only the architect is seen as a designer. This might well be the case in this project (you can't tell from the programme), but it's an unwelcome hang-over from McCloud's day job televising domestic building design, where the structural engineer is rarely as key a participant as for an unusual bridge design. For example, Benedetti discusses the way in which seating on the bridge is used to disguise shallow fin-back box girders. These protrude above the deck, neatly reducing its apparent depth, but were they the architect's idea or the engineer's? 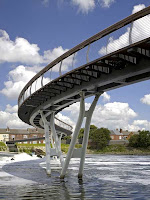 There's plenty more amusement on hand: the final design as built looks very much like that of rejected competitor Whitby, and nothing like the floating bridge that won Benedetti the job. I nearly coughed up my drink when he first suggested to the community judges that he could provide a bridge for £130,000 (the final cost is variously reported as £3.2m on the show and £4.8m on the Channel 4 website - that's a reasonable £6,100 per square metre of deck if you go with the lower of the two figures). A floating bridge would have been ridiculous at a flood-prone site where river levels can rise by 3m and river-borne debris includes boats and cars; however it took at least £50k of money wasted on a hydraulic study and the raised eyes of a sighing chap from the Environment Agency before this daft idea was ditched. Of course, it was the bargain-basement floating bridge and Benedetti's charm that had won over the "community champions" in the first place, and the local enthusiasts weren't deterred in their support however much the design changed course.
Yet again (assuming the programme to be "true" and ignoring how much it may have been edited to exaggerate the drama) the design competition format showed itself to be in many ways inferior to traditional optioneering, feasibility study, proper surveys etc. Most of the problems that the documentary suggested arose as the design stumbled onwards (land purchase costs, vulnerability to flood-borne impact, flood inundation during construction) were predictable from the start. Having said that, there's no doubt that it's an excellent design which well deserves the attention. And the film-makers have done a great job both of illustrating the difficulties such a project can experience, and the valuable contribution that high-quality design can make to a community. 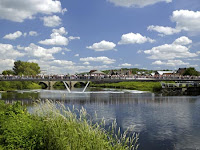 One of the programme's key questions was whether the money spent will achieve its aims of triggering regeneration of a very run-down town. Surely it's long past time this question was studied properly - what's the change in economic activity in towns that build landmark bridges versus those that don't, and is there any real evidence that the benefits outweigh the costs? I'm not suggesting that simple economics should decide whether it's worth improving our aesthetic environment (on the contrary), just that it's a question where a proper answer might prove enlightening.
Lot's more very useful information on the design can be found at the Dezeen blog.
Posted by The Happy Pontist at 11:20 PM

I echo your comments about the invisibility of the engineers; and as you say, the programme spent a lot of time 'resolving' issues that should have been recognised at the beginning of the process. It remains to be seen whether the money was well spent or not from the point of view of regeneration. But the bridge does seem to fulfill a real need for the residents of the island - the existing crossing being very uninviting to pedestrians - and opens up the river in a really spectacular way.

The show is up now online at http://www.channel4.com/video/kevin-mccloud-and-the-big-town-plan/catchup.html

i was also amazed to see the bridge looked very similar to the original WBP design which was part of the city masterplan.

I must also add that the timber deck with grooves running in line with deck is asking for trouble. We have tried timber with non slip inserts in many locations and it always causes problems. Let the 'claims' begin.