The third and most recent high-level bridge to cross the Ouseburn Valley is the Byker Metro Viaduct, completed in 1982 for the Tyne and Wear Metro. 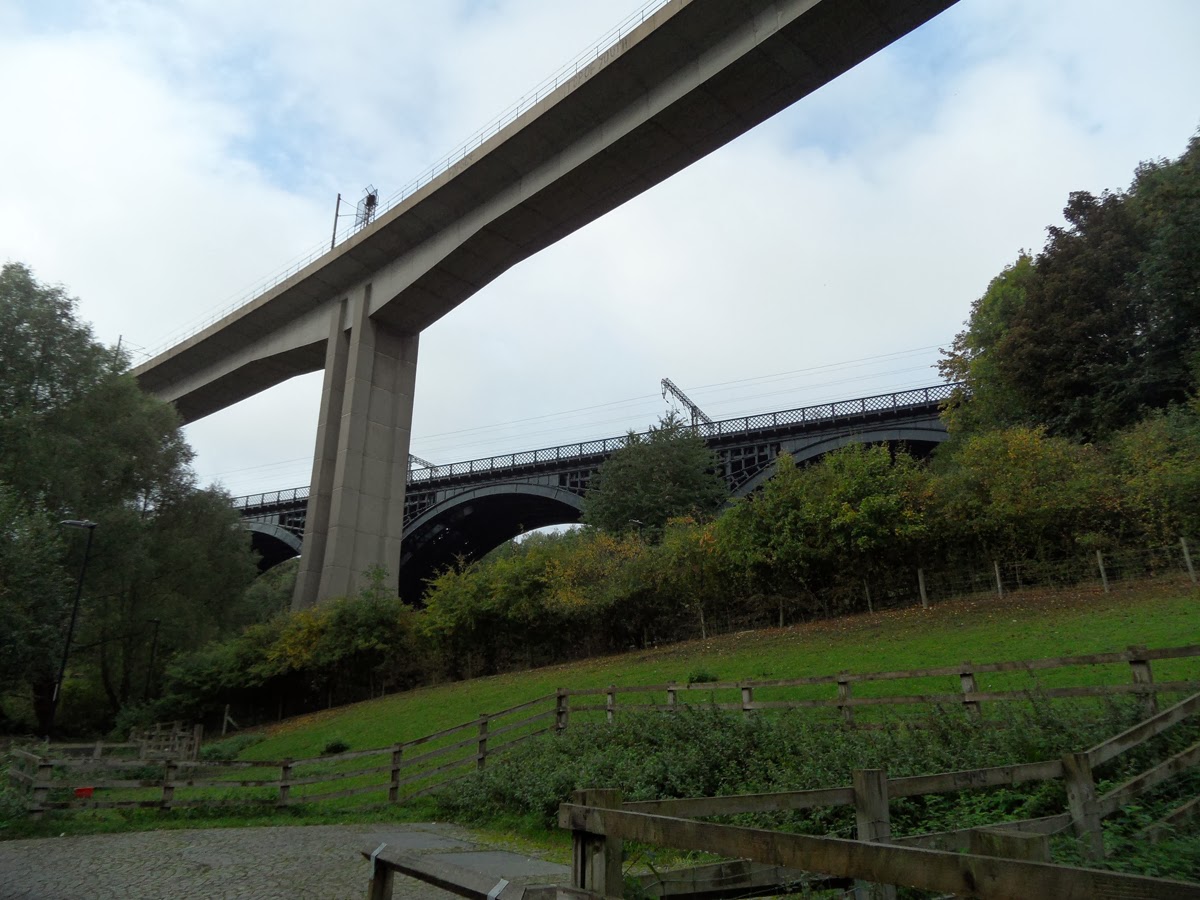 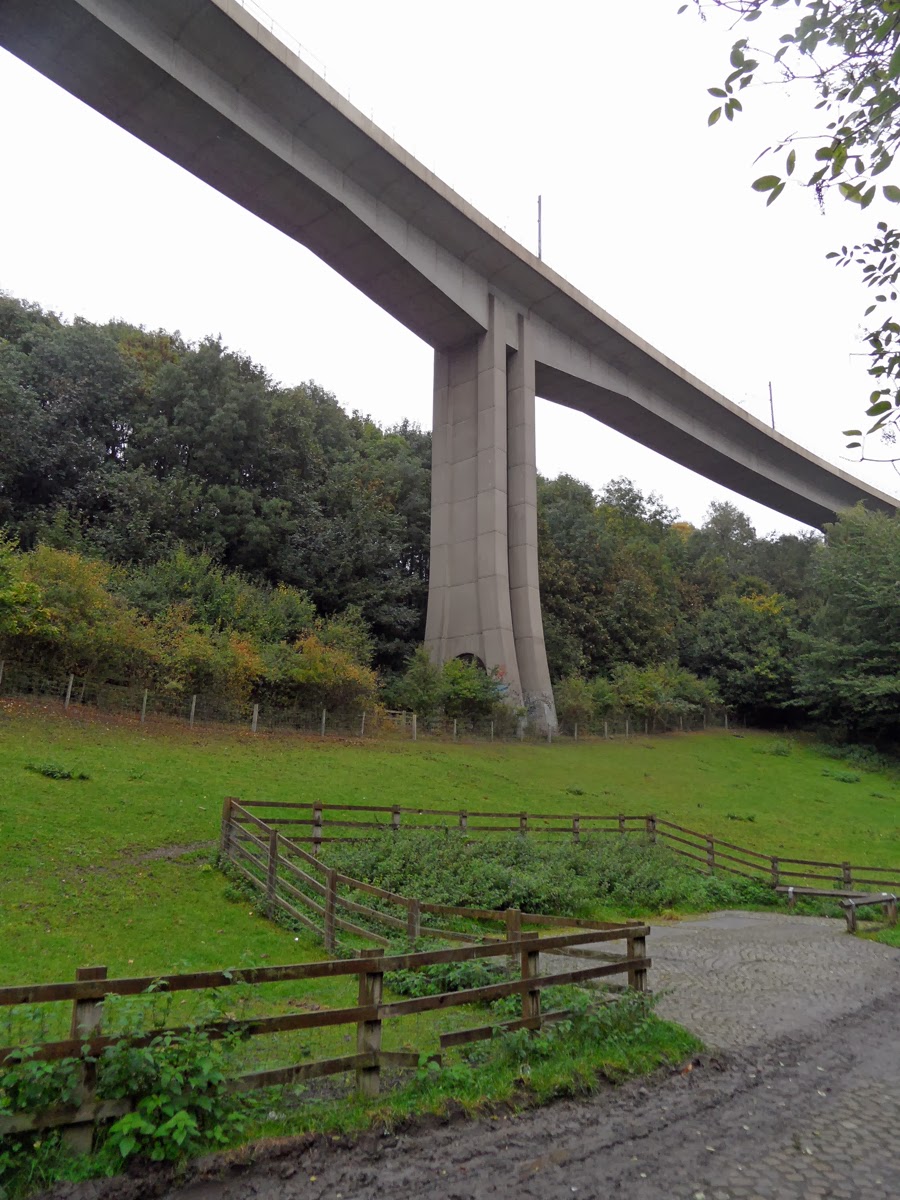 I only had time to visit its western end, which spans the valley. Much of the viaduct, at its eastern end, runs at about 6-7m above ground level, and is visually less imposing.

The bridge was the first glued segmental precast prestressed bridge to be built in Britain. The main spans are 69m long, with haunched concrete box girders supported on twin-stem piers. The bridge's appearance was considered significant enough for the design to be presented to the Royal Fine Art Commission in 1975. 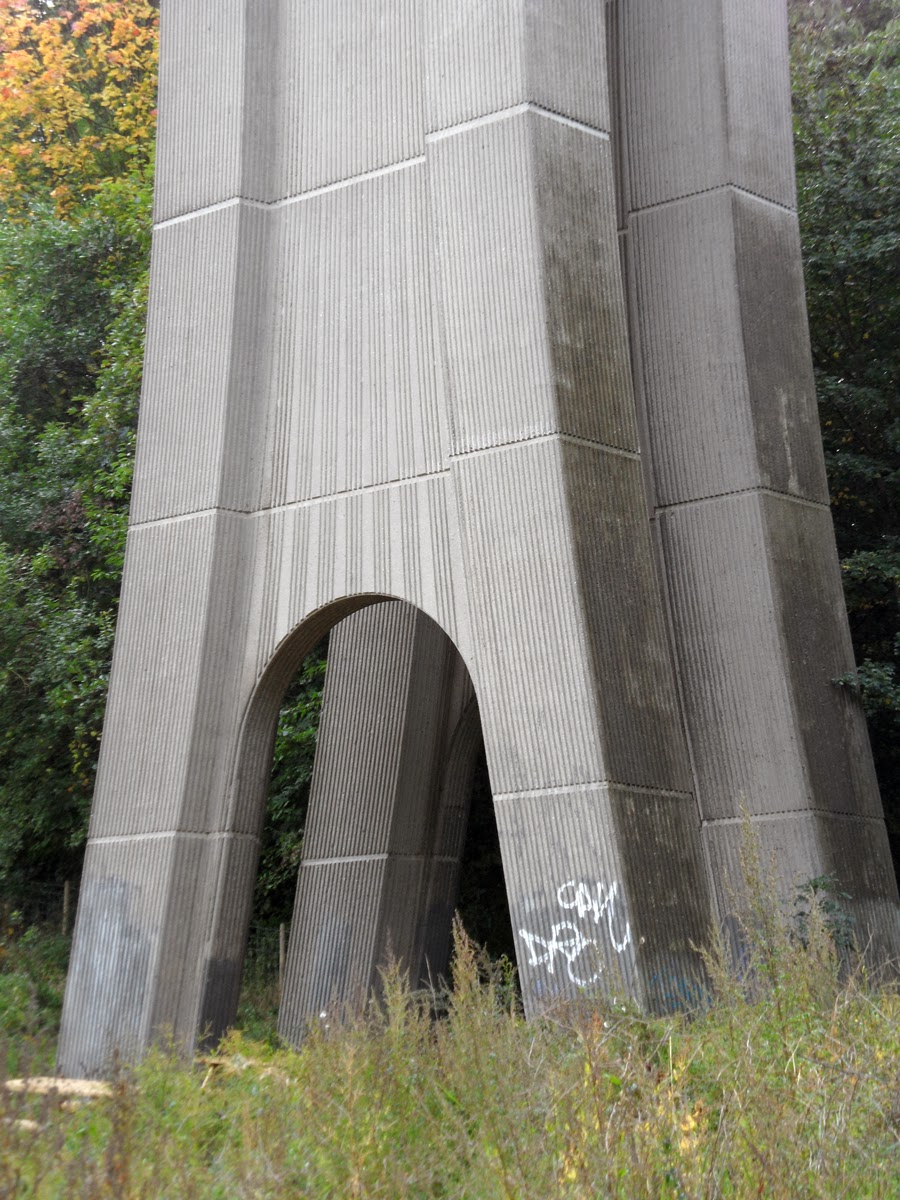 The form of construction lends itself to a site where there was highly restricted access for plant. The concrete segments were precast off site, and winched down the valley slopes on temporary tracks. The length of each segment was just narrow enough to allow it to pass through an opening in the bridge piers, allowing the segments to be manoeuvred along a very narrow construction strip. They were then lifted and erected using the balanced cantilever method. Each segment was bonded using epoxy glue, and stressed in place with short length bars. Further prestressing was added in later stages. 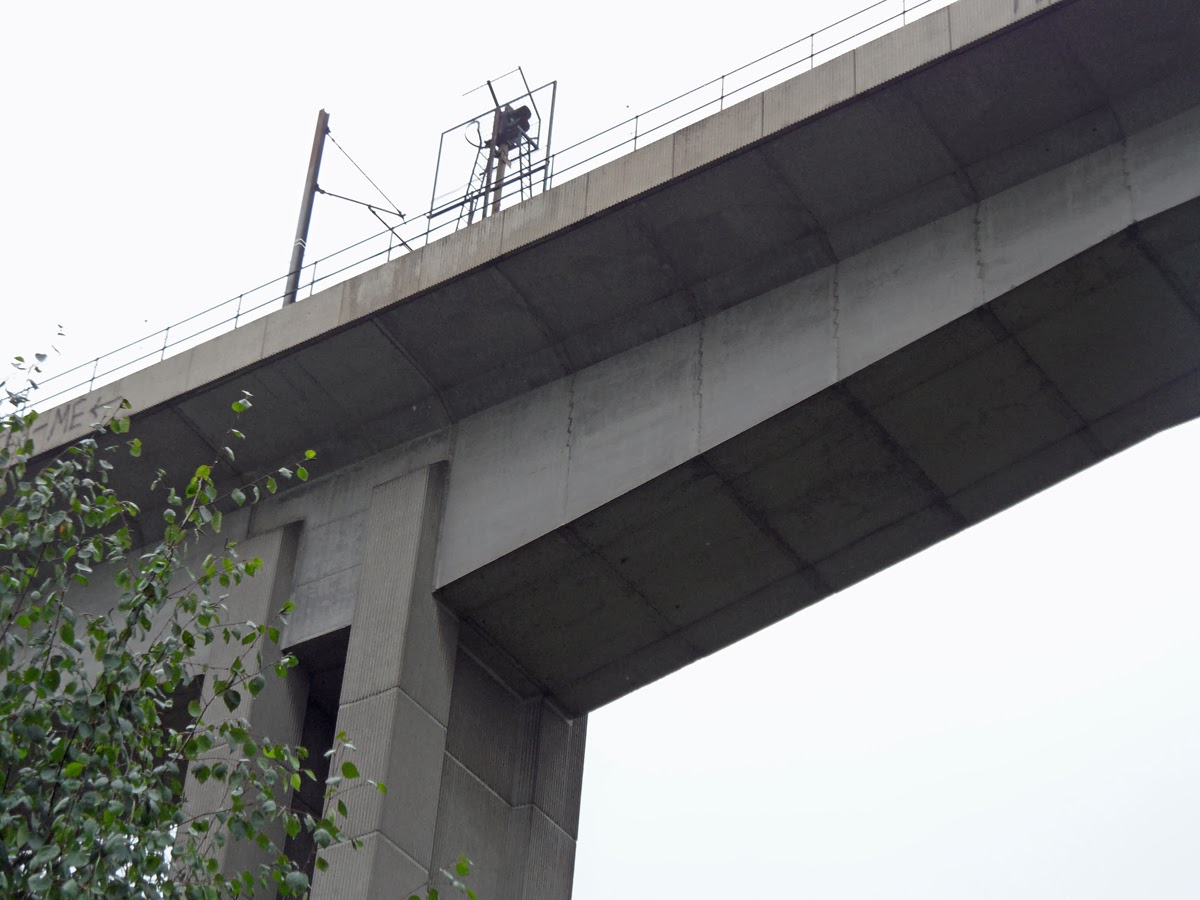 The segments were "match-cast" i.e. each one was cast against its preceding segment, to ensure a perfect fit. Sawteeth keys in the webs, still visible in the completed structure, help align the units during erection. In practice, this method requires very careful measurement and control, as errors have the potential to accumulate over multiple segments. This is exactly what happened with the Byker Metro Viaduct, with a significant twist detected as more segments were added. Special segments had to be cast to correct the twist. 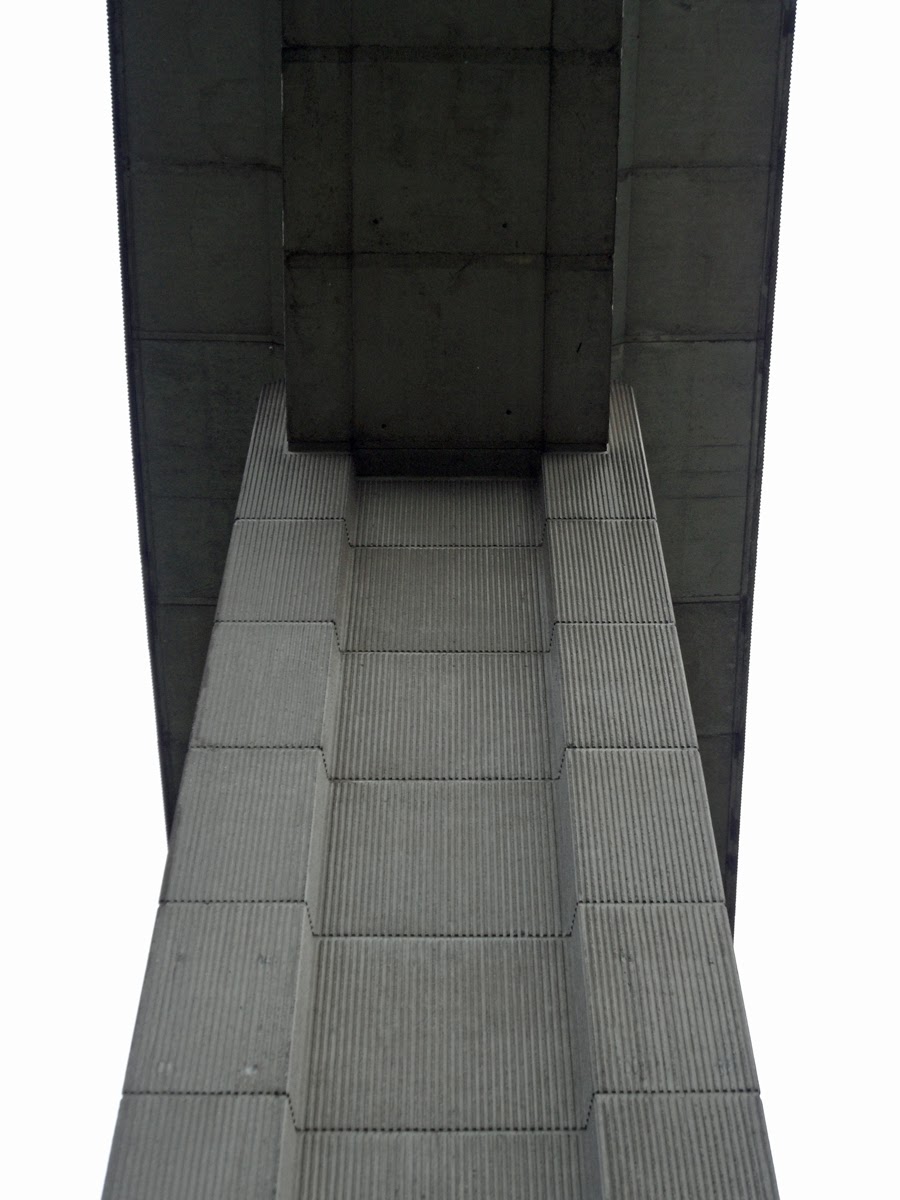 The finished bridge is aesthetically striking, and I think very successful. The plain finishes to the concrete deck contrast with a vertically ribbed finish on the piers and precast parapets. The ribs are nicely detailed, splaying out as the piers widen out towards their base. Horizontal feature grooves have been included on the piers to disguise construction joints.

The splayed piers both give an impression of considerable stability (required to resist centrifugal loads from the metro vehicles), but also make what are quite substantial concrete sections look quite elegant.

I think this is easily one of the most impressive and well thought out bridges on this scale to have been built in Britain.

Posted by The Happy Pontist at 10:41 PM No comments: 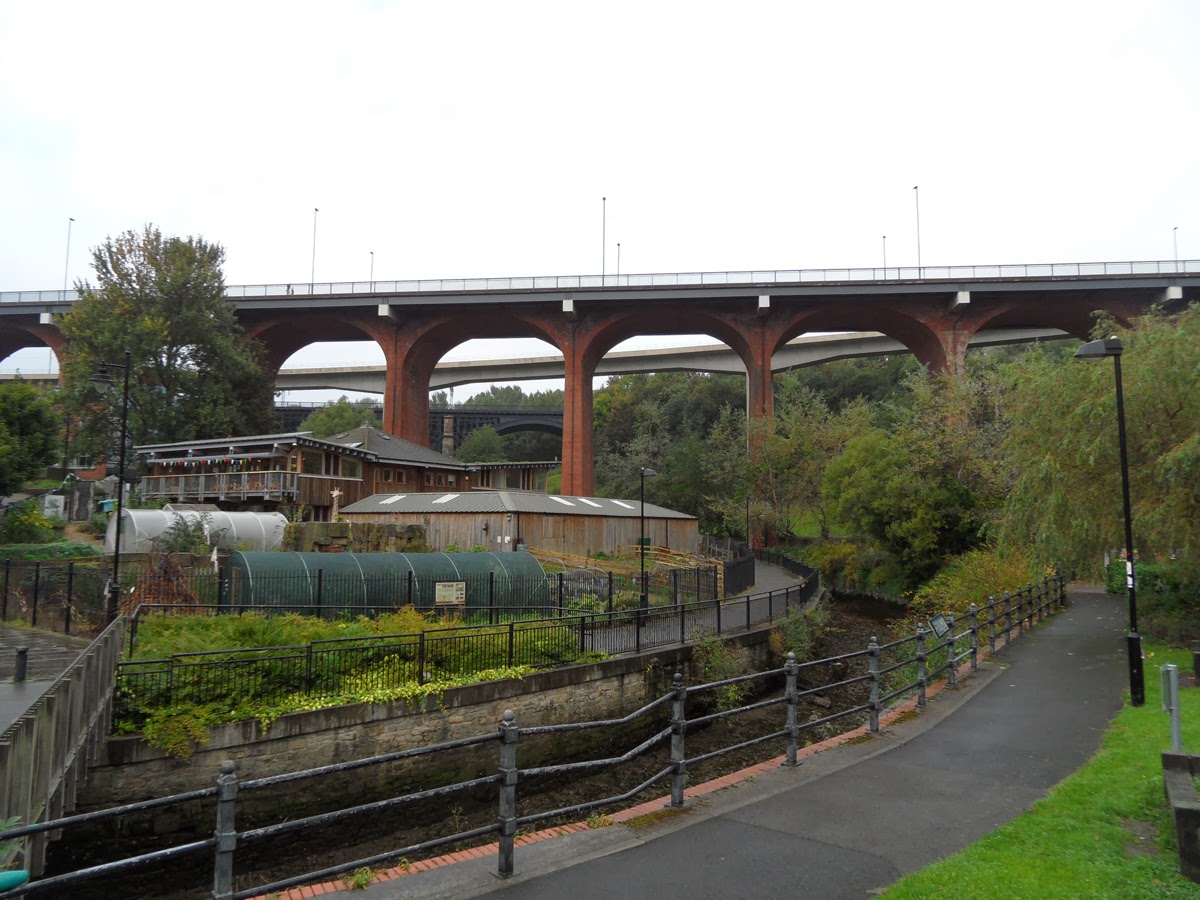 The second bridge to be built linking the crests of the Ouseburn Valley was the Byker Bridge, built in 1878 to a design by Robert Hodgson. Hodgson had been Robert Stephenson's Resident Engineer for the construction of the Newcastle High Level Bridge, and the original Byker Bridge very much resembled a railway structure, with its tall brick arches. 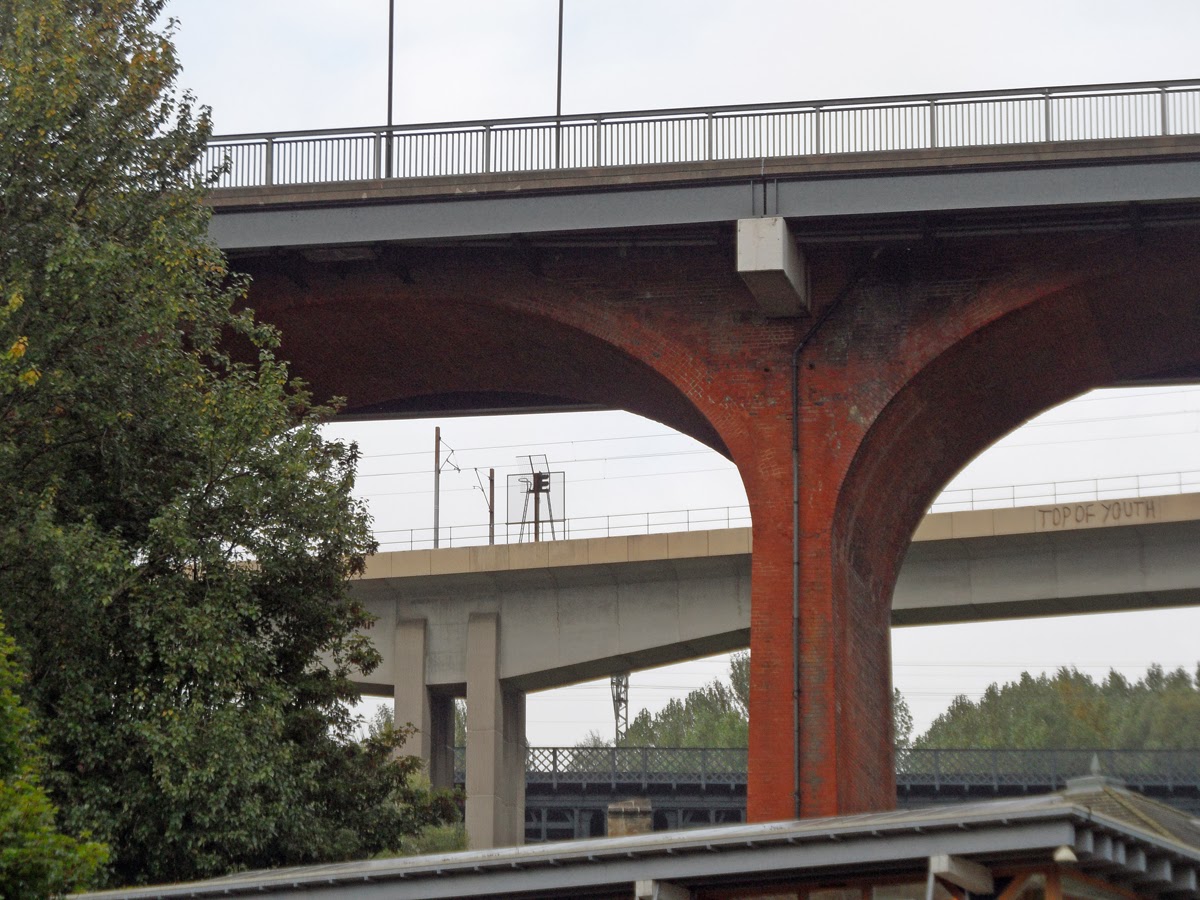 When first built, users of the bridge had to pay a half-penny toll, although this was withdrawn in 1895.

According to the ICE's Civil Engineering Heritage book, the bridge was widened in 1902, to cantilever the footpaths beyond the edge of the brickwork; and then the widening was "improved" in 1985, adding prestressed concrete beams on cantilevers to support both footways and new crash barriers. 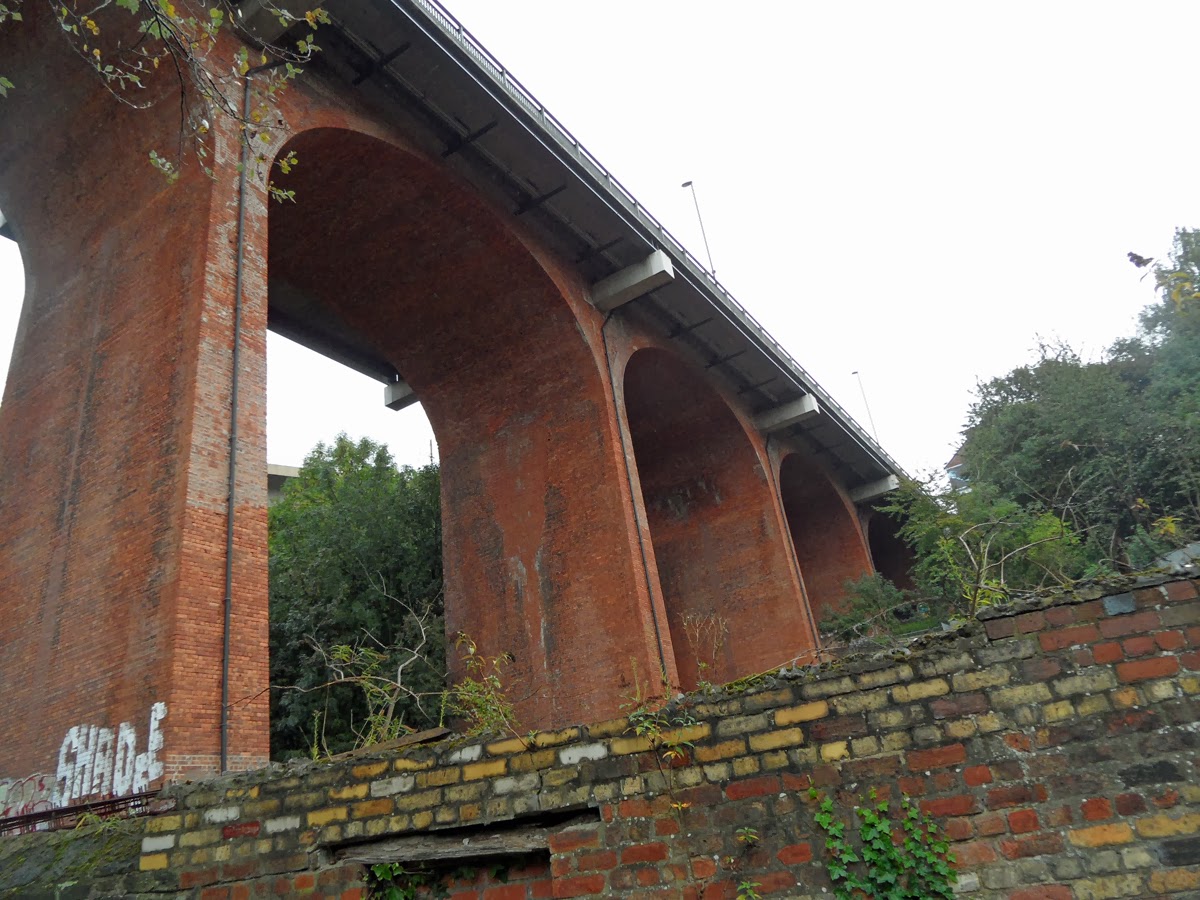 Clearly, "improved" is used only in a technical sense, as the widening has utterly spoiled the appearance of the bridge. The original bridge appears not to have been a great beauty - its tall piers taper slightly, which seems attractive, but the semi-elliptical arches look awkward.

Now, the stubby little concrete cantilevers look quite horrible, and the effect of the deck widening is to hide the crowns of the arches, "squashing" them unpleasantly.

I'm continuing my series of posts on the bridges of north-east England which I visited as part of an IABSE study tour last year. The second day of the tour had begun with a visit to the delightful Cragside Iron Bridge. From there we went to Newcastle-upon-Tyne. 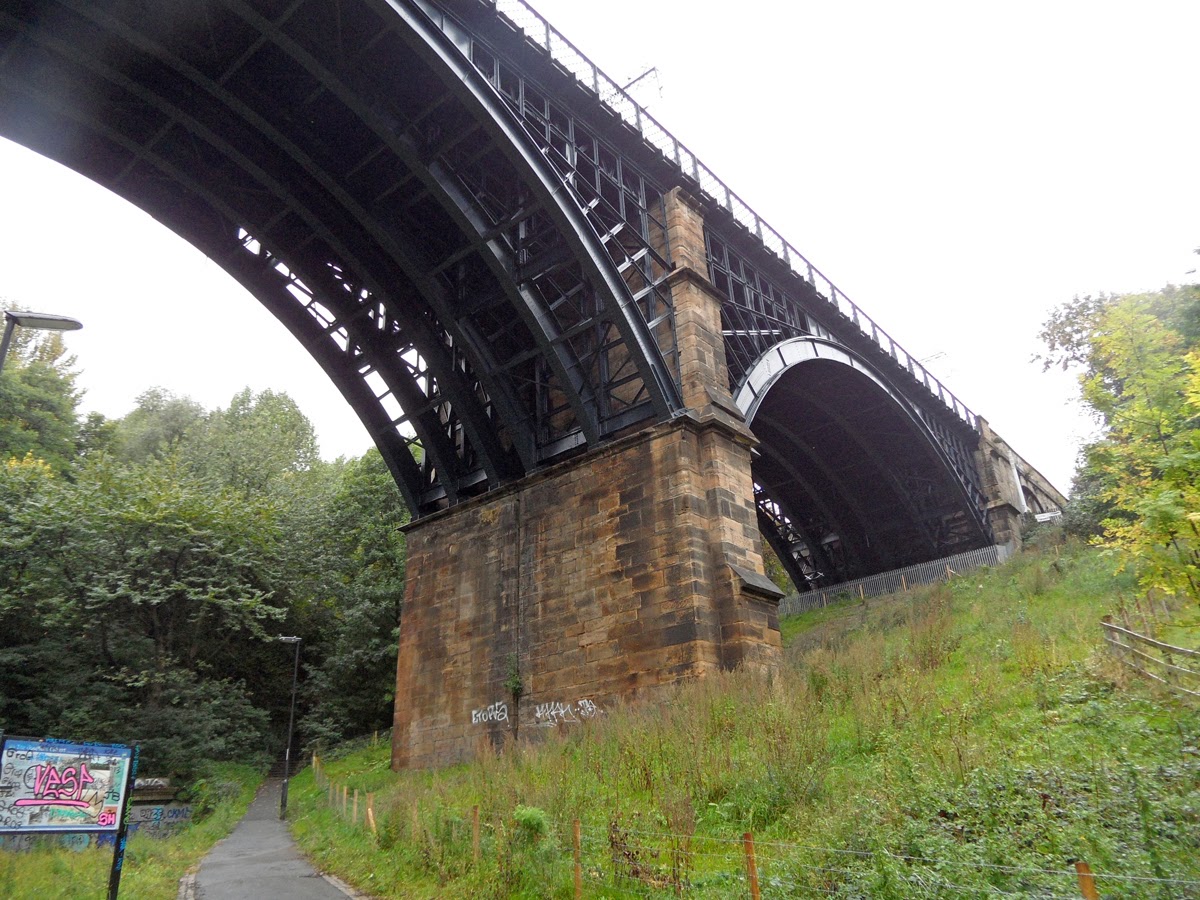 Three tall bridges span the Ouseburn Valley in Newcastle-upon-Tyne. The Ouseburn Viaduct was the first of the trio to be built, in 1839, to a design by John and Benjamin Green. To place it in context, it was built ten years before Stephenson's High Level Bridge in the same city, and was completed in the same year as Brunel's Maidenhead Bridge for the Great Western Railway. At this time, anything other than a brick or masonry bridge remained relatively unusual on the railway. 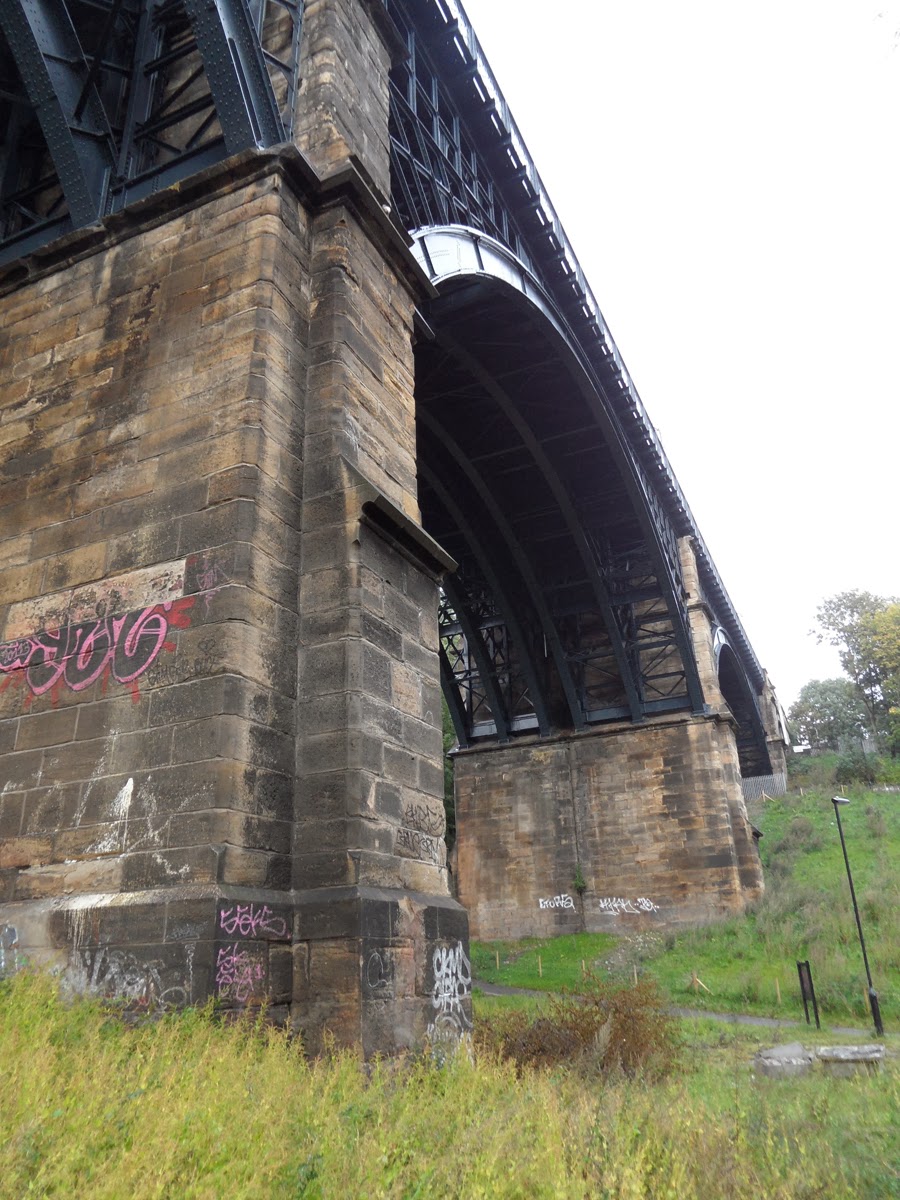 Brunel's famous timber railway viaducts in Cornwall would not be completed for another two decades, but timber structures were springing up in various other places. In the same year as the Ouseburn Viaduct, the timber Scotswood Bridge was completed in Newcastle. Within the next decade, timber arch viaducts would be completed at Etherow and Dinting Vale, both near Manchester.

The Ouseburn Viaduct, along with the Willington Viaduct built at the same time on the same railway line, was originally a timber arch structure, built using the Wiebeking system. This involved the use of laminated timber sections, made from Baltic softwood, and preserved by Kyanising. 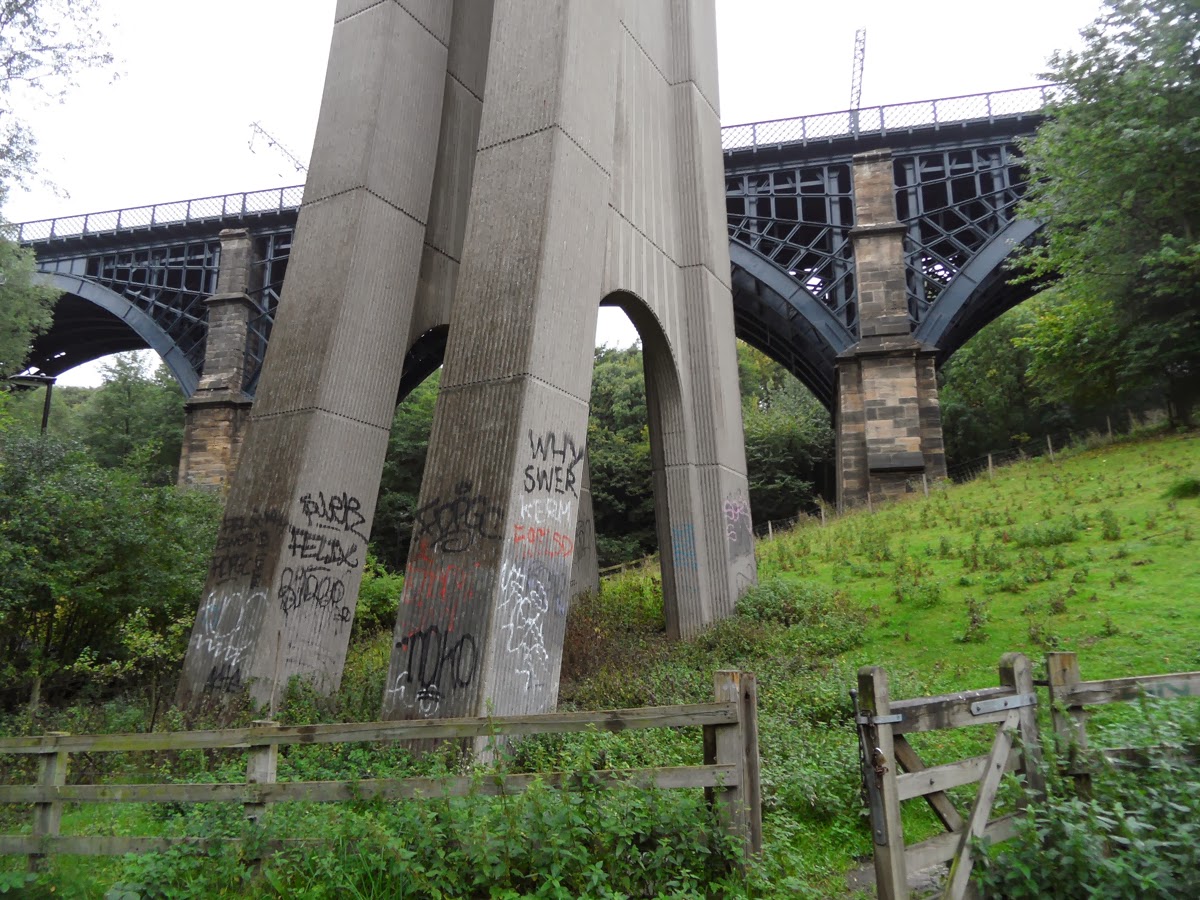 The timber bridge lasted for three decades, and was replaced in 1869 by the wrought iron bridge which remains there today. The pattern of the ironwork closely followed the geometry of the original timber structure.

In 1885, the bridge was widened, doubling the number of arch ribs, to carry additional railway tracks. Since then much of the valley floor has been infilled, hiding the original stone piers, which appear to have been much taller in old images and drawings of the bridge.

This wasn't an easy bridge to photograph, half hidden by trees and by adjacent structures.

There's a lovely quote in Benjamin Green's ICE paper concerning this bridge, from another consulting engineer:

"It appeared to me that to cross the Ouse Burn and Willington valleys, would be a work of so much labour and cost, that I would not conscientiously recommend the Committee to prosecute their plan. These difficulties, however, are likely to be removed, and most effectually surmounted by the great scientific and practical knowledge of Mr Green, who proposes to pass over them by bridges of peculiar construction, and at a comparatively light expense. To him I would most willingly transfer that responsibility, having no pretensions to skill in bridge building myself."

Posted by The Happy Pontist at 9:56 PM No comments: