But now it's your chance to tell me: what did I miss out? What is your own "essential" bridges book? Answers in the comments, please!
Posted by The Happy Pontist at 9:10 PM 16 comments: 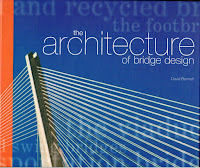 I struggled over my choice of the tenth and final book in this series, and am not entirely sure that David Bennett's The Architecture of Bridge Design (1997, Thomas Telford Publishing, 200pp) [amazon.co.uk

] can rightly be described as "essential". However, it's a book that had quite a significant impact on me as a designer, and so I'm including it here.

The book was intended as a "state-of-the-art" survey of bridge design by both engineers and architects at a time when there had been a prolonged period of intensifying activity between both types of designer working more closely together, on projects which were of considerable public interest and often of high design merit. The author brought together a wide variety of designers to describe their projects in their own words, and the reason I still enjoy the book today is the manner in which it captured a certain zeitgeist. 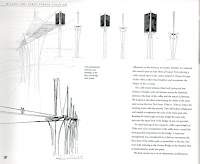 Bennett dates the period of interest to the beginning of the 1990s, with Santiago Calatrava's (unbuilt) East London River Crossing proposal from 1990, and Cezary Bednarski's Bloomers Hole Bridge, an unbuilt competition winner from 1992. It's a period that was probably at its peak when a fever for millennial footbridges took over, and I think it's a period from which designers and their clients are still suffering from a bit of a hangover. 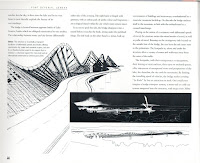 Re-reading Bennett's book now is an exercise in nostalgia. It's quite remarkable how bad some of the designs featured are, coming from an era when pretty much any ropey old visualisation could make a bridge look contemporary. Cases in point include Rodolphe Luscher's awful Pont Devenir and Budapest proposals, both included here and showing quite a staggering lack of respect for context or scale. Other poor designs include the Japan Bridge, and the East Bridge at l'Parc de la Villette, both in Paris. It's interesting to contemplate quite how these bridges were considered worthy of inclusion, but I think that then, as now, there was too little genuine criticism of such ventures. 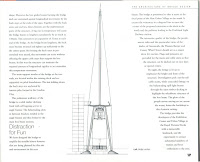 There are other designs where reading the designer's own ideas and justifications is a little depressing. Examples here include the Royal Victoria Dock footbridge, which seems even more of a white elephant when the author makes clear its reliance on the transporter gondola element, which was never installed.

In other instances, it's interesting to read numerous "what-might-have-beens", for example not only Foster and Partners' early ideas for the Millau Viaduct, but also those of Alain Spielmann, an opposing competitor. Similarly, you can contrast the Royal Victoria Dock footbridge as built with the design by Cezary Bednarski which was not. There's a degree of poignancy here, and throughout the volume, huge quantities of passion and creativity devoted to structures which would never get built. As an industry, this represents many lifetimes of talent and hard work which appear to be wasted. However, with their preservation in this book, perhaps there are still ideas which can form seeds for further development. 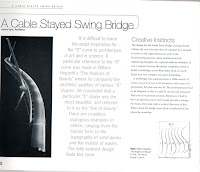 In a few of the better contributions, the designers offer genuine illumination on how their structure was conceived. A bridge like the South Quay Footbridge can't properly be understood without this background, I think.

I'd like to see more books like this about bridges: argumentative, speculative, informed and informative. It would be interesting to look back on such a book again, in ten or twenty years time, and see how the bridge-design zeitgeist has evolved.
Posted by The Happy Pontist at 8:53 PM No comments: