"In the Wake of Tacoma" by R Scott

I've often been disappointed by what is available for students of bridge engineering history. Most of the books on the shelves relate to engineers long-dead, the Brunels, Telfords, Roeblings and the like. While there are a number of books on Robert Maillart, the closer you get to the present day, the less there is to read. Compare the field of architecture, which is well served with histories and monographs, including designers active today.

One book which helps to fill this void is In the Wake of Tacoma: Suspension Bridges and the Quest for Aerodynamic Stability, by Richard Scott (392pp, ASCE Press, 2001) [amazon.co.uk

]. This is a book which takes the collapse of the Tacoma Narrows Bridge as the departure point for a wide-ranging, very thorough history of twentieth-century suspension bridge design. Its particular focus is the way in which engineers responded to Tacoma in ensuring their subsequent suspension bridge designs would not be susceptible to aerodynamic excitation.

The author is neither an aerodynamicist nor an engineer (he's an environmental planner). The result is a book which extensively discusses bridge aerodynamics without ever explaining it entirely satisfactorily. There are no equations, no graphs, and only a single air-flow diagram. This is therefore a book which talks around its central theme, somewhat like a book on evolution which mentions but never really explains the process of natural selection.

However, In the Wake of Tacoma more than makes up for these omissions with a wealth of detail.

It opens with the early history of suspension bridges, the work of James Finley, Samuel Brown, Guillaume Henri Dufour, Joseph Chaley, the Seguin brothers, Charles Ellet, the Roeblings and others. In the 19th century, a number of early suspension bridges failed under wind loading, before the provision of greater deck stiffness became a common solution.

The early suspension bridges of the twentieth century are covered in more detail, along with the design theories of the period. Josef Melan's Deflection Theory led not only to far more economic designs but also to a return to more and more slender bridge decks, at the same time as longer and longer spans were attempted, such as Othmar Ammann's 1100m span George Washington Bridge, and the 1280m span Golden Gate Bridge. Further advances in theory, such as Leon Moisseiff's 1933 Theory of Elastic Distribution encouraged the acceptance of plate girders rather than trusses for suspension bridge construction. Examples included David Steinman's Deer Isle Bridge and Thousand Islands Bridges, both of which experienced wind-induced oscillation soon after completion, resolved with a number of measures including the addition of stiffening stays. 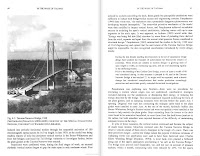 These and other bridges pushed the drive for slenderness beyond previous limits, but in 1940 Moisseiff's Tacoma Narrows design went further still, with a span-to-depth ratio of 350:1, and a span-to-width ratio of 72:1. Some concerns were raised regarding regarding these unprecedented proportions, but Moisseiff's status as an authority in bridge design ensured that the project went ahead. Deck undulations became rapidly apparent, and despite installation of restraining cables, the bridge collapsed following severe torsional and vertical oscillations on 7th November 1940.

Scott gives a satisfyingly detailed account of Tacoma's birth, death, and the subsequent autopsy, a report completed by Ammann, bridge engineer Glenn Woodruff, and aerodynamics specialist Theodore von Kármán. The latter linked the bridge collapse to the phenomenon of vortex shedding, but found the bridge engineers to be resistant to this conclusion, later writing: "Bridge engineers, excellent though they were, couldn't see how a science applied to a small unstable thing like an aeroplane wing could also be applied to a huge, solid, nonflying structure like a bridge". Nonetheless, the Tacoma failure was to be a watershed: the lesson that had been painfully learned in the 19th century, that wind could dynamically excite a bridge in a disproportionate manner, had to be re-learned, and the field of bridge aerodynamics developed rapidly.

In time, this would lead to revolutionary new technologies for the suspension bridge, as well as the ability to tackle far longer spans than would previously have been economic. First, however, there was a period of retrenchment, both in America and elsewhere, with deep stiffening trusses adopted as the simplest way to avoid aerodynamic instability. Scott covers this period in a level of detail that begins to get tiresome later in the book: every major suspension bridge design is discussed over several pages, with mind-numbing facts about rejected design options, costs and funding, weight of foundations, records broken etc. This makes the bridge frequently a chore to read, but very useful as a reference. You certainly won't find this level of information on Wikipedia, for example.

The detail also leads to some of the book's strongest features. A number of major arguments between engineers such as Ammann, Steinman, and Germany's Fritz Leonhardt are covered, dispelling the casual reader's notion that engineering is in any way a dispassionate science. For me, this is the best thing about the book: many twentieth century engineers are little-known, and the debates and controversies that have passed between them even less so.

Discussing the revolutionary Severn Suspension Bridge, opened in 1966, which introduced the aerodynamically stable box girder to the field, Scott covers personalities like Gilbert Roberts and William Brown, hugely significant pioneers who will undoubtedly be key figures in bridge engineering histories yet to be written. Brown, in particular, went on to be involved in several other significant suspension bridges. The Severn bridge's span-to-depth ratio of 324:1 was remarkable, with the trapezoidal shape of the deck eliminating the vortex shedding problem which had affected Tacoma Narrows and other bridges.

Scott offers copious detail on the post-Severn generation of bridges, both box girders and other forms. Although the book, unsurprisingly, is dominated by American bridges, it reserves plenty of space for European, Scandinavian, and Japanese developments. Less attention is given to modern Chinese suspension bridges, although it's now the Chinese who are leading in creating long-span bridge history: 4 of the 10 longest suspension spans in the world are in China, and this figure is likely to increase.

The book continues with a look at bridges which at the time of writing were under development, not all of which have gone on to be built, including the 3300m-span Messina Strait Crossing. As with several other record-breaking spans, the Messina design features split box girders, reducing aerodynamic susceptibility. A number of other advances are under discussion, including the use of passive damping and computer-controlled active damping, which may offer the further economy needed to make ultra-long spans more viable.

In the Wake of Tacoma concludes by discussing both advances in the understanding of bridge aerodynamics, and specifically the understanding of the Tacoma Narrows collapse. It isn't clear whether the bridge's traumatic behaviour has ever been fully explained, with engineers now tending towards the view that vortex generation from the leading-edge rather than trailing-edge girder is most likely to have caused large torsional undulations.

While this book is an extremely valuable contribution to the history of bridge engineering, verbosity and an obsession with facts and records aren't its only flaws. Perhaps the major difficulty is the lack of illustration. There are quite a few bridge photographs, but nowhere near enough to show all the bridges discussed, and precious few diagrams which might help to explain how the bridges work and behave. These combine to make it a tough slog of a read. Despite this, I learned a great deal from it, and would recommend it to any bridge engineer interested in the subject.
Posted by The Happy Pontist at 8:08 PM 2 comments:

Winners of the IStructE Structural Awards 2012 announced
Supreme award for West Gate bridge strengthening. Prizes for Crystal Bridges at the Museum of American Art, Jarrold Bridge in Norwich, and for Compiègne Bridge. Commendations for the Derry Peace Bridge, and Poole's Twin Sails Bridge.

Footbridge in Ljubljana
Not sure what minimal means? You do now.

Award for Europe's most beautiful pedestrian bridge
In the eye of the beholder, and all that.

Four bidders in for New Wear crossing
Contractors keen on the chance to build £133m icon. The tender process is expected to take about six months.
Posted by The Happy Pontist at 11:32 PM 1 comment: