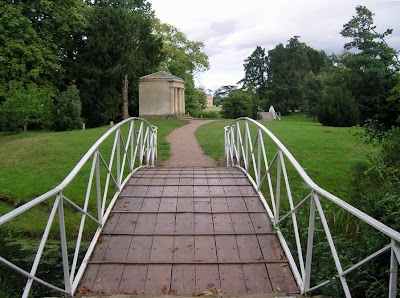 Right, I'm back from a couple of trips and have a backlog of bridge photographs to post here. First, a few from Worcestershire, both ancient and modern, and then a couple of significant footbridges from Yorkshire will follow. 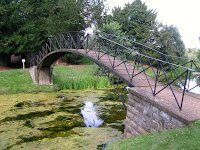 Croome Park is a property and parkland developed on behalf of the 6th Earl of Coventry in the 18th century by the landscape designer Lancelot 'Capability' Brown. Various elements of this beautiful but intensely artificial park were contributed by Robert Adam and James Wyatt. Over the years, much of it fell into disrepair, but the National Trust has been carrying out restoration work since 1996.

There are various bridges at the site, several of which were designed by James Wyatt and recently restored by Capps and Capps Limited. One is a small stone arch, and there are three wrought iron arch footbridges spanning various arms of an artificial lake. 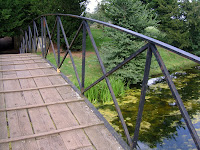 The ornamental bridge is described in The National Trust Book of Bridges as "building bridges for the adornment of the landscape as much as for the fulfillment of practical needs". The formula for landscape gardens developed by Brown and others generally involved water features, and frequently a bridge was called for both to cross the water and to appear reflected in it. Stone Palladian bridges were popular, but so were decorative iron bridges.

The three footbridges at Croome all have a very practical purpose, forming links in a footpath encircling the garden lake. All are arch bridges, with the arched bridge deck supported by delicate haunches below, in wrought iron imitation of cast iron style. How much the "truss" parapets contribute to the bridges' strength and stiffness, I don't know. They certainly didn't move much underfoot (although it was fairly easy to get them wobbling sideways). The longest of the three has a sign warning that no more than three persons should stand on it at once.

There are two things I like about these bridges. 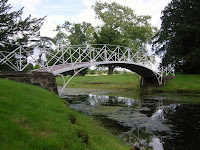 The first is their lightness. The arch itself is exceptionally slender by modern standards, and the curved haunching below so delicate that it's hard to see that it offers much support. The parapet is refreshingly flimsy and open, something that would be hard to achieve in a modern structure.

And indeed, that's where much of the appeal lies: these elderly bridges, designed by someone who certainly was not a bridge specialist, are far lighter than their modern equivalents, while still feeling sufficiently robust. It's a challenge from the past to the present - how can we too, design bridges which are striking in their presence yet elegantly minimal in appearance? 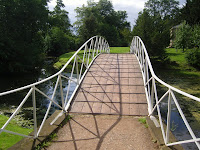 The second thing I like is the use of the parapets as a structural element. This is something which is still a feature of modern footbridges, as in the identikit Vierendeel truss designs which bedevil the urban landscape. However, these modern equivalents have a far heavier appearance than the Croome Park structures. I'm sure there's more still to be done where the parapet, as here, contributes to the bridge's strength without providing the sole structural support.

Further information:
Posted by The Happy Pontist at 11:20 PM