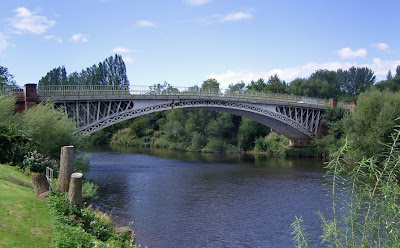 Continuing north from the Sabrina Bridge, the last structure I visited on this particular trip was Thomas Telford's Holt Fleet Bridge, which is the next span across the River Severn (there's an 1844 iron arch bridge at Bevere Island, but it only spans part of the river). 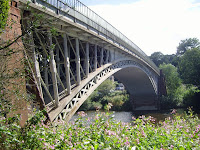 Telford's cast iron arch at Holt Fleet was completed in 1828, and spans 46m across the Severn, carrying a roadway. It was built by William Hazledine, and is now Listed Grade II. It replaced a ferry, and is now the only highway crossing in the 12 mile stretch of the Severn between Worcester and Stourport. 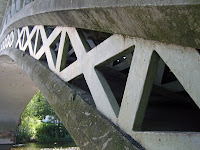 As originally built, the bridge had five cast iron ribs supporting the deck via X-shaped lattices. The ribs were cast in 6.8m long segments. The bridge was strengthened and widened in 1928, by encasing both the upper and lower members of each 1m deep rib in a slab of reinforced concrete. The more vertical spandrel struts were also encased in concrete, and the original 32mm thick iron deck plates were replaced with a concrete beam-and-slab deck. I imagine that access for inspection and maintenance between the two arch slabs must be difficult if not impossible. 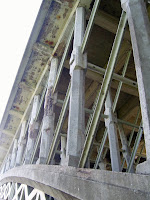 The concrete works have deteriorated considerably since then, with a 7.5 tonne vehicular weight limit recently placed on the bridge following inspection and assessment work. At the time of writing, considerable work is planned throughout 2011 and early 2012 to refurbish the bridge, with design by Halcrow. This will involve essentially reconstructing the reinforced concrete struts from scratch. The photos here show that the condition is poor, with extensive spalling, and rust staining in places.

It will be good to see the bridge improved from its current somewhat dilapidate state. Nonetheless, it's a fine structure, and a good example of Telford's work. There's a similar Telford bridge at Eaton Hall in Cheshire, which preserves the cast iron spandrel tracery and is much better looking, plus of course his classic span at Craigellachie. Galton Bridge, at Smethwick, is also cited as similar, but seems to me to have a different spandrel bracing pattern.