Proposals for a new £3m cycle bridge in Bradford have been submitted for planning consent. The structure replaces an existing footbridge which has steep ramps and is too narrow for cyclists, and is funded by Sustrans as one of their Connect2 schemes. It forms a link in a proposed "living street" (which appears to be code for a tree-lined pathway). If planning consent is granted, work on site should start in 2011, with the bridge completed in 2012.

The planning application (currently available online - search for "Manchester Road Bridge") reveals that the bridge has been designed by Bradford Metropolitan District Council's in-house engineers and landscape designers. It takes its inspiration from a series of local bus shelters designed in a purportedly Deconstructivist style. The design and access statement tells us, for example, that the bridge columns "have a simple human profile aimed at providing a positive link to the ground", which is something I always find nice about columns. 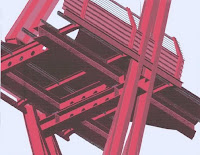 The bridge's only feature of interest is a distinctive angular gateway which extends one of the columns above deck level (17m tall in total), but serves no structural function. The structural logic seems somewhat odd, since this column is positioned in the middle of the roadway, and it would clearly have been possible to omit this support position entirely and suspend the bridge deck from a pylon to one side, which would also fulfil the gateway feature.

The choice of red paintwork (matching the bus shelters) is a bold decision, especially for a structure which appears so keen to adopt an "industrial" look. To me, the whole effort is uninspired and unattractive, a step backwards visually, and certainly a lost opportunity to exploit the opportunities of structural engineering. The use of the non-structural gateway reminds me of some footbridges in Stoke-on-Trent, a bit of a throwback to the 1970s.
Posted by The Happy Pontist at 9:13 PM

Drove past this earlier in the week, the columns are in place. Totally agree with your assessment. This will be an eyesore, stiffeners everywhere, the dischord between the concrete plinths and steel columns looks odd. I can't believe they've used the bus shelters as inspiration - they look pretty naff. The only ones that will love it are the pigeons who will enjoy making roosts all over it!!