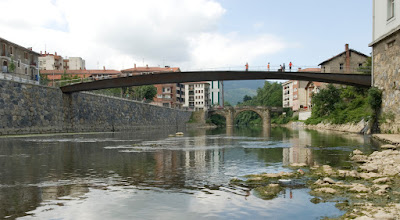 My London-based readers may be interested in this seminar, organised by the Imperial College CivSoc, which takes place from 12-1pm, Friday 10th June, Room 207, Skempton Building, Imperial College, London.

Mario founded design firm Anta IC in 2003, and has designed a number of geometrically interesting and innovative bridges. such as the example depicted above. These are all bridges where the formal geometry is derived from consideration of the span's internal forces, and I've been hoping for some time they'll get some greater attention, so this is a good opportunity to find out more about them - there's also plenty of information on the Anta IC website.
Posted by The Happy Pontist at 12:24 AM No comments: 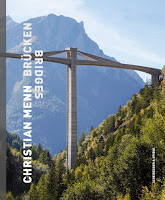 ] is in matching German and English throughout, so a good chance to find out more about the man who is generally recognised as one of Switzerland's finest bridge designers. The previous monograph, Christian Menn - Brückenbauer (2007) was in German only.

The book covers pretty much all of Menn's significant designs, interspersed with various essays, an interview, and tail-ended with a short biography, list of works and the like.

Menn explains his own philosophy of bridge design, which is also a philosophy of bridge procurement, with some thoughts on design competitions and design standards. For Menn, bridge design must be led by engineers, as structures must satisfy all applicable standards and be economical as well as beautiful. His view is that design is the art of achieving an appropriate balance, with economy and aesthetics apparently incompatible, but to some extent reconciled in the choice if appropriate structural form.

I've discussed Menn's philosophy in detail on a previous occasion, so won't repeat that here.

Menn's signature bridge design was the concrete arch, especially in its deck-stiffened guise as pioneered by Robert Maillart. The first project in this book is the magnificent 72.5m span Crestawald Bridge, and there are many more similar examples. They have been beautifully photographed by Ralph Feiner (all the photos I've used here are by Feiner), and generous space is given over to these images, as well as technical diagrams for each bridge in plan, elevation and cross-section.

With the exception of the Crestawald arch, most of Menn's bridges of this type use a polygonal arch, the engineer's rational alternative to a pure curve. The bridges therefore have a Germanic austerity to them which generally sits well within the mountainous Swiss landscape. I particularly admire the way in which they rely on the strength and purity of their structural form: the concrete finishes are sometimes poor and the detailing negligible, but that's simply not what they are about.

Menn has also been responsible for a number of admirable post-tensioned concrete box girder designs, again most notable for their simplicity and clarity of intent - no fussy cross-sections or pier sculpting, they rely on their visual directness for effect.

After a while, it's hard not to feel bludgeoned by repetition - most of Menn's career has been distinguished by monotony, and a number of basically very similar bridges are presented in perhaps more depth than is merited.

I also occasionally find myself doubting his aesthetic judgements. He is highly self-critical, an admirable trait, but is he always right in his view of his own work? He complains that the twin-legged piers of the Felsenau Bridge would have been better as single legs, but I find this hard to credit, as this is a very high quality bridge as built.

In the later years of his career, Menn's work was sometimes uneven. I greatly admire the elegant cable-stayed Sunniberg Bridge but find the Ganter Bridge to be over-rated in the extreme, with its stiff rectangular piers and their clumsy connection to concrete fins in which its support stays are embedded.

The Leonard P. Zakim Bunker Hill Memorial Bridge in Boston, USA, is for the most part a fine design, but it is cursed with a gargantuan 56m wide deck and I can't help wondering whether it would have been better as two smaller, parallel bridges.

Similarly, some of Menn's unbuilt designs in the middle-East show significant departures from the clarity of his earlier work. The pylon for the cable-stayed Al Showah Island Bridge consists of a spindle braced by concrete fins, and seems over-wrought, as does an arch design for the same scheme, where the rise of the arch is much greater than structurally necessary.

Setting all that aside, this is an excellent and well-produced book, and overall Menn's oeuvre certainly deserves this degree of attention. The details of his individual designs are not necessarily something to emulate, but this is largely because few readers will be designing works for the Swiss landscape, and most will be working in forms other than solely reinforced and prestressed concrete. What stays with me the most is his disciplined approach in finding the most appropriate structural form, and in then keeping it simple and unembellished. From experience, that's nowhere near as easy as it sounds, and something that few have achieved as successfully and consistently as Christian Menn.
Posted by The Happy Pontist at 8:18 PM No comments: