The shortlist for the Bath Quays footbridge design competition has been announced. Forty-nine entrants have been whittled down to six, and it's a strong field:
The teams will develop their designs for submission in June, with the winner expected to be announced in August.
Posted by The Happy Pontist at 9:11 PM No comments: 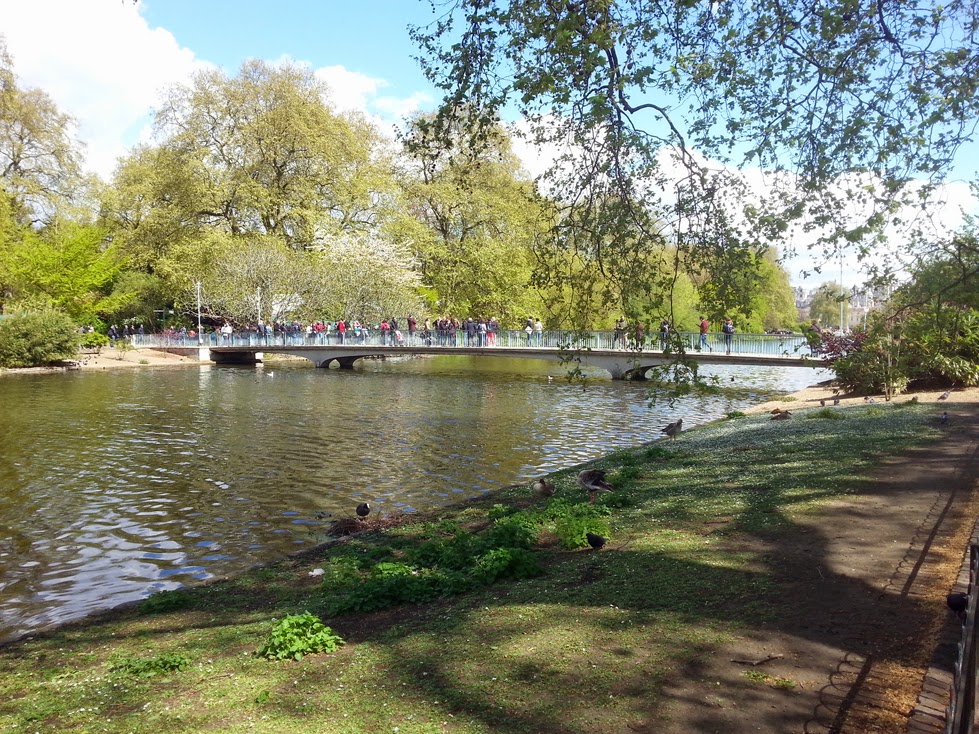 I've not visited many new bridges recently, but I did find a moment for a quick walk in St James's Park, London, to see the "Blue Bridge" which spans St James's Park Lake.

London is a city well-blessed with parkland space, and although St James's Park is the smallest of the central London parks, it is still rather lovely. Much of its current layout, including the lake, dates from John Nash's remodelling of the park in the late 1820s. Prior to Nash's work, the park was bisected by a canal, which was bridged by a timber bridge supporting a Chinese-style pagoda from 1814 until 1825.

A suspension footbridge was built across the lake in 1857, designed by James Meadows Rendel. A visitor's guide of 1865 charmingly commented that "a suspension bridge for foot-passengers was thrown across the lake, to the infinite comfort and delectation of the frequenters of the Park, who had been previously compelled to effect a wearisome circumambulation." The suspension bridge was replaced by the present-day bridge in 1957, designed by the Structural Engineering Branch of the Ministry of Works, and built by Higgs and Hill Ltd. The architect was the Ministry's Eric Bedford, better known as one of the designers of the Post Office Tower.

The new bridge was required as a result of Rendel's span being in need of £10,000 of repairs, and additionally it required temporary support whenever crowds were expected (highly visible in a 1937 newsreel). An anonymous donor offered £23,000 to cover the cost of a replacement bridge. Little thought initially seemed to be given to the historic value of the old bridge, and it's interesting to wonder how the discussion on replacing such a bridge would proceed today. By the time the House of Lords debated the bridge replacement plans, the project was already a fait accompli.

The bridge is a three span structure comprising lightly arched and haunched concrete beams. There are two concrete beams side-by-side, with a central span of 21.34m, and side spans of 10.67m. The bridge is 4.1m wide. At the centre, the total concrete depth is 14" (356mm), giving a span-to-depth ratio of 60, impressively slender.

I'm not entirely sure what I think about the resulting bridge elevation, as there seems to me to be too great a disparity between the slender midspan and the heavy piers, and the very elongated elliptical curve to the soffit is a little awkward.

The slenderness relies on three features of the engineering design: first, that the concrete is post-tensioned, which maximises its bending capacity. Second, that it is a haunched continuous beam, which means it is essentially a cantilever structure, with large hogging moments at the piers, and a very small sagging moment at midspan (compare the Forth Railway Bridge). Third, the midspan sagging was further reduced during construction by setting the two end supports higher than their final position, and then dropping them, inducing a hogging moment throughout the centre span.

The problem was addressed by making the bridge's supports non-symmetrical. Originally, it was proposed to have bearings below both the main supports. Fixing both bearings, by casting the pier legs in concrete, would solve the vibration problem, but led to problems under thermal and creep effects. The final solution was to fix one pier, while leaving the other partially free as a rocker bearing. This raised the natural frequency to 3.6 Hz, a figure which was validated by testing the as-built bridge with three hundred marching guardsmen.

The bridge's concrete used white aggregate and white cement to achieve a sufficiently pale colour, while the blue painted railings have given rise to the bridge's present name, the Blue Bridge.

As can be seen from the photographs, this is a very popular bridge, although not because of its architectural elegance or structural engineering achievement. This bridge is much more than just a shortcut across the lake, it is primarily a viewing platform.

The axis of the lake opens up perspectives across the park, towards Whitehall and Horse Guards Parade on one side, and Buckingham Palace on the other. Although I've not seen anything to indicate that a bridge was part of John Nash's original plan, the bridge allows the lake to be more than just a picturesque part of the landscape and source of drinking water for plentiful wildlife. It establishes some of the key views in the Park, and ensures that they are uninterrupted by crowds.