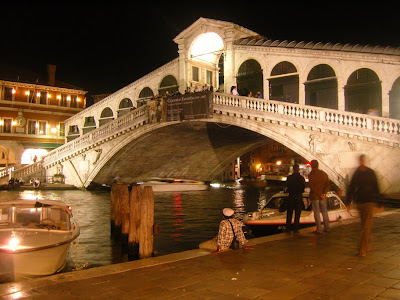 Along with the Bridge of Sighs (on which, more later), the Rialto Bridge is one of the most famous tourist sights in Venice. For over five centuries, it was the only bridge across the Grand Canal, until the first Ponte dell'Accademia was built in 1854.

The canal was first bridged at this site by a pontoon bridge in 1181, replaced by a wooden bridge in 1255, incorporating a drawbridge opening section (as depicted by the painter Vittore Carpaccio). This, and several successors, were to collapse and be rebuilt until in 1503 proposals were made to build a more permanent stone structure.

The timber bridges already incorporated the shops that were to become one of the Rialto Bridge's most distinguishing features. They provided a rental income which helped to cover the bridge's maintenance costs. 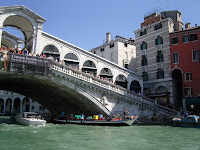 In the late 16th century, a bridge design competition took place, with submissions from Michelangelo, Giacomo Barozzi da Vignola, Guglielmo Marastoni, Gugliemo di Grande, Jacopo Sansovino, Andrea Palladio, and others (several of these can be seen online). Many of the designs, including Palladio's, were for three span structures, but the Canal is relatively narrow at this point and the authorities preferred a bolder single span solution to minimise the impact on navigation (and possibly because the cost of foundations was lower overall).

One of the three-span designs, by Vincenzo Scamozzi, was adopted in 1588 as a template for the single-span bridge which would be built over the next three years. The builder, Antonio da Ponte, adopted the proposed layout of shops and stairways, as well as the balustrades from Scamozzi's design. Scamozzi himself severely criticised the attempt to build a single span, which he thought likely to collapse. 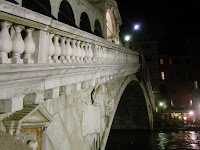 Da Ponte's bridge spans 29m, the shortest of the Grand Canal Bridges, with the arch rising 6.4m. The arch thrusts are substantial, especially for the weak Venetian soils, and as with many such bridges the horizontal component is reduced by adopting a slender arch section (1.25m thick) at the crown, with more weight above the abutments. Part of the arch thrust is stabilised by the loads from adjacent buildings.

The bridge as built was painted many times by Canaletto, who also painted a vision of what Palladio's proposal would have looked like had it been adopted. 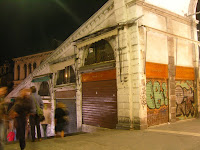 Today, it remains a fine bridge, although its attraction is as much as a vantage point from which to survey the Canal as for its appearance. Many inhabited bridges have a deep, stocky appearance, but the dark shopfronts allow the upper arcade to appear lighter than it really is. Because the arcades are set back, the arch can still be seen as a relatively slender element in its own right. 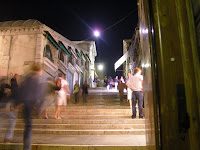 Closer at hand, however, the bridge is remarkably run-down, with considerable grime and graffiti adorning it. Generally, a certain level of dilapidation provides much of the charm in Venice's buildings, and if they were all cleaned up and restored to their original appearance, a certain Disneyland feel would probably be the result.

Nonetheless, I find it surprising that Venice allows a major historic landmark such as the Rialto Bridge to be left in this condition.

Further information:
Posted by The Happy Pontist at 9:39 PM