Arup and Tonkin Liu have been announced as the winners of the RIBA Salford Meadows bridge design competition. I last mentioned this scheme back in December when the shortlisted designs were released for public consultation. 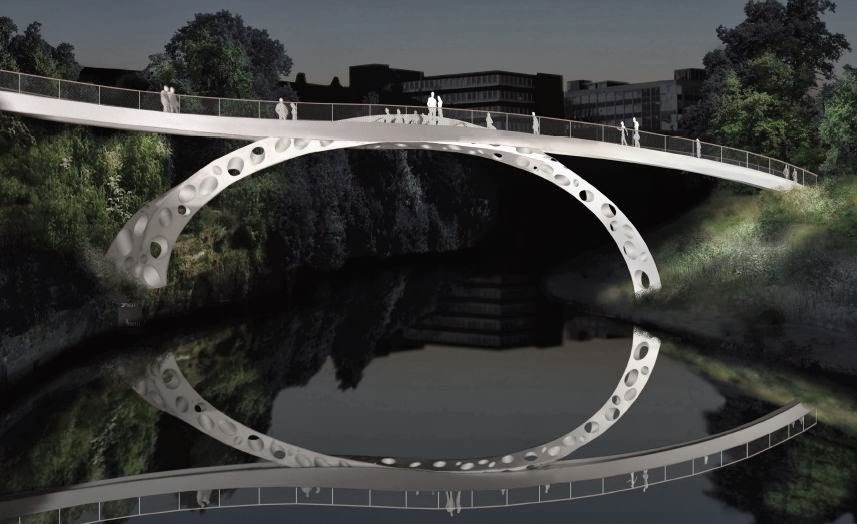 Jury member Renato Benedetti describes the design as "poetic, innovative and elegantly engineered". Designer Mike Tonkin highlights its "biomimetic design". Local mayor Ian Stewart noted: "We will now be working with our partners to find the funding to create this stunning new bridge in the heart of Salford that will add to the city’s global reputation."

Sometimes you really just have to sit back in your chair and wonder quite what was going through the minds of all those involved.

The "poetic" nature of the bridge presumably relates to the designer's concept that it was some kind of silvery tendril, sprouting across the river from a seed, an idea which informs not only the bridge's S-shaped plan but also the layout of landscaping at one end. This landscaping is vital to providing a DDA-compliant ramp gradient at a site which, from the contest submissions, appears to have a very large level difference. The Arup / Tonkin Liu design is made to work by eliminating large areas of car parking in front of a pub and adjacent university building.

The structural engineering is interesting. The arch is a triangular steel box section which curves in plan and also twists. Arup's analysis indicates 10mm steel plate to be sufficient, and deformation and local buckling is prevented by the insertion of steel tubes through the box, creating the bridge's distinctive Swiss-cheese appearance. They state that these tubes eliminate the need for the normal box stiffeners and diaphragm plates, and also that the geometry is arranged in such a way that each face of the box can be bent from a flat plate. I find the latter point very hard to believe, given the twisting geometry shown on the visuals, and would reserve comment on the ability of the tubes to eliminate other stiffening. The FEA diagram included in the contest submission is certainly not very convincing.

The bridge deck is of similar geometric complexity, consisting of two paired box girders, again in triangular form, which curve in plan, vary in depth, and intersect and diverge at different places along their length. Although lacking in cheeseholes, the geometry of their surfaces is probably even more difficult to fabricate, and if 10mm plate is used throughout, likely to be subject to all sorts of out-of-tolerance imperfection. It will be a shame if it doesn't look good close up, because the perforated arches provide a pretty handy climbing frame from which it can be examined.


The parapets are a much more conventional system, arranged vertically with steel posts, a timber top rail, and a steel mesh infill. The designer seems to have made the entirely reasonable decision for them not to compete visually with the hyper-real brushstrokes of the main structural elements, which is not unreasonable in the circumstances.
This is an extremely bold design, and one which will be challenging for any designer (let alone the poor builder) to progress. There's little in the contest submission to provide confidence that what is depicted can be delivered at a reasonable level of quality, and I think there's absolutely no chance of it being done for the £2m figure that the designer states.
As with the ill-fated River Wear Crossing, which also emerged from a RIBA competition jury, this is a bridge which is technically demanding to the extent that the risks involved in choosing it are very high indeed. There must be a strong possibility it will also end up as unbuilt, not that this would an unusual outcome for RIBA, with only 2 out of 7 of their bridge competitions that I looked at in 2009 resulting in construction.
Of course, none of these issues are reasons to reject the design. If the customer wants flash and whizz, and can tolerate the likely budget, then this does seem the flashiest and whizziest of the four shortlisted entries. The other three contenders appeared more pragmatic and certainly in some cases less expensive, but I admire the desire to reject conventionality and pursue a flight of fancy. Perhaps that is what was in the jury's heads. 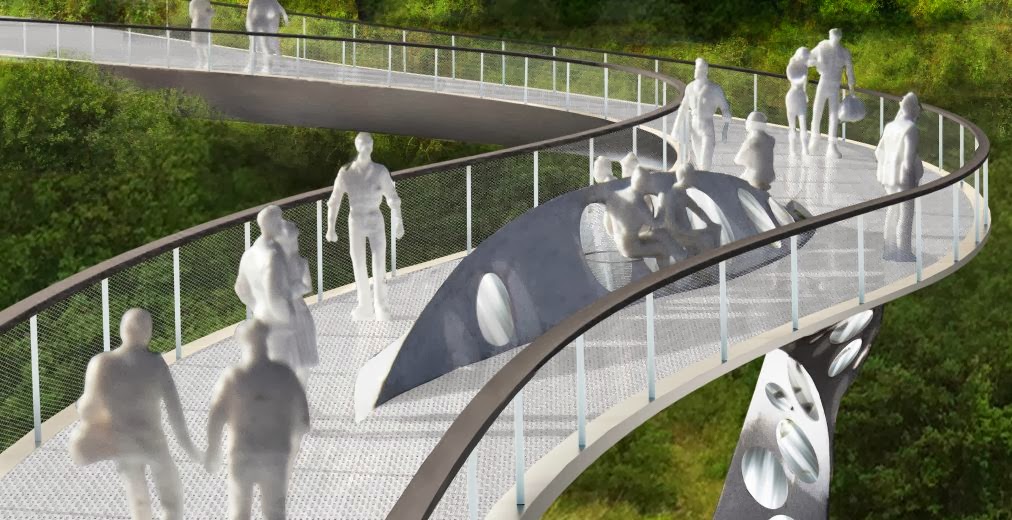 For me, the technical issues are secondary to the aesthetic in this instance, and to me the winning design looks both alien and ugly. Alien, in its twisted melange of retro-futuristic detritus, like the disposable plastic parts from an Airfix model of some end-of-70s science-fiction TV show. And ugly in its carefree trashing of such old-time conventions as innate elegance or harmonious relationship to context.﻿
Posted by The Happy Pontist at 9:12 PM 7 comments: