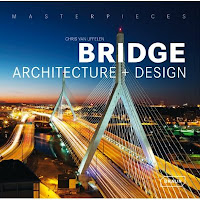 However, before I tell you what's good about this book, let's get some of the negatives out of the way.

This is a very middle-of-the-road coffee-table architecture book. So don't expect very much information on the engineering or technology behind each bridge, don't expect comprehensive information on bridge materials or dimensions (such as spans, in many cases), don't expect a critical point of view or even very much on what makes certain bridge designs notable.

This is also a book with a highly idiosyncratic choice of bridges, so excellent recent footbridges such as Kurilpa in Brisbane, Forthside in Stirling, Knokke, or Lake Austin, aren't in here. In the UK, for example, the unbuilt Lochnagar Street and River Hull bridges are included, but the Sackler Crossing at Kew and the Infinity Bridge at Stockton are out.

For those bridges that are included, the text (in English, French and German) is fairly brief (and in one or two cases, appears to have been written by the designer or adapted from their publicity material). This is a book to buy for the images, not for the contextual material.

Pretty high amongst my quibbles is its practice of listing most structures by the name of the architect, regardless of whether they were the lead designer or not, with the structural engineer's name generally buried in the small print. In several instances (e.g. Millau Viaduct), there's no design engineer mentioned at all, and the builders are entirely invisible. It's not the first architectural book to take this thoroughly inappropriate approach (Jobson and Pearce's "Bridge Builders" was a similar offender), but it's a shame.

There are also problems with attribution: Alan Baxter is credited as structural engineer for the Castleford Bridge, but not Tony Gee who actually did the detailed design; while Rosales + Partners claims architectural credit for three bridges (Leonard P Zakim Bunker Hill Bridge in Boston; Liberty Bridge in Greenville; and Woodrow Wilson Memorial Bridge in Washinton DC), although for the first of these, Rosales was employed by Wallace Floyd Associates (who have suggested his involvement was not significant), and the other two should surely share credit to Frederick Gottemoeller, given that Rosales was part of Rosales Gottemoeller and Associates when they were designed. Gottemoeller certainly claims a key involvement in these bridges on his website.

My final complaint is that the book is far from rigorous in stating which images are photographs and which are renderings, with some finished bridges represented by both (e.g. Gateshead, Swansea's Fabian Way). Several bridges are included which are unbuilt, and some which will never be built (e.g. SLA's Rijnhavenbrug design, and a design for the Bering Strait crossing), although no distinctions are ever made. In the Rijnhavenbrug case, it's actively misleading, since the actual competition winner by Quist Wintermans is neither shown nor even mentioned.

So, I'll put the problems to one side, and tell you where the book is a success.

Of the 69 bridges featured, some have had plenty of exposure elsewhere (Gateshead, Sundial, Millau). But most of the structures were unknown to me, and the coverage of European bridges in particular is very good: this is where an idiosyncratic selection is a good thing. Several structures are well known to pontists but have not yet appeared much in print: Calatrava's Quarto Ponte sul Canal Grande (looking resplendent here), the amazing Grand Canyon skywalk, the Liberty Bridge in Greenville.

But amongst the lesser-known bridges, there are several which are intriguing (such as Craigieburn Bypass, Melbourne) and a few which are particularly excellent (Brick Pit Ring in Sydney, the Passerelle Valmy in Paris, and Next Architects' Melkwebrug proposal).

The photos are of high quality and in several instances quite stunning. It's a great book to leaf through, and there are several bridges I'll undoubtedly return to look at again and again. The flaws certainly didn't stop me from enjoying the book.
Posted by The Happy Pontist at 8:11 PM

just a small typo: it's Melkwegbrug

I can't decide if the Craigieburn bypass bridge is a huge eyesore or a fabulous statement. No doubt time will tell.

"Intriguing", I think I said. In other words, I admire its boldness while not being sure it's entirely a good idea ...