On my same visit to Manchester which took me to the New Islington Bridge, I also spotted another footbridge in the same vicinity which I thought merited inclusion on this blog. It’s not a spectacular, or architecturally exciting bridge, and it doesn’t seem to have been the result of any design contest or had any publicity. Indeed I have searched but failed to find any details of the client, designer or builder. 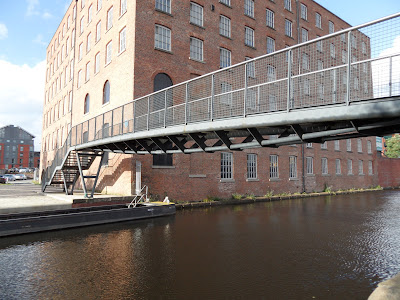 It's the third interesting modern footbridge I've encountered spanning Manchester's Rochdale Canal. As well as the one at New Islington (which Leech Street is about a quarter of a mile to the south of), there is the minimalist Architects Bridge in Castlefields.

The main reason I thought it was of interest is simply because it’s a representative of a bridge form which is very rare, certainly in the UK, the lenticular bridge.

Terminology is never exact in this area, and the bridge can be thought of variously as an untriangulated lenticular truss (Brunel’s Royal Albert Bridge being the pre-eminent example of a lenticular truss in the UK); as an inverted bowstring arch (where the “arch” is in tension rather than compression, and the reverse is true of the deck); or as an "underspanned" self-anchored suspension bridge, where the suspension cable is below the deck rather than supported above it from towers.

Bridges of this form are rare because it’s normal for the geometry of a span to be determined by the conflicting imperatives of maximising clearance above the obstacle it crosses, and the need to minimise the level of the bridge deck, avoiding costly approach structures. I’ve covered some historical examples here before, at Roxburgh Viaduct and Elgin, and will share a more modern example shortly. Other historical examples include Robert Stevenson’s proposal at the River Almond, and Alexander Nimmo’s proposal in Ireland, while other modern examples in the British Isles include Arup and Wilkinson Eyre’s bridge near Limerick. There are also variants on the form where a level truss has been substituted for the lenticular elevation, as in the rather ugly Mailbox bridge in Birmingham. A list of similar modern bridges is given in Ruiz-Teran and Aparicio's paper (see further information, below).

Where conditions do allow its use, it’s a form of bridge with the potential for remarkable slenderness, because the compression member is combined with the load-supporting bridge deck, both of which require a certain thickness to resist, respectively, buckling and the effects of local concentrated loads. Combining the two therefore minimises the overall depth of material when the bridge is seen in elevation, to an extent only otherwise possible in a suspension bridge, which requires obtrusive towers and often expensive foundations.

Seen in that context, Leech Street Footbridge is not one of the greatest examples of the form. Rather than using a slender bar or thin cable as the tension member below the deck, it is all of tubular steel. This is, on the whole, cheaper to assemble, with the weight of the steel tubes offset by not needing to fix or tension cable elements.

Even so, I think the bridge has considerable simple charm, all of it down to the inherent attractiveness of the structural form. It would be nice to see more bridges of this sort, and looking at this example, it's hard not to imagine they could be built quite cheaply. 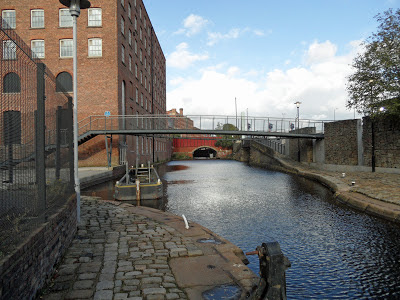 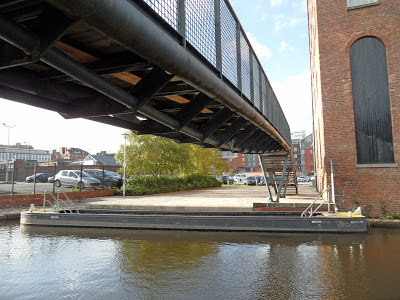 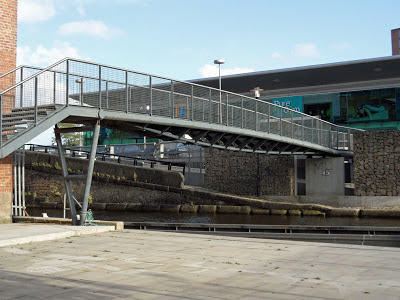 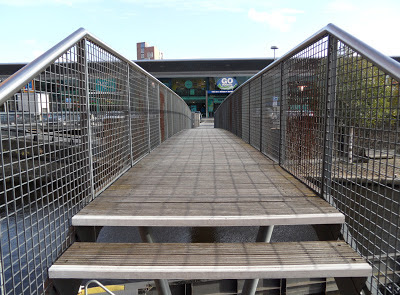 Posted by The Happy Pontist at 8:53 PM No comments:

I have a few more bridge reports to post, just waiting to get some time to sort out the photographs. While that waits, here are some bridges in the news ...

The 1,000-year-old wooden bridges that keep modern China moving
I'm no fan of the Daily Mail, but it's great to see these brilliant bridges getting some attention. On this subject, see also my review of Chinese Bridges.

Whitchurch Bridge denied £700,000 tax rebate
It would be interesting to see if freedom from taxation in perpetuity could be used to help incentivise new privately-funded bridge construction today ...

New Exeter footbridge is a British first
I saw this reported elsewhere as Britain's first FRP footbridge, which of course it isn't, but it is remarkable to see a Grade II Listed structure replaced entirely in plastic and still retain its heritage status.

Multi-coloured footbridge is made from 400 giant pieces of Meccano costing £90,000
Huh?

New Brayford level crossing footbridge designs submitted
It's great to see evidence that Network Rail are becoming more open to including aesthetics in their bridge designs, at least where public or political pressure demands it. The latest designs (top) are a vast improvement on the previous ones (bottom). 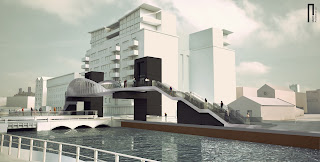 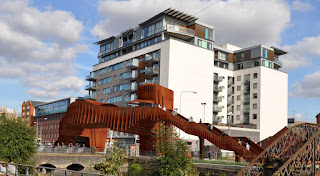 $40 million Adelaide Oval footbridge over the Torrens will be ready for the Ashes, State Government says
Or heads will roll, presumably. This wasn't the most interesting of the designs submitted for this bridge, but I don't think they have all been made public, unfortunately.

Calatrava "Bridge" No. 2: We're Spending an Extra $7 mil to put Lipstick on a Pig
I'm only linking this story because the headline is so amusing.

Smart Design and Super Materials Are Stretching Bridges
Bridge design and construction technology isn't stuck in a rut - a brief guide for outsiders.

Design tweaks to keep Blue Bridge within budget, says city hall
Translation: Victoria, Canada's new bascule bridge design is over-running on cost, but luckily we've spotted it early. It's also known as "value engineering". Full detail of the "tweaks" are here, it's a shame in particular that the bridge truss cross-sections are to be compromised. I wonder what the architects think?
Posted by The Happy Pontist at 6:22 PM No comments:

It was October 2008 when I kicked off a series of "bridge competition debris" posts with a discussion of Manchester's New Islington Bridge. As with several bridge design competitions organised round about that time by RIBA, it garnered its fair share of attention, with 87 entries submitted for what was expected to be a relatively low-budget scheme.

The project demanded a new pedestrian bridge to span the Rochdale canal and an adjacent canal basin, connecting footpaths in several directions and at different levels. After the initial attention, it all went very quiet, and I thought the project had died due to lack of funding. Last year, I discovered this wasn't actually the truth, and the winning bridge had been built, seemingly with little fanfare.

Designed by Gollifer Langston Architects with Stockleys and Michael Hadi Associates, it's currently something of a bridge to nowhere. For canal towpath users, it's highly useful, but it was intended to be a focal point for a regeneration scheme that vanished down the black hole of the recession. 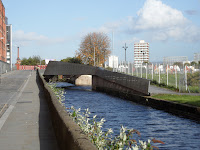 I've included a couple of the original competition images above, both to note how faithful the final bridge is to the original concept, but also to wonder whether from those images anyone could have predicted the reality of the bridge as-built. Particularly with the colour drained away, the real-life bridge is a little dull, squat even. 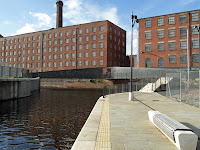 In form, it's a pathway which wends its way above a three arms of the canal, supported along one edge by a metal spine. The spine is triangular in cross-section, but feels more like a sheltering wall than a structural element. It allows the bridge deck itself to be very thin, minimising the length of the approach ramps. 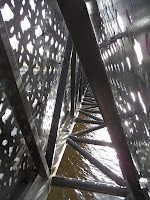 The spine is a triangular steel truss in structural form, clad on both faces in perforated sheet metal. Unlike many contemporary footbridges, the structure is not the star here.

The bridge’s lack of colour is a particular disappointment given the canal setting – bridges over canals are often colourful, as may be glimpsed in the background of some of my photographs. If eventual development of the area introduces more attention-grabbing architecture, this will matter less, but for now the bridge is a gloomy monolith, a cheerless crescent offering only views of a wasteland. 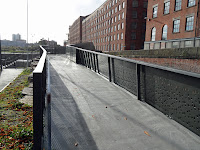 The bridge is also let down by its construction. Minimalism thrives on sleek, simple lines, with well-crafted materials. Some of my photographs show kinks and unevenness in the parapets and their cladding, making the whole enterprise look considerably cheaper than I imagine was intended. 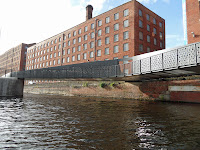 The bridge does feature one little conceit for those who look hard enough - printed onto its underside are the words "CAST NO SHADOW", which will appear reflected in the canal should it ever be perfectly flat. If you squint hard at the photograph on the right (click to enlarge), you may be able to see this. 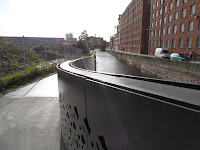 The bridge was one of the few “concrete” achievements of a spate of post-millennial bridge design contests organised by RIBA. Many of its stillborn siblings were the victims of general economic malaise, and others perhaps continued the millennial trend for structural flamboyance beyond its natural lifespan. There is therefore, perhaps, an argument that understatement was what was necessary for an architecturally-led design on this budget to actually be made reality.

Compare Bootle’s Pennington Road Footbridge, the only other RIBA footbridge contest design of its period to reach completion, which I featured here in October 2011. That was also modest in conception, but I think better detailing and construction left it at least a moderate success. 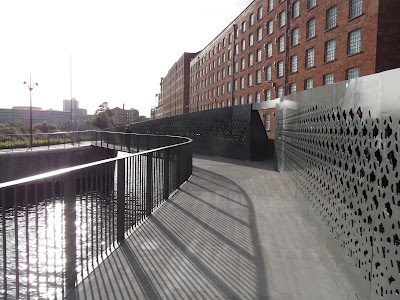 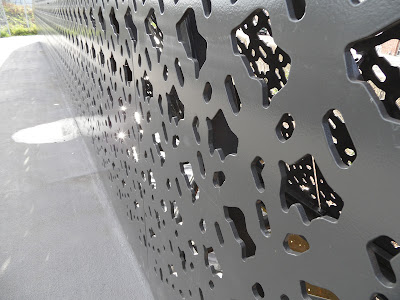 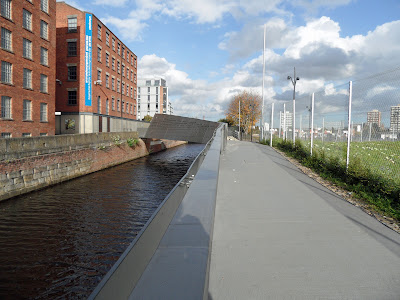 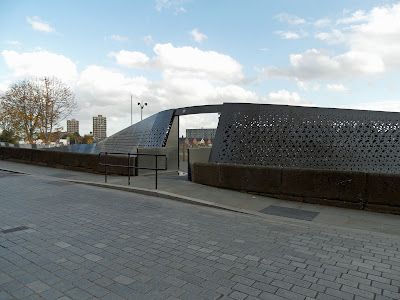 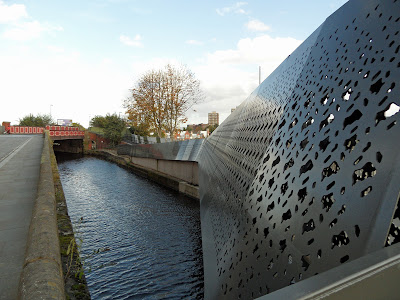 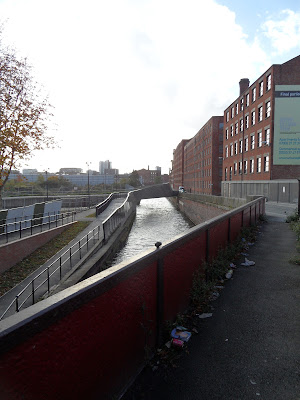 Further information:
Posted by The Happy Pontist at 9:48 PM 1 comment:

Many thanks to Moxon Architects for sending me through some images of a pedestrian suspension bridge they have designed with Flint and Neill at Braemar, in Scotland.

The bridge is, as yet, unfunded, but I guess it would make a welcome addition to the locality as there's no bridge across the River Dee in the immediate vicinity, and the area is popular with walkers and other tourists. I stopped off there during my tour of Scottish bridges last year. What's immediately noticeable about the Moxon / Flint proposal is how it consciously echoes a number of other white-painted suspension footbridges in the vicinity, particularly those at Garbh Allt Shiel, Crathie, Polhollick and Cambus O' May. Moxon kindly provide a cut-out-and-keep guide to these spans to emphasise the point (click any image to see it full size).

The longest of those bridges spans 55m, and if built, the bridge at Braemar would dwarf them, being 85m long (the span may be one reason there is no such bridge here already). 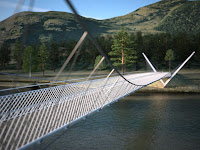 The structural design is a trussed suspension bridge, with triangulated hangers offering considerably greater stiffness than the more conventional vertical hangers provide (the cost is the need to prestress all the hangers to prevent any becoming loose). The preview images also show tie-down cables at either end, which will also provide considerable stiffness. The bridge deck consists of white precast concrete units, which will help damp vibrations. 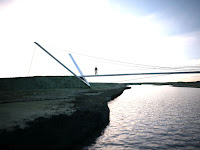 The main cables are inclined outwards and connected to V-shaped masts, so they are curved vertically in plan as well as elevation - this helps stiffen the deck against lateral sway (again, there is a cost, in the need for a more exacting erection methodology). I can't see a structural reason for why the masts are inclined backwards away from the river, but would be interested to hear if there is one.

I've included a few more images of the design below. If I were a betting Pontist, I'd bet this design will prove too expensive for the site, although the history of bridging the River Dee is one of reliance on wealthy benefactors to the community, so I may be proven wrong.

A simpler bridge design would perhaps use main cables in the conventional vertical plane, with inclined counter-cables below the deck to provide combined vertical and lateral stiffening. A timber or galvanised steel mesh deck would also keep costs down, although such a bridge has very little damping and hence be much easier to excite into motion. 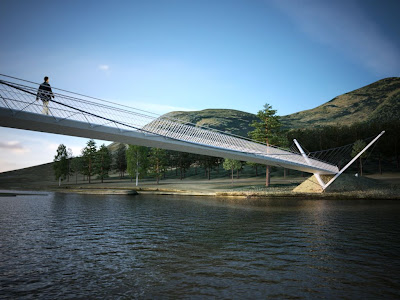 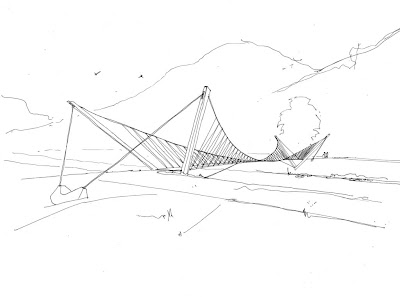 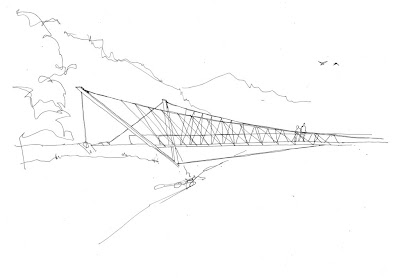 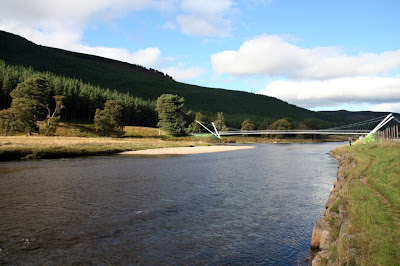 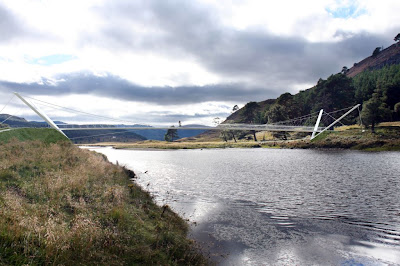