These came out a few days ago now, but I've only just had time to look at them properly.

This is a contest for a new £2.5m pedestrian bridge across the River Avon in Bath, organised by Bath and North East Somerset Council.

In May, six teams were shortlisted, and each given £5000 and eight weeks to develop a design. The teams are:


Now, all six entries have been released, although anonymously. You can have fun, if you wish, trying to guess the designers! A winner was originally scheduled for August, but this is now expected to be in November.

This is a very curious design, a propped cantilever bridge (intended to minimise physical impact on the historic south bank of the river) fabricated from a series of extremely lightweight trusses. It's fiddly to the point of being finicky, and would make a fantastic climbing frame for the locals to explore. The truss members are all of stainless steel, but painted, which is a genuinely baffling idea. 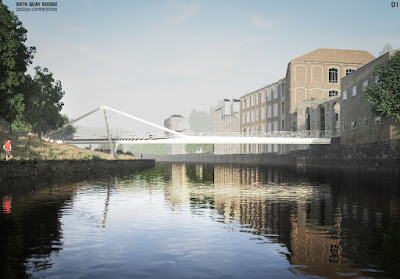 Again, this is a structurally bold design, and one which makes use of the same basic principle: support the bridge from the north bank so as to reduce impact on the south bank. It's an unusual "cable-stayed" bridge, with a steel box girder deck which is boomerang shaped in plan, and supported by a mast on only one side. The normal cables are replaced by steel ribbons. I especially like the detailing of the balustrades on this design. 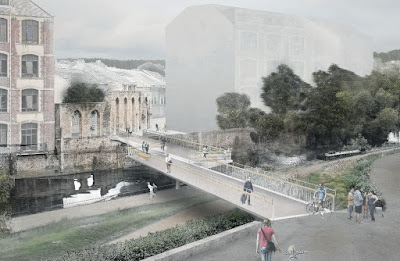 This entry comes with a name, the "zig-zag bridge", which describes its profile in plan. Architecturally, it is extremely restrained, so modest that the zig-zag is the barest nod to the need for the bridge to express something, anything. The money here has gone into expensive materials: stainless steel box girders and balustrades, a Bath Stone handrail, and a "precast granite" deck. I'm not quite sure what precast granite is, but it sounds expensive, anyway. 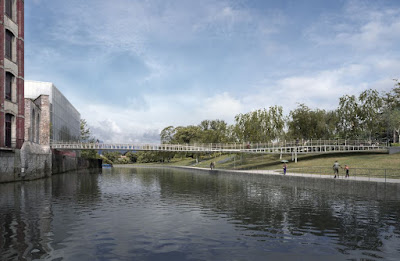 Captioned "Between history and modernity", the fourth design takes the idea of responding to a propped cantilever moment diagram as seriously as did the first, and with much the same logic. The bridge curves gently in span, and is supported by two Vierendeel girders, one on each edge of the bridge. These are shaped to provide almost a hinge at the point of structural contraflexure. They remind me a little of the Vierendeel ribs on Paris's Pont de Solferino, a Marc Mimram design. The designer has tucked the main supports away behind the edge girders, which would be implausible on anything other than a short footbridge. 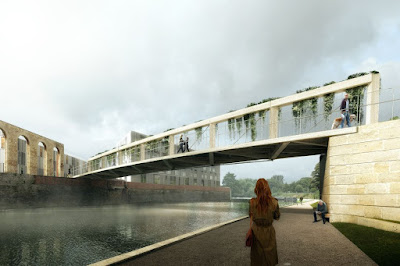 Now here's a design that I quite dislike. I loved the basic image, an elongated Ikea-like picture frame, with ancient Roman ivy already growing over it, but I think the design fails under closer examination. It's a bridge with a tall central timber truss with footways either side, possibly intended as a Vierendeel but that's clearly impossible in timber at any useful scale. Diagonal steel bars and a support framework for the vegetation fill in the truss bays, making it impossible to cross from one side of the deck to the other. 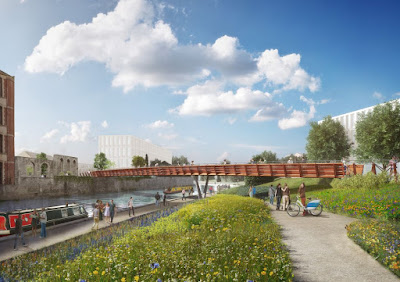 The final entry is the most intriguing, at least in terms of its engineering. It's a half-through girder bridge, with twin steel girders constructed from perforated weathering steel plate. The perforations are layed out to suit the stress patterns in the girder, which is constructed of a series of steel segments. The segments are stressed together using stainless steel prestressing cables. It's technically fascinating, although I think it's perhaps the least sympathetic bridge to this particular site, and a concept which may be more appropriate elsewhere.

For your amusement, here are my guesses at the various designers. I'm not going to forecast the winner, but if I had a vote, it would go for Entry 6.

The organisers of the design competition for a new footbridge at Tintagel Castle in Cornwall, England, have shortlisted six out of one hundred and thirty seven entries. A winner is due to be announced early in 2016.


They seem to have assembled some (mostly) impressive contestants, although a number of well-known bridge design specialists are notable for their absence. I certainly look forward to seeing the various designs unveiled in due course.
Posted by The Happy Pontist at 11:32 PM No comments: