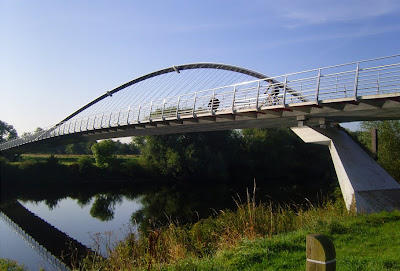 I first visited the York Millennium Bridge several years ago, but had been waiting to get some better photographs before featuring it here. It's a remarkable and fascinating structure, and I'm glad to finally be able to discuss it. 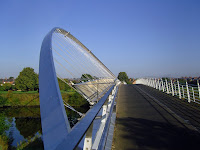 It was built in 2001 for £4.2m, by C Spencer Ltd. The bridge was designed by Whitby Bird, now part of Ramboll. Six years previously, they had designed an inclined arch bridge in Manchester, but the York structure is far more technically daring, if also a little less logical in its conception.

In Manchester, their Merchants' Bridge design had the arch inclining away from a curved deck, such that both elements counterbalanced and reinforced each other. In York, the deck is straight, and the decision to incline the arch is therefore more arbitrary. I don't know who was first to design a bridge of this type, but Calatrava's unbuilt Gentil Bridge of 1988, and his La Devesa Footbridge, completed in 1991, are amongst the earlier precursors. 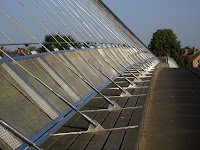 The York Millennium Bridge is 150m long in total, with a main span of 80m. The structural steel deck has a clear width of 4m, and is exceptionally slender at its free edge, largely because its main structural element is a torsion box running along the suspended edge and hidden beneath seating. As well as stiffening the arch and distributing vertical loads on the deck, the box resists the twisting that's caused by out-of-balance live loads on the deck. 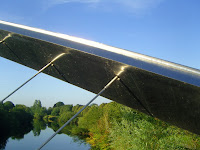 However, the bridge's most interesting feature is clearly the arch, inclined at a very flat 50° angle to the horizontal. Both the arch and the hanger cables are stainless steel, and the arch has a very slender cross-section, at only 200mm deep (it's a welded box, 600mm wide). The cables are staggered so that some cables attach to the front of the box but rear of the deck, while others attach to the rear of the box, but further forward on the deck. This helps prevent the arch from buckling out of plane.

The arch is protected against wind-induced vibration by the presence of two tuned mass dampers.

The arch forms a segment of a circle, which is projected onto the ground as an ellipse and used to define the geometry of approach paths at either end (a nice conceit, but perhaps irrelevant and invisible to the bridge users).

I was amused to read online that a study by the bridge owner suggests de-icing salts should not be used to clear snow from the bridge in winter, because they will accelerate corrosion of the bridge's steelwork. A council officer is quoted:

"In order to make the best use of the limited maintenance resources and not compromise the effectiveness of the coating, the council’s bridge engineer would need to be completely convinced any treatment would not be detrimental and would oppose any proposed treatment involving the application of a corrosive de-icing material."

Well, duh. How did they think they would maintain the bridge when it was built? What is the paintwork on the bridge for if not to protect it against corrosion? Attempting to defer the inevitable repainting of a 9-year old structure may be understandable on pure cost grounds, but failing to keep the structure clear of ice seems a crazy consequence to accept. In any event, there are surely deicing products available which are less corrosive than the traditional road salts. 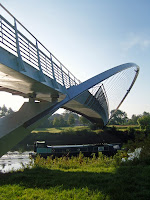 Overall, I think the bridge is attractive and well-detailed. However, the arch becomes somewhat awkward at its junction with the deck. Structurally, it's a tied arch, with the thrust from the arch withstood by the deck rather than by the bridge supports. However, as can be seen in the photo on the right, part of the arch member continues downwards past the deck for a considerable distance. This "tail" is present at both ends, and from some angles is quite disconcerting - it looks like the arch is supported in thin air. I imagine that the detailing of the arch/deck connection was geometrically very awkward, and this is a way of visually resolving it, but it's still unfortunate. 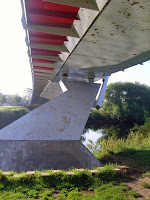 The support pier also seems oddly shaped, to say the least. I suspect the aim is to reduce the visual mass of the pier by incorporating a small corbel at the top (see especially the photo at the top of this post), while doing everything possible to continue the line of the arch thrust to ground. Accordingly, the pier is inclined both towards the arch and towards the river, even though in fact it mainly resists a combination of vertical load and overturning load. Structurally, it's an inefficient arrangement, but I'll bet the more efficient vertical pier (without corbel) would have looked completely wrong.