Bridges in Britain: 1. "The Ancient Bridges of the South of England"

I'm going to make a short(ish) series of posts running through some of the books in my collection which are specifically about the bridges of Britain. My first interest is in gazetteers - is there a suitable guidebook for the travelling pontist? I'm also wondering what, if anything, these books might have to say about how bridges have been viewed culturally over the years.

The oldest of the books dates from 1930: "The Ancient Bridges of the South of England" [amazon.co.uk

], written by Edwyn Jervoise on behalf of the Society for the Protection of Ancient Buildings.

Jervoise has been variously described as an antiquary and an architect, but he was also an Associate Member of the Institution of Civil Engineers, and hence presumably aware of engineering as well as architectural history.

He wrote "The History of the English Bridge", although it never saw print. "The Ancient Bridges of the South of England" was however followed by three more volumes covering the North of England (1931), Mid and Eastern England (1932) and Wales and Western England (1936). In 1938 he co-wrote "Old Devon Bridges" with Charles Henderson.

Jervoise had been asked by SPAB in 1926 to complete a survey of ancient bridges throughout England and Wales, and visited over 5,000 bridges over the course of the following decade (echoing the work of John Leland, whose "Itineraries" Jervoise frequently refers to). The four volumes of "Ancient Bridges", together with the Devon book and another on Cornwall (by Henderson & Coates), present the results of that survey. The South of England book is essentially representative in style and content of all six.

What first strikes me is that the book limits its scope to highway bridges over rivers, and then only those belonging to an age that in 1930 was already very much in the past. The reinforced concrete bridge had been introduced to Britain at Knowlmere Manor in 1903, with several more built until Jervoise's day, with one of the largest in 1928 at Berwick-on-Tweed (the Royal Tweed Bridge). Metal suspension bridges were even longer in the tooth by Jervoise's day. Some forty years after the Forth Rail Bridge had been built, he would have been aware of major new structures such as the Tyne Bridge, opened in 1928.

Few metal bridges are included in his books: the section on the River Thames does include the Hammersmith Bridge, but not the Albert Bridge, nor Tower Bridge, all of them metal highway suspension bridges built in the 19th century. Rail bridges are never mentioned, however historically significant (and at the time, most of the greatest bridges in England and Wales were railway bridges).

The impression is given that Jervoise was obsessed only with the masonry arch bridges of an idyllic, pre-industrial England. It must of course be noted that this was simply the mission given to him by the SPAB. They were concerned at the number of ancient bridges threatened by modern highway construction, and wanted both to record them while they still existed, and also to raise awareness of the need to conserve such structures.

While reading Jervoise's book, I was reminded of "A Book of Bridges" (from 1915) by Walter Shaw Sparrow, who opined:

"About five-and-twenty years ago, when I began in my leisure time to be a pontist, a good old slippered antiquary gave me some hints on what he called 'a discreet fervour in the study of bridges'. I was to choose an English county, perhaps Derbyshire, and for eight or nine years I was to live all day long with the bridges , getting them photographed from many points of view, and recovering bits of their stories from dusty old records and forgotten muniment chests. Then a clay cold book in two volumes was to be written, with a frigid zeal for the accuracy minute data, and with enough glacial footnotes on every page to strike terror into that general reader who does generally read."

That would be a somewhat unfair summary of Jervoise's work (certainly, he's sparing with the footnotes), but it still has some truth to it. "The Ancient Bridges of the South of England" sometimes reads like a stream of consciousness, with facts about bridges deposited one by one but without any overall sense of narrative. Jervoise offers history as an accretion of anecdotes, but is less informative on each bridge's place, if any, in architectural and engineering development.

Lurking implicitly is the sense that these bridges (most of them minor in importance) are significant solely because of their age, or at least because they represent a continuation of the bridge-building traditions of the middle ages, and further back, the Romans. They must be preserved because they are irreplaceable rather than because of their utility. There's little sense that the author would extend the same concern to the historically important bridges on the railways, which have always had their survival dependent far more on their continued economic value.

There's nothing wrong with that aim, as clearly many of these bridges were (and are still) irreplaceable. But their comforting presence in the rural landscape, couple with a barely-hidden nostalgia for a "better age", should not be the only reason.

As a historical record, Jervoises's books are important documents, still referred to in many later books. They're nearly useless as a guide for the casual bridge tourist, and by harking entirely to a rose-tinted view of the past, give no sense of bridge building as an activity of ongoing significance. Jervoise may have had his hands tied by his brief, but there's far more of importance to Britain's heritage bridges than merely the ivy-covered stonework of the masonry arch span. 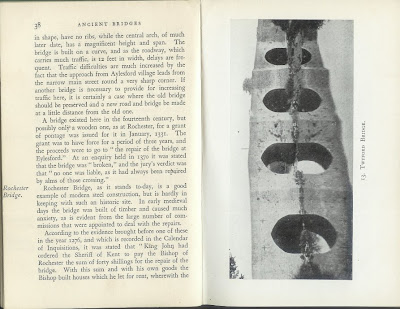