Bridges in Britain: 8. "The National Trust Book of Bridges" 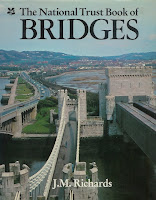 Published in 1984, "The National Trust Book of Bridges" [amazon.co.uk

], by Sir James Maude Richards is, as far as I can tell, the last book about this country's bridges to have been aimed at a general audience.

A book on bridges seems an odd choice for the National Trust, who are better known for their stewardship of stately homes and areas of landscape value. They do own the splendid Conwy Suspension Bridge and Carrick-a-rede footbridge, but their other bridges are generally incidental to the sites and estates they look after. Of those, the iron bridge at Cragside is perhaps the best.

Richards wrote widely on architecture, with books on the architecture of Finland and Japan. Like Eric de Maré thirty years before, he took an interest in utilitarian architecture, writing "The Functional Tradition in Early Industrial Building" (indeed, many of the photographs in the National Trust book are taken from de Maré's "Bridges of Britain"). Richards also edited the Architectural Review for 34 years.

"The National Trust Book of Bridges" is probably the best of the various books in this series, partly because of the breadth of its coverage, which rules out no type or period of bridge, and partly because of its sensitivity to architectural history. As well as chapters devoted to historical periods (the middle ages, the 17th to 19th centuries, and the 20th century), it offers a concluding chapter on "bridges never built". Other chapters cover ornamental bridges, early iron bridges, canal bridges, railway bridges, suspension bridges, and footbridges.

Each chapter begins with an informative discussion, which does a good job of setting the period of history in context and introducing the various designers who played key roles. I particularly enjoyed his section on railway bridges, largely because it gives fair coverage of rail footbridges, many of which are very interesting in their design but which are almost always ignored in other texts. Richards' is always informative - even a committed pontist will find plenty in this book they were not previously aware of.

Each chapter includes with a listing of relevant bridges, arranged by region. These descriptions are sometimes so short as to be frustrating, but include so many interesting bridges that this is forgiveable. Richards is generally scrupulous in crediting architects and engineers responsible for the bridges featured, and giving dates. He states that his choice of which bridges to include is idiosyncratic, but there are few bridges of any note which are missing, and many surprising ones included. He's generally good at making clear why each bridge is of interest, although often his text is dryly descriptive rather than subjective and inspirational.

The photographs are generally very good, and this is the first and only book I'm covering in this series of posts to include colour plates. Together with the text, they give the most comprehensive coverage of Britain's bridges that I've seen. It remains a vital compendium today, especially for its far more positive treatment of twentieth century design than most of its competitors managed.
Posted by The Happy Pontist at 9:52 PM