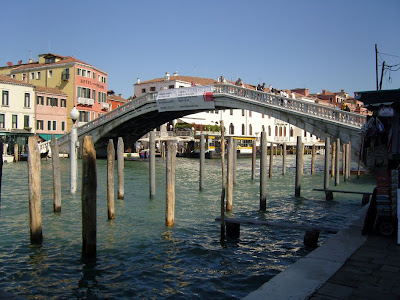 The third bridge to be built over the Grand Canal in Venice was an iron truss structure built near the Venice railway station in 1857. As with the truss structure of the same vintage at Ponte dell'Accademia, it was replaced in the early 1930s with a new arched bridge, the Ponte degli Scalzi ("bridge of the barefoot").

The new structure was built between 1932 and 1934 to a design by Eugenio Miozzi. It is a stone arch span of 40m, rising 6.75m. The bridge is only 0.8m thick at its crown, which is remarkable slender for the type and age of the bridge. Stone was chosen instead of reinforced concrete to avoid future corrosion problems. The construction cost 2.55m lira.

Miozzi adopted an unusual technique in construction of the arch, which he called the "compensatory systematic lesion" method. This involved leaving open joints at the crown and springing, which would close as the bridge's formwork was removed. This ensured that in the dead load condition, the arch was subject to minimal bending effects, greatly reducing the adverse stresses in the stonework.

As with all Venetian arches, containment of the arch thrusts is the key engineering problem, and the bridge is supported on 0.3m diameter concrete piles, both vertical and inclined, along with timber piles. These were tested with horizontal loads prior to construction of the arch.

Today, the bridge may appear at first sight the least distinguished of the four bridges over the Grand Canal. There are, after all, roughly 300 arch bridges in Venice, most of them in stone. However, its attraction is in its simple elegance, especially its slenderness at midspan. It's both beautiful and durable, an illustration that older technologies are often still of great value.

Further information:
Posted by The Happy Pontist at 9:32 PM