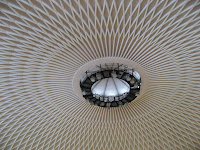 His many astonishing designs include St Mary's Cathedral in San Francisco, the Palazzo and Palazzetto del Sport in Rome (the former is pictured, right, courtesy of Jeroen Meijer on Flickr), the Papal Audience Hall in the Vatican, and exhibition buildings in Turin.

A hallmark of his approach was the use of ribbing to stiffen thin-shell construction, leading to geometrically intricate vaulting reminiscent of the Gothic architecture that Nervi undoubtedly admired.

Unlike his contemporary and compatriot Riccardo Morandi, Nervi is less well known for his bridge designs. Nonetheless, he produced enough of interest that I'm going to cover them in a short series of posts here. 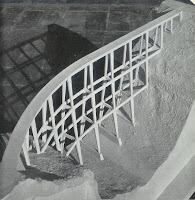 The proposed bridge at the Fosso Biedano was a reinforced concrete trestle viaduct. The A-frame legs stiffen the curved deck against centrifugal forces, while the three levels of bracing serve to reduce the buckling length of the frame columns.

I'm not aware of many concrete trestle bridges which were built: this was a design essentially harking back to the great timber trestle viaducts of the 19th century.

Two decades later, Nervi's plan for a bridge over the river Tenza was equally unconventional. According to The Works of Pier Luigi Nervi, the designer's main challenge was to reduce the amount of scaffolding required for a viaduct which was some 50m above the valley floor. 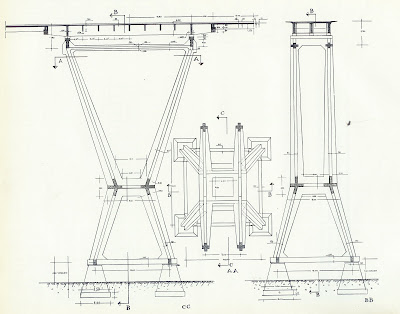 The 319m long viaduct had trestle supports at a maximum 50m interval, four with identical geometry and hence the option to reuse the falsework and formwork. These trestles support main concrete cantilever beams, which vary in width, having a thicker web above their support positions, where the shear is highest.

The cantilever beams in turn support precast span beams, lifted into position from ground level. These span only 16m, sitting on roller bearings on their half-joints.

In 1947, Nervi designed the roof structure for the Conte Trossi Wharf in Genoa, which if not a bridge, was certainly bridge-like. The relationship of the reinforced arch to the "deck" slab above is more than a little reminiscent of Robert Maillart's bridge design at Tavanasa.

Evidently, Nervi supported only the first of these choices.

Hi, I'm doing a 3D rendering of the bridge over the river Tenza for my graduation in civil engineering. I'd like to konw if I can find others designs of this bridge in the book "Pier Luigi Nervi, Ada Huxtable, Mayflower, 1960" (I've already found some designs in "The Works of Pier Luigi Nervi, Pier Luigi Nervi, The Architectural Press, 1957"). Thanks,
Antonio

The elevation of the bridge shown above is from Huxtable. Huxtable also shows a photo of the bridge model from another angle, but that's the only other image.