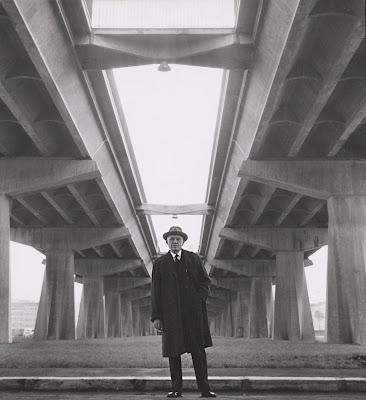 In 1956, Pier Luigi Nervi became involved in a number of structures for the 1960 Rome Olympics. Most notably, this included the two indoor sports arenas, Palazzo dello Sport and Palazzetto dello Sport, and the outdoor stadium at Flaminio. It also included the Via Olimpica viaduct, now called the Corso di Francia Viaduct.

The Corso di Francia runs right through the middle of the Olympic Village. Apparently, it divided the housing for male athletes, to the east, from that for female athletes, to the west, although any notion of propriety was ruined by the use of the viaduct by Italian men to spy into athlete's bedrooms (I don't know how true this story is).

The road had to be elevated to allow free passage of athletes and spectators throughout the site, and the use of T-shaped piers by Nervi may have been an attempt to maximise space at ground level and reduce visual obstruction (see picture left - all colour photos are courtesy of Nicolas Janberg at Structurae).

While the structure is more conventional than the two early bridge designs I featured last time, it still has its share of idiosyncrasy.

The columns have an unusual varying section, from rectangular at the top to a cruciform section at the base. This enhances stability while also adding to the visual interest, and Nervi frequently provided varying columns in his designs. The Palazzetto dello Sport has some, as does his roughly contemporary UNESCO building in Paris.

The beams are 16m long, precast and prestressed, a simple and economical solution for bridge viaducts that seems unusual for Nervi, who was not a great user of prestressing. More unusually, they are V-shaped in cross-section, with a very narrow bottom flange, and with the top flanges placed in contact. The overall cross-section of each viaduct therefore consists of a "corrugated" or V-wave profile, which is essentially similar to the approach Nervi had taken on a number of roof structures, including the Palazzo dello Sport.

Nervi's design for the viaduct is featured in Fritz Leonhardt's Bridges. Leonhardt notes that the bridge did not age well, with water seeping through joints and down the piers (I imagine the deck was discontinuous, as on the Midland Links viaducts in the UK, which have been notoriously plagued with leakage and associated concrete degradation).

Leonhardt also criticises the adoption of column and crosshead piers to support the deck beams. Although this is the most straightforward solution to build, it is visually more congested than the alternative of having the crosshead integral with the deck and within its depth. The latter approach, however, requires temporary propping of the deck beams and construction of a more difficult joint detail.