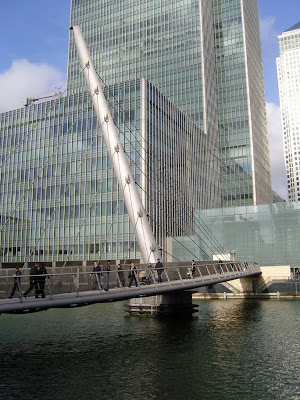 On a recent trip to London, I had time to visit three footbridges. All have in common the fact that they are moveable structures, opening to waterborne traffic; that their design had the strong involvement of an architect; and that they are a few years old now. These are definitely not the latest designs, but they all remain interesting in one way or another.

The first, South Quay Footbridge, was the collaborative design of Chris Wilkinson (now Wilkinson Eyre) with Jan Bobrowski & Partners (now Capita Bobrowski), who won their commission in a design competition run by London Docklands Development Corporation. It was a slightly unusual contest by modern standards: a shortlist of six engineers was invited, and given a list of possible architects to team up with.

In its original form when it opened in 1997, the bridge connected the quay walls of a dock basin at Canary Wharf in east London, providing an S-shaped walkway, each half of the 'S' suspended from an inclined mast. The two masts inclined in opposite directions, and the south half of the bridge could pivot open when water vessels needed to pass through (which was not often).

It cost £2.5m, and was 180m long. The masts were 30m tall, and along with the cables carried a deck supported on one side only by a steel tube. The bridge decking was of oak planks (now long since replaced with metal grating due to the oak's slipperiness). The contractor was Christiani & Nielsen.

It was a masterpiece of landmark footbridge design, a brilliant concept which perfectly met the requirements of the site. I very much enjoyed the first time I visited it, its combination of simplicity and dynamism.

It was always intended that further construction work would take place to narrow the dock, by building a new quay wall on the north side (to the right of this photo), and removing half of the bridge. It was planned that the section removed could be used elsewhere, and this was one of the interesting features of the original design. Indeed, the bridge in its original form lasted barely three years before its span had to be reduced.

The reality, however, is that the bridge was emasculated, and the unfortunate peculiarities of Docklands land development have made its context more problematic. 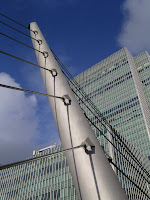 It’s still a striking structure, with the harp-strung mast thrusting priapically into the sky. The mast is circular at its base but narrows at its tip, a forerunner of the more refined mast shaping adopted by Wilkinson Eyre at the much more recent Swansea Sail Bridge.

It seems inconceivable that the bridge's pivot support could be large enough for the deck to remain balanced when it opens. 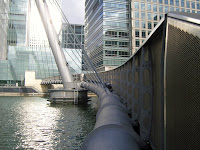 The deck support girder is a 914mm tube, from which the deck cantilevers. The cantilever members are hidden below deck, but their presence is indicated on the tube by a series of "collars", which I think are one of the bridge's less successful details. 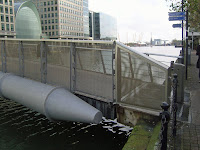 The adoption of two very different styles of balustrade is a feature that has appeared on many Wilkinson Eyre designs. The emphasis is on the walkway’s role as an outward-facing promenade, although at the cost of a somewhat obscured view on the opposite side, where the perforated plate screen is too high for comfort. Wilkinson Eyre described it as a "man-made hedge" i.e. a wind-shield. 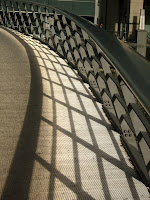 The bridge originally sloped upwards to provide clearance over the middle of the dock water, but now it lands at a level higher than the rest of the dock quay – the slope has no visual rationale any more, and it lands awkwardly onto a set of steps which prevent disabled access, and, more importantly, place a barrier right across the pedestrian desire line. Approaching from the north, it’s uninviting and intrusive.

Presumably there was no space for a ramp, because immediately to the north, the footpath is now blocked by a massive glazed atrium, connecting two offices and sheltering the way down to what appears to be an underground shopping mall. Again, coming from the north, this obscures views of the bridge, negating its role as a landmark, and making the pedestrian experience at best unfriendly, and at worst intimidating.

This part of the Docklands has always been a prime example of the harm done to the public realm by permitting its existence only within the terms of privatised land, and this atrium is emblematic of the negative legacy of the way Docklands development was promoted. Where there should be generous and artful public space, instead there are barriers, security guards, and the resulting consciousness that everyone is an intruder, your presence and passage resented.

This may seem something of a digression, but what was once a splendid bridge has been greatly diminished by the increased corporate colonisation of its context.

I agree that the recent change in its surroundings has had a particularly negative impact on this bridge, but I was never a fully-paid-up fan in the first place. I've always felt it was a lumpen structure with oversized masts that dwarfed the span. With the span cut in half the lumpen-ness is doubled. When it was first built it did indeed look quite striking, but it was surrounded by particularly cheap and nasty buildings which enhanced its appearance somewhat by contrast!

I am a structural engineering student from Slovakia working on a project at my university, which requires the structural analysis of South Quay Footbridge. The problem is that I could not find any other sources or articles/source of information about this bridge besides your blog reference. In your sources you have designated the "Critical Analysis of the South Quay Footbridge, London" pdf file, which is not available anymore, unfortunately. Could you send this file to my personal e-mail lillapapp18@gmail.com, if you still have it? Thanking you in anticipation!

Sorry, I didn't keep a copy of that article, and I also can't find it online any more.