The Fehmarn Belt link is the third super-bridge to be proposed in Denmark (the others being the Øresund Bridge and the Great Belt Link). The bridge proposal is currently being tested against an immersed-tube tunnel alternative, with a decision to be made next year on which will proceed. The three links together connect Denmark to Sweden and Germany across significant stretches of water.

The 17.5km long bridge option is being designed by a COWI / Obermeyer joint venture, with Dissing + Weitling as subconsultant architect (D+W worked on the other two link schemes previously, and COWI worked on the Great Belt). They have just released a set of images (below), and this video:

The bridge has four cable-stayed spans, slung from three V-shaped towers. These support one level of highway deck on truss girders sheltering a lower rail deck.

The V-shaped configuration of the towers is unusual for a bridge on this scale, as the inclined towers are more expensive to construct, and don't help brace each other when complete, as in the more conventional A-frame tower. However, they have been beautifully sculpted by Dissing + Weitling, and look very attractive from most viewpoints.

I'm not entirely convinced about their appearance from the perspective of a moving driver, it looks a little disconcerting, opening attention to the wedge of sky above rather than offering the psychological security of an A-frame or Y-frame solution.

The central tower has double legs, a feature sometimes used on multi-span cable-stay bridges to enhance the stiffness of the pylon and hence the entire system (it was also used on the Rion-Antirion Bridge and Millau Viaduct). It's odd to see it here, as I'd have thought the trussed deck offers sufficient stiffness (as in the design proposals for the Mersey Gateway). 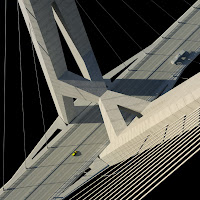 Posted by The Happy Pontist at 9:38 PM