Five finalists have been announced in the ongoing contest to design a wildlife bridge over the I-70 Highway in Colorado. The original shortlist featured 36 entrants.

I've provided a short note below each entry summarising the structual form, but there is much more information on each design at the competition website.

This design involves a series of transversely laminated timber "plates" which are sculpted to give an organic form underneath. It's clearly the contribution of Knippers Helbig as there's a family resemblance to their Margaretengürtel design.

The Happolds influence is apparent in the structural form, which is a weathering steel diagrid (Happolds being known for their expertise in gridshell roofs). Overall, it's shaped as a hyperbolic paraboloid, or hypar (also known as the "pringle"), which provides stiffness through curvature rather than depth. 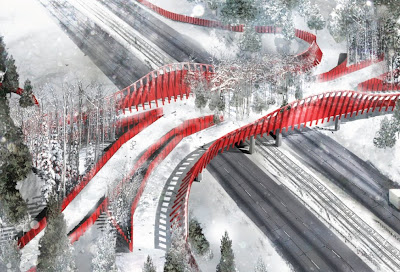 Structurally, this is the least interesting design, featuring a timber and plastic composite deck used to support fibreglass composite screens. Some of the images make the decking look a little like a scaffold platform. 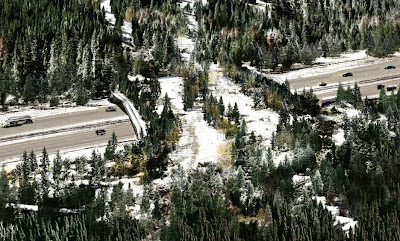 Hypars are clearly flavour of the month, because HNTB have also used them in this design, although in a very different way to the Happold entry. The bridge has a series of precast concrete ribs, each of which is made up of a thin concrete shell in hypar form. L-shaped ribs are propped against each other to form three-hinged arches, which would be both lightweight and stiff. The ease of erection, and adaptability to different spans and geometries, make this one my favourite, although architecturally it's less spectacular.

Finally, here's another hypar, this time in the form of an in-situ concrete shell. Thin shells of this type are rarely used in bridge construction, partly because they perform well when subject to evenly distributed loads, and less well against concentrated loads. A wildlife bridge, with its plentiful earth fill, is a rare case where the geometry makes sense. However, in-situ concrete is problematic, and the designer has had to illustrate a complex temporary cable net, suspended on stays, to support the formwork. This might add an unwelcome cost as well as cause greater highway disruption than some of the alternatives.

Does the Olin studio think the unprotected columns are going to hold the bridge up?

Can the animals sense the thin concrete shell bridge or the laminated timber planks grown organically in a meadow on the slopes of an east African game preserve?

It seems like I could lay soil on any type of beam bridge...

I guess what I'm saying is the animals don't care what the bridge looks like. So the bridges are really for the tourists and the top views are unnecessary..

Man, I have hit a negative patch..