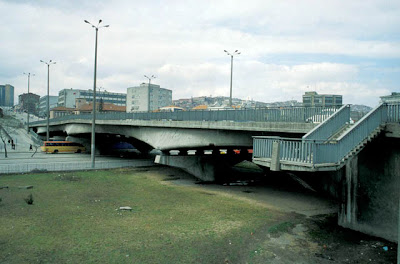 Considering its highly unusual structural form and very site-specific arrangement, you might think that Pier Luigi Nervi's Ponte del Risorgimento, in Verona, was a one-off.

Surprisingly, you would be wrong, as Nervi elected to essentially repeat the design concept for a highway interchange in Ankara, Turkey, designed and built in the period from 1968 to 1973. The structure carries a highway across the Ataturk Boulevard, with associated slip roads.

The bridge deck is completely divorced from its supports, which are essentially twin T-shaped piers distorted to an extreme. The pier stem and crosshead morph into near-triangular masses, allowing the "crosshead" to be kept very slender at its end point. The skin of the piers is far more organically curved than in most of Nervi's column designs, but it all looks quite incongruous, a curious blend of the squat and the skinny.

The tightly curved interchange slip roads are quite different in form to the main spans. These sit on a series of bizarre supports which combine the attributes of a cone and a cruciform section, clearly intended to minimise use of concrete while maximising stability. Nervi had used cruciform section columns in several other structures, including the Corso di Francia viaduct, but I think the Ankara version is unique.

Great series, HP. Nervi has some odd but interesting designs!

The supports, the curves, its madness! Still it looks like fun...