Following the Corso di Francia viaduct, Nervi designed a 160m span roof support structure for the Burgo Paper Mill in Mantova in 1961 which was clearly bridgelike, if not actually a bridge. The picture (courtesy of Michele Molinari on Flickr) shows one half of it, and it has the same form as a suspension bridge (the half not shown in the picture is symmetrical).

In 1962, Nervi was asked to prepare bridge designs for the Kaiser Steel Company in San Francisco. He developed both steel and concrete designs for an elevated highway, pictured below: 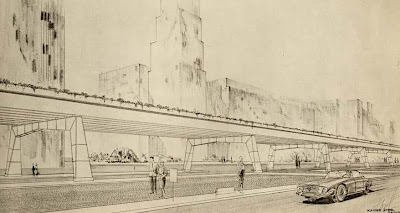 This concept shows Nervi's usual concern with the shaping of the bridge pier legs both to achieve structural efficiency and also improved appearance. The portal legs are more attractive than the T-shaped supports for the Corso di Francia Viaduct, but it's certainly not an especially innovative design.

The following year, California's Department of Public Works invited Nervi to submit a proposal for a bridge at San Mateo Creek, some 550m long and up to 76m tall. 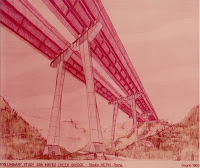 It's worth comparing this to Nervi's 50m tall River Tenza Viaduct design of eight years before, with its peculiar reinforced concrete trestles. Perhaps the experience at Corso di Francia had allowed Nervi to determine that elevated viaducts didn't require oversized frames to provide their stability, and that a more conventional bridge pier arrangement could be made to work.

However, the San Mateo Creek still has hangovers from the early days of concrete design, such as the use of hinge joints at the base of the pier legs and between the two crossbeam elements. Hinges were normally adopted in reinforced concrete either to make the design calculations easier, or to facilitate differential movement e.g. caused by mining-induced ground settlement. It's hard to see why they were adopted here, in a seismically active state, since Nervi had dispensed with them for the Corso di Francia Viaduct earlier.

The bridge deck illustrated also seems to be the V-shaped beams Nervi had used at Corso di Francia, although the picture is unclear.

A recent book on Nervi's works, Architecture as Challenge, lists Californian proposals by Nervi at San Mateo Creek, Fort Sutter Viaduct and Embarcadero Viaduct, and pictures a further design with giant X-trusses which might be a double-decker viaduct.