I've got one final bridge design by Pier Luigi Nervi to cover in this post and conclude this series.

At the end of the 1960s, Nervi was amongst engineers asked to propose a design for a bridge across the Messina Straits, between Italy and Sicily. The depth of water in the Straits meant that the bridge had to cross about 3km in a single span (although other designers, such as Leonhardt, were still proposing designs with deep-water piers at the same time - see the book by Richard Scott linked below).

Nervi's contemporary and compatriot Sergio Musmeci proposed a peculiar suspension bridge where the suspension cables are hung not directly from towers, but from cable stays which are in turn suspended from super-towers beyond the ends of the main bridge. Musmeci's idea included lateral cables either side of the deck to provide it with transverse stability. 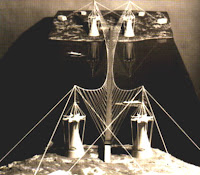 Although this was an odd design, the proposal by Nervi was even stranger.

Nervi sought to achieve lateral stability by inclining the main suspension cables away from the deck, so that the deck hangers are no longer vertical, and the towers supporting the main cables are separated by a considerable distance.

The towers are hyperparaboloid concrete shells capped with enormous steel assemblies. They're restrained by stays to resist the incredible horizontal forces they would have to carry.

It's hard to imagine how Nervi thought this bridge might be erected. The main cables would have to be aerially spun with a conventional vertical sag, and then additional horizontal cables slung between them in order to pull them into the correct inclined alignment, at which point the deck segments could be fixed in place. I can't imagine how it could possibly work on this scale and the design is therefore, at best, fanciful rather than pragmatic. 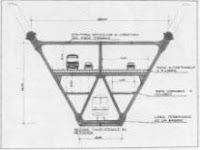 The deck itself appears to be a trapezoidal concrete box which would be incredibly heavy and attract enormous wind loading.

On the whole, Pier Luigi Nervi was not a great bridge designer. Few of his ideas were taken up by others, largely because his attempts to maximise material efficiency were always at the cost of construction complexity, leading to greater cost overall. They also weren't always successful aesthetically.

In February I made a series of posts on the bridges of Eduardo Torroja, another concrete shell innovator, and whose bridges, like those of Nervi, are far less impressive than his better known designs. Was there something about the dedication required to become a master in one field that inhibited their intuition in a second field? None of the other great shell designers (Candela, Dieste, Isler, Hossdorf) seems to have left behind any great bridges either. If anyone has a counterexample, I'd be interested to hear it!

This is the first time I leave a comment and I'd like to take this opportunity to congratulate you for your amazing blog, whic is a reference in bridge world.

The reason of my comment is to show my disagreement with the last paragraph, specially about what you writed about Torroja's bridges.

I partially agree with you that the concrete shells of "Hipódromo de la Zarzuela" and "Frontón Recoletos" are probably the best works of Torroja, analyzed from multiple point of views: structural, aesthetic, innovation.

But theese works were made in collaboration with architects, and I think Torroja alone by his own wouldn't achieve this final result that made theese building a world reference in construction history.

In my opinion that's the reason why Torroja's bridges aren't works as complete as the buildings mentioned above.

However I don't totally agree with your comment because I think is a little bit unfair with his skill or mastery in structural design.

In my opinion Viaducto de Martin Gil and Acueducto de Tempul are master pieces, specially if you consider the economical, historical and social conditions where they were built in.

I would say that Torroja applied at least the same talent, but surely much more effort to solve the construction of theese bridges. Martin Gil Viaduct was a world record for a time (Sando Bridge is not comparable because Martin Gil Bridge is for trains and Sando Bridge is a roadbrigde).

Tempul Aqueduct is one or the first cable-stay "bridge", but we have to take into account the high loads of an aqueduct that gives an extra credit to this work.

Martin Gil Viaduct was built 3 years after the spanish civil war (and during the second world war). Thus the technology and economy of that moment were really difficult, and that's why the construction process was so complex, because Torroja had to use the steel of reinforcement to substitute the falsework? (apologies for my english).

As regards to formal design of Torroja's bridges, I'll say I'm not a fan of (but I do realy like the contemporary Maillart's arches). In a light defense of Torroja's bridges, I would say that modern design of bridges began after second world war and our cultural criteria about what is beautiful or not in bridge forms are completely different from that of Eduardo Torroja's "age".

I'm sorry for the size of my comment. Congratulations for your blog.