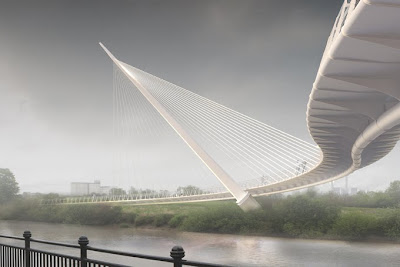 Design proposals have been published for a new pedestrian bridge in Gainsborough, designed by Houchell Studio and TALL Engineers. The 276m long bridge has an estimated construction cost of £6m. That strikes me as a little on the light side, comparing for example the not entirely dissimilar 315m long Derry Peace Bridge which has a price tag of £8.7m.

The bridge is S-shaped in plan, and suspended by cable stays from two symmetrical pylons. The South Quay Footbridge comes to mind as a possible precursor, although that was a swing bridge. What's perhaps most striking about it is the very shallow inclination of the pylons, which seems at least visually to be lower than might normally be expected.

The deck is to be shared by pedestrians and cyclists, and the bridge provides a link in a circular route including riverside paths.

The client, Gainsborough Stakeholder Network, currently has no money to build the bridge, and is now seeking sources of funding.
Posted by The Happy Pontist at 11:11 PM