The first day of the IABSE study tour had been pretty marvellous - great scenery, great bridges, great company. But it was very much run into second place compared to the excitements of the second day.
As with the first day, there was plenty to see from the coach to indicate that the Swiss have engineering accomplishments to be proud of. Driving from Zurich to Schiers, we passed below the 1965 Bircherweid stressed ribbon footbridge designed by René Walther, for example. Driving from Schiers towards Klosters, we stopped at a reinforced concrete vierendeel truss bridge (apparently the only one of its type in the country) for a quick look. And of course the Alps are riddled with spectacular road tunnels, avalanche shelters, funicular railways etc. 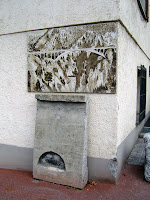 The first stop of the day, Robert Maillart's Salginatobel Bridge, was the only structure in the entire trip to be properly signposted, with brown tourist signs (Rossgraben did have some less visible signs, and both it and Schwandbach have tourist information boards). It was also the only bridge that seemed to have an entire cafe dedicated to visiting pontists: the Prättigauerhof in Schiers. You can stay overnight, eat pizza, drink coffee in this 1627 building.

Or just admire the various artefacts on display. Tourists stopping off en route to the bridge can examine detailed construction drawings, a model of the formwork, souvenir lumps of concrete taken from the bridge (presumably during its refurbishment), and inspect an original section of the bridge parapet. Sadly the Prättigauerhof didn't have any copies of Andreas Kessler's locally published book Vom Holzsteg zum Weltmonument - Die Geschichte der Salginatobelbrücke, let alone any souvenir t-shirts. I had to settle for a postcard.
Writing about the Salginatobel Bridge when it was presented with an International Historic Civil Engineering Landmark plaque in August 1991, David Billington said:

"Such structures remind us that in this fragmented world, a highly rational, deeply educated engineer can integrate utility and beauty and bring into being objects to which all engineers must make at least one pilgrimage in their lifetimes." (Structural Engineering International 4/91)

So: a marvellous mecca for engineers, or just a nice lump of concrete neatly set off by the lovely landscape? 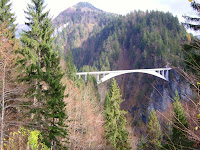 It took some time to get around Salginatobel Bridge. For one thing, there were plenty of places to view and photograph it from - on top, underneath, from the road at one end, and from a viewing platform at the other end. But no amount of rushing around could distract from a palpable sense of awe that grew the longer I stayed there. Billington is right: this was an almost religious experience, which caught me quite by surprise.

The design of Salginatobel bridge is undoubtedly excellent (although not quite perfect - see below). And the setting, 90m above the bottom of a deep valley, with forest to one side and gnarled rock to the other, is magnificent. Photos struggle to do justice to its promethean splendour - you have to be there with the mountains to all sides to really understand how great this bridge is. Many photos of the bridge nestling amongst the forested hillsides fail to give any idea of its scale - it's a big bridge in this context, making it even more remarkable how good it looks. 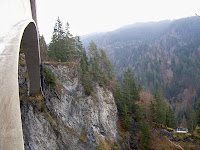 It's a great example of how the introduction of a bridge can transform relatively ordinary scenery. Sure, it's grand scenery, but there are far more spectacular gorges and mountains throughout the rest of Switzerland. Without the bridge, this would just be one of many pretty mountain valleys. Salginatobelbrücke literally makes concrete the pervading spirit, the genius loci, of this particular valley, as if rocks layed down a hundred million years ago had just been waiting patiently for a bridge to one day vault majestically outwards.

Like many great bridges, what you can see is only half the true story. Excellence in bridge design is as much about how a bridge will be built as how it will look. Without Richard Coray's audacious timber centering, the 90m span of Salginatobel Bridge could never have been built. In 1930, Maillart won the job because his was the most economic solution, and it's unfortunate that this would no longer be the case. Now, a prestressed concrete structure or welded steel bridge would be much cheaper, and both lead to structural forms suited to factory production or repetitive site assembly, certainly not an arch requiring major temporary works. A bridge like this is unlikely ever to be built again.

So where are its flaws? The masonry abutments certainly detract, and the solid concrete parapets give a heavier appearance than at Rossgraben (but not terribly so). However, I think it would be quite frightening standing on Salginatobel and looking down 90m if the parapets were only of the post-and-rail type (it's okay less disconcerting at Rossgraben because the drop is only about 12m). 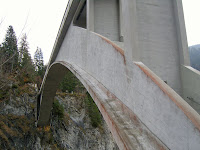 Of course, although the arch shape looks like it has been precision-engineered to match the bending moment diagram for a three-hinged arch (see diagrams linked below), it's the perfect shape just for one very specific (and unlikely) arrangement of loads. Robert Maillart realised this and changed the shape of his later three-hinged arch bridges, but the less logical shape at Salginatobel undoubtedly looks more beautiful.

As at Rossgraben, if you look along the arch at an acute angle, there seems to be a reverse curve towards the springings, an illusion created by the way the arch widens at its ends. 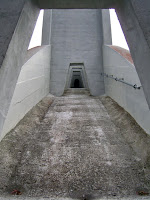 The original bridge design also dates from a time before concrete's long-term durability was well understood - there was no waterproofing, minimal cover to reinforcement, poor quality concrete and inadequate drainage. These were all put right with repairs in 1975/76 and a US$1.3m refurbishment completed in 1998, including complete replacement of the parapets (which is why there's a section of parapet outside the Prättigauerhof). The engineers did a remarkable job on the repairs, blasting off and then shotcreting most of the concrete surface. Unusually, formwork boards were then applied to the shotcrete to reinstate the original appearance.

The flaws are pretty irrelevant. It's as much the glorious setting as the bridge itself, but Salginatobel Bridge remains Maillart's masterpiece, a truly singular sculpture in reinforced concrete that must rarely, if ever, have been equalled. We had a busy day ahead and were already running late, but it was difficult to tear ourselves away - I would have been quite happy just to stay there for another hour drinking in the view, or exploring the bridge more closely.

It was lucky the bridges still to be seen would prove to be Salginatobel Bridge's equal, in their own ways.

Thank you for your blog. A friend from work just showed it to me and love it already.

I recall an episode from my trip to Salginatobel Bridge last year: there was a sign at the bottom of the arch, that read “no trespassing” in English. But there was a German text underneath that translates “enter at your own risk”. I’m not sure if that is even true and I did not take a picture if that sign, but that is how I remember it.

Of course we walked up that arch.
It was very impressive. One of my friends (a student of Architecture) took some pictures. There are some on his website, if you are interested: http://www.michaelcerrone.com/