In 1961, the town of Verona held a design competition for a new bridge across the River Adige, partly to celebrate the centenary of Italian unification. Apparently, the results were uninspiring, and set to one side. Two years later, Pier Luigi Nervi was invited to prepare a design, which went on to be built, opening in 1968. The bridge was built by Edilbeton, who offered a lower tender than Nervi's own firm, Nervi e Bartoli. 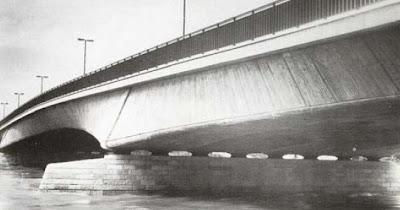 The river is 131m wide, and Nervi proposed a three-span bridge with a central span of 62m and two symmetrical side-spans of 34.5m each. This partly echoed the existing upstream bridge, Ponte Catena, which had three roughly equal arch spans. It's a cellular reinforced concrete box girder, with its cross-section varied in response to the bending moment and shear force envelopes.

The soffit is curved to enhance the girder depth at the bridge piers, where the hogging bending moment (and also shear force) is greatest. The bottom flange thickness also varies, increasing at the piers to carry the resulting increased flange compression force. These are both concepts common to bridges of this type.

However, Nervi also varied the width of the bottom flange in response to the moments, so that is wider at the piers, where greater compression capacity is required, and narrower at midspan. The top flange is kept at a constant width, so Nervi created a bridge where the slope of the side walls varies continuously.

At the piers, the cross-section is of a trapezium with the bottom flange wider than the top, while at midspan, the reverse is true. 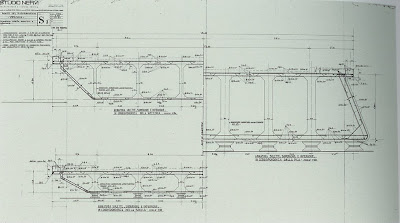 There is a hydraulic as well as structural logic - the side wall of the deck juts out above the piers to form something like a cutwater, helping to divide flood flow and creating a downward thrust under flood. The shaping at midspan may reduce hydraulic drag under flood conditions.

To the modern engineer, the varying girder depth and flange details are sufficient for an economic design - the curved side walls, shaped as hyperbolic paraboloids, require expensive varying formwork, and make detailing of the internal reinforcement more difficult.

Personally, I'm not sure that the visual effect justifies the effort. It's an intriguing design, but not so startlingly attractive as to make the cleverness seem the result of necessity rather than whim.