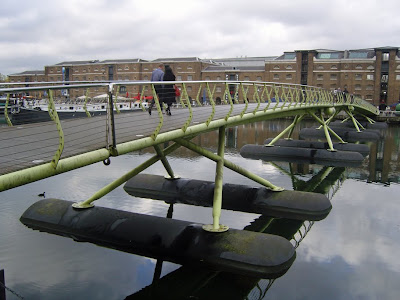 South Quay Footbridge lies a short distance south of One Canada Square, the pyramid-topped tower at the heart of Canary Wharf in London’s Docklands. Walking north from it, you’ll pass the spectacular man-made cavern that is the Canary Wharf underground station, then One Canada Square itself. The Docklands Light Railway threads itself awkwardly between, around and even through the various office buildings.

Just to the north of this, the streetscape becomes slightly less oppressive. At West India Quay, some of the original dockside buildings have been preserved, and they are considerably more human in scale (and pleasing in appearance) than their more recent commercial neighbours. This change in pace is also signalled by a footbridge which is as modern as the South Quay structure, but significantly less ostentatious.

West India Quay Footbridge was designed by Anthony Hunt Associates (now part of SKM) with Future Systems (now Amanda Levete Architects), joint winners of a design competition. Opened in 1996 at a cost of £1.7m, it was fabricated by Littlehampton Welding. 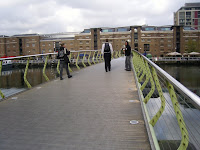 The bridge is 94m long, and the main structure is a U-shaped steel spine beam, 750mm deep, with edge beams supported on cantilevering outriggers which form a triangular bracing in plan. These support stainless steel balustrades (with lighting in the handrails) and aluminium decking (with uplighting in the deck). The spine beam provides the main resistance to torsion, and in his book 30 Bridges, Matthew Wells suggests that the architect refused the engineer's request to add edge cables which would enhance the torsional resistance.

The bridge legs sit on 2800mm diameter floats, more than a little reminiscent of a flying boat. 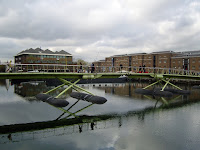 It has an opening section in the middle comprising two bascule leaves, although as at South Quay I suspect it has opened only infrequently. It has often been likened to an insect skimming across the surface of the water, perhaps a pond-skater, with its slender deck supported on quadrapod frames. The effect is essentially modest, even peculiarly innocuous. 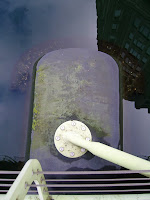 The bridge’s most unusual feature is that it is a floating structure, capable in theory of being untethered from the quayside and moved elsewhere to suit changing development. In practice, it has not moved since being installed, and the floating tanks which carry its legs are anchored to the dock basin’s floor by tension piles.

Future Systems, now defunct, were famous (or perhaps notorious), for their liking for blobitechture, organic in form, the realisation in steel and concrete of forms better suited to amoeboid protoplasm. This, and their interest in idiosyncratic colour choices, gave many of their designs a distinctly science-fiction feel. Apart from its puzzling lime-green colour, West India Quay Footbridge is largely immune from this tendency, with a relatively straightforward structural form (for the opposite extreme in their bridge design, see their unbuilt Glasgowbridge design, featured here previously). 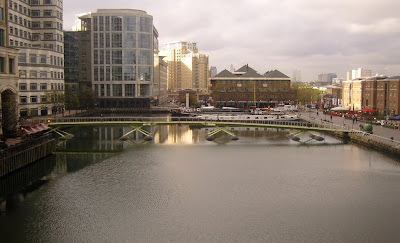 I like the West India Quay bridge. It’s unpretentious, light in appearance, and generally well-detailed (see for example the simple counterweights to the opening spans). The fact that it floats may appear with hindsight to be an unnecessary contrivance, but I think it’s an essential element in the bridge’s charm.

I would love to try and float the bridge down the river.

One of the most charming bridges I have ever seen. A flying car would look good crossing the bridge.

One of the most charming bridges I have ever seen. A flying car would look good crossing the bridge but I like it so much This is very good side Thanks MA 03327043387