In April, the winning design was made public for a new footbridge across the River Foyle in Derry, Northern Ireland. I didn't cover it here at the time but I've been looking at some of the design images, and it would be a shame not to feature it.

The bridge (which will cost £8.7m as part of a wider £13.3m project) is part of a regeneration scheme masterminded by ILEX Urban Regeneration Company. 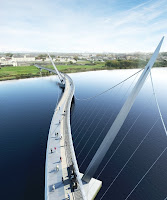 The winning scheme is a design-and-build tender from contractor Graham, with design input from Faber Maunsell and Wilkinson Eyre. Their bridge is a 315m long, 4m wide self-anchored suspension bridge, curved in plan to follow an S-shape. The main span is 101m.

The construction cost works out at about £7,000 per square metre, which is pretty normal for a landmark footbridge and compares favourably with Wilkinson Eyre's new footbridge in Stirling (which costs twice as much). While you can't evaluate a bridge's merits solely on cost, value for money does matter, particularly for a regeneration project (the reality, however, is that most such schemes are not funded by the end-client, and scrutiny of value-for-money is generally absent).

The bridge has obvious echoes of one of Wilkinson Eyre's earliest bridge designs, the South Quay Footbridge in London, which shares the S-shaped plan and inclined masts, but was a cable-stayed rather than suspension bridge.

ILEX state that bridge construction will commence in September 2009, to be completed in October 2010. That's an optimistic programme for a bridge which will be complex to design and difficult to build. Self-anchored suspension bridges are a relatively rare choice, as unlike the more popular conventional suspension bridge (or the cable-stayed option), they are not structurally self-supporting until the deck and all cables are complete. This is because the main cables rely on the deck to anchor them. In contrast, a cable-stayed bridge can be built in segments, and a normal suspension bridge can have the cable completed in advance of the deck.

The consequence is normally a need for substantial temporary support within the river, and for a bridge with unusual geometry such as this one, more careful consideration of the cable connection and stressing requirements, and associated deck precamber.

The bridge form is envisaged as a "handshake", whereby two separate self-anchored structures are overlapped at midspan, and I think it's a very attractive design. The curves of the suspension form are softer and lighter than a cable-stayed solution would have been, and it also allows the overall height of the bridges to be lower and less overbearing.

There were four other tenderers, but I haven't seen details of any of the losing designs. If any become available (or are sent to me at happypontist at googlemail dot com), I'll post them here.

Posted by The Happy Pontist at 8:01 PM

The interlocking arms image is simultaneously cloying and banal. This is not so sophisticated a design that its [in]efficiency needs graphic interpretation and it is a dull metaphor if intended to reflect the relationship between the two communities in Derry/Londonderry. I wonder how many Peace Bridges exist around the world?