So, tensegrity bridges. The Rome, Washington and Brisbane bridges are the major examples I've found, but there are one or two others to briefly mop up.

Bankside Bridge
This was a proposal for a crossing of the Thames as part of the Millennium Bridge design competition. The engineer was Mott MacDonald, I've been unable to confirm the architect. I have no information other than these two images:

St Petersburg
As part of a redevelopment proposal for the Apraksin Dvor area of St Petersburg, Wilkinson Eyre have proposed both a tensegrity roof, and a footbridge over the River Fotanka supported by a tensegrity "cloud". Again, no real details other than this picture:

Deployable bridge
This forms part of a thesis under preparation by Landolf-Rhode Barbarigos, who has a blog devoted to tensegrity structures. It incorporates "active" members (e.g. pulleys or telescopic bars) which help it find the right shape as it is deployed.

Bamboo Bridge
Designed by architect Michael McDonough, this is an unbuilt proposal for a 133m span bamboo truss bridge in Mendocino, California, described as using tensegrity principles. From the pictures, it's far from clear that it's a tensegrity bridge at all, looking more like a modularised cable-truss bridge incorporating some additional cable elements for stiffening. 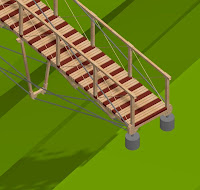 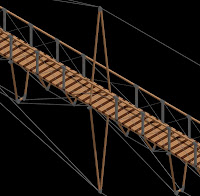 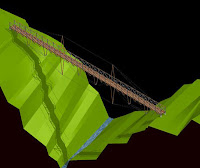 Tube Bridge
Andreas Kirchsteiger has come up with a concept for a tubular bridge comprising rings connected by woven fabric (reminiscent of Cecil Balmond's Weave Bridge, perhaps). The support struts connect to the rings, but otherwise it's closer to the pure tensegrity idea than some designs. I can't really see how it would work - how are the rings stressed together, and how is overall bending actually carried?

Footbridge using "Simplex" modules
This was proposed in a thesis by Valentín Gómez Jáuregui, and is intended for lightweight short-span modular footbridges. 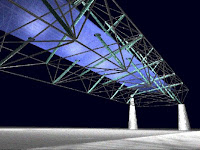 So, that's it for this series of posts on tensegrity bridges. How can I summarise? Firstly, it seems likely that a structure complying strictly with tensegrity principles (no two touching struts) is unlikely ever to be suitable for a real footbridge. Secondly, that tensegrity can be taken either to inspire a fairly orderly and visually conventional cable truss structure, or used as the jumping off point for chaotic visual complexity. This shows how central is the designer's choice in adapting any structural system.

Over half-a-century after it was first conceived, tensegrity still throws down a huge challenge to the structural designer - conventional habits of design, both in terms of structural analysis and visual order, simply aren't sufficient.